The Story of Sonja

Everything is in a name.

Still on China's side, on the border of China and Russia, the Chinese immigration officer asked me a few questions I have never got in my previous trips in other countries as well in four previous trips to China. One of the questions was:

"How do you spell your name in Russian?"

I thought I looked very much like any of these guys in dark green eery uniforms. Instead of asking whether I had a Chinese name... ! I stared at him. With my Indonesian passport in his hands, he stared back.

And then when I was in Birobidzhan (Finally, successfully, crossed the border!) a lady asked me my name. After I told her, she paused for awhile.

Straight from that moment I liked the name. Sonja. Next time, yeah yeah yeah next time! When a Chinese immigration officer asks me what my Russian name is, I'll tell him, it's Sonja!

When I was a kid, Mom and I loved to watch gymnastic games on TV. Our eyes would be fixed tight on the screen when it came to athletes from Russia. Normally Mom's regulation for me is to be in bed by 9:00 PM. However, when there were Russians ice skating on TV, the rule was meant to be broken.

Years went by. I got a scholarship in Japan. Next to our computer room was a research room. Most of the time, there was only one person studying there. The rest of us preferred to study in the computer room, the library, in our room, or in the lobby. It's not certain why, but one thing for sure, entering this research room was like stepping into a refrigerator. That only one person seriously studying here day and night was Russian. She spoke zero English.

One day, my Kyrgyzstan friend who quickly befriended her, interpreted her story for me. In Russia, she said, there's a lake that freezes all year long. To her, this room is just warm.

Wow. In my country, I have to drink my ice coffee quick before the ice in my glass disappears. Now, a lake, can stay "ice" all year long? Isn't that great? The impression of Russia stuck even harder inside my head since then. Russia, the place where a lake freezes all year long. I want to go to Russia.

January 1st 2012 in Kuala Gandah (Malaysia), I met a Russian family with whom I shared a car into the park. You can't imagine how thrilled I was when Andrey uttered the word "Russia" to my question of where he was from. Little did I know that two years later, exactly on the same date, I would be in Russia for my first time.

May I take you with me to Russia, a freezing country filled with warmhearted people. 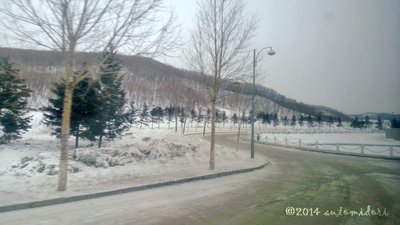 The view from my bus window on the border of China and Russia.

Next Table of contents