Sonja's worst Russian experience and hopefully the only, ever.

After walking up and down the streets framing the wooden houses into my memory card, lingering at the crossroad for trams and buses to pass by one after another, feeding myself with blini and ice cream, shopping for tomorrow's food supply on the train, I walked the alleyways which is something I love to do when traveling. Looking around at the houses, at the people doing their daily chores, gives me the sense of real life in the place I visit.

A police car pulled over in front of me. I looked around, nobody, nothing.

By then I had already learned that when Russians say or write bla, bla, bla document, they mean passport. So I took out my passport, opened the page with my identity, and then the page with my latest Russian visa, before handing it over to the policeman. Based on previous experiences also, foreigners even at the immigration don't know how to read my passport.

The policeman took a look at both pages, but, "Houskvousk rousk vousk, Irkutsk visa! Houskvousk rousk vousk, Irkutsk visa!" The only words I could comprehend was "Irkutsk visa". I pointed on my second Russian visa. The policeman shook his head hard. He pointed on a word written there and repeated "Moscow! Moscow!" Ah... yeah that Cyrillic word there does look like the word "Moscow". In an instant thought, maybe that means that my visa is approved by the authorities in Moscow. Moscow is after all the capital city of Russia, isn't it? Doesn't this policeman know that?

While he kept on repeating "Irkutsk visa", I took out my train tickets. On the other thought, maybe this policeman wanted to check whether I was registered or not. But my host in Krasnoyarsk told me that I didn't need to be registered if I stay in one city for less than 7 days. He suggested me to keep my train tickets as proof that I have never stayed in one city for more than 7 days.

Another policeman got off the car and walked to us. He didn't point his riffle at me, but! He kept on pulling and loosening the trigger krrekk, krrekk.. which made me fell threatened. A thousand thoughts ran through my head. Are they unhappy because of my taking pictures? But, if so, why don't they check my camera? They mention nothing about camera, not even touch or look at it. So, what's wrong?!

"Moscow! Moscow!" The policeman kept pointing on that word on my visa.

The first policeman who interrogated me closed my passport and signaled me with his curled pointing finger to follow them into the car. Honestly, I had mixed feeling about this. Frightened, yes. Mad, yes. I felt I had done nothing that I deserved to be treated that way. Excited, yes too. It would be an experience to know what a Russian police office look like. But I just want to have a look, not stay. Uhm. I already moved one step forward for "Fine! Let's go!" then stopped.

Another policeman got off the car. Now, this turned my feelings to 70% mad rather than frightened. Or are these fake policemen? That third policeman took out his blade! He didn't pointed it at me, but! Swinging it up and down in front of me?? What is he trying to tell me?!?

"I told you, I entered Russia in Novosibirsk, not in Irkutsk!" I opened the page with the immigration stamp from Novosibirsk. The policeman with a blade grabbed my passport and turn the pages. He took a look on the first page with my identity.

"Houskvousk rousk vousk tourist. Tourist." That policeman with a blade pointed on my visa page. He handed back my passport and turned away. The policeman with a riffle followed. The first policeman turned back the last. He seemed reluctant. Inside the car, he turned his head at me until their sight faded away. 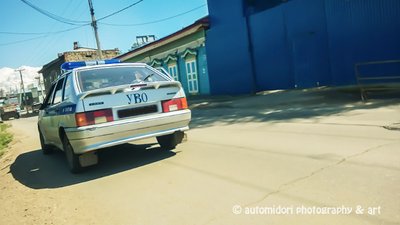 With my Lumia on my waist, I made a snapshot of their car. Phew and aaargh.
P.S. I have blackened the license plate number.