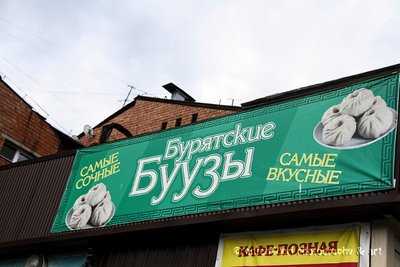 Look! It doesn't take much knowledge about China to recognize this as Chinese food. Then if one is familiar with Chinese culture, the border of this banner says: Chinese, confirmed. For me, it's extra interesting. That "kue", you see? "Kue" is an Indonesian word for "cake" which is derived from the (Chinese) Hokkian language. I have been guessing the meaning of the word before "kue". It looks like "Buryat", the people of Buryatia Republic. Quoting from Republic of Buryatia's website here:

Before the annexation of East Siberia to Russia, the vast area on both sides of Lake Baikal belonged to the northern outlying region of Mongolia.

To me, this banner is like an inscription describing history of thousand years. Was steam bun originally from Mongolia introduced to China and then to Indonesia? Maybe all the time I thought it's Chinese whereas it's actually Mongolian. 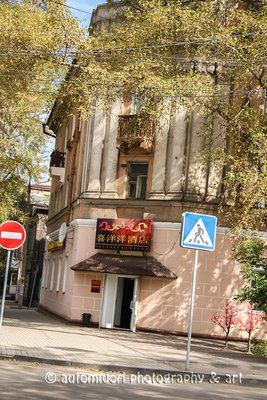 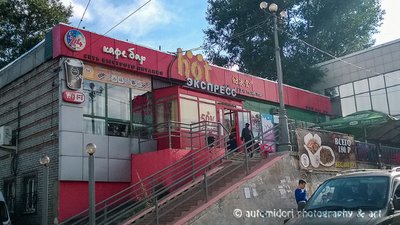 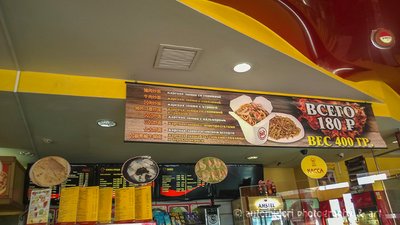 This restaurant is located across Irkutsk Train Station and across my hotel as well. The first day I arrived in Irkutsk, very unlike in previous cities, (Chinese) taxi drivers approached me in Mandarin offering a ride. 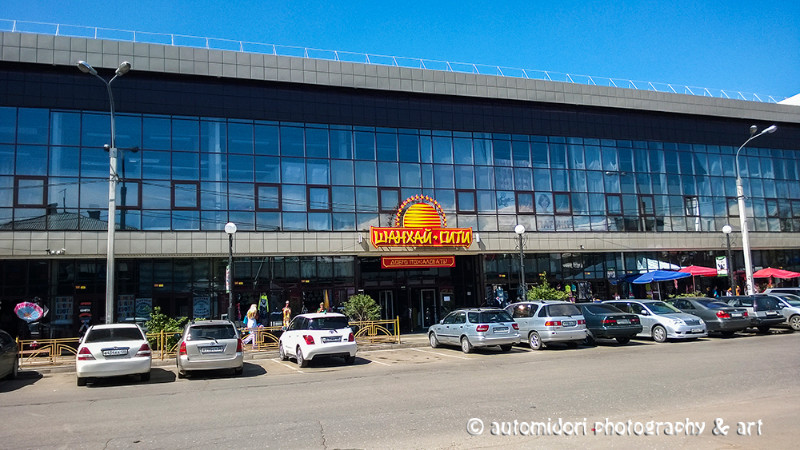 A Chinese shopping center, this is. I didn't enter, but I'm sure. That yellow and red sign explains enough. Oddly enough, a Christmas song played through the loudspeaker. 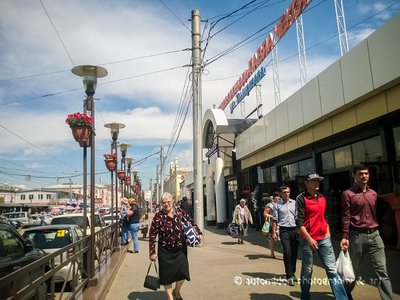 To this one I did go inside. In my hometown, it would be "Petak Sembilan". For me, it didn't feel Russian at all inside there. Not the least. Chinese vendors chatting with fellow vendors in Chinese, the way they sat in front of their shops, the way they hung their stuffs for display... it couldn't be more Chinese than that. 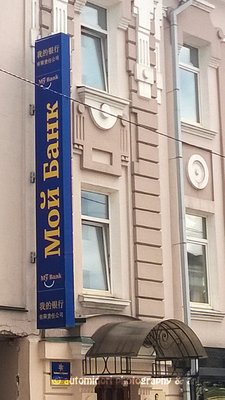 Purpose of shooting? The signboard is also written in Chinese.

I don't have any proof. However, I highly assume that those policemen were looking for a Chinese lady. Then the third policeman who carried a blade told the first policeman who interrogated me that my passport says I'm from Indonesia (not China) and just a tourist (not an immigrant). I heard him say "Indonesia" and "tourist" several times before he turned back into the police car followed by the other two.

Deliberately I took a tram to the opposite direction from the train station expecting to get away from anything Chinese. If I could do face make up, I would have disguised my looks to whatever as long as it doesn't look Chinese. I mean it!

I was happy when the view through my window appeared more and more Russian: The houses, the people. No Chinese restaurant, no Chinese store. My tram reached the last stop. I got off. I breathed in the new air. Phew. Welcome back to Russia, I said to myself.

Suddenly, I heard a voice behind me. I turned my head. A Chinese guy! He uttered something to me in Mandarin. I shook my head hard. "I'm sorry, I am not Chinese," I told him in English. He switched into Russian. "I'm sorry. I don't understand," I replied. For a moment he looked stunned and then disappointed. He turned to another person, said something, and that Russian lady shook her head.

"No, no! No need to feel sorry! People aren't always as they appear," I told myself. I continued walking.

But, I felt like the Chinese guy was following me. I stopped. He walked pass by me. A few meters ahead of me, he turned his head at me, but kept on walking. I went into a shop where I found many good stuffs that somehow soothed my feelings. 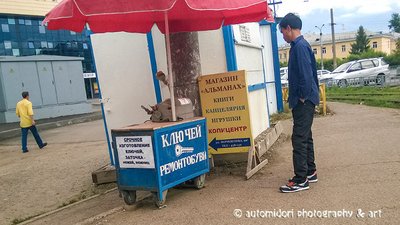 Purpose of shooting? This locksmith is Chinese. I secretively took this picture using my cellphone, because I didn't want to cause myself a second trouble. While waiting for the tram back to Irkutsk Train Station, I watched him while wondering from what city or village in China he had migrated. Do I know his (birth)place?

Yes, the "kue" are known as Buryat cuisine in Russia, but Buryat are a historically nomad Mongol people with no tradition of wheat ciltivation, so the cakes are probably of Chinese origin anyway.

Бурятские буузы are not cakes. It is something like pelmeni. Dough and meat, roughly speaking.
That three letters of the word "Бурятские" appeared to look like "kue" due to some artistic design, see?...

I like all your stories about transsibirian journeys! And dream about traveling eastward from my home in Kiev. By the way, have you ever been in Kiev?

Hi, Aleksandr.
Thank you for reading my stories. Thank you for your explanation. FYI, the photo of that cuisine I referred as "kue" really looks like a typical Chinese cuisine. It's very common in China, Malaysia, Indonesia. Why in Buryat also? The explanation is on Andrey's comment above, a Russian and a linguist.

No, I have not been to Kiev.