A Changing World in Irkutsk

I found Irkutsk different from the other cities I've visited in Russia, though not yet so many. Faces, views, feelings, changed. 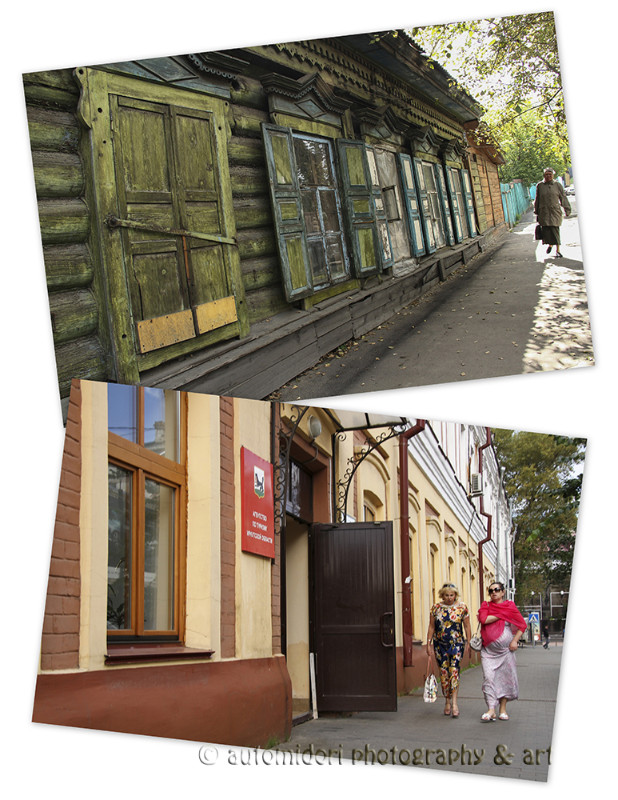 Part of Irkutsk seemed to be lingering in the past while the other part was giving birth to a new Irkutsk. You might say that the shabby part is kept by purpose for culture shake. I'm not sure about that because I found several homeless men sleeping on the street -- sights I can't recall witnessing in the other cities of Russia I visited. Please note, I'm saying "men" not "man". 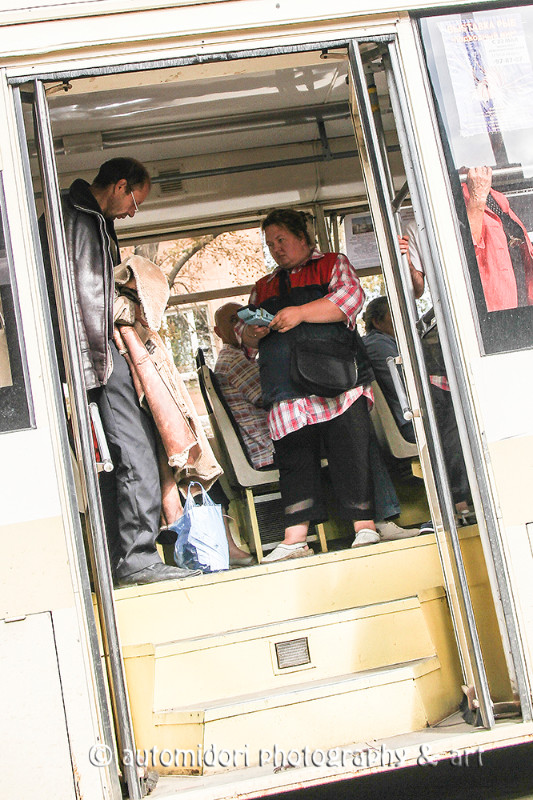 I was sitting at the bus stop fixing my camera lens when I heard a woman's voice yelling. I looked up. A tram had stopped. The door was opened and the lady conductor pointed at the door. The yelling went long enough that I had time to finish fix my lens and in spite of my camera's increasingly uncooperative auto-focus, I managed to make a shot of them. The blanket in his arm, the coat over his shoulder, the piece of wire sticking out from his plastic bag, were enough to tell me who he was. This, too, was my first sight in Russia. My Japanese teacher had taught me that it's considered impolite to stare at someone. But I just couldn't help it.

The man put down his plastic bag and pulled out something from the back of his pocket. He gave it to the lady conductor, and she turned her head to the front side, yelled out one word, the door closed. As the tram moved on, I chocked. I, a foreigner with no single word of Russian, has been up and down Russian trams and buses, and yet the conductors have always been kind -- extremely kind -- with me. So if this lady conductor has the heart to yell that loud at a male passenger, it must really be something terrible. I, a foreigner, has the luxury getting on and off trams like playing on a slide in children's playground. I don't think much of the fare. On the contrary, here is a man who cannot afford a tram ticket on a land his own. If only I knew some Russian... I would be happy to pay his fare.

I looked into myself like seeing another person. In my hometown I rarely have empathy for homeless people or beggars, because I consider them taking advantage of others, making themselves so by their own choice, or self-pitying themselves. The later is the most disgusting thing for me from a person. Let alone paying for a beggar's fare, I am never willing to give alms. Charity I give through recognized organizations, not to beggars. Hah... maybe the passengers on that tram carried the same view as me. Hence, despite the continuous yelling of the conductor, no one stood up to contribute a ticket for him. 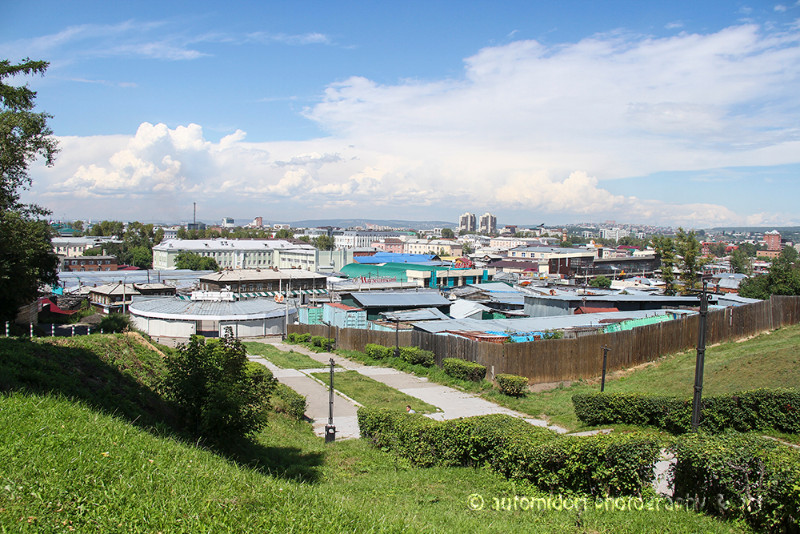 Here's a top view of Irkutsk. In behind, magnificent structures emerge. 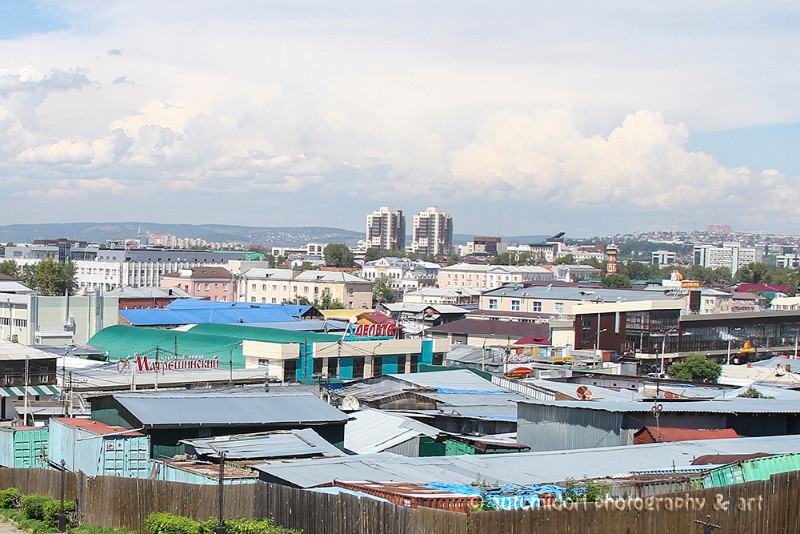 But with a little close up, one can see the shabby houses built from aluminum and old containers. Don't those houses contradict the back view? 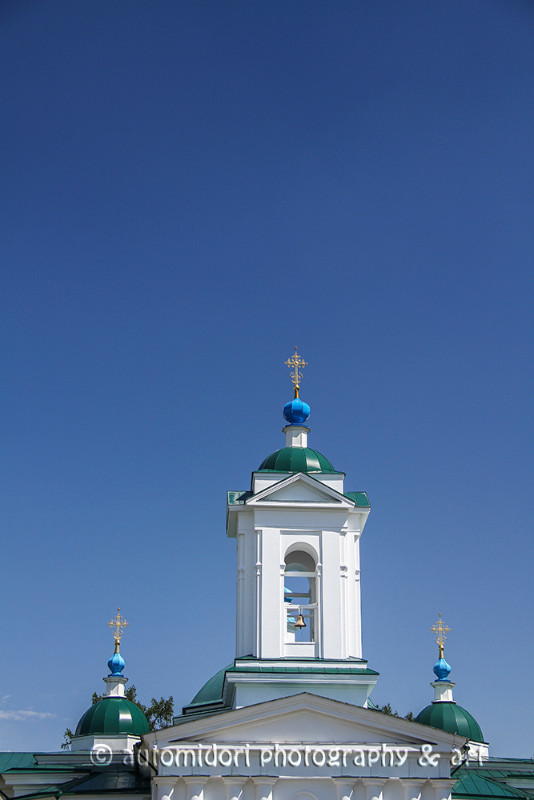 It was near this church from where I got the top view of Irkutsk. The lower part was being renovated, not pretty at all to put into the frame. 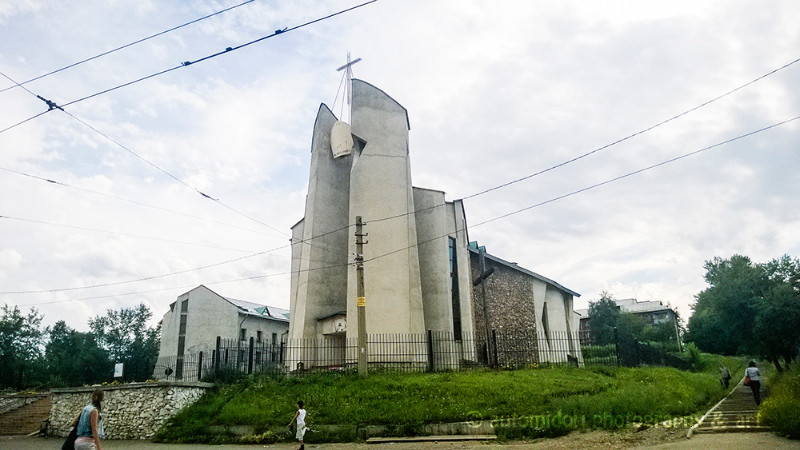 This church is located on the other side of the Angara Riverbank opposite to the church shown above. I went here in an attempt to escape the Chinese environment. 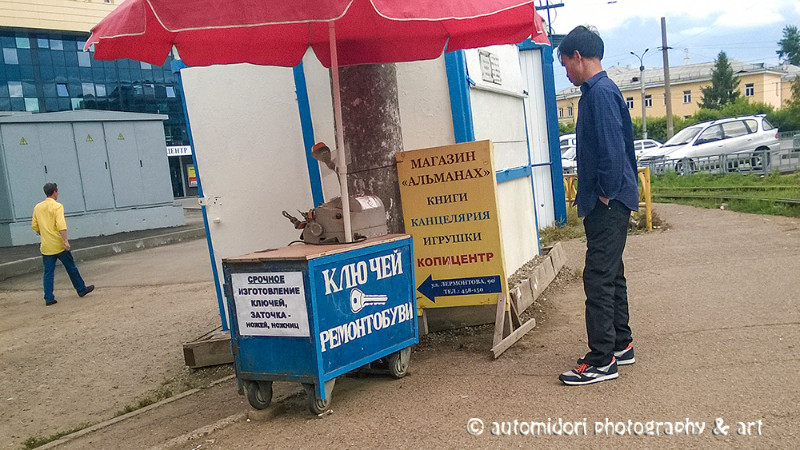 Do you remember this locksmith? It was exactly across the church. 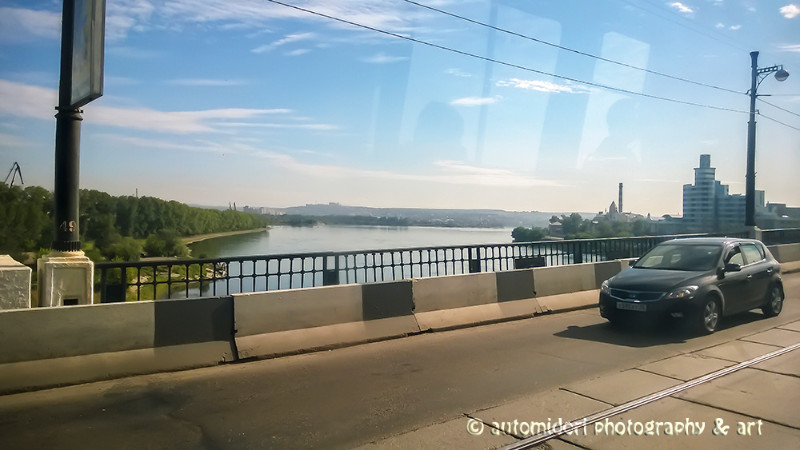 This is Angara River which I shot with my cellphone from my tram window. 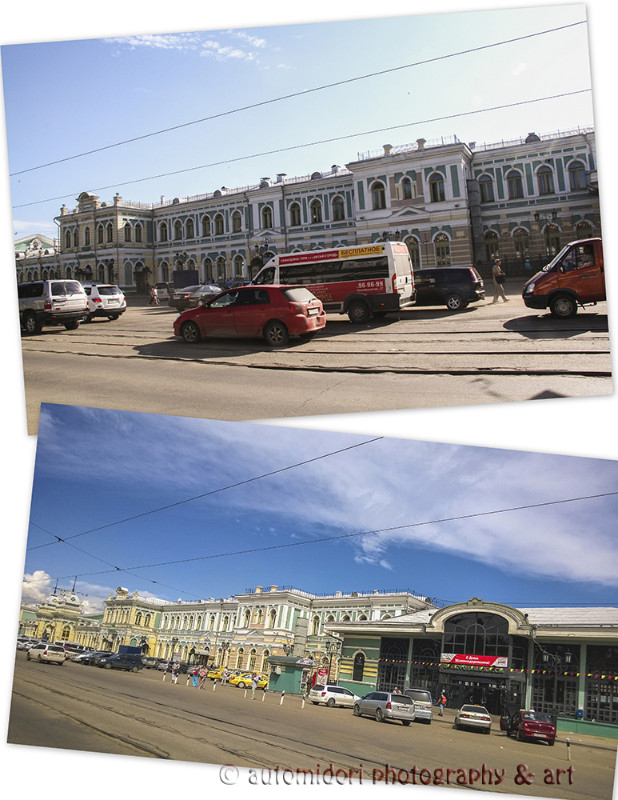 Traffic in front of Irkutsk Train Station is hectic in the morning (top) and calm in the afternoon (bottom). 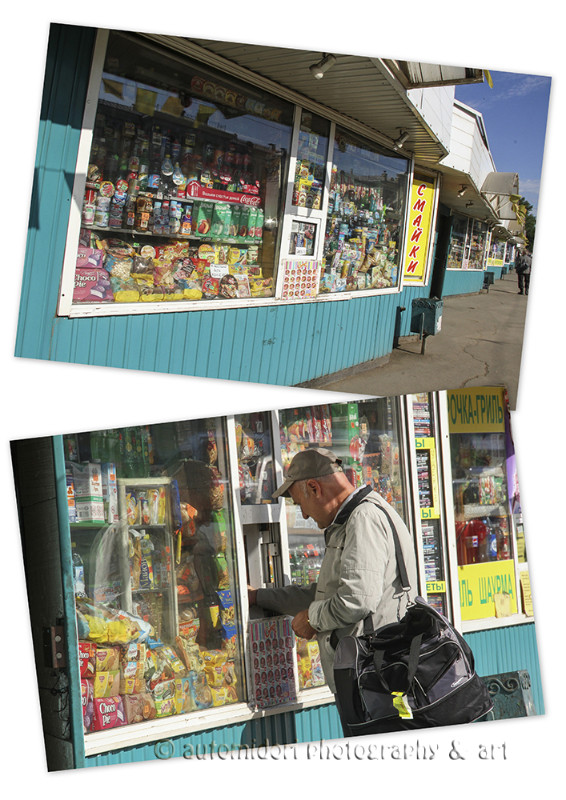 Across Irkutsk Train Station there is a line of authentic -- I call it so -- Russian shops like this where you can find almost any daily needs. If shopping here doesn't appeal to you, you can try the Chinese shopping center I showed you in previous China... opsss, previous post. 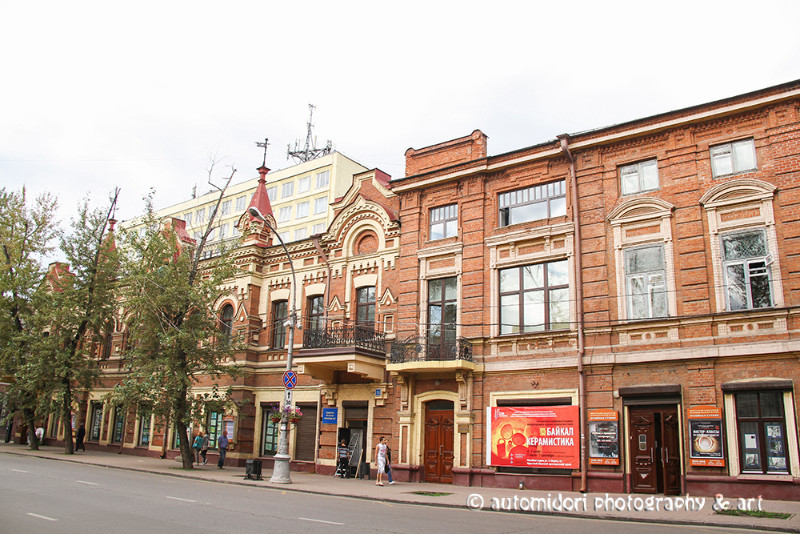 Or, you can try a higher level of lifestyle here. 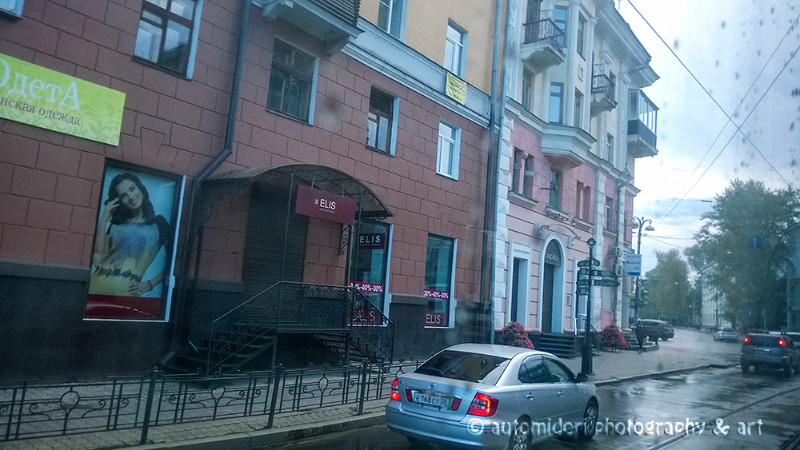 It wasn't the people and the view that was changing. The weather, too. The summer I came, the sky could be splendid blue for an hour or so, but gloomy grey by the next hour. The sun could be shining bright that I saw some men walking bare chest, but then raining hard afterwards. 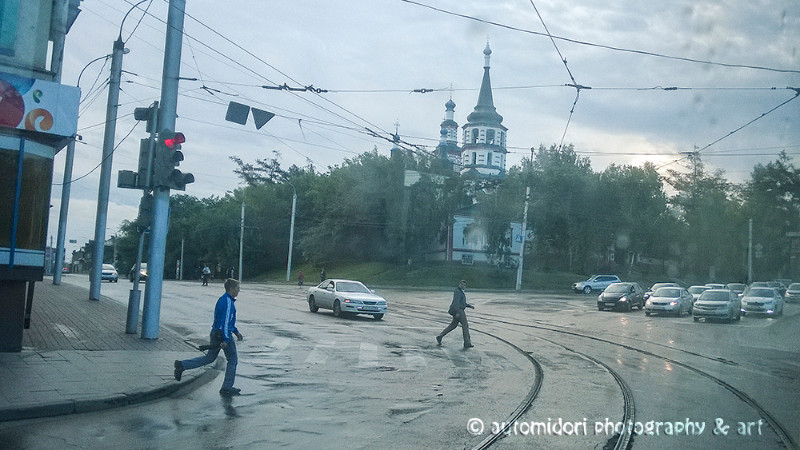 Remember, trams in Irkutsk run in the middle of the street. 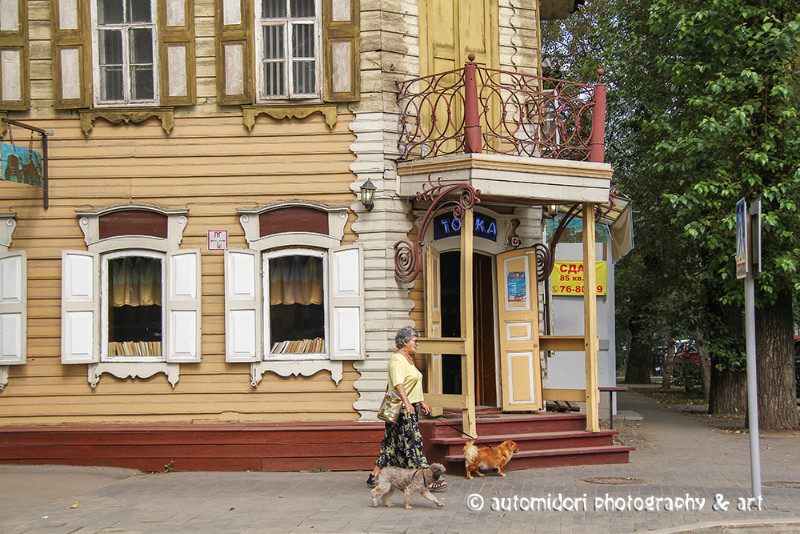 This seemed a cozy cafe which I would be able to spend hours, provided I spoke and read Russian. It looks like a cafe library. You can see the books through the windows on first level, can't you? Unfortunately for me, the waitress understood zero English and was too busy attending guests that she didn't care taking a look on my English - Russian translator application. 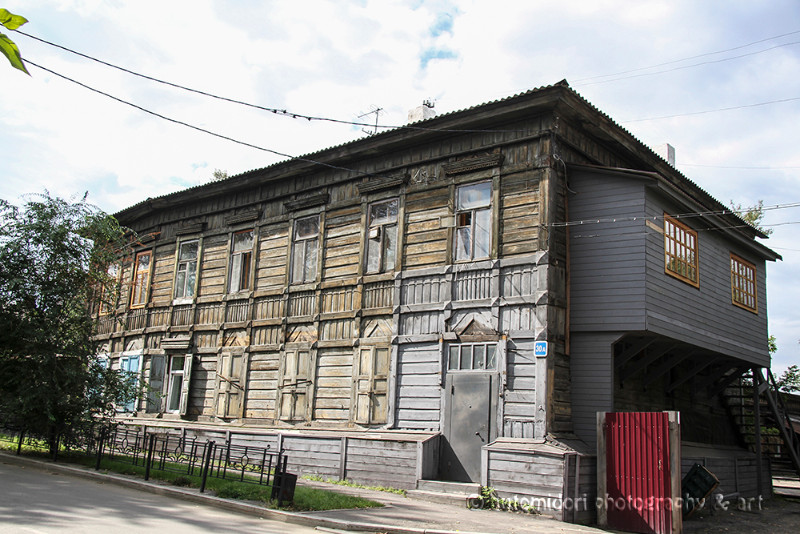 Do you see that right part of this house? It's completely new compared to the rest of the house. It looks like they have attached a new structure to the main old building. How long will this last?