Life off the Rail

Since I was a kid, every time my family traveled through the countryside, my mind used to wander such as: "How would it be like if I lived in that house?" 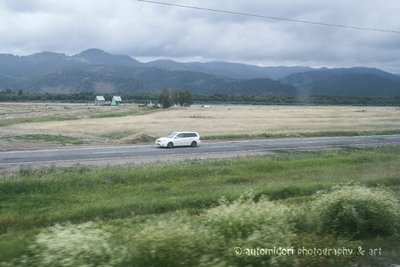 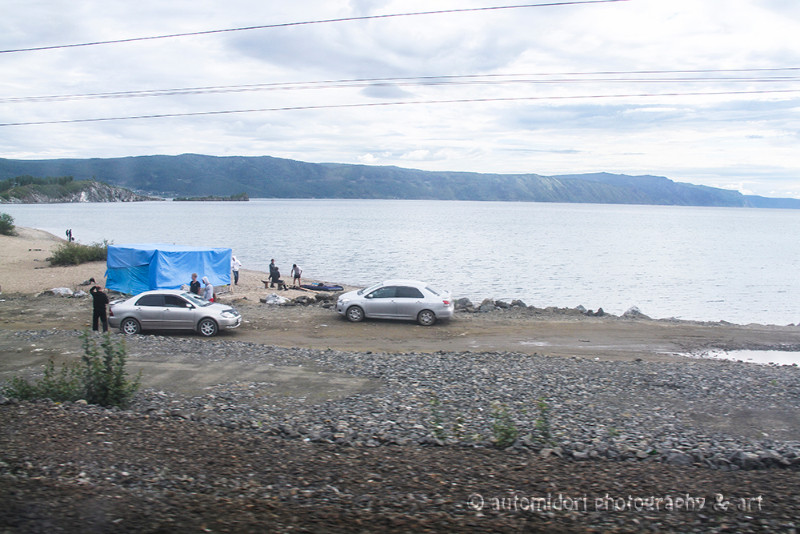 The gloom and rain didn't stop people from spelling summer by the side of Baikal. People camped, picnicked, tracked. A little left side of this picture (not seen here) I saw two tents. This was not the only spot I saw along Baikal. I learned not to take for granted the climate I have in my home country. Activities like this, we can do almost all year long. But yes, we don't have snow... ugh. 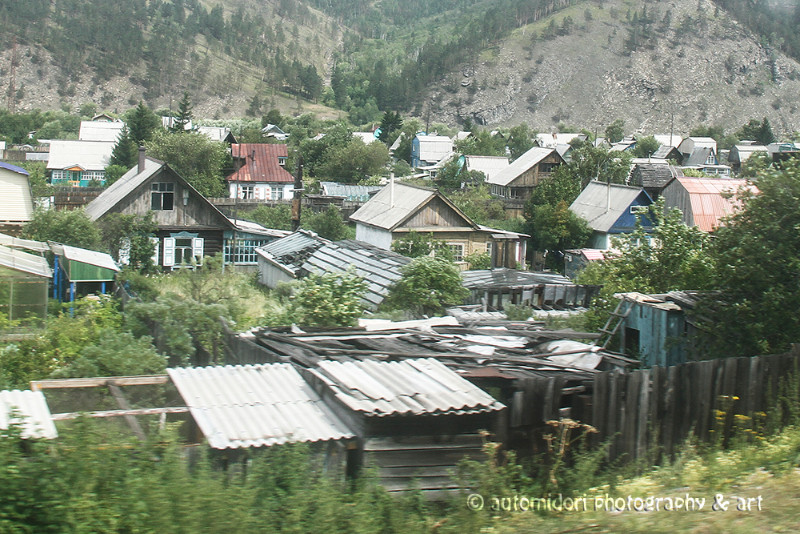 Houses looked almost the top view I had from a hill in Irkutsk: cramped. 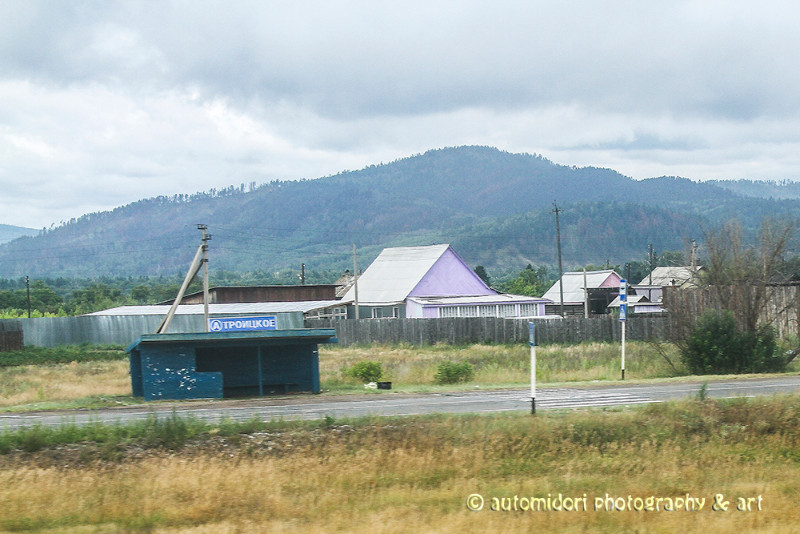 I find that bus stops in Russia vary from place to place. Even the next bus stop may entirely be a different design. And that zebra cross, aha! On such a quiet and narrow road in my home country there would never be one. I wondered, if I don't cross the road while walking on the zebra cross here, would I make anyone upset like what I experienced in Birobidzhan? 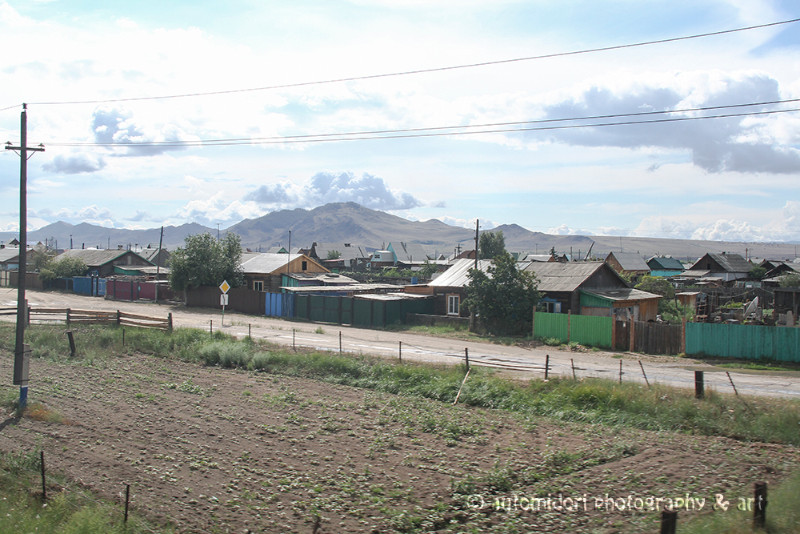 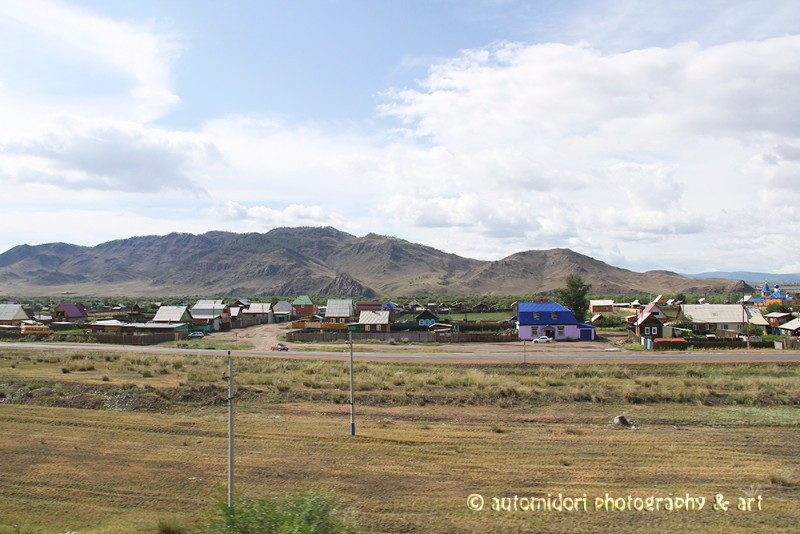 And here, much better life, I suppose. 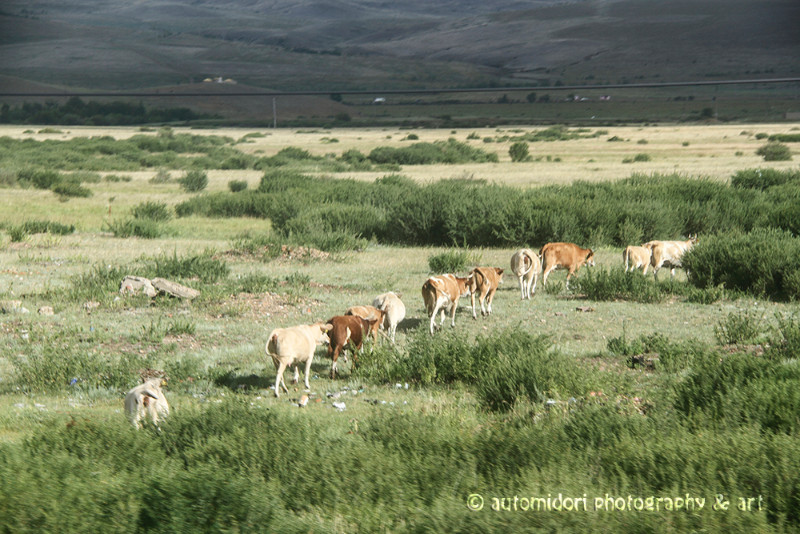 The nearer we got to Mongolia, the more life became Mongolian. Herds of cows and horses became frequent sight. 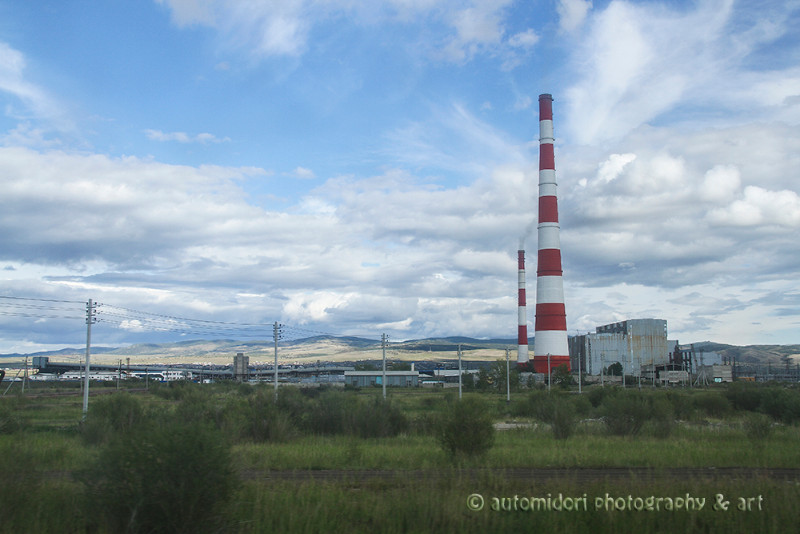 Nevertheless, life on the Trans Mongolian Road is not just about farm and cattle. Industry is also in the air. 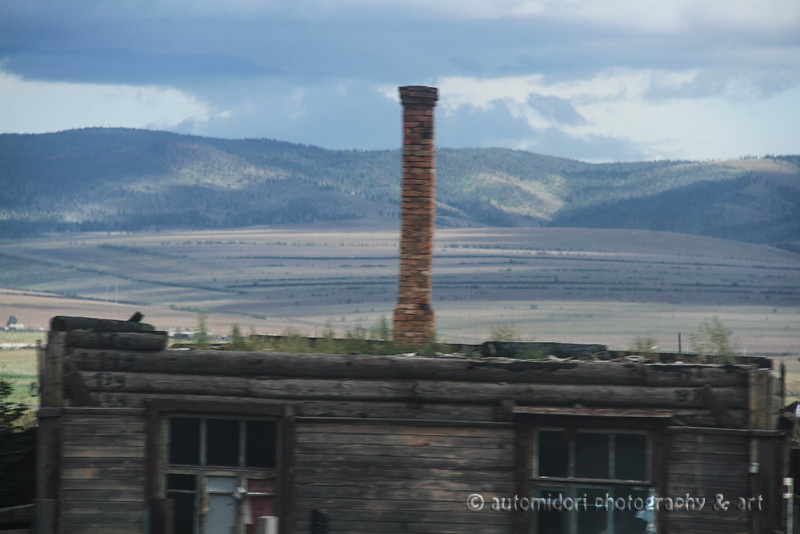 I wonder what that tall thing on the roof is? A chimney?? That long? It's almost as tall as a one story house. Is it because snow piles up fast here? 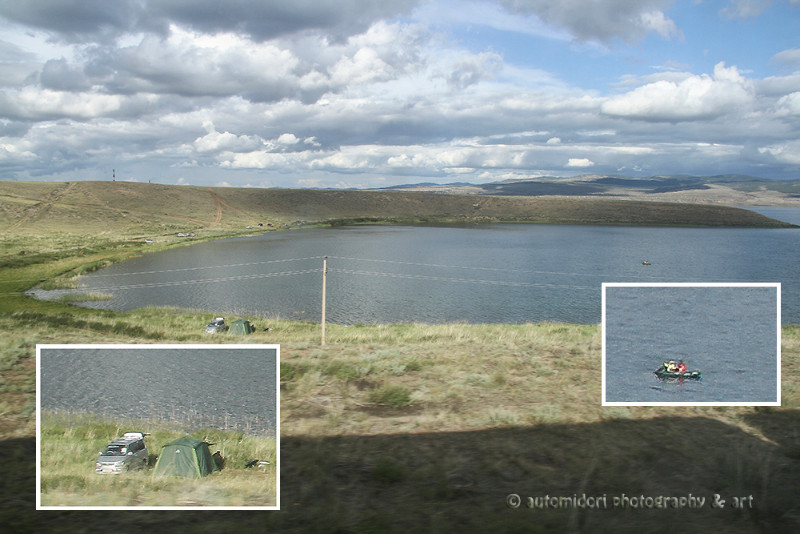 Although nothing in comparison to Lake Baikal, Gusinoye is huge enough to make two men and their boat just a vague spot. Here, too, people camp while summer lasts. 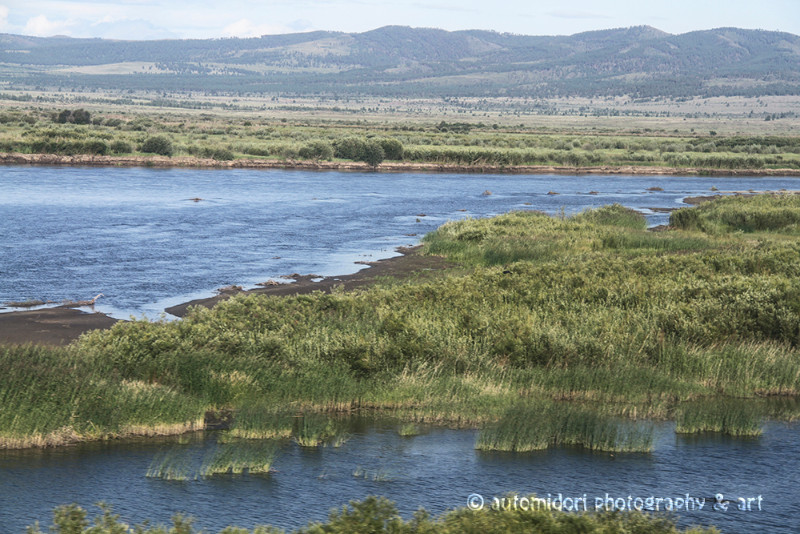 Beginning from here to Mongolia onwards, we'll encounter lots and lots of grass. Not grass like any grass. It's fragrance is rather strong. Once you are familiar with the smell, suppose you are brought blindfolded to an opened space -- steppe! -- where these grass grow, you'll know it at once. But the thing is, some people, including locals, have an allergy to this kind of grass. When infected, their eyes turn reddish and watery.

Communal houses -- seem so -- at the countryside. 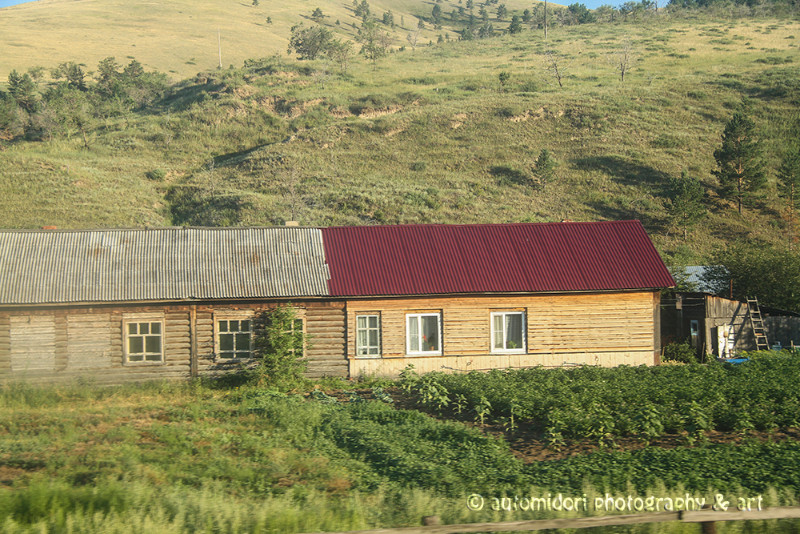 Hah! Luckily, at last, I got this picture, clear and sharp enough. While I had been taking pictures of houses for hours, I didn't realize that there was something in particular until Paul, my cabin-mate, said it:

"Why are there many houses unfinished built? It seemed like once there was an economy boom that people everywhere started building. But suddenly a fall occurred and people couldn't continue their construction. See that house? And that one, too!"

Since Paul mentioned that, I had been trying to capture the unfinished house, but always failed until... this one. It kind of stirs a melancholic feeling. 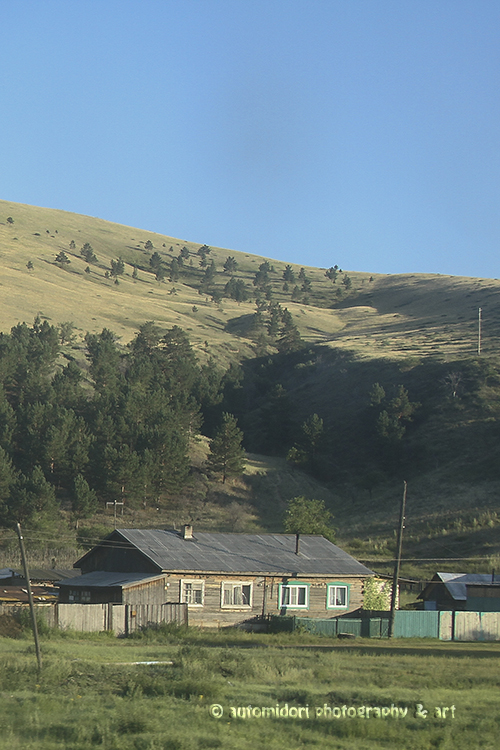 Whether a house or not, I hope for everyone living along Trans Mongolian Railroad, may it be a home.

The house with a long chimney is just a ruin, with the attic and roof missing. The small traditional houses in most of Russia always have a high roof because of snow, because the snow will not drain from a flat roof like rain, and will crash the roof instead.

That house is not unfinished. It is more likely owned by two families now. One family is better off than another, so their half has new roof and siding.

Uhm... maybe... on this one. But the ones my cabin-mate pointed out where more obvious such as empty roofs on one side of the building. Or empty walls on part of the house. For sure those empty parts weren't ruins, because the completed part didn't look shabby/dull.