Pictures on the Window -- Part 2 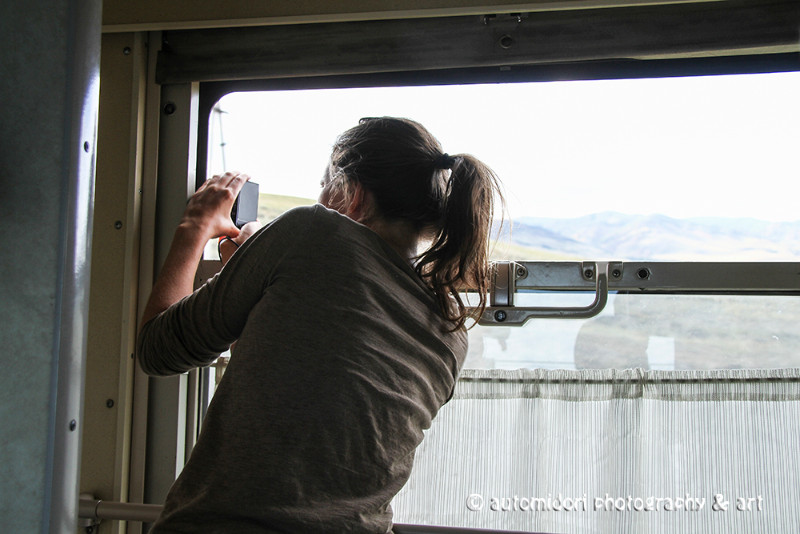 This was when passengers of Trans Mongolia hadn't turned wild stepping on the heater below, sticking out their head, absorbing all the best of views. If I knew anyone was going to do so and the train attendants said nothing to that, I would have climbed on the heater an hour ago to free my lens from the spotty window. But inside my cabin, no one opened the window and I didn't try to, because I thought Paul or Nikolay might not like it. 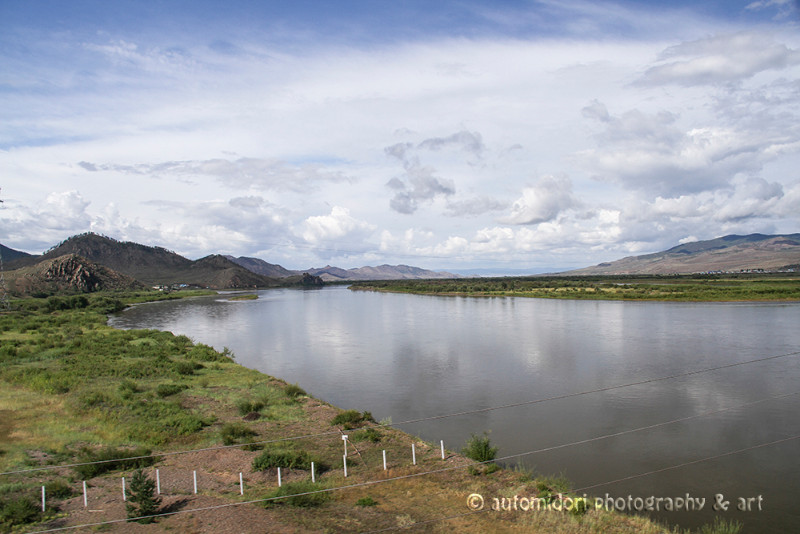 The Selenga, along with the Upper Angara and the Barguzin Rivers, provides one of the main inflows to Lake Baikal. The mean discharge of the Selenga River into Lake Baikal in winter is approximately 100 m3/s which increases to 1,700 m3/s in spring as the snow melts. A multibranch fan-like channel structure forms the Selenga Delta. 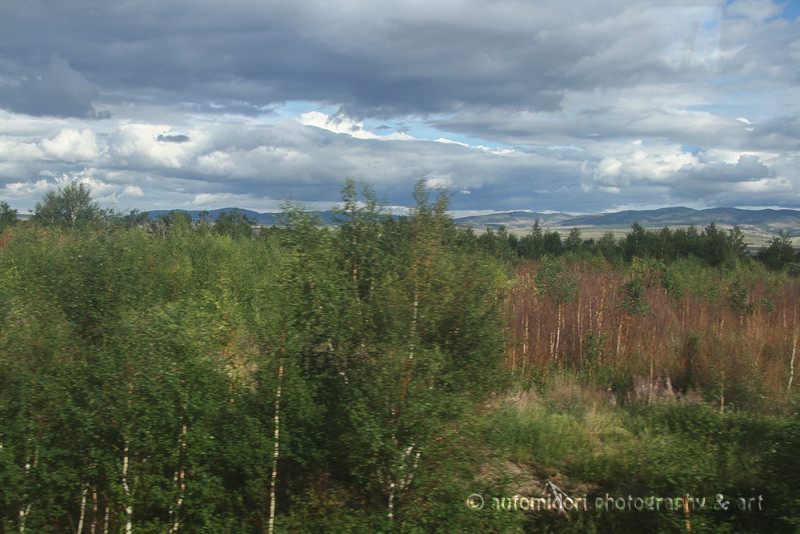 A view from the other side of my train. 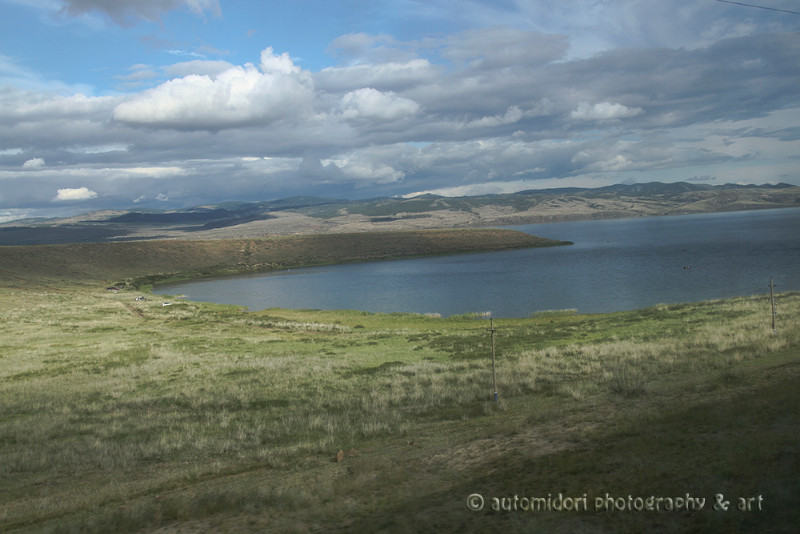 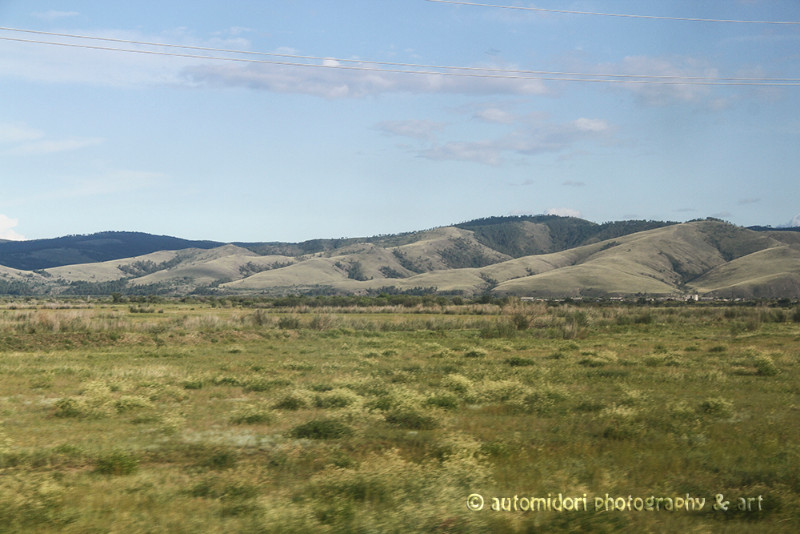 Steppe according to Wikipedia:

In physical geography, a steppe (Ukrainian: степ Russian: степь) is an ecoregion, in the montane grasslands and shrublands and temperate grasslands, savannas, and shrublands biomes, characterized by grassland plains without trees apart from those near rivers and lakes. The prairie (especially the shortgrass and mixed prairie) is an example of a steppe, though it is not usually called such. It may be semi-desert, or covered with grass or shrubs or both, depending on the season and latitude. The term is also used to denote the climate encountered in regions too dry to support a forest, but not dry enough to be a desert.

Thanks to Nikolay for asking Paul how to spell 'steppe'. Otherwise, I would call this just grassland. 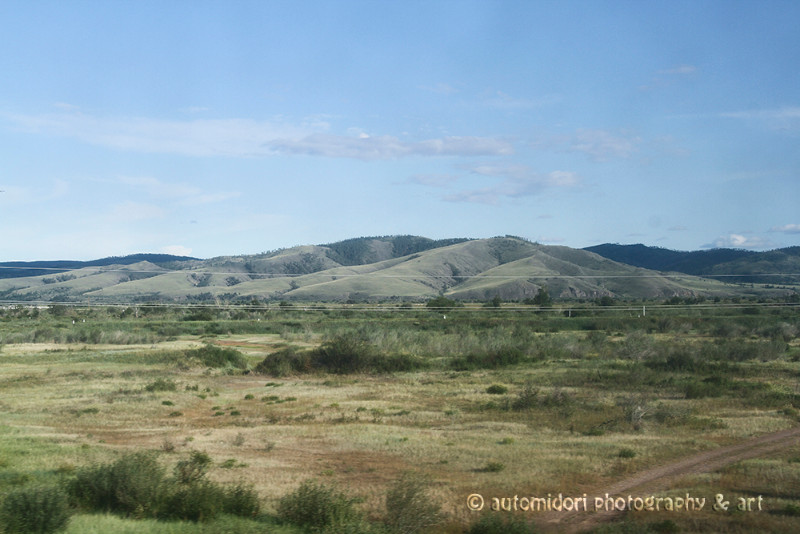 See that wheel track? Later in Mongolia I noticed how tough it can be driving through steppes, for one who is not used to, of course. Then it seems everyone will follow the same wheel track and the wheel track becomes the unofficial road, if I can call it so. How about in winter?? Someone has to create a wheel track. But, maybe the wheel track would vanish in no time. Tough, tough life. Hats off. 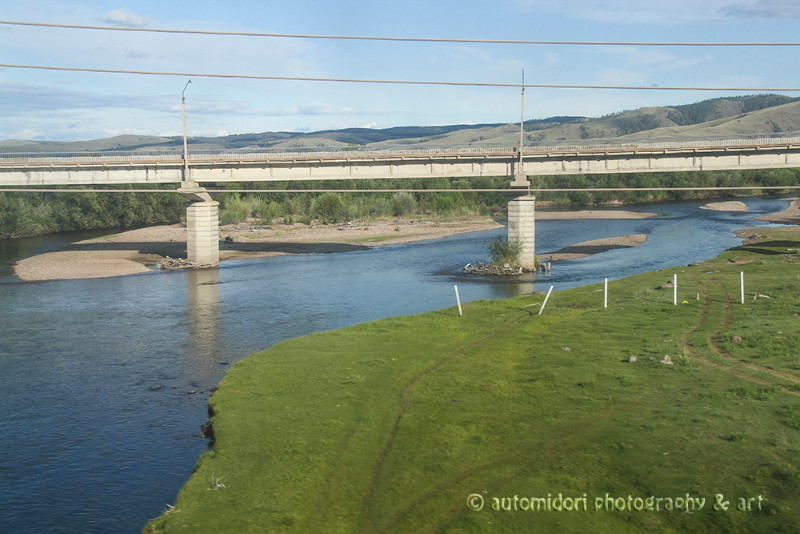 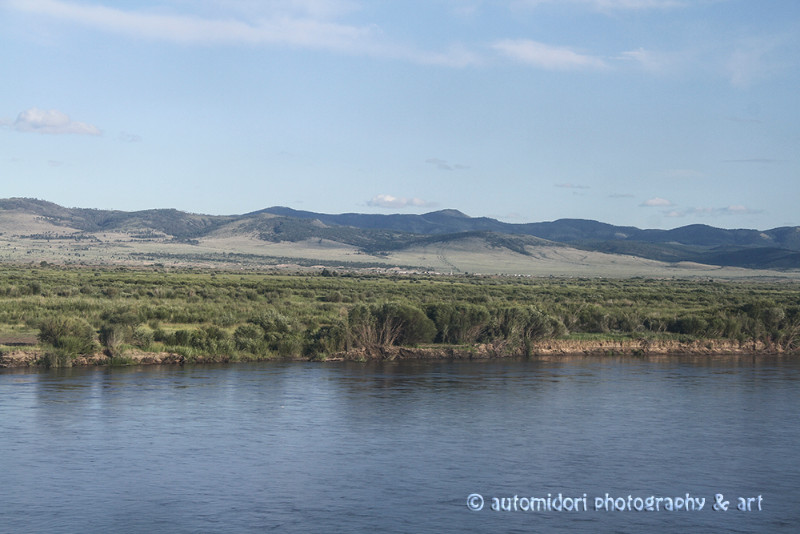 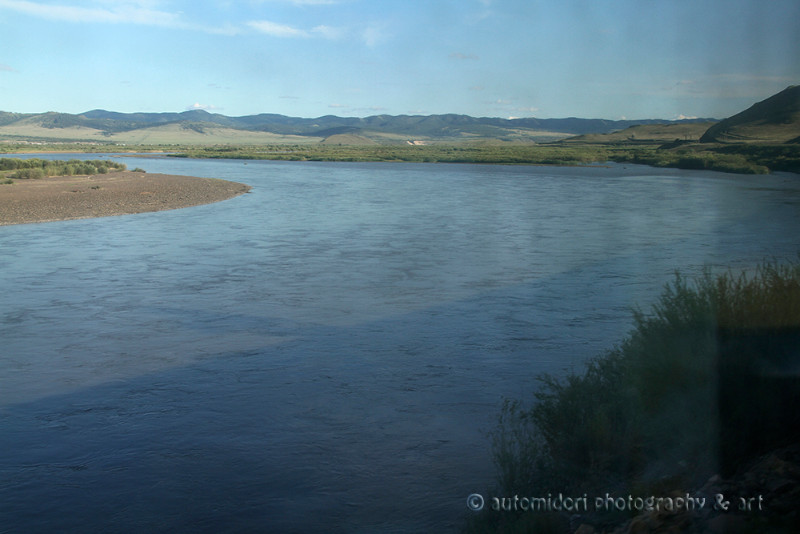 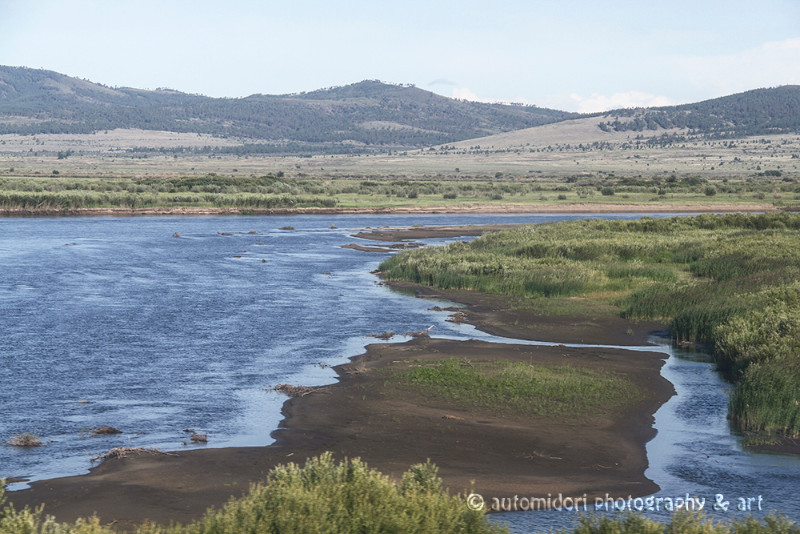 Maybe you recognize one of these from Life off the Rail 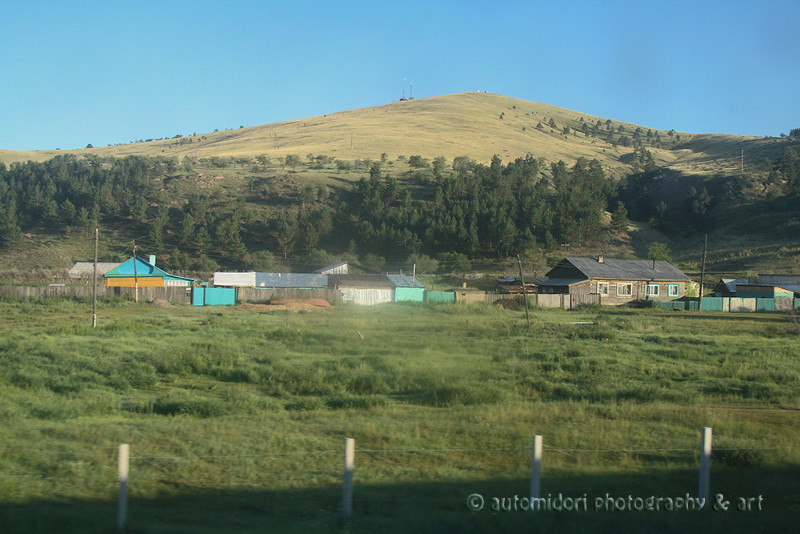 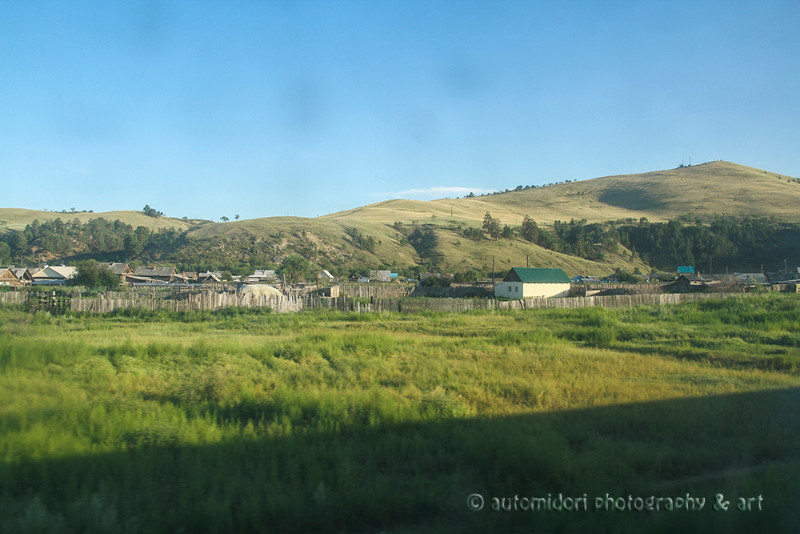 We arrived at the border of Russia and Mongolia when it was dark. Some keen and zealous photographers continued documenting journey on the border. By the time immigration process on the Mongolian side was completed, it was midnight. 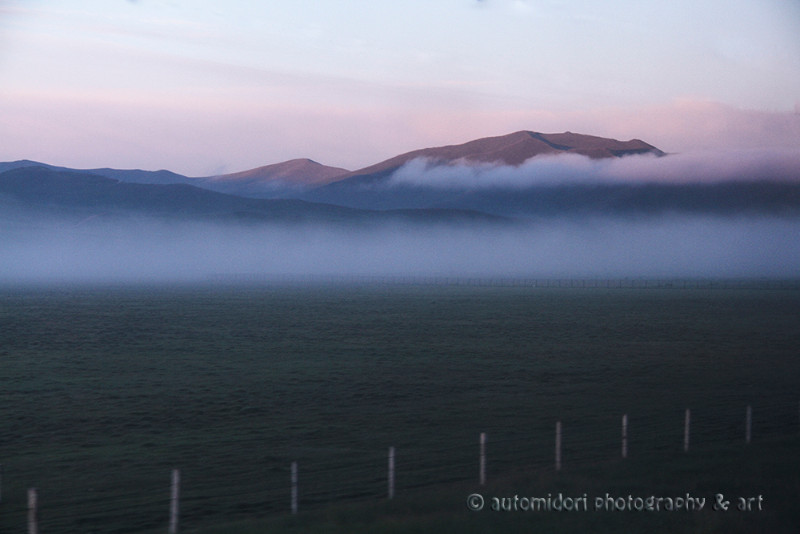 I woke up to one of the most breathtaking sunrise twilight ever.

"Sonja?" said Paul at my back.

"Yes?" without turning my head or even letting down my lens. No moment should be missed.

"That's not twilight. Twilight is after sunset." Paul continued.

"I thought so before. But then a Canadian friend looked up the word for me and yes, twilight is before sunrise and after sunset. Wikipedia says so, too."

"Oh really? So I'm learning another new word now. I learned 'steppe' from Nikolay. Now I learn 'twilight' from you. That's why traveling is always interesting," said Paul.