The part everyone knows about Russia, and the part only God knows.

In the previous times when I mentioned "Russia" and was asked where in Russia, and then I answered, people were like "Where did you say??" So now, here I am, in Moscow. It seems like as foreigners think Indonesia is Bali, so do foreigners to Russia think Russia is Moscow, and just Moscow. 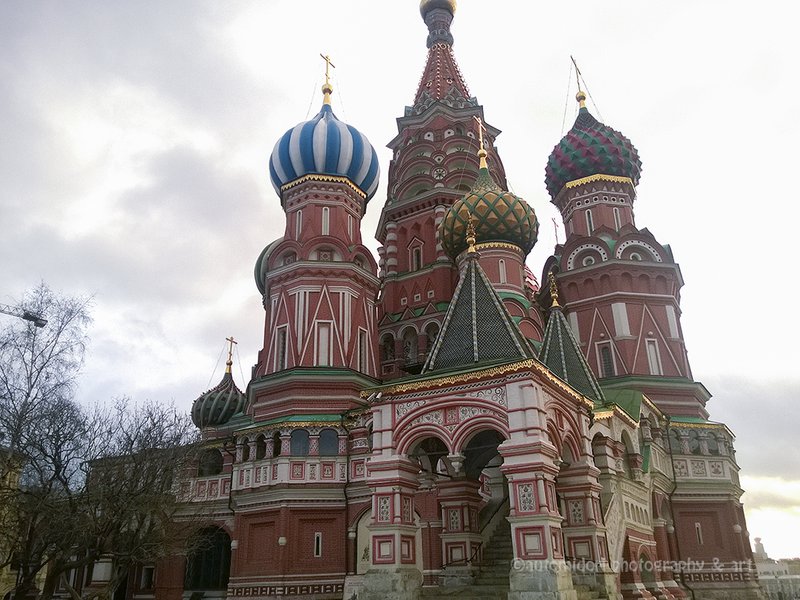 And has just this: St. Basil's Cathedral.

Well... to go to where everyone goes doesn't always hurt anyway. I started from the Red Square which was within a walking distance from my hostel. At the Red Square, I waited for the first Hop-On-Hop-Off sightseeing bus which Viator said was the first point starting from 10:00 AM. As to make sure to get the most of everything, I brought myself by 9:15 to the Red Square or where I thought was the Red Square. It looks red and it looks like a square, does it not? A click here and a click there, minutes went by. Oh, that must be Bolshoi Theater. Definitely.

Then I began wondering from which bus stop will the HOHO bus depart. It's 9:50 already. Would a red double-decker suddenly pop up 10:00 AM? Am I on the right place? I called Moscow Free Tour which was the contact agency mentioned on my voucher from Viator. No answer. 5 minutes to 10. It didn't seem that a bus would enter through this part of Kremlin from the side across to Bolshoi Theater. I called again. 5 minutes pass 10, my call was answered. While the man over there insisted on "Red Square, Red Square", I insisted on: "Hey, I am a foreigner, you know. This Red Square looks huge for me. Which side of the Red Square do you mean?"

Oh my! Why wasn't that written on my voucher? Why didn't this man say so from the beginning? It would have saved my phone call expenses as I was using my Indonesian number. Aaargh. I walked (back) to St. Basil's Cathedral, made sure where the entrance was, and figured out where would "behind" be.

For sure, I have missed the first bus. Okaylah 30 minutes is no big difference, I comforted myself. I settled down at the bus stop behind the cathedral, waiting for the 10:30 bus, because Viator said the bus departs every 30 minutes.

Till 11:30 no bus appeared. I had already finished one package of oat biscuits, a cup of yoghurt, and a 360o view of St. Basil's Cathedral. I crossed the street through the underpass wanting to take a closer look of the buses parked across. They were huge buses, seemingly tourist buses. Although none of them were red like the HOHO bus, who knows I'll find luck with another tour bus.

Surprise!! Just when my head popped up from the opposite underpass tunnel, I saw that red colorful HOHO bus!! Oh no! If I go down this underpass again, I'll surely miss that bus. The thing why I was dying for this bus was because I had paid already!! Having been waiting for an hour at the bus stop, I understood there was no zebra cross on this side of the street. Having been to Russia for the third time, I understood also that I cannot cross a street merely based on my own guts like 'at home'. But I have paid already!!

Head turn left, head turn right. No vehicles. I raaa...n as fast as I could with one arm waving as hard, towards the bus.

My surprise afternoon exercise in Moscow paid off. Here's Moscow River. I didn't know that Moscow is actually the name of a river, if it weren't for this excellent audio commentary on HOHO bus. Yes, that's the wall of Kremlin, the biggest active fortress in the Europe, listed as World Heritage. Kremlin itself means "fortress inside the city". Unfortunately, weather wasn't at its best. It even drizzled on the way. Ah, maybe the sky is sweating. 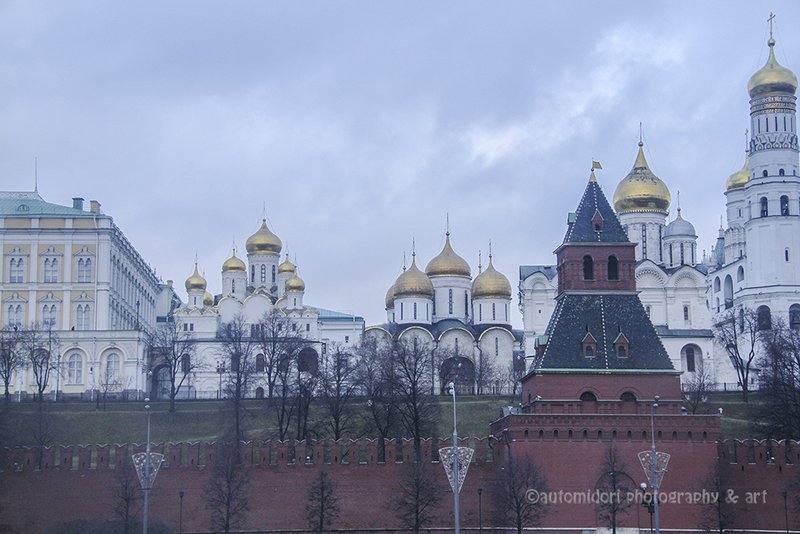 That's Oruzheynaya Tower... and a range of cathedrals. So, if you still think Russian is communist, maybe you should re-think that. 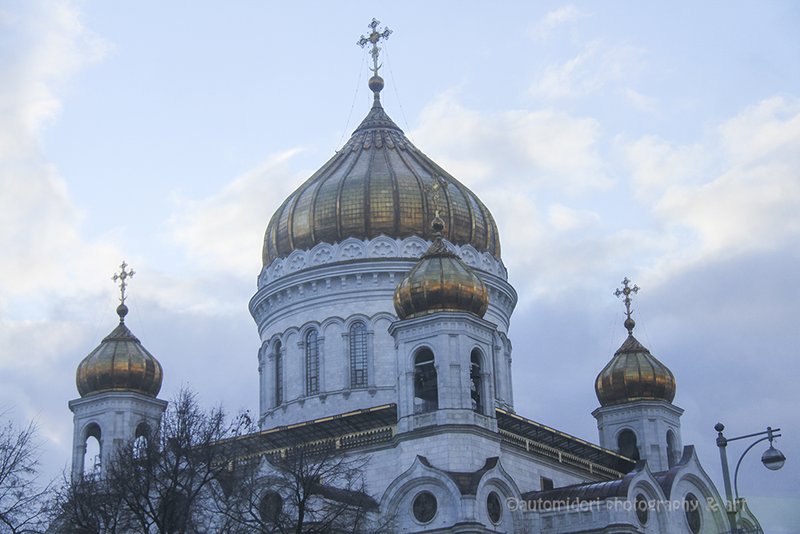 A little close up. 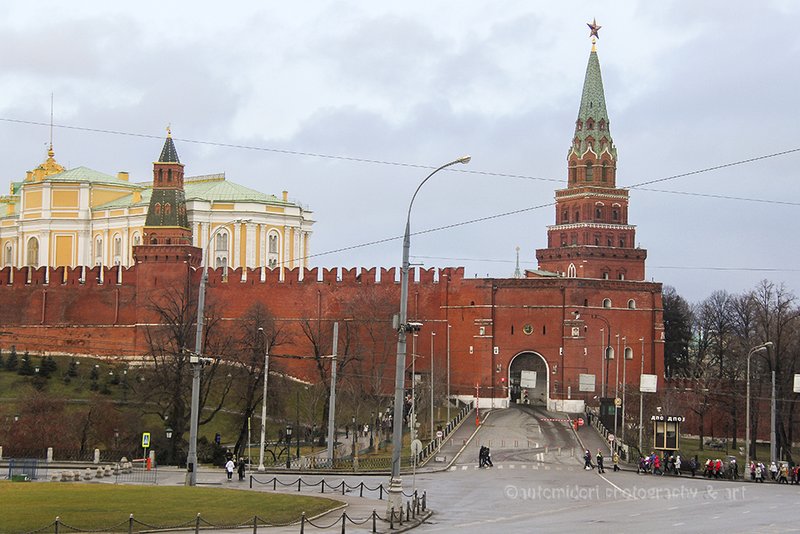 If I remember correctly, this is to be said the only entrance into Kremlin. 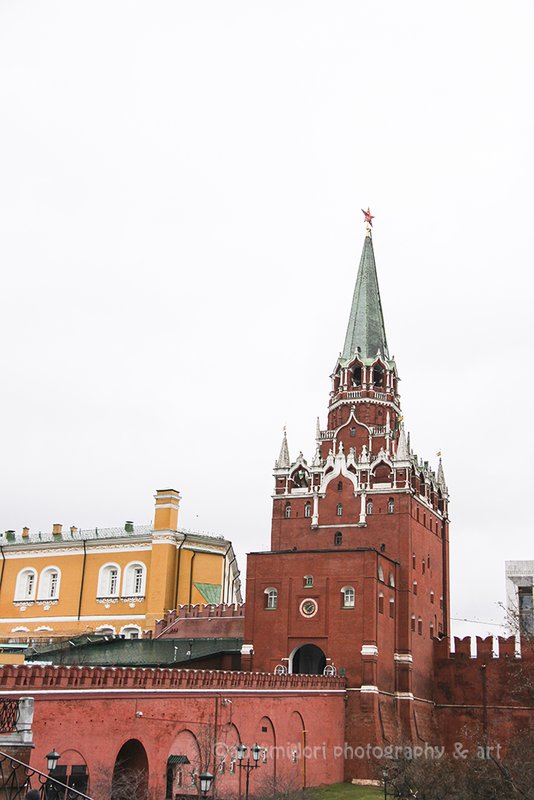 Among all towers of Kremlin, this one is the tallest, The Trinity (Troitskaya) Tower, 80 meters.

All the way I had been trying to spot out the tower which was to be said as Mosow's Big Ben, The Saviour's (Spasskaya) Tower. I couldn't find it. Maybe it was the one that was covered seemingly being under renovation. 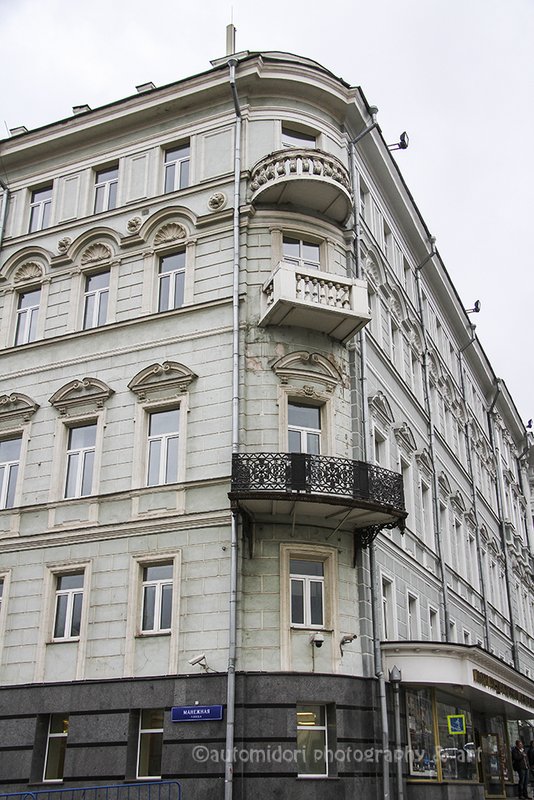 I find this fascinating because look, three balconies in three different designs. So are the window frames on each story. Maybe the architect was someone who liked to show off everything he could, or... 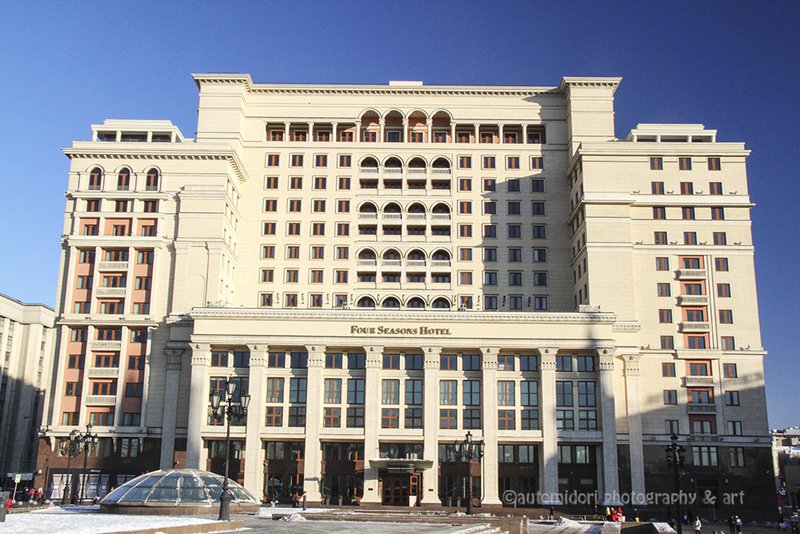 ... maybe the story was something like this Four Seasons Hotel. Turn your head to the left, and then to the right. Are they symmetrical? The facade. Here's the story, quoted from Moscow Four Seasons Hotel's website but which I also heard through the audio commentary on HOHO bus, and which my human tour guide said the next day.

According to legend, each wing was actually an individual design proposal and the architect submitted the drawings to the Soviet leader, Joseph Stalin, expecting that he would choose one of the two versions. However, both drawings were on the same sheet of paper, and Stalin placed his signature in the middle of the page, so it was impossible to know which design he had selected. Since no one wanted to question the leader, it was decided to build both designs – one on the right, the other on the left – resulting in the asymmetrical façade.

Having heard the same story from three sources, it looks like a true story. But... I still wonder. When the building was done, didn't Stalin realize the obvious asymmetrical facade?? Who likes an asymmetrical building structure? Actually, who was afraid of who? The architect of Stalin or... Stalin of the architect?? Knowing Russians as great litterateurs which is in a simpler way of saying: storytellers, I trust the truth of this story up to 78% only. Nevertheless, I admire Russians' wit.

Oh, by the way! Four Seasons was of course a foreign thing to Stalin. This hotel was originally Moscow Hotel. 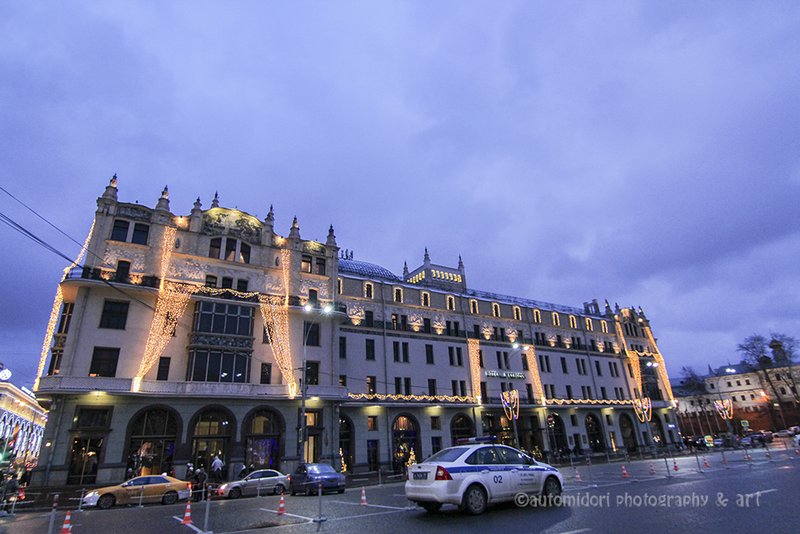 And then here's another hotel again: Metropol Hotel, on the other side of the Red Square. During the Soviet times, all foreigners visiting Russia were only allowed to stay at this hotel. It wasn't easy at all to get a permit to enter Russia. On top of that, one visitor would be spied by KGB agents which no one would know who he/she/they are. It could be the bell boy, the driver, the etc. 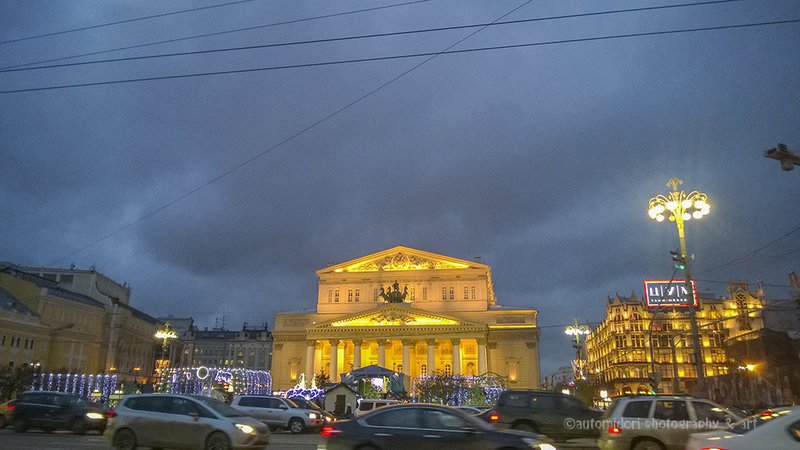 Across the street is TsUM Department Store which stands next to the famous Bolshoi Theater. Foreigners staying at Metropol Hotel would lavish their wealth here while most Russians couldn't afford it. Pardon me for this photo, TsUM wasn't in mind when I clicked my Nokia. 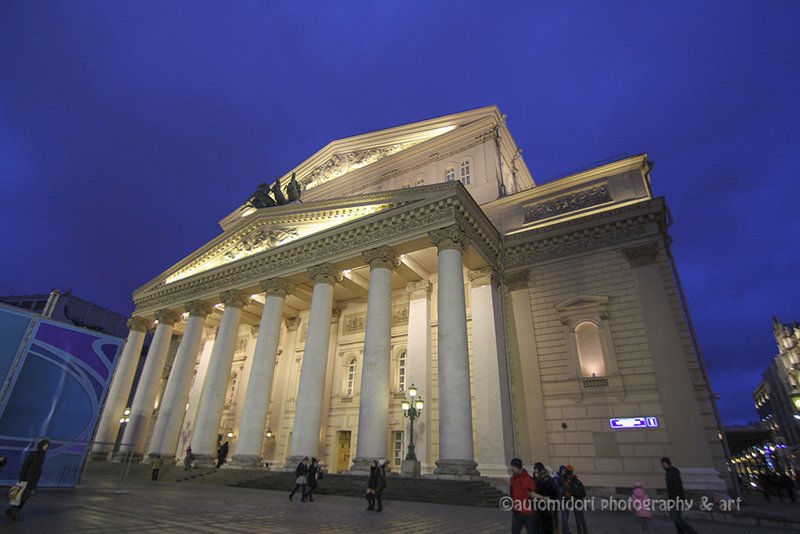 I hate it really, why did someone build that ugly structure in front of Bolshoi Theater?!?! It so ruins my dream of making a great photograph of Moscow Bolshoi Theater. I already couldn't afford a seat for one of its show. And now, I cannot afford a clean picture. This shot is the best I can get using a wide angle lens taken from the side. 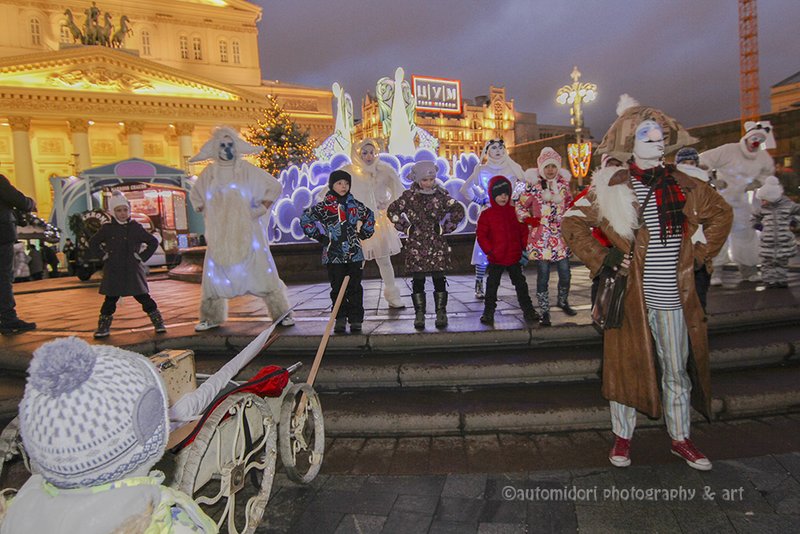 Russians did have fun ruining my view, though. Look, they are dancing. Several songs were played and one was so classical. I recorded it and then my camera dropped. Oh. The recording was lost. The classic music did not repeat. 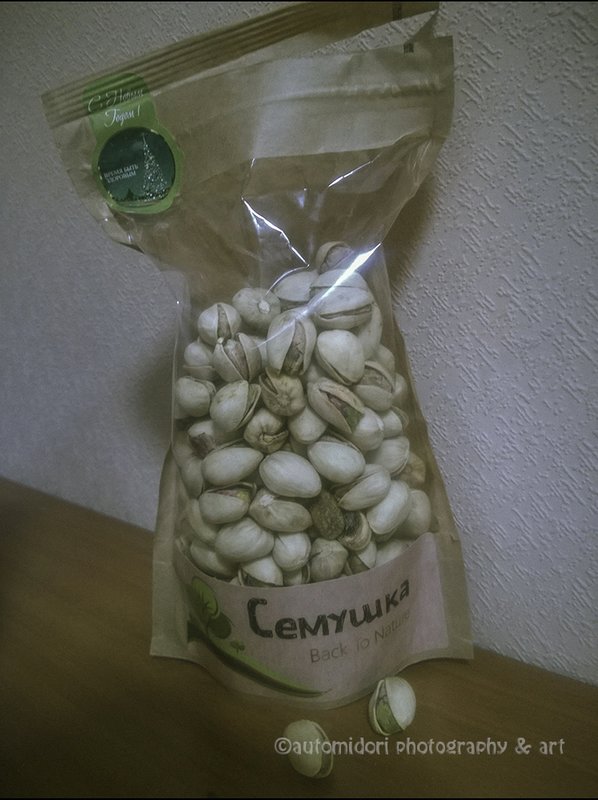 I returned to my hostel feeling terribly sleepy and once again I forgot that Moscow is 4 hours behind my regular time. At the mini market close to my hostel, I found a wonderful delight: pistachios.

Actually, this is not all I got on this day. I took a Metro Tour. That will come on next post. Stay tuned!

P.S.
"Experience is the best teacher." applies to traveling as well. Next time when I take a HOHO bus tour, I'll search the internet further such as this, and then pay the fare on board instead of paying an agency who pays another agency who pays the bus operator. It would definitely save more money, but more hassle as well, I bet. What merit did I gain from booking through Viator? Nothing. Days prior to departure I asked which stop is closest to my hostel address and the answer was: Ask your hotel's staff.

Hence, when I arrived in St. Petersburg, I was smarter. You'll see. But, that's, a long long long story away. Again, stay tuned!

My pleasure, truly! Thanks for reading