The Glory of Russia 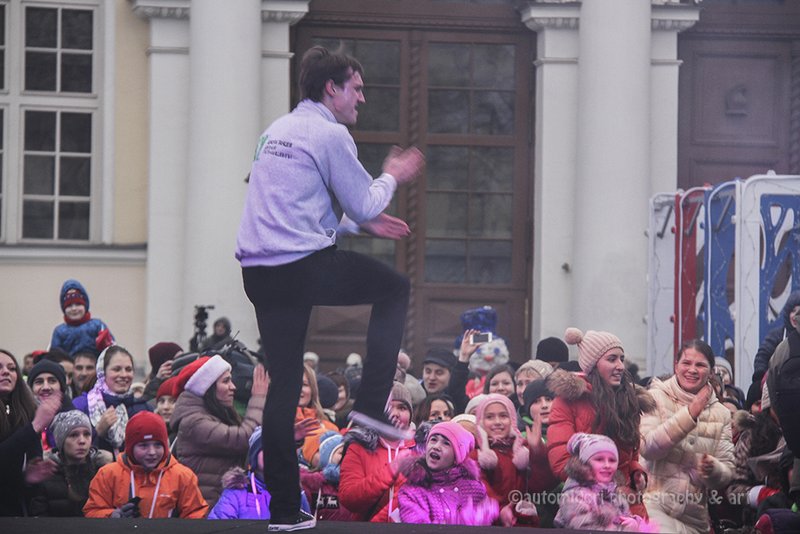 Being my second winter in Russia, I am no more surprised by this kind of public stage music and dance. It's like they are so happy that winter has finally come. 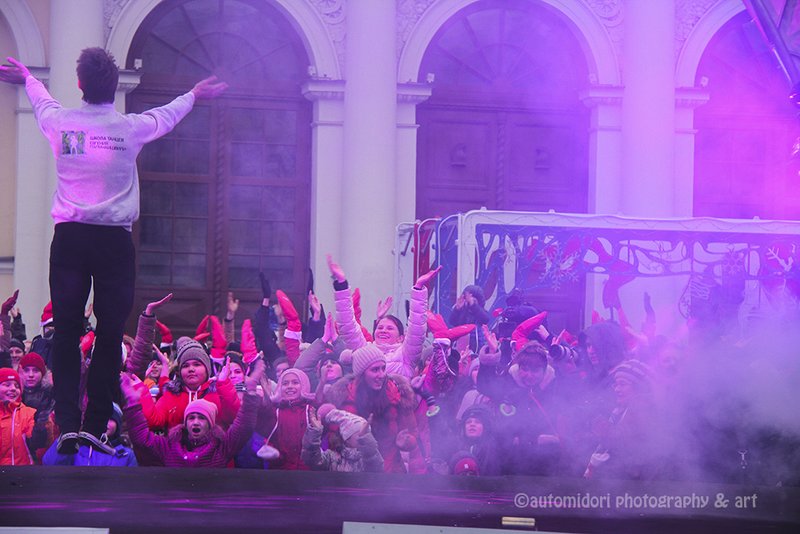 I don't think these people care the least about the sinking ruble. 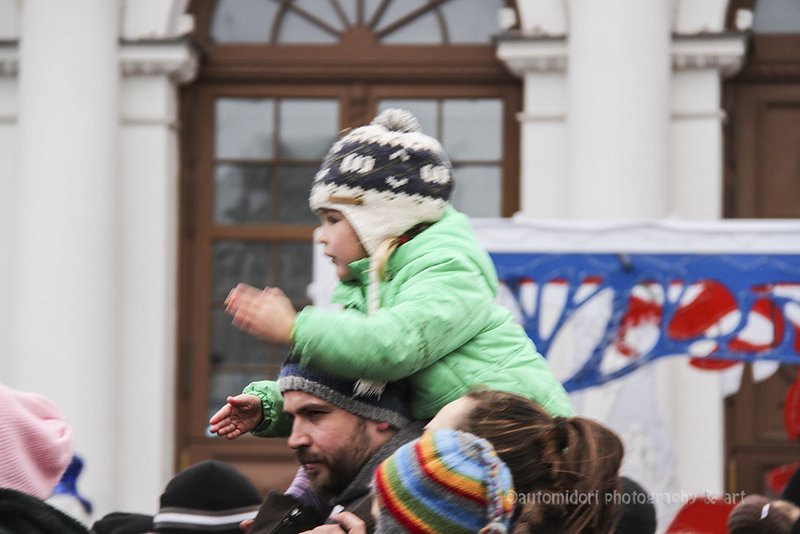 I have a lousy recording, in case you'd like to hear how the music was. I had had a slightly better one actually, but my camera suddenly collapsed and the recording was lost. The other interesting sight was of some people dressing up in fancy Christmas style costumes. The costumes were huge that one would need several hands to help dress up. There was one person lying on the ground. I thought someone fainted due to over-excitement. But when I stood on tip toe and peeped through the shoulders surrounding that person, oh my. People were actually helping him putting on his costume.

I would have liked to stay longer but I had to go across the street to Biblioteka Lenina Metro Station for the meeting point of my Moscow Metro Tour organized by Moscow Free Tour (again) but which I booked through Viator (also). On my voucher received from Viator, it was written: Moscow Kremlin
Biblioteka Lenina metro. Kutafia Tower of the Moscow Kremlin for the location. I couldn't find Kutafia Tower on my Nokia Here Map, but could easily get Biblioteka Lenina Metro. Folks, if someone says, "Place A (comma) Place B" or "Tokyo, Japan" what's your conclusion? Tokyo and Japan, A and B, are the same place. Right?

Thinking that I have got Biblioteka Lenina Metro, I didn't bother about Kutafia Tower although I wondered why nothing around seemed to be like a tower. Besides, since this is a Metro Tour, gathering in front of the entrance to a metro station should make a lot of sense. I figured out the Cyrillic characters above the metro's entrance tunnel, one by one. No doubt I'm at the right place.

But... no one seemed like a tour guide. There were a bunch of ladies gathering near the entrance. It seemed they were waiting for someone. One of them held a plastic folder in her hand with a list of names inside. Could she be the tour guide?? But... they all are speaking Russian. I'm pretty sure my tour is going be held in English and there ought to be foreigner guests instead of locals. I approached them. I thought, if they were waiting for me, maybe they would ask me something. But, I was as good as invisible to them.

Then they all went into the tunnel. 3:00 PM. Oh no. (Again) I called Moscow Free Tour, with my Indonesian number. Now, the voice over there kept repeating Kutafia Tower and ignored my question about which side of Biblioteka Lenina Metro the tower is. "Near the Red Square," said that voice.

"There is only one white tower. That's the Kutafia Tower. It's easy to find." Oh, I hate that last sentence.

Whatsoever, this means I have to cross the street back to where I had come from just now. No crossroad. Back to the underpass. Phew. What if the tour guide has left me? Then there goes my money to Viator.

At the other end of the underpass, I asked a policeman. No, no, I don't speak Russian. I showed him the paper with the words Kutafia Tower. He was kind. Next, I followed the direction to where his finger had pointed.

Hmmm... there's something white standing over there. Maybe that's the tower. And yes... the closer I got, I saw a young lady holding a flag with Metro something written on it. Phew. They, an American couple, and a German lady, all, were waiting for me. 15 minutes late. I felt bad for making them wait. I always consider it impolite to keep someone waiting without any notice. But I just couldn't help it.

Later on, when I read the reviews on Viator, it turned out I wasn't the only one who got confused by the name of location. In fact I was lucky, because in the end I managed to catch the tour. Some others just missed it. And... that had already happened half a year ago. How I don't understand why Moscow Free Tour and Viator make no effort to revise that sentence on the voucher. You know what, Kutafia Tower is not even exactly across Biblioteka Lenina Metro. You cannot see the tower from Biblioteka Lenina Metro. I can't help wondering, what's the intention by giving such a misleading direction??

Actually... that Kutafia Tower was almost just next to the music stage I've shown the photos above. Heeyaaa! Had I known, I needn't have to cross the street and most important, could have join the crowd much longer. I wanted to see how the costume of that man lying on the ground would look like. 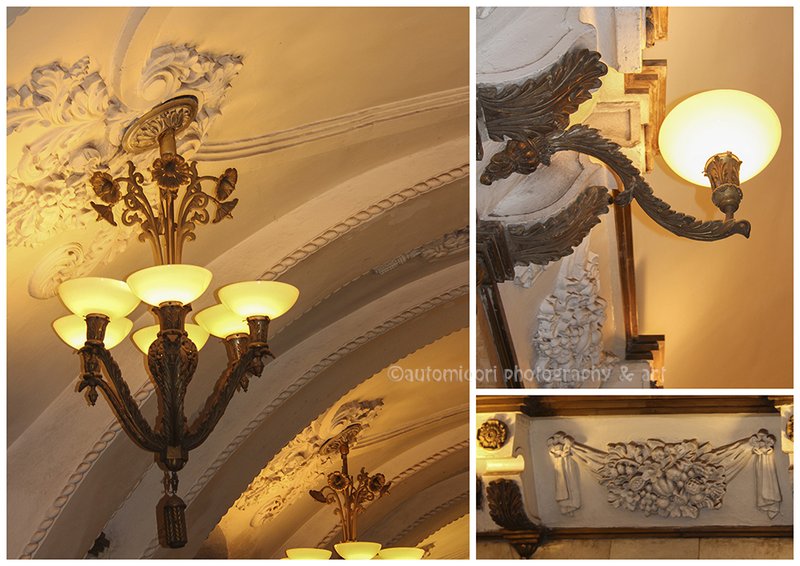 Oh... we are passing through a museum to get to the station... 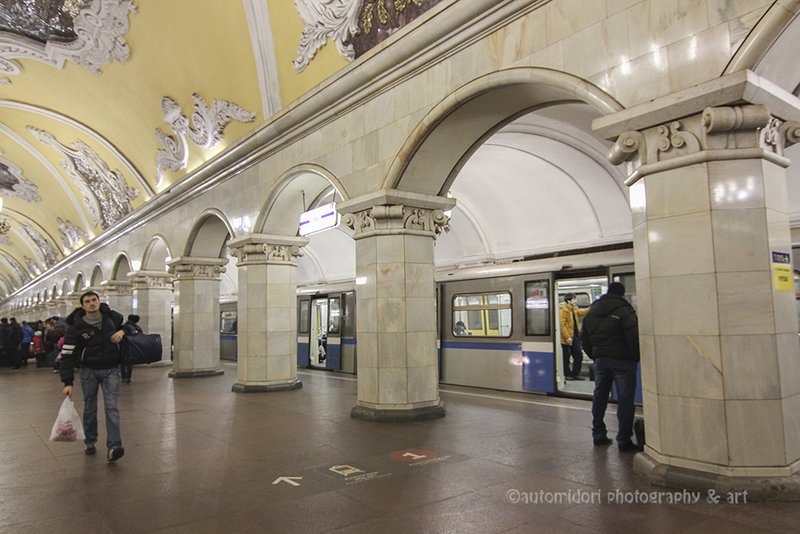 No, this is the station. Elena, our fantastic tour guide, brought us to five metro stations and each of them had a different style of design. Please note that I'm showing you the photos in random and these don't represent all the five stations I visited. This is just a glimpse of a picture. 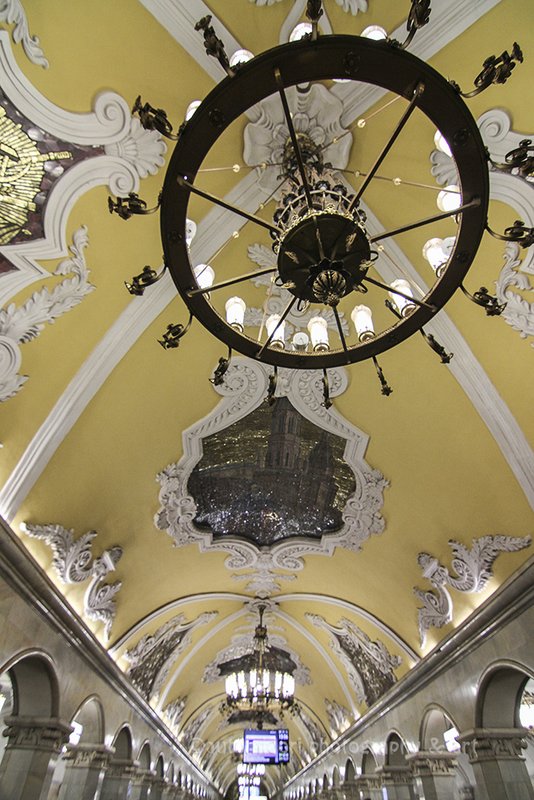 I had already read that Moscow's Metro Station is one of the most beautiful ones in the world. However, I didn't expect it to be this, beautiful. 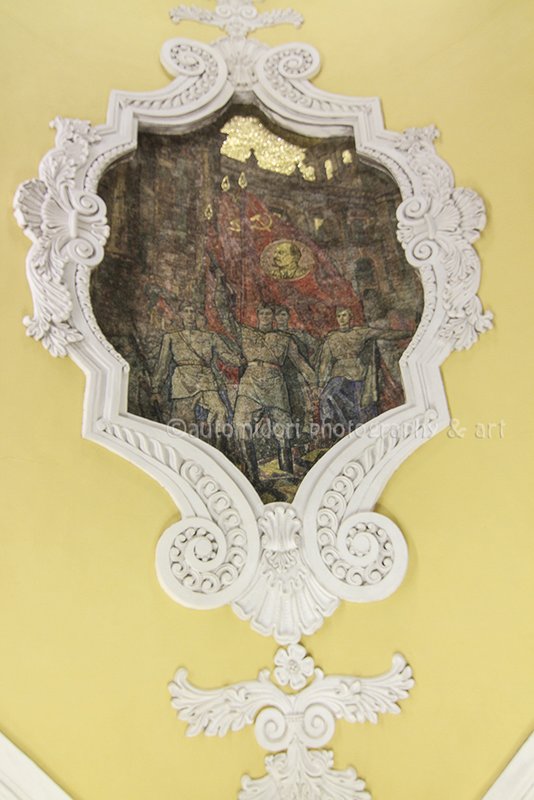 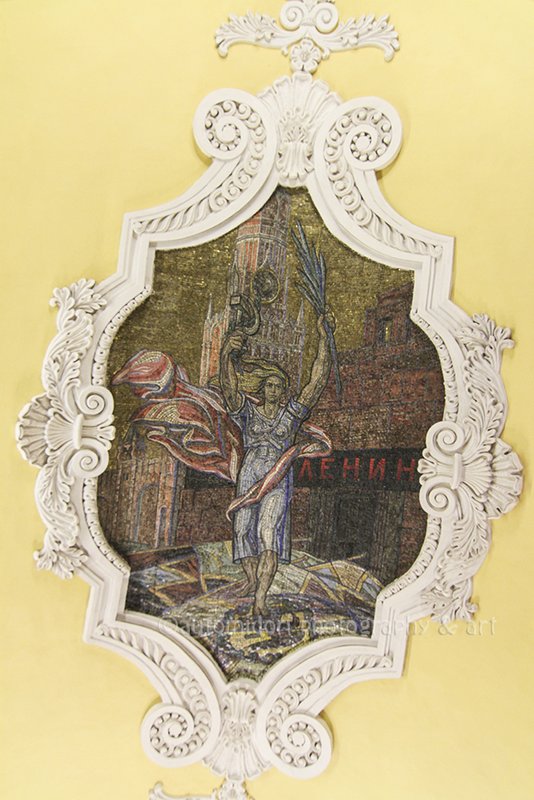 Every station had its story, and so did every painting on the ceiling. Elena was keen to tell them all to us, and I, had a hard time multitasking between listening to her and taking pictures.

Again, Stalin was much of a topic, as it was Stalin who commissioned the metro stations' construction. Unsurprisingly, he was painted on many of the paintings in the stations. And then, when he died, people replaced his face with Lenin's. On one painting, Stalin was replaced with a woman. I don't know much about Stalin and I believe everything falls for a reason. If people deliberately made the effort to get up to the ceiling just to replace Stalin on one painting after another, from one station to another, there must have been quite a reason for that. Bear in mind, that these are delicate paintings. However, regardless on whatever reason, I feel sorry for Stalin. It's just unimaginable to be hated in such a way. 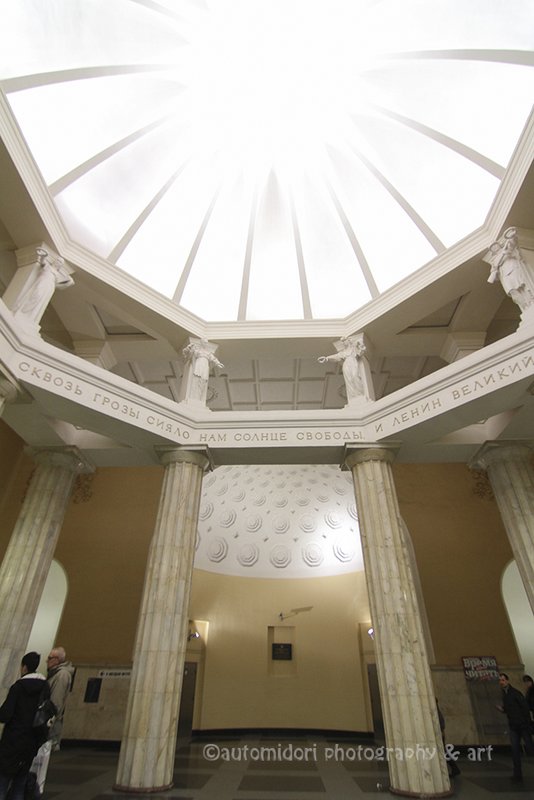 Over there, too, had been Stain's statue which was then demolished after his death. 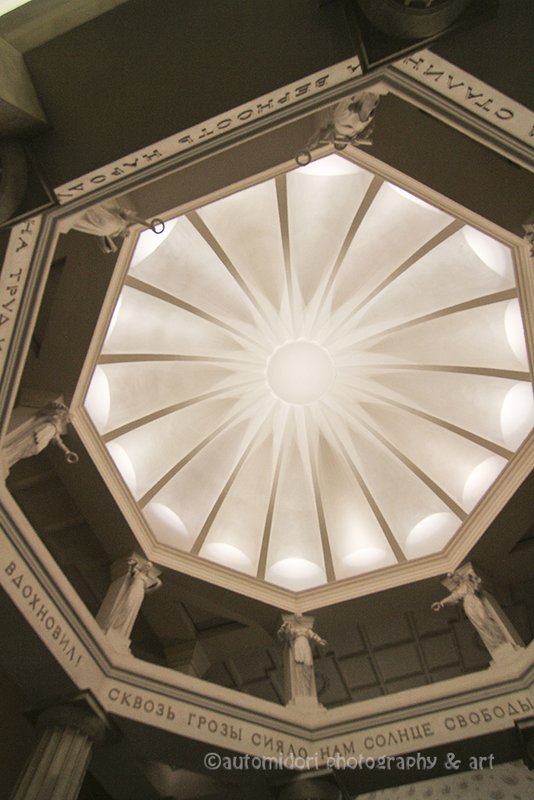 People had been thinking of erasing this writing as well, but eventually decided to keep it for history's sake. 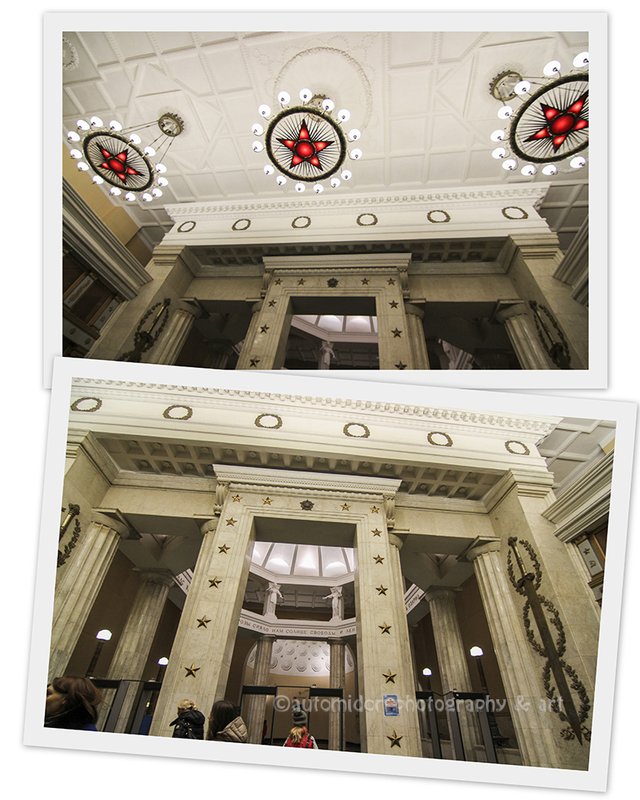 And here's the rest of the interior. Awesome, isn't it? Elena said, Russians love red. 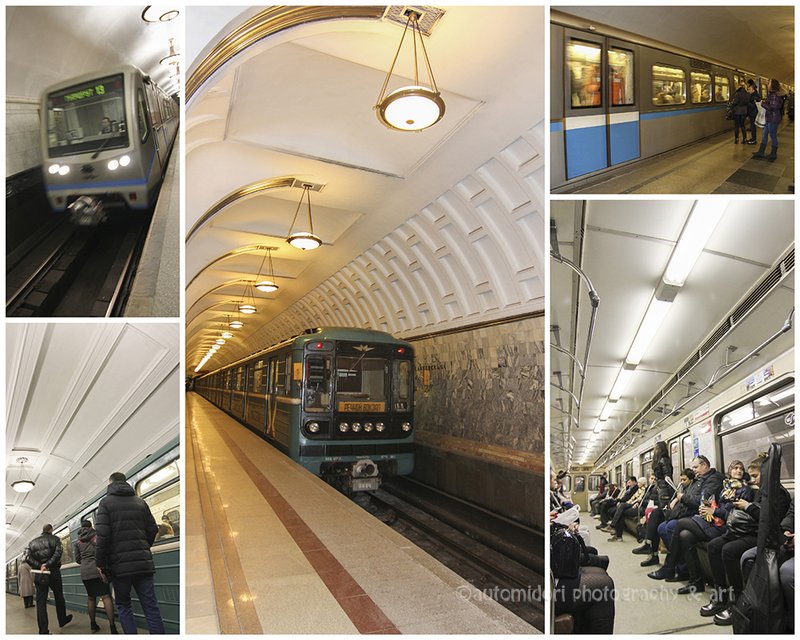 Like in China or Japan, the route of your metro can been seen on the wall above the door. All written in Cyrillic, though. Announcements on board is in Russian only. 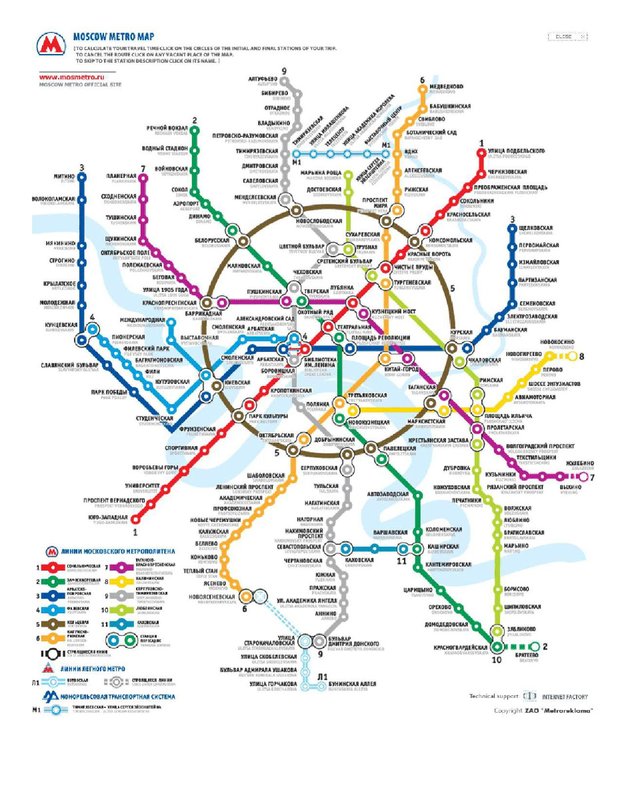 There's another story about Stalin here. While checking the Metro design, Stalin put his mug of coffee on the drawing which left a circle stain on the drawing. The architect thought that was what Stalin wanted. Hence, the circle route.

"Is that a true story?" I asked Elena.

Hey, hey! There's free WiFi on board, you know! 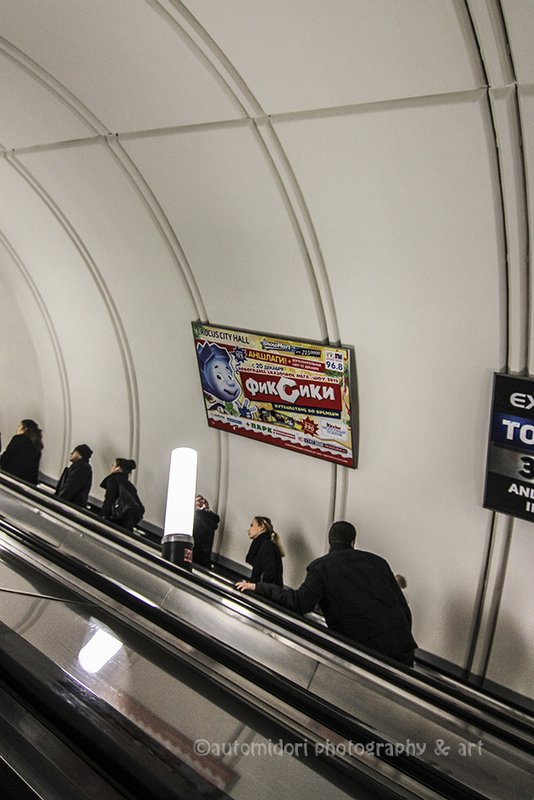 I think, I have failed to picture how steep and long the escalator was through a single photograph. Sometimes I just kept my eyes downcast to avoid getting dizzy.

"Oh, here it's opposite to Japan," I told Elena as we rode the escalator. "In Japan, people keep left and give way for people on the right."

"Really? Do they drive on the left side or right side?"

"Maybe that's why. Here we drive on the right side."

"I didn't know this has something to do with driving. In Malaysia, people also keep left. It's frequently written over the escalator minding people to keep left."

"Oh, it's the same too in your country?"

"How about in your country?" 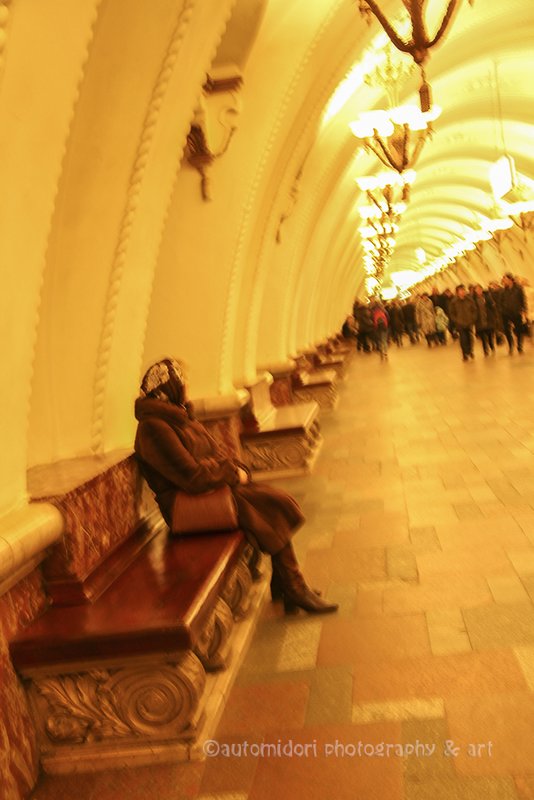 And then if your vision happens to get blurred because of either too much surfing the net while on board or of the steep escalator, there are marble benches to rest on. 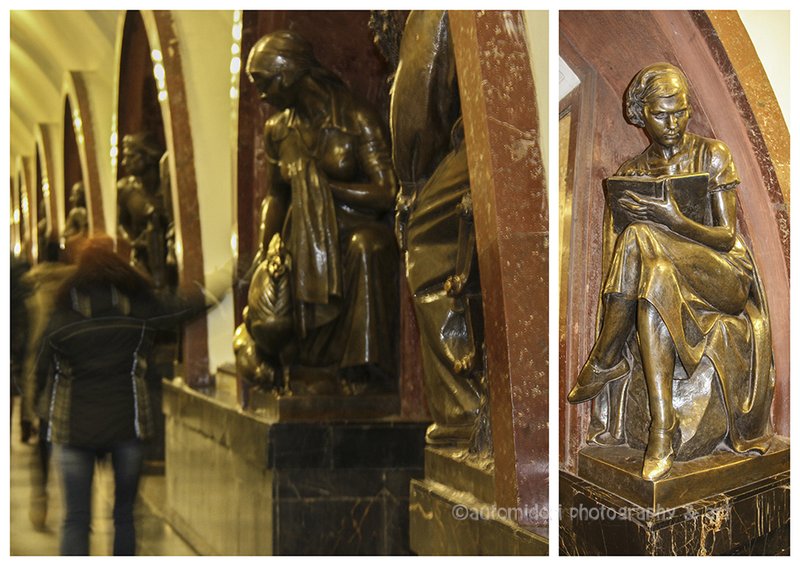 Adding to the abundant cathedral on every corner of Russia, as such, is for me just unthinkable how could Russia be once a communist country. According to my stupid understanding, being a communist means not believing in any form of supernatural power, including superstitions. I read somewhere that in of the Metro Stations in Moscow there's a particular part of a woman's statue which has significantly worn off due to being touched over and over and over for particular good luck. At that time, I thought, it was just that one statue. No it's not. There are several, and not just woman statues, but also dog statue. In every touch of various parts, there's a particular fortune to be expected e.g. romance, fertility, health, success on school examinations, etc. And then I thought again, ah maybe that was in the past. Nooo! These Muscovites are still practicing it today. Regardless on how they appear to be busy and in a hurry, they saw to it that they rubbed the statue on the "appointed part". 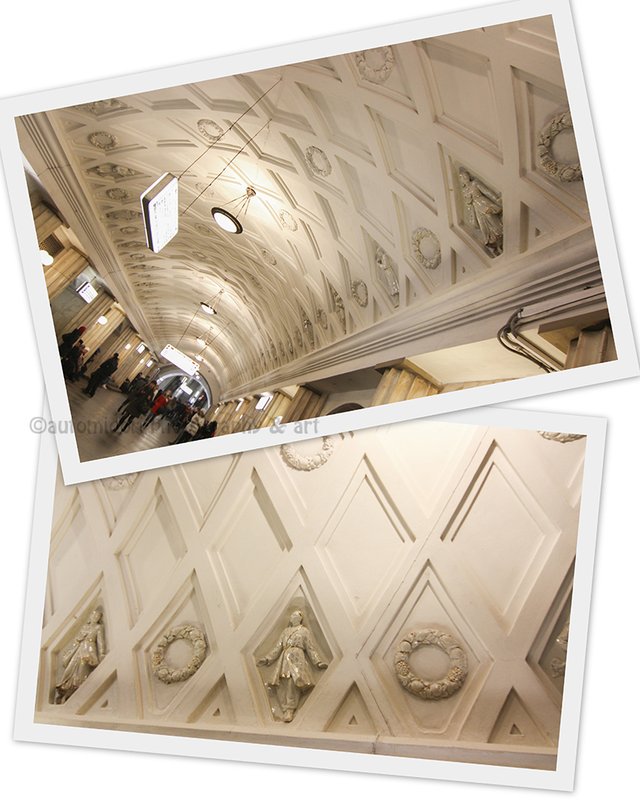 Let me show you a little more of the elements, and some more paintings. 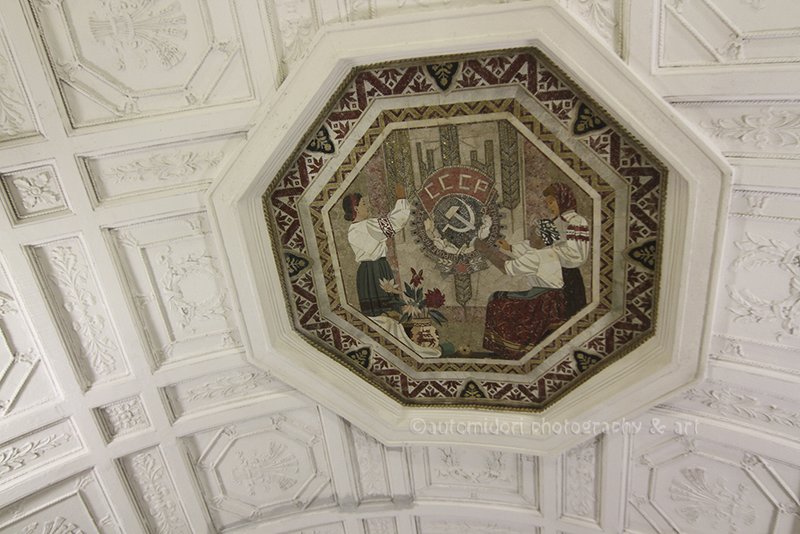 If I remember correctly, the paintings here tell the stories of Belarusian culture. From here, Belarusian Metro Station, one can travel directly to Belarusia. 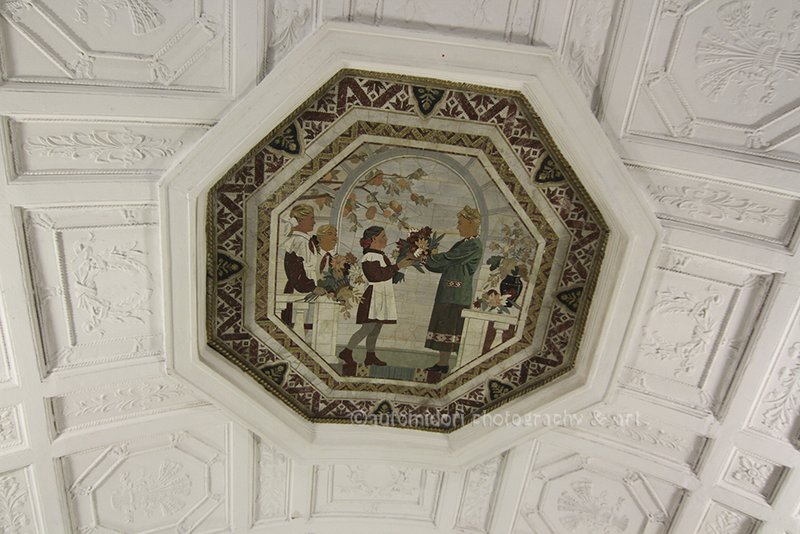 "Was he, he? Or had he been Stalin?" I asked Elena earnestly but everyone laughed.

Elena answered, "No. He had been always there from the beginning." 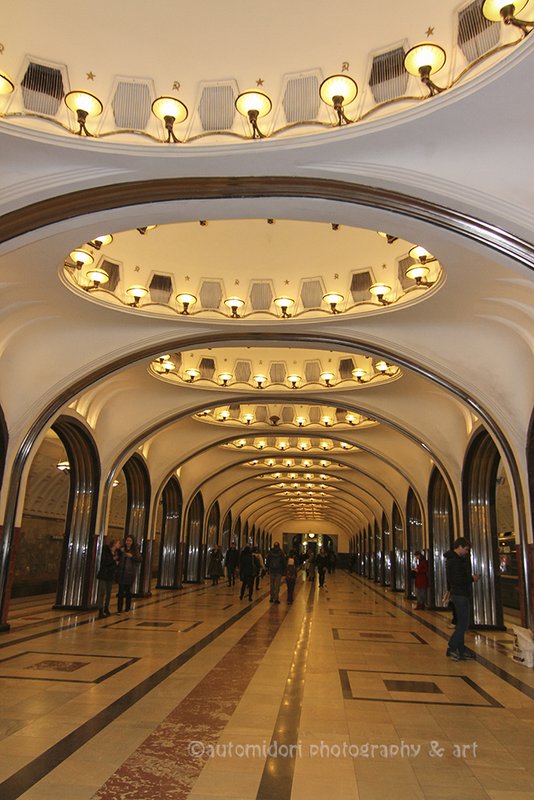 My favorite of all stations visited: Mayakovskaya Station, because I admire sculpture and curves but adore simplicity.

I really enjoyed the story about Stalin's coffee and the circle route! It's fun!

I feel sorry for Stalin too. You know, there were years of 'De-Stalinization' after His death in 1953... And many people think it was wrong. As well, as destroying all the monuments of the Russian monarchy after 1917...

And one more comment. The metro stations map at Your picture have station names written not only in Cyrillic! Notice that gray words under each black title!

Thank you, Aleksandr, for dropping a line.

"The metro stations map at Your picture have station names written not only in Cyrillic! Notice that gray words under each black title!"
--> Yes, I know that. Maybe you are commenting on my paragraph: "Like in China or Japan, the route of your metro can been seen on the wall above the door. All written in Cyrillic, though. Announcements on board is in Russian only." ?

If that's so, note that I was talking about condition inside the train, on board, not about the map.

Oh, sorry. I was inattentive. Maybe because the words '...Russian only' are near the picture.