It was in Moscow

I sat here unable to believe this is the capital city.

Contented with Russian Pancakes and Salmon and a great cup of RAF Coffee, I searched Nokia HERE for directions to the Jewish Museum and Tolerance Center. I was full of confidence, because I thought I had been on many public buses in many cities of Russia. I didn't know how many was many.

Bus number 19... oh! That's it! It seemed that I arrived at the bus stop just in time. I ran to the bus... but suddenly, oopss! People are tapping a card on something next to the driver's window. No bus conductor like in those 'many cities'. And it's obvious that the steel gate inside won't open without having the card tapped. I don't have a card. Pause. Those behind me moved pass me onto the bus with a slight look-back probably wondering what had held me back whilst I had been super enthusiastic running for the bus.

I waited for the next whatever-number bus to come, just to check out how the system worked. Usually this is what I do when in a new city. But, as I said, I had been overconfident. Approximately a minute later, another bus came by. Correct. Passengers get on one by one, swipe his card, rotate the steel gate, and gets in. Where can I get that card?? Ah, this looks like the new system on Transjakarta in my hometown. But the thing is, in Jakarta, there's a human bus-attendant at each bus stop. Here, we are merely fellow passengers. Another bus number 19 came by, and left. Still clueless.

I typed on my e-translator: "Excuse me. I don't have a card. Can I get on the bus with cash?" But, I felt hesitant. Whom shall I ask?

After battling with stupid shyness, I approached a young lady expecting that she somehow spoke English. No, she shook her head. I showed her my e-translator on my smartphone. Then she smiled very wide. "Yes!" she said. Yes??

I typed again: "How much is the fare?"

With her finger she gestured "one".

"One? One hundred?" Because for sure it couldn't be one ruble.

I took out a one-hundred ruble banknote from my purse. "This? One hundred?"

"And then where should I insert the money?"

With my hands I formed a box meaning it as a cash machine, held the banknote between my fingers, and moved it forward. Again she nodded and said, "Yes!", twice.

The third bus number 19 came. Everybody stood neatly in line in front of the door. So did this pretty young lady. But, she just stood aside, and didn't tap her card. When everyone had already gotten through the gate, she stepped forward towards the bus driver's window. She said something to him while pointing at me. Oh. It's about me. I handed her my one hundred ruble banknote. She passed it over to the driver.

The kind lady tapped her card, pushed the rotating gate forward and got through, but stayed there. Like a monkey, I imitated her tapping my brand new card and pushed the gate. Ops! It's stuck.

Over the gate, the lady reached for my card and re-tapped it on the machine. Then a green light turned on. Oh. I had tap my card in the wrong position. Once the light turned green, the gate became 'pushable'. 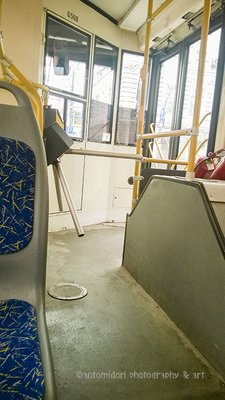 This is how the gate looks like from inside. That little window on the left is the driver's window. That black and yellow box above the pivot is where a passenger taps his card and where the green light is installed.

I sat here unable to believe this is the capital city.