Inside and Out, the Buildings and the People

In haste I put on my coat, shawl, hat, hand gloves... and rushed out the Jewish Museum and Tolerance Center. A little less than an hour was left to get to Lubyanka Square, the meeting point of my Communist Moscow: Evening Walking Tour. I didn't want to miss this tour, because it's already paid. Hence, in fear of loosing the money, I lost the ability -- which I actually don't have much -- of reading my map.

Once again, a series of Russian kindness became part of experience. A young man at the traffic light kindly ignored the light when it turned green, but continued checking his smartphone for directions to Lubyanka Square. Then he confirmed that my printed-out Google Map was correct. But the thing was, I lost direction to get to the Metro Station. He told me that I'd better take a bus to the Metro Station and that I could come with him, because he was going to take the same bus. So at the next green light, he and I crossed the street, and walked together to the bus stop. Proudly, I tapped my card on the machine like a Muscovite. Yay! Push, turn, I'm in. Luckily, I had already learned this from the young lady this morning. Otherwise, it would be too much for this gentleman if he had to teach me also how to pay the fare.

The lady at the Metro ticket box kindly checked on the Metro route map for Lubyanka Square and taught me which direction the platform was. However, on the platform I got confused. On which side is my Metro, left or right? "Look up!" as if someone had told me. There hung a panel of names. Hmmm. Must be route names. I see! I compared the Cyrillic on my map with those on the panel board, like comparing pictures. Gotcha.

Now, now, which exit leads to Lubyanka Square? I asked the man in the booth at the end of the escalator. However, he looked away instead. Oh no. Am I running out of luck? Suddenly, a lady was already standing next to me. "Can I help you?" in English. She then became my interpreter and to my surprise, that man in the booth answered her with enthusiasm. Oh so maybe he was just shy when he saw me, a foreigner. Thus, looked away. This lady asked me further what I was looking for. She mentioned an exhibition, museum, or something, which she said was already closed by that time of the day. "No, it's just a meeting point with a tour."

Last, a policeman at the exit tunnel pointed the direction to Solovetsky Stone Memorial for me.

So why at Solovetsky Stone Memorial? Because the stone is a stone from the Solovki Prison Camp. Solovki Prison was the "mother" of Gulag. Gulag was the government agency that administered the main Soviet forced labor camp systems during the Stalin era. And Stalin, was General secretary of the Central Committee of the Communist Party of the Soviet Union. Hence, Communist Tour today. Communist Moscow: Evening Walking Tour, to be exact. And, I was 80% into the "walking" but only 20% into the "communist".

Lubyanka Square itself is well known as the KGB's headquarters, Russia's secret agent. Here, I quote a paragraph which is similar to what my guide had explained to us:

The Lubyanka was expanded in time to include three buildings, the most commonly recognizable being the yellow brick façade of the original building which housed the Lubyanka prison on the ground floor and the offices of KGB heads on the third floor. The grounds of the Lubyanka were the scene of some of the worst of interrogation and torture methods and were especially used to executions during the reign of Stalin. For many Lubyanka was their first stop prior to execution or deportation to the Gulags. With the fall of the soviet union in 1991, angry crowds pulled down the statue of Cheka founder Felix Dzerzhinski which had previously dominated Lubyanka Square, a symbolic action of the people reclaiming the power of fear once held over them by the KGB. Visitors can now tour the KGB museum on site, lead by former KGB agents.

Those Gulags were mostly in Siberia. So, Siberia, my guide told us, was like Australia to England, a place of exile. However, listening to her explanation, I guess Siberia was ten times worse. I shuddered as I had been traveling Siberia. Eeewww. Trans Siberia; Trans Exile. Every year on a certain date which I don't remember, the names of the victim of Solovki Prison, the mother Gulag, would be read out aloud at the Solovetsky Stone Memorial Park. So long was the list, that the reading would take like 24 hours non-stop while that date is somewhere around winter. Eeewww.

Adding to the existing ironies of Russia, next to the KGB headquarters, the largest toy department store in Russia has been built: Detskiy Mir or "Children's World". Similar to what my guide said, here I quote for you again:

Laughter is perhaps the best medicine in the face of adversity and the Russians have a few jokes pertaining to the Lubyanka. One joke says that it has the best view in Moscow because from within, one can see all the way to Siberia (location of some of the harshest Gulags). Ironically, Moscow’s biggest toy store stands opposite the site and has since 1957. Named Children’s World, the prison and KGB headquarters facing it was dubbed Adult’s World.

From Russia, I have somehow learned, to face adversity with humor. 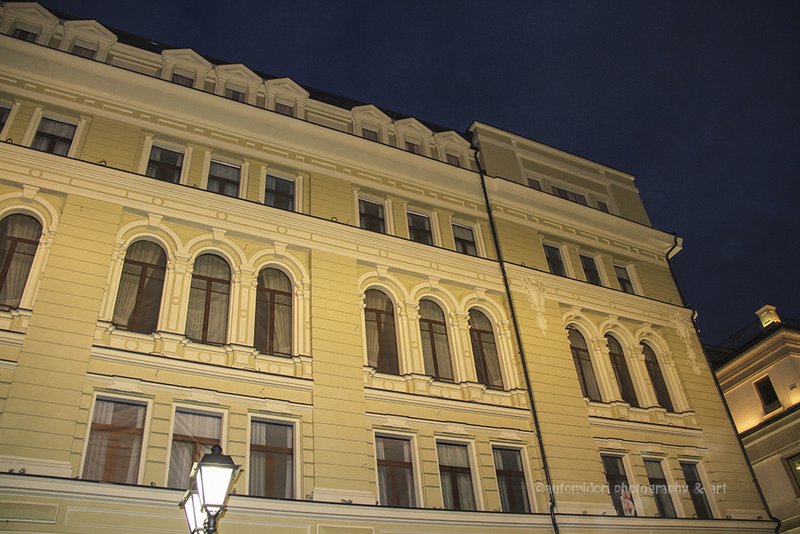 This building is under-construction. But, as adversity doesn't have to look sad, neither does constructions have to look messy. Cover the whole thing with a picture of the final look-to-be. Give people something to look forward to. Extend hope. 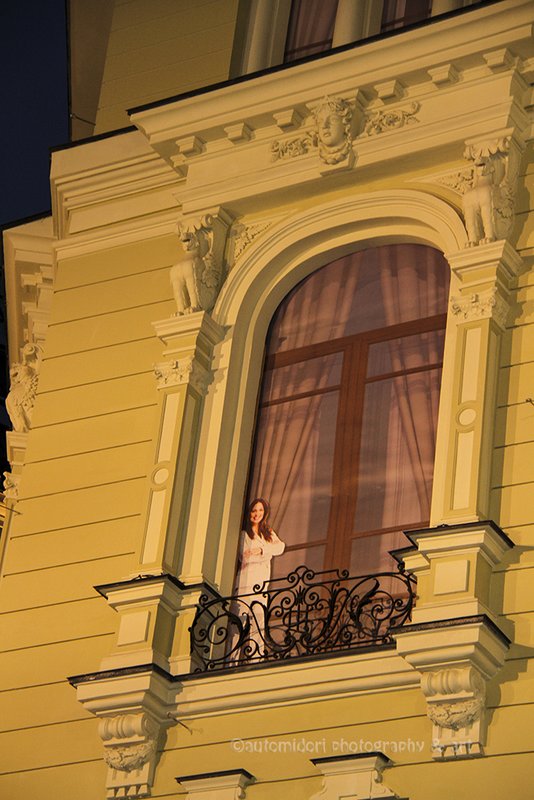 See? Someone is smiling at you. Aha. Bear in mind, it's two dimension. 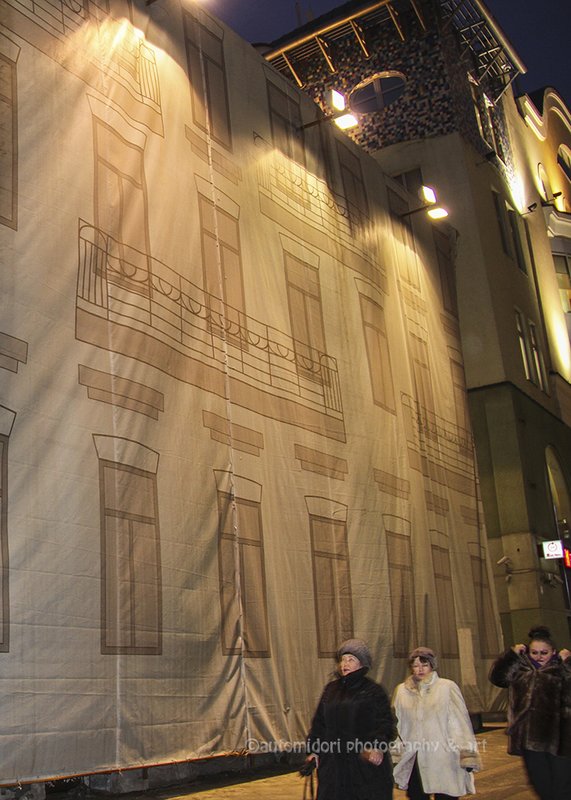 And here's the three dimension. Aha. 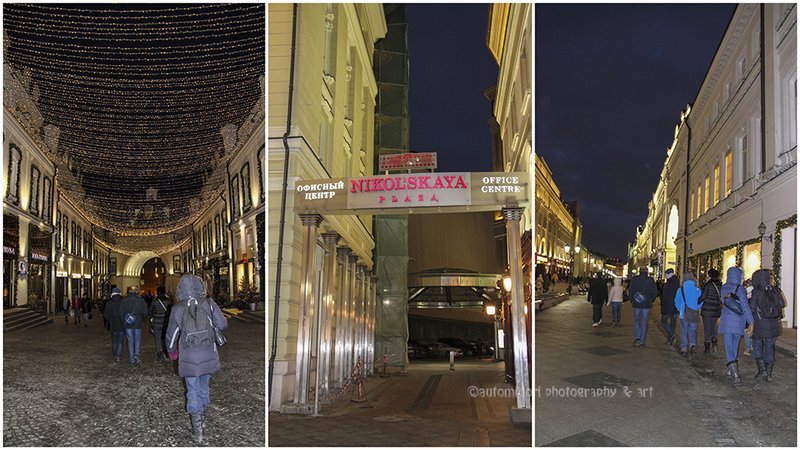 The evening walk continued to Nikolaskya Street which was guarded by exuberant shops. 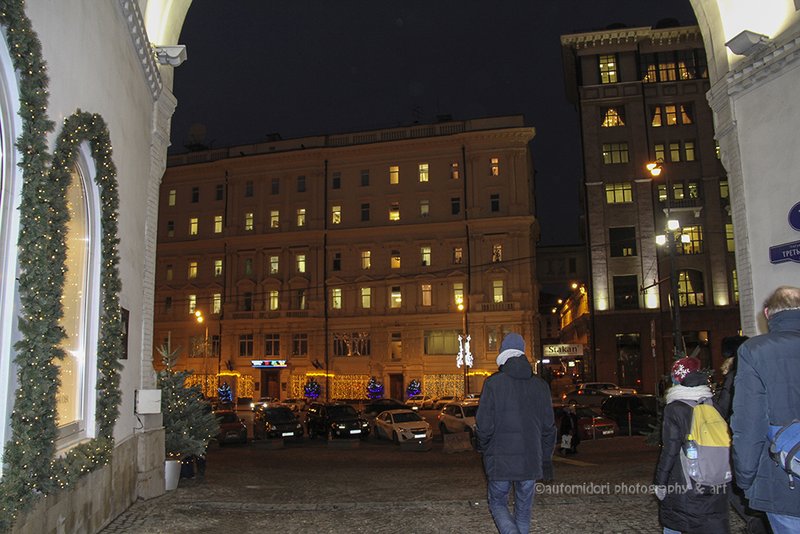 This was how we walked the communist evening. Aha.

When my plane touched down Domodedovo, I was like, "Oh, is this called winter? In Russia?" Let alone fluffs of snow like when I landed on Harbin, or white covered runway like when I landed on Sapporo. The only sign that it was (probably) winter was the bare trees. The next morning, I was like, "Hmph. This is probably my warmest winter experience ever." But the climate heard me.

My European and American fellow tourists kept their hands in their pockets. When we stopped to listen to our guide's explanation, they took the chance to rub their hands. I, regretted not putting on more vests and leggings while I actually had dragged along a stack of winter purpose stuffs. 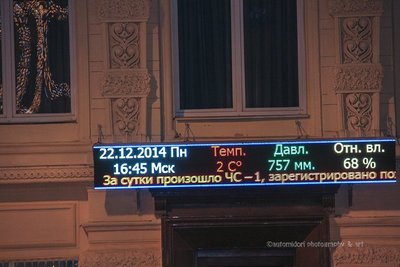 Moscow's temperature seemed to dropped just overnight. Elena, our guide, whom I had joined yesterday for the Metro Tour, also confirmed that it wasn't this cold yesterday. Now, she only took her hand gloves off when she wanted to show us photographs from her smartphone. Fine. If these people feel cold, then I'm okay.

One of the photos Elena showed us was the long long queue for Soviet Union's first McDonalds in 1990. Quoting from Bridge to Moscow:

At dawn on 31 January 1990 more than 5 thousand people came to be the first at its opening. That day Moscow McDonald's set a world record: it served more than 30 thousand visitors. People stood in line for over 6 hours, willing to get a taste of this unusual food. At that time it was the first fast food place in the whole country. It had more then 700 seats inside and 200 outside. It was once the largest McDonald's in the world.

Our guide emphasized that it was winter by then (31 January), and people were willing to queue for hours.

The arrival of McDonald's in Moscow was a small but certain sign that change was on the horizon. In fact, less than two years later, the Soviet Union ceased to exist as a nation, Mikhail Gorbachev resigned as leader of the country, and various Soviet republics proclaimed their independence. As the American newsman reported, the first Russian McDonald's customers "had seen the future, and it works, at least as far as their digestive tract." 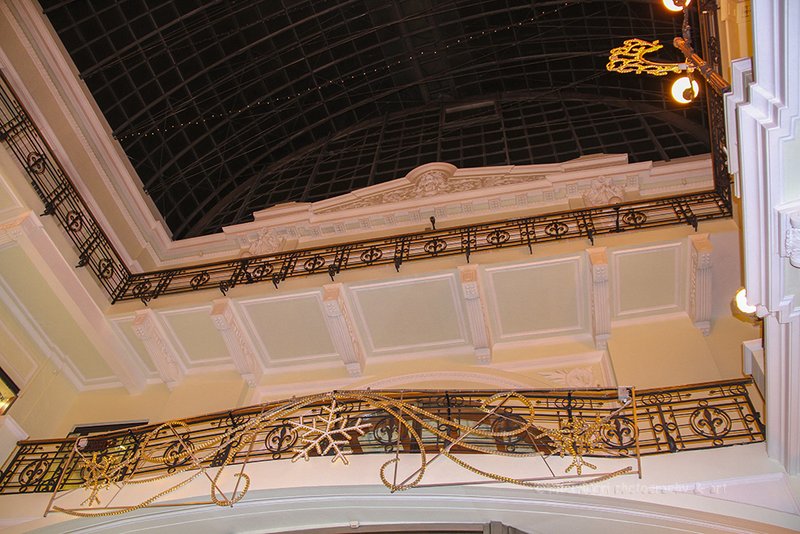 Oh yeah, I forgot to show you the interior of Nikolaskaya Plasa. 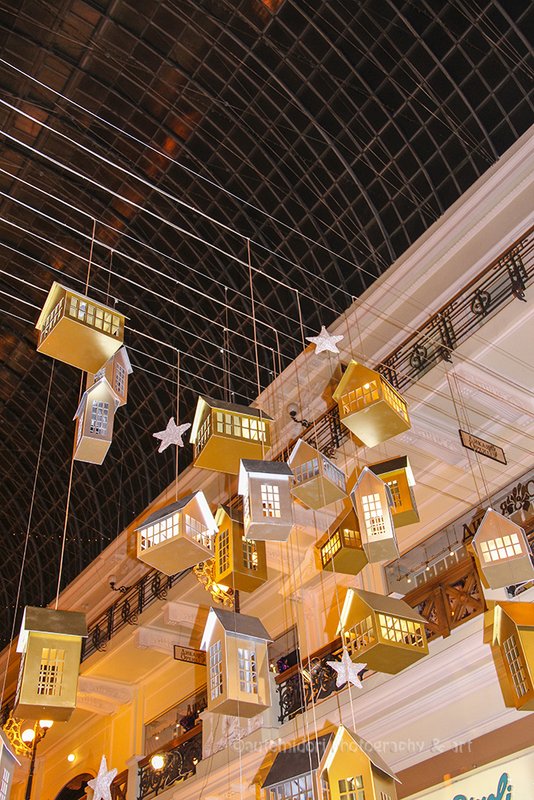 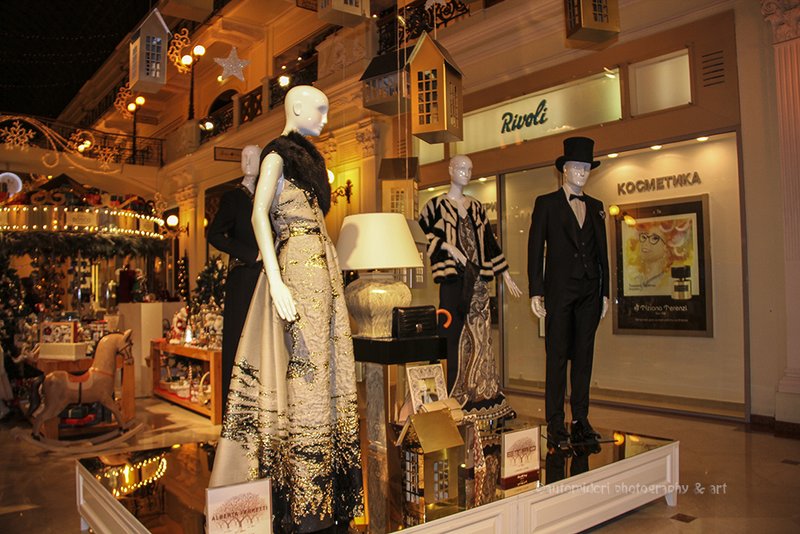 "Is it okay to take pictures here?" I asked Elena, our guide.

Elena stared at me for a second. "Taking pictures? Of course you may!"

"Errr... in my hometown it's most of the time not allowed to take interior photos inside a shopping center especially this grand. You must have permissions. It's not written, but someone would come and ask to pay, especially when using a big camera like this."

"Pay??" replied a fellow Italian tourist. "What is the money for?" 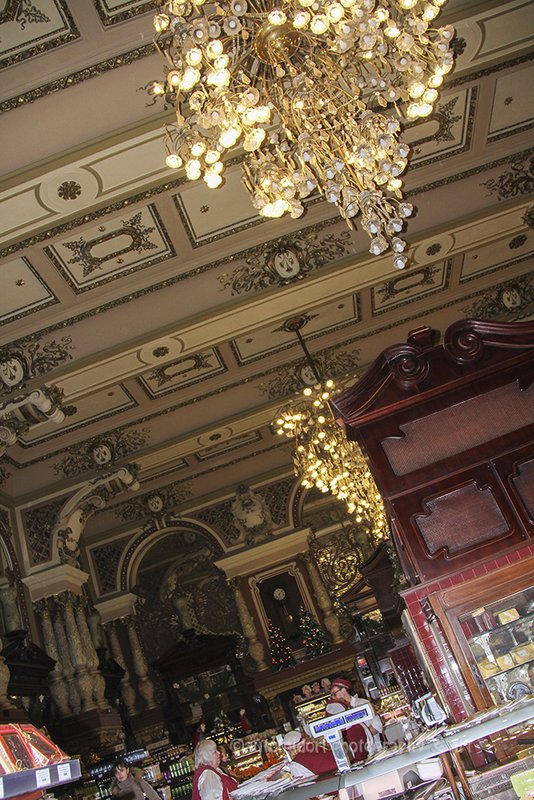 Wait. Is this a grocery store or a museum? "May I take pictures here?" I asked Elena again. The way she replied reflected that it was completely okay but she wished she had an answering machine. Aha. 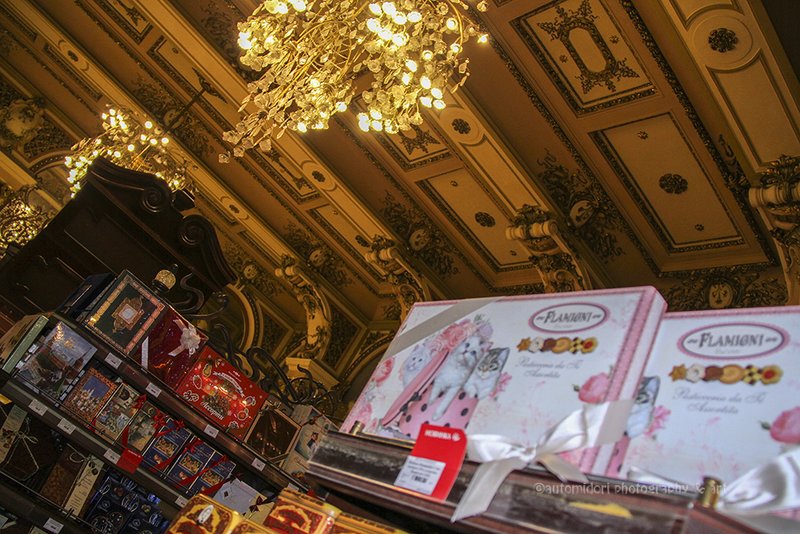 This Eliseyevsky Grocery Store opens 24 hours. Well, unsurprisingly, this wasn't meant to be a store in the first place. It had been a palace. You can read the full history here. Grigiry Eliseev was the millionaire from St. Petersburg who bought this house and transformed it into "the Eliseev Store and Russian, Foreign Wine Cellars". Today, the trading network "Alye Parusa" managed to combine the form of trade in counters with a modern supermarket harmoniously.

The best caviar you ever know awaits you, here, in Eliseyevsky Grocery Store. 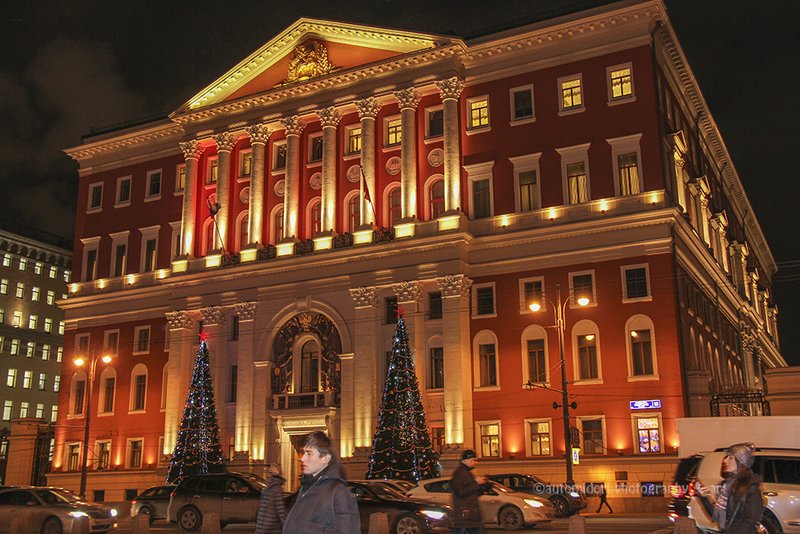 Still within the neighborhood is the building of the Mayor’s Office. I don't remember which building exactly it was which Elena told us had been removed simply like moving a toy house. The reason was that Moscow became more crowded that they needed a broader street. For that purpose they removed the buildings. They 'just' dug down under the foundation and lifted up the whole building with everything inside it. 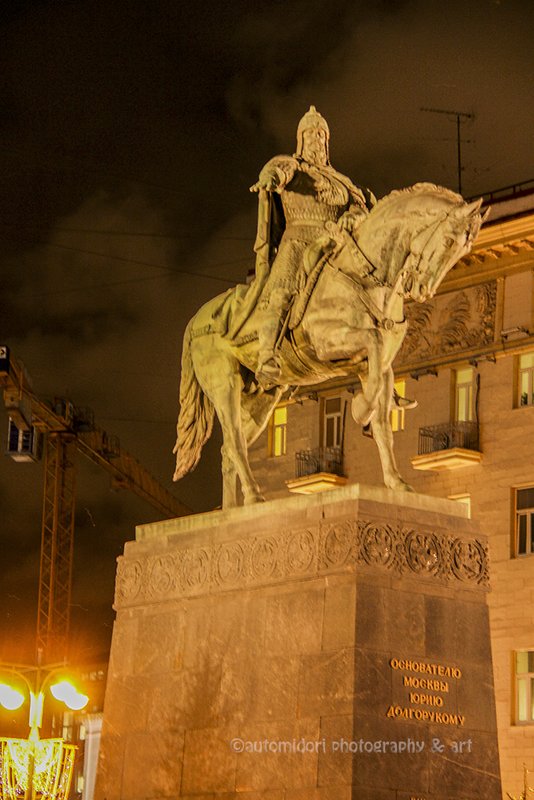 Right across to the Mayor's Office is a memorial to Yuriy Dolgoruky, founder of Moscow. It was laid down during the celebration of the 800th anniversary of Moscow in 1947 on modern Tverskaya Square.

Being told that our guide's parents grew up in Siberia, a fellow tourist asked her, "How was life in Siberia at that time (her parents' time)?"

Her answer, "It was hard, but my parents were happy, because their parents told them that they were happy."