Feeling warm and relaxed, I headed back to the street. Vladivostok seemed coming alive.

Aaaahhh, I forgot to take a picture of my cappuccino...

When you come to the intersection of Svetlanskaya Street and Aleutskaya Street, go down to the underpass. You shouldn't miss out the coffee shop. Guests kept on streaming in and out. Getting a table to myself was a bit a challenge. There was a Chinese family. I knew because I heard them talk. They stared at me and I stared back. Aha. Then there was a Chinese-looking guy and a Russian girl. They spoke Russian. The guy might be Korean, as down there southwest lies the border with North Korea. North Korea, not South Korea. Aha. And then there was a youngster with presumably, her babysitter. The babysitter had that Mongolian slanting eyes look. She painted her eyelids with thick dark eye-shadow make up. Afterwards I met a few ladies with such make up. I have the feeling they are trying to disguise their slanting eyes.

Whatever the reason was, it's here in Russia when for the first time I fully understood what my Russian friend said to me about his experience in my home-country. He said, "Why do people charge more on a foreigner?" That time I jokingly I replied, "Because we see blonde as gold." That time I thought it was a universal thing. Now I see, it isn't universal. At least in Russia. Regardless of my standing-out looks and my zero Russian, vendors, sellers, never attempt to take advantage over me. I could be an easy prey. Remember my story about the food seller in front of Vladivostok Railway Station?

I'm curious to find out whether Russia in the west is the same. Russia is the largest country in the world, you know. Hopefully, they don't change for bad over the vast distance.

Feeling warm and relaxed, I headed back to the street. Vladivostok seemed coming alive. People gushed up and down the stairs. Their thick coats occasionally rubbed against each other. 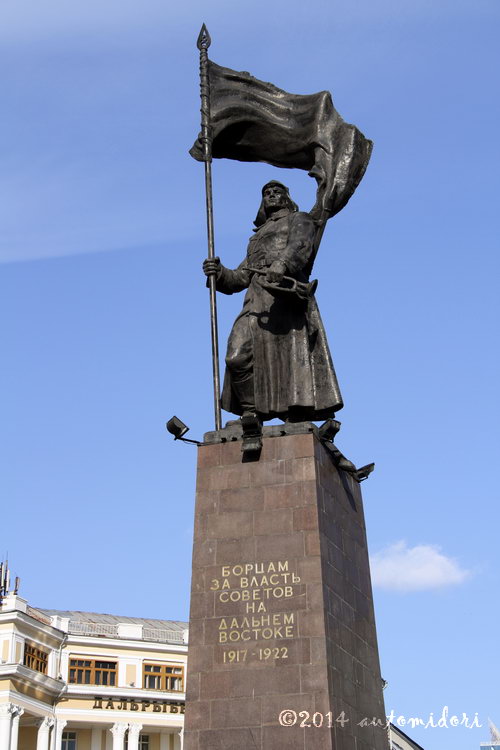 Here's The Monument to the Fighters for Soviet Power. Vladivostok's website said:
The sculpture of Red Army man holding flying banner in the right hand and combat trumpet, which announced the victorious revolution of 1917, in the left hand stands on the high pedestal in the center.

Furthermore,
The Monument to the Fighters for Soviet Power is one of the most famous and popular places in town where Vladivostok locals usually make appointments.
More than just making appointments, I would say. Let's see. 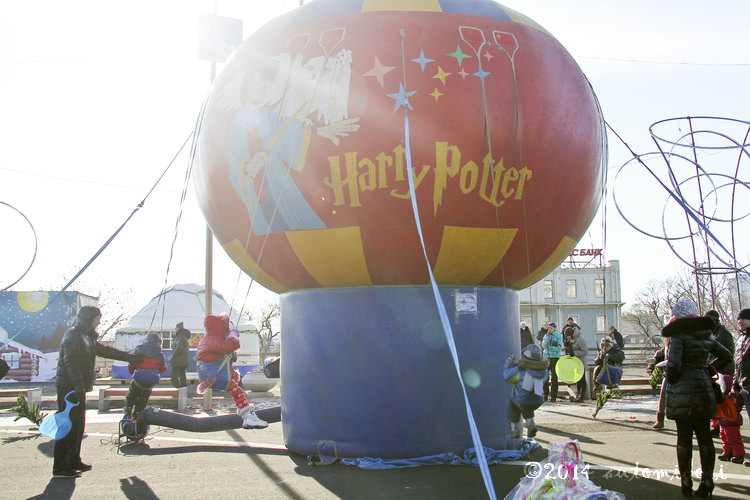 Why dread the cold and stay indoors? Come, put your kids on the swing! Give them a push and let them bounce themselves on the rubber pole. When they bounce back to you, give them another push. You are making yourselves warm, aren't you? Do you see that blue stuff in the man's hand on the left. Yes, that's for kids playing ice slide. And listen! Happy music band playing on stage.

I didn't take a picture of the stage, because something stole my complete attention. 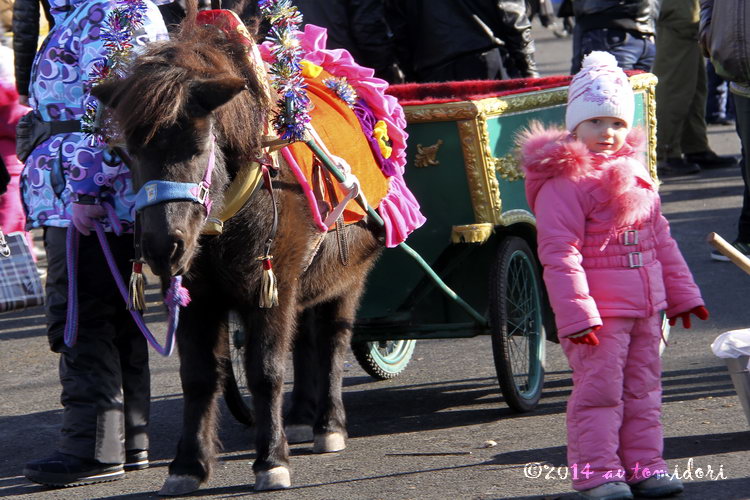 "Don't you think we are cute and lovely?" said Miss Pinky's look to me. 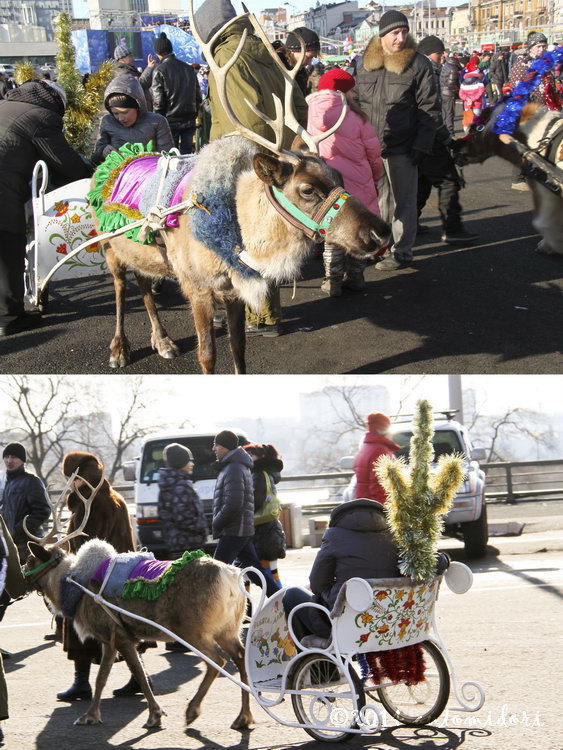 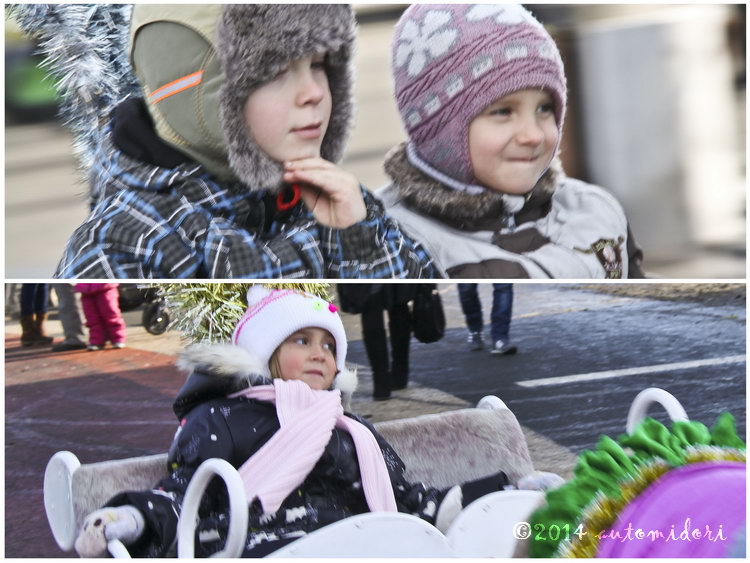 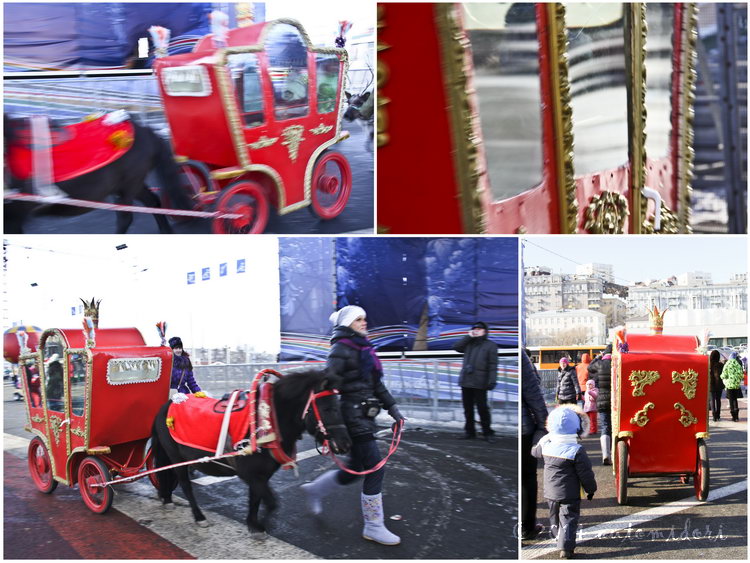 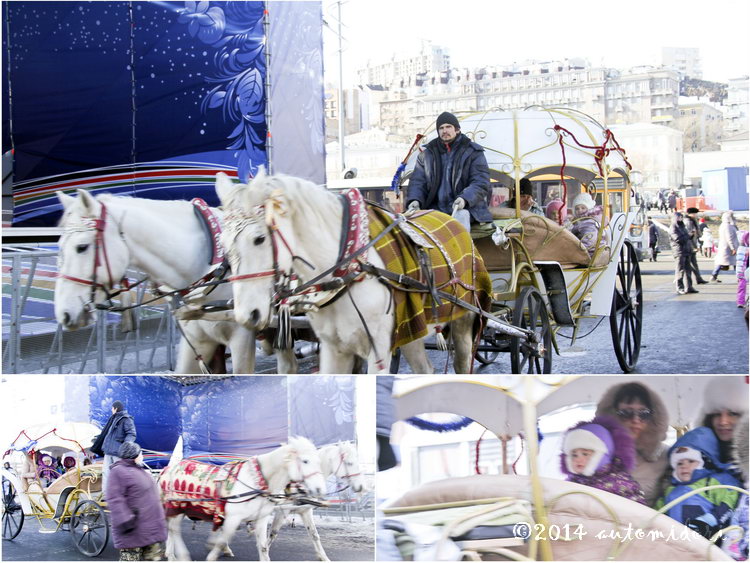 Or do you fancy a different style of the old days? Yeeehaaa! Kids and adults have the same right to have fun. Yeeehaaa! 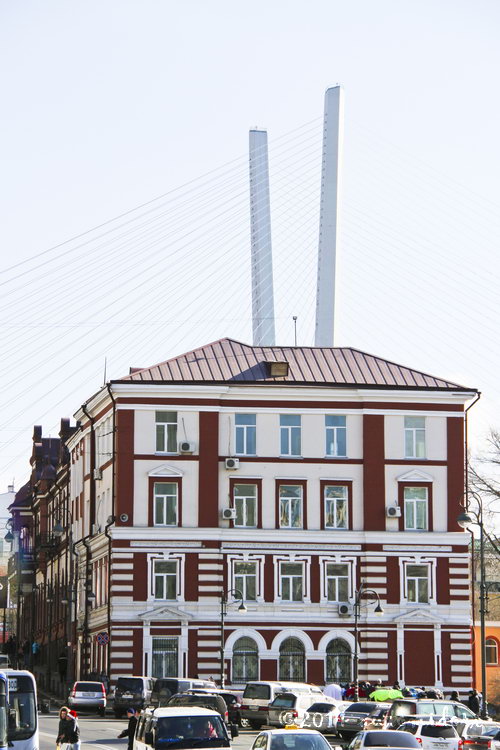 From The Monument to the Fighters for Soviet Power to the right leads to Zolotoy Rog or Golden Horn. You can see the tip of the horn pointing high behind the brown and white building. 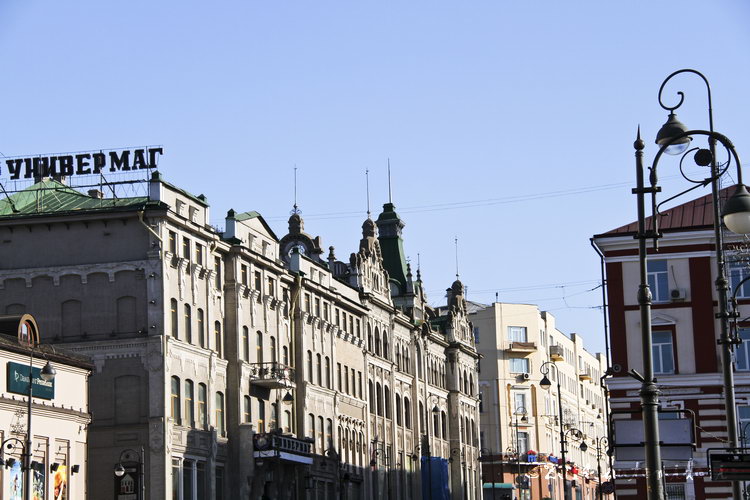 Not far across from The Monument to the Fighters for Soviet Power is Vladivostok GUM. That's the oldest trade facility. GUM is Russian abbreviation for main department store.

Vladivostok City's website noted:
Despite its youth, Vladivostok has many ancient buildings that have historic value and attract each guest's attention without exceptions.
Allow me to proof that. 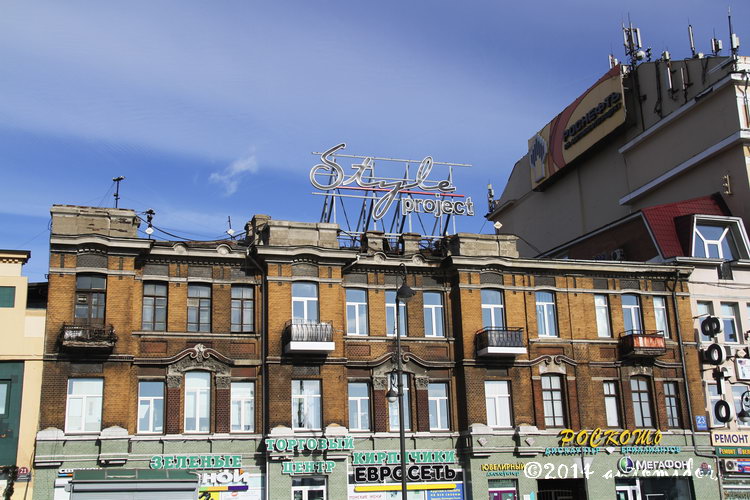 What I especially like about this building is the balcony. 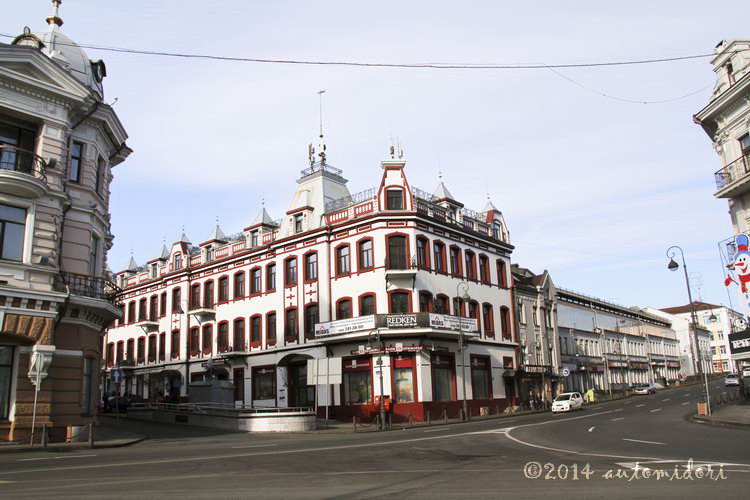 From The Monument to the Fighters for Soviet Power to the left, well... another underpass. 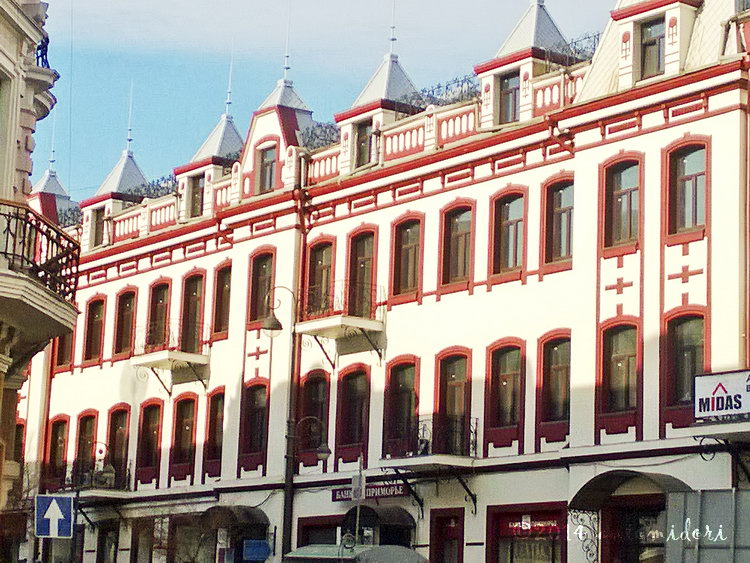 It's just a close up for building on Svetlanskaya 11. 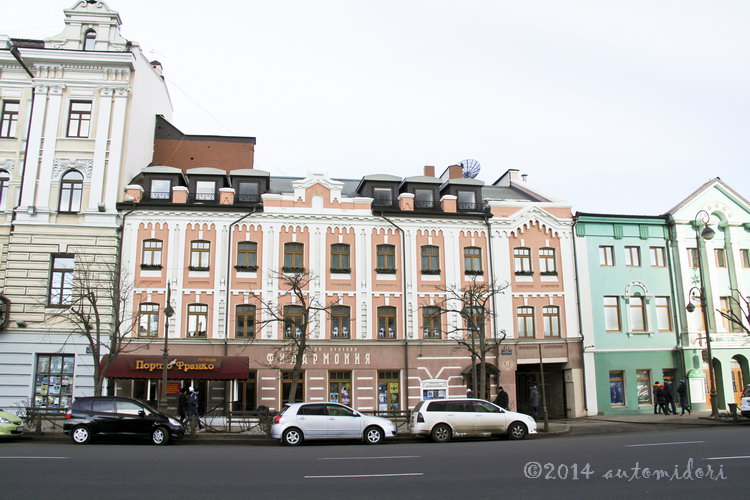 The modern view of traditional style. 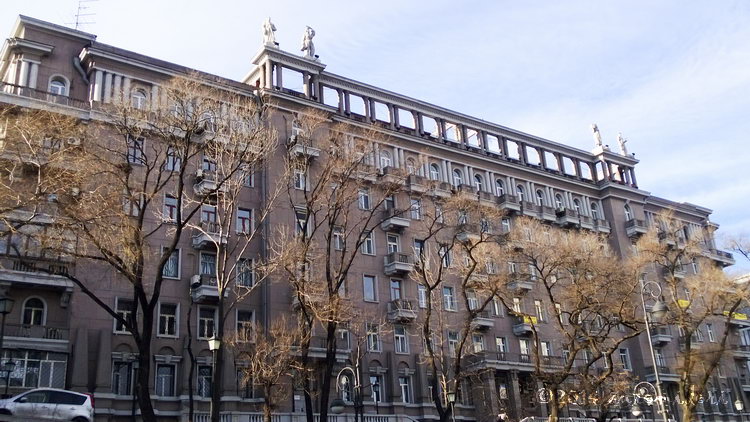 Another interesting architecture on Aleutskaya Street, on my way back to my hotel. By Lumia ;-)