You will not find any McDonalds restaurants or any trace of Western chain shops or hotels here, but locals feel that certain aspects of the town are on the cusp of being "Disney-fied" -- Wikitravel

In Moscow, we have seen the memorial statue to Yuriy Dolgorukiy, the founder of Moscow, who actually started his career -- if I can put it so -- in Suzdal. I quote from Wikipedia about Yuriy Dolgorukiy:

In 1108, Yuri was sent by his father to govern in his name the vast Rostov-Suzdal province in the north-east of Kievan Rus'. In 1121, he quarreled with the boyars of Rostov and moved the capital of his lands from that city to Suzdal.

In short, Suzdal in fact, got it's significance ahead of Moscow.

And I arrived in Suzdal with everything opposite to what I had experienced in Moscow: the surroundings, and the climate. There were no top brands, glamorous hotels, let alone metros. The ground was buried under snow. The air was filled with fluffs of snow. Let me show you. 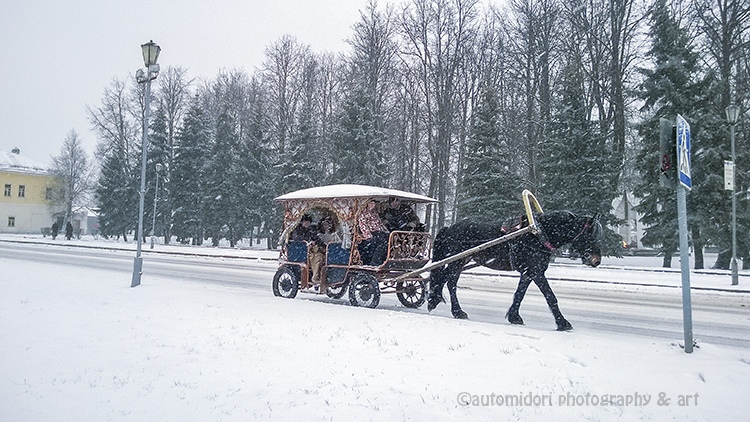 As an old city that stands still in time, Suzdal is today on the itinerary of many tourists in Russia, although I assume are mostly Russians. The touristy atmosphere was emphasized by several tourist carriages such as this one. When I zoomed in the photo, I realized that the coach had been greeting me. 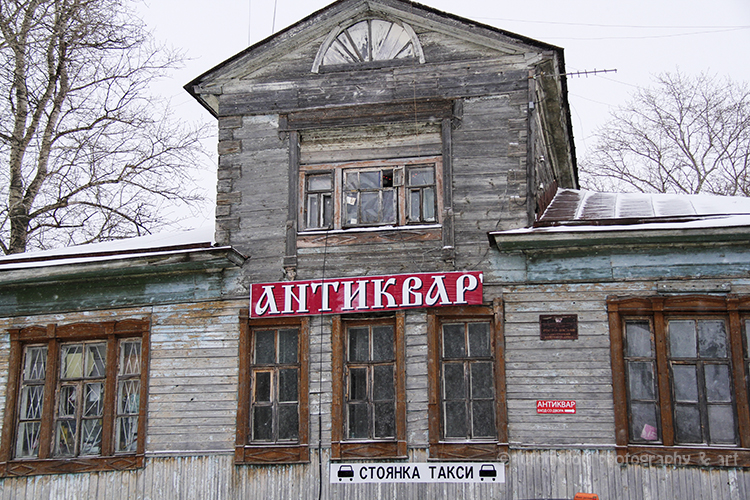 Antique Bar? Or do you need a taxi, instead? 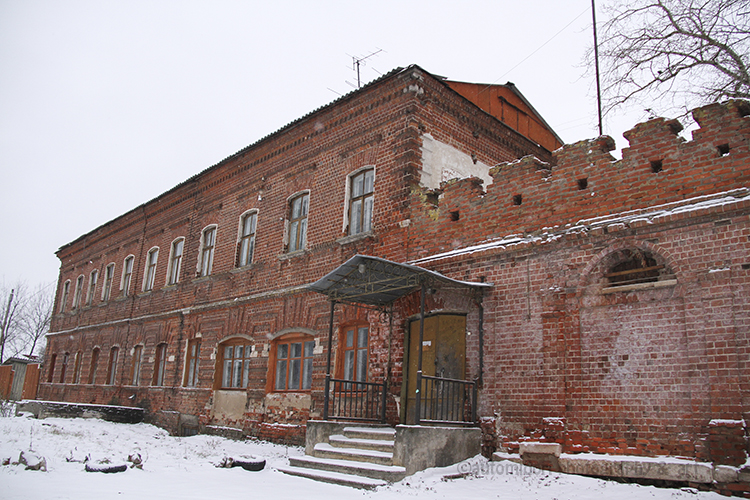 I heard that fortresses had been built in Suzdal. I wonder, if this is the remnant of one. 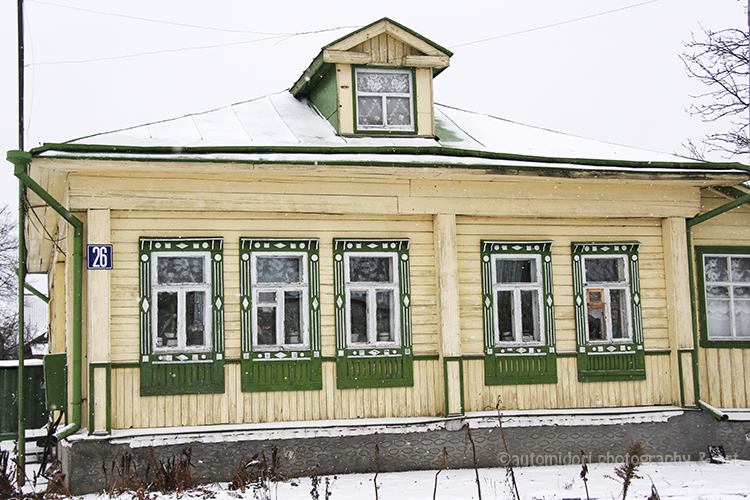 Wikitravel says: a number of wooden structures from other parts of Russia were transported here, and the whole city was converted into an 'open-air museum'. That's very true. 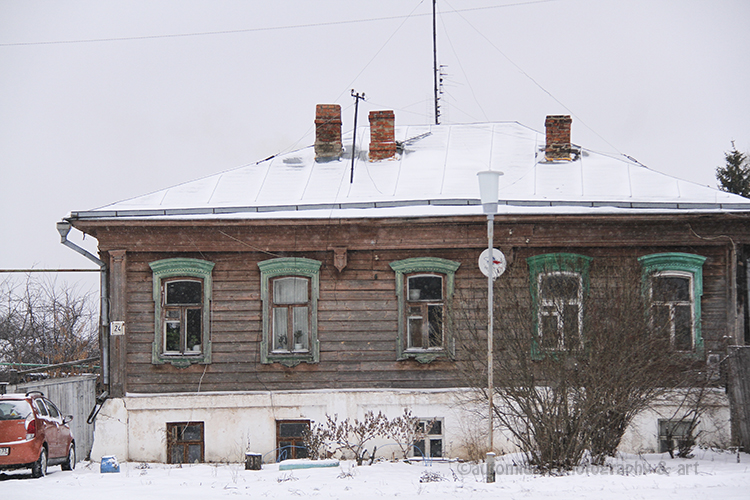 Uhm, windows on the ground. You won't believe it if I tell you I'm always fascinated by windows of semi-basement like this house. 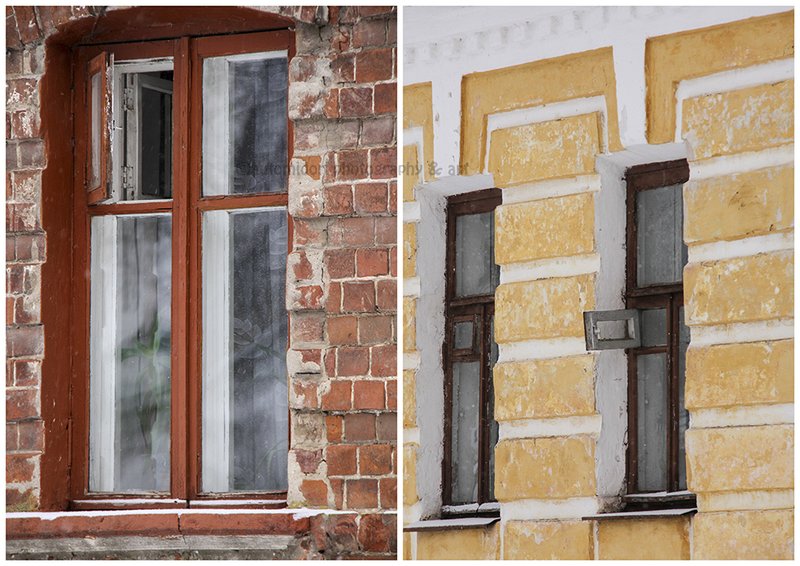 But of course, as many of you probably know already, my greatest fascination is about the little window sashes. 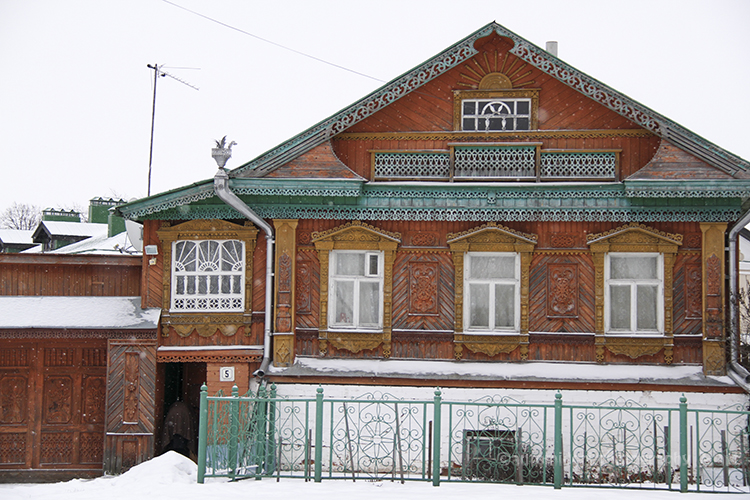 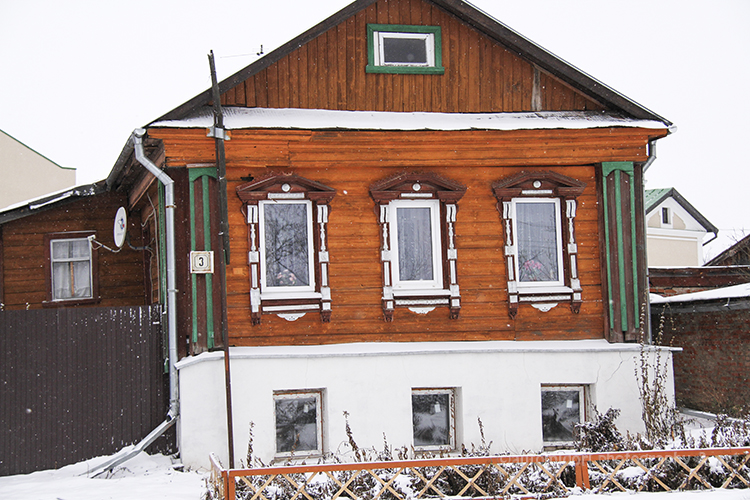 No little window sash, looking modern. I'm curious how the small garden behind the wooden fence would look like in summer 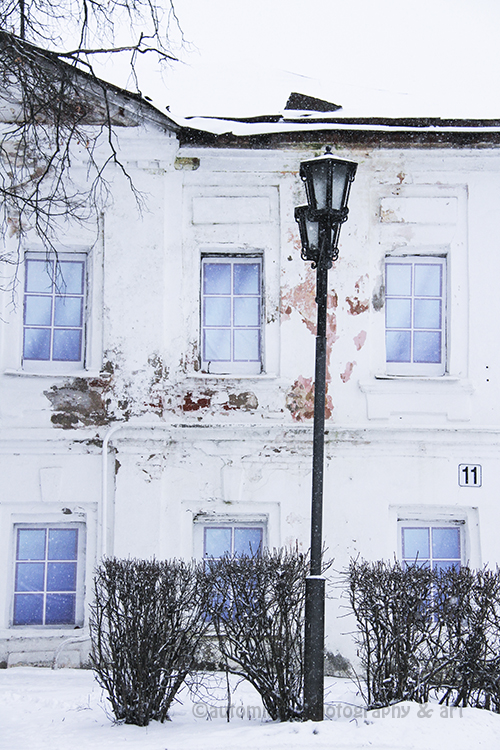 Like the buildings on Nikolaskaya Street in Moscow, this building is (partly?) covered by an image. 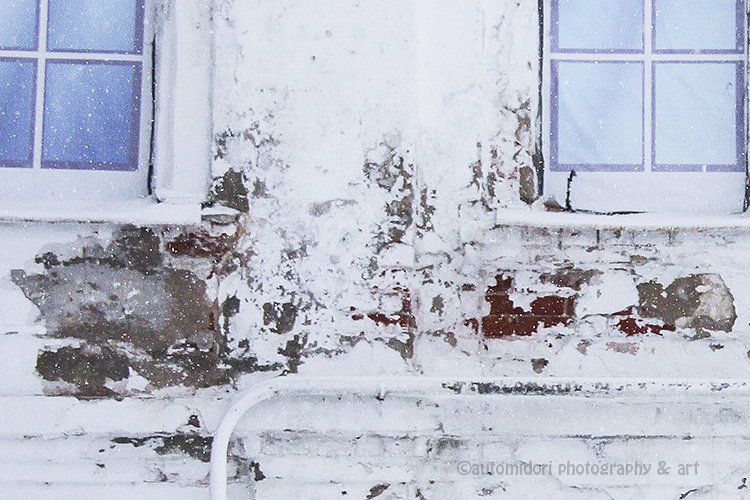 However, I'm not so sure from where to where does the image covers. Including the scratches or not? Maybe it is just over the windows? 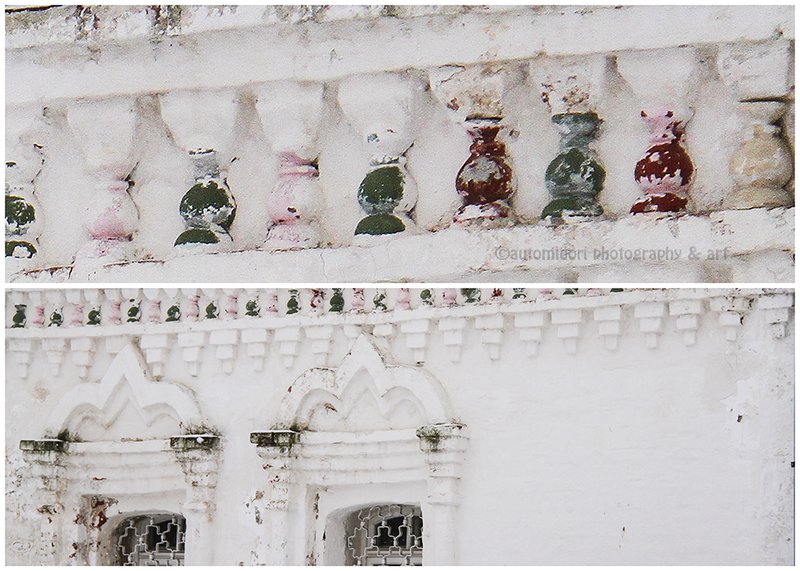 The photo above is a close up of the one below. I wonder why this building had been painted all in white whereas the ornaments on top were in green and red. Green and red on top of white would have brought a strong touch, wouldn't it? 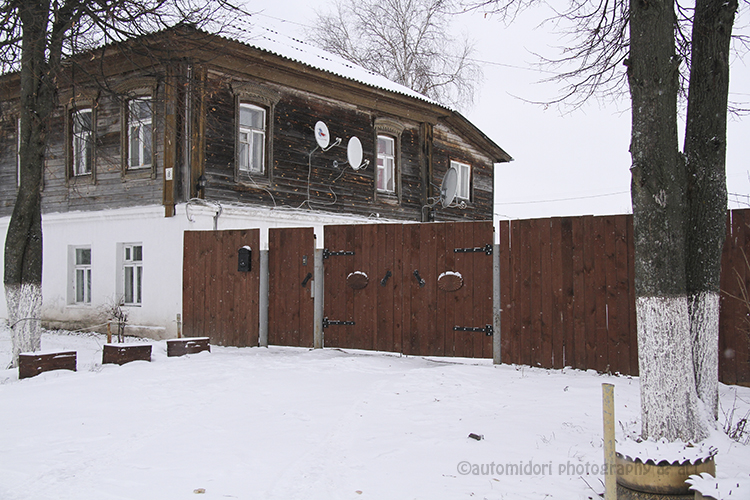 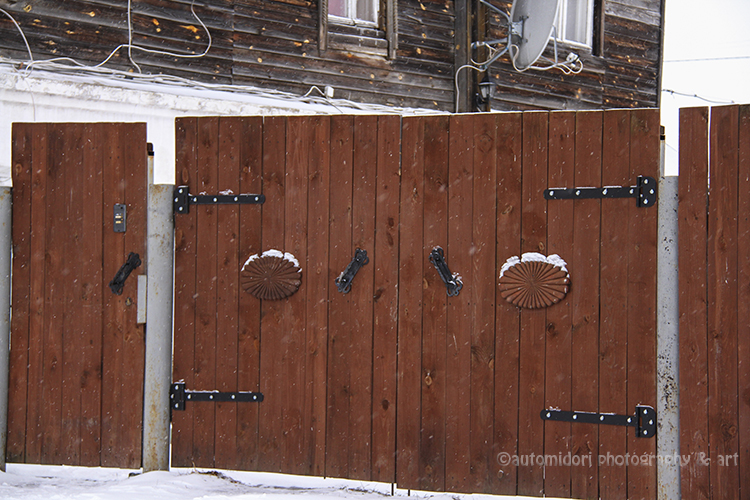 I love this gate! It reminds me of my story book when I was a kid, but I don't remember what title. Fairytale-like, indeed is Suzdal. 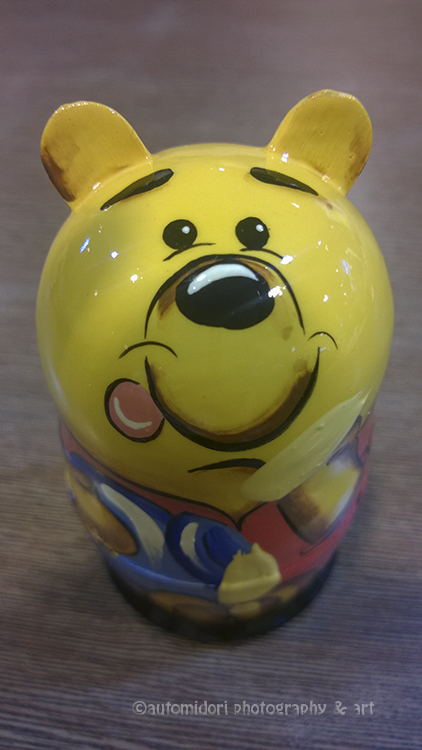 But Wikitravel says: locals feel that certain aspects of the town are on the cusp of being "Disney-fied" Well... for me, there's nothing more Disney than this Matryoshka doll. Yes, it's a Matryoshka. 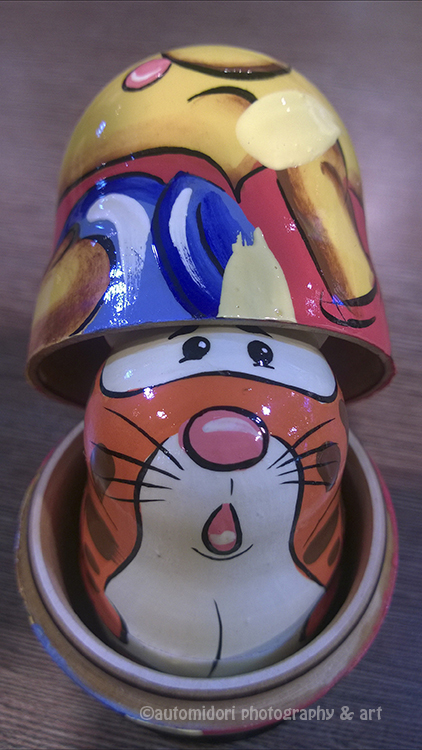 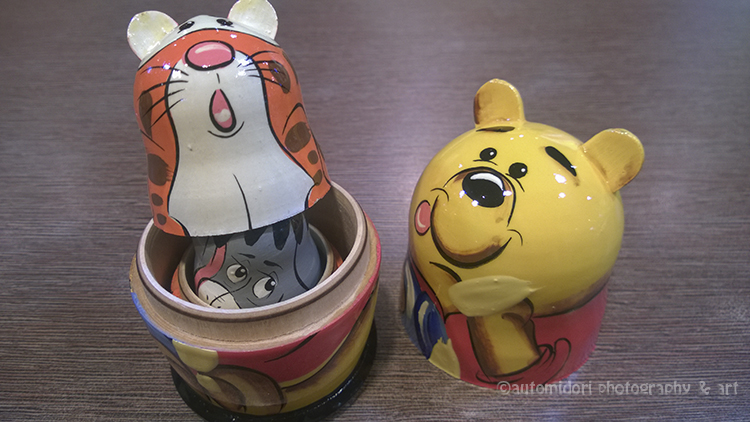 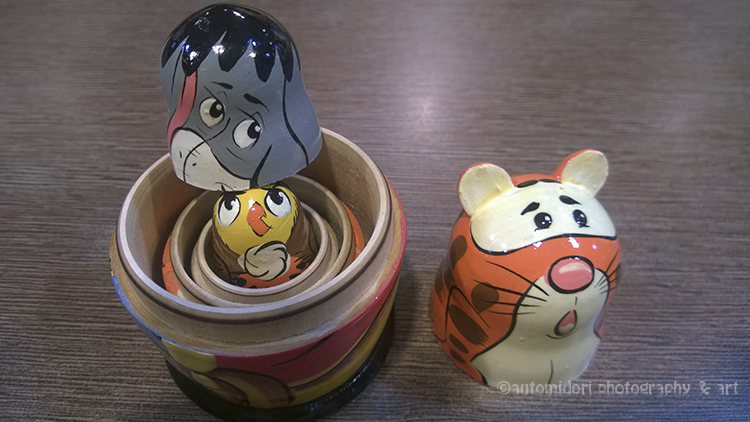 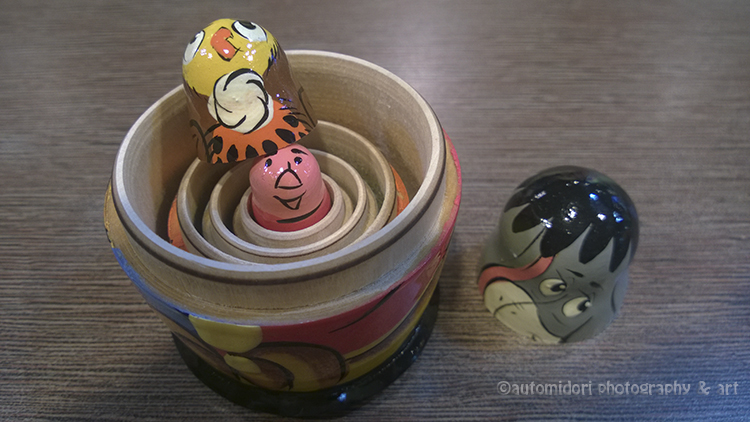 I had always thought that Matryoshkas are all of lady figures. 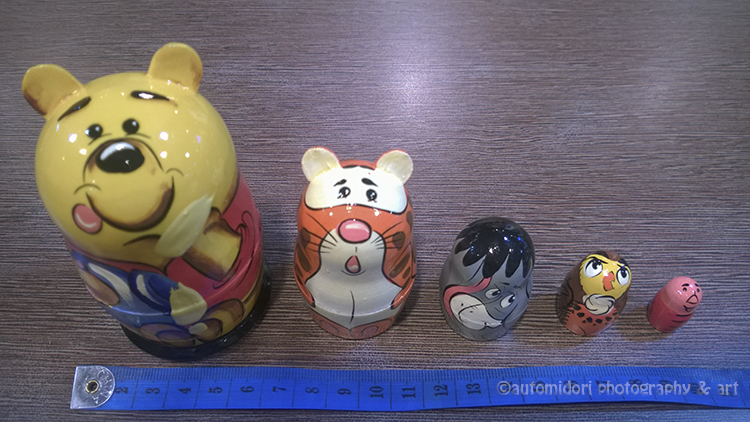 Here's to give you a picture of the size. The measure is in centimeters.

If I hadn't have still a long journey, I would have spent much in this souvenir shop. And if I hadn't hesitated in front of this shop, I would have never seen Pooh and his friends in Matryoshka. I hesitated -- in fact, twice -- because I was confused whether or not it was opened. The sign in front of the building seemed like "museum". And then when I was just about to walk away, a lady opened the door and called out,

"Muzey?" I pointed at the signboard.

The museum, which turned out not to be of my interest, was on the right side of the door entrance. The shop was to the left. And that was... tempting. Nevertheless, above all the tinkle twinkle in the shop, what I most wanted was a mini samovar which had a tap on the side, the one like Mishka's in Masha and the Bear.

Sonja, thank you! Your blog have finally motivated me to travel my own country.
I took my sister with me and now we are almost at the end of Golden Ring tour. I am writing from Uglich, we were at Susdal on Monday and Tuesday.
Thank you, I probably would have put it off again and again without reading your impressions and seeing your photos.

Katya, great to hear that! I consider it a reward and honor whenever I know what I did had inspired someone. Wow, Golden Ring! Originally I had put more of the Golden Ring on my itinerary. But then I found some other interesting places in Moscow whilst it was totally impossible to add even just one more day to my trip.

You have such a fascinating country. While I make a journey one third of the globe just to get there, you should explore, savor, all...because you are just there.