When I Came to Vladimir

I should have shown this map earlier. This is the route I'm taking for now. In my previous posts, you know I have completed the Trans Siberian - Trans Mongolian route from Novosibirsk until Beijing. So now I'm going to complete the part from Moscow until Novosibirsk. Then I'd be able to say, I've completed Trans Mongolian from Moscow up to Beijing, which makes three countries. Please keep in mind that when I say "Trans Siberian" or "Trans Mongolian", I mean "by train". 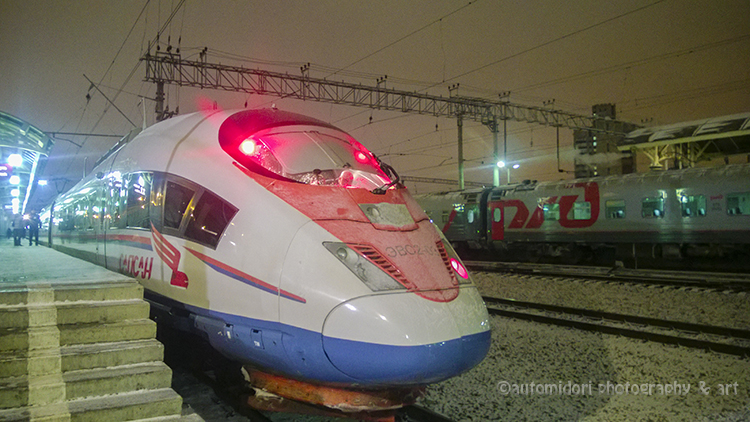 Here's Russia's bullet train, Russia's shinkansen called "Sapsan". Inside, was really like the Japanese shinkansen. Having been on the other "more ordinary" trains of Russia, riding on Sapsan somewhat felt like being in another country. Men wore suits, the latest gadget occupied their folding table in front, and some spoke good English. The on board announcement was also in English. 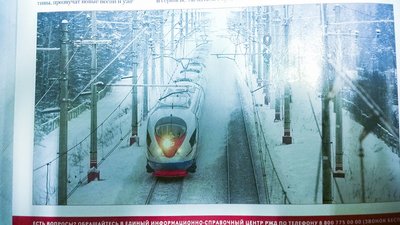 If you had flown above me, my train might have looked like this photo I captured from RZD's magazine. I myself had nothing else to view except my own face reflected on the window glass, because I took the first Sapsan from Moscow, very early in the morning. Plus, the sun wakes up late in summer.

Arriving in Vladimir, my world changed. The station platform, the road in front of the station, were occupied with piles of frozen snow. Actually my hotel was within a walking distance to the train station. But after walking down the road two three hundred meters, I gave up. It was too much a challenge for me dragging my load on icy road. Taxi.

Vladimir Hotel was another change in my world. The staffs spoke good enough English that I didn't need to strain myself and neither was an electronic translator in need. Who says a hostel is always more convenient in terms of communication and information?

After leaving my suitcase at the front desk, refreshing in the restroom, stretching my legs on the lobby's sofa while enjoying free WiFi and a cup of hot coffee from a coffee vending machine, I set off to the bus terminal following the direction given by the front desk staff. Suzdal, I'm coming.

How I felt Disney in the singing old Suzdal, you already know. If Moscow hadn't confirmed well enough that it was winter, in Suzdal it was strongly confirmed.

From Vladimir to Suzdal I got (by chance?) a direct bus. Then when I wanted to return to Vladimir, I couldn't find a bus station with ticket box offices like in Vladimir. Maybe just look for a bus with Владимир written on the window, I thought. One bus after another passed by, but no Владимир. How come? The bus from Vladimir to Suzdal is every 30 minutes. Shouldn't it be the same vice versa? Ah, maybe Vladimir isn't the last stop. Therefore it's not Vladimir that's written on the window. So when another bus came, I stepped in and asked the driver, "Vladimir?"

He answered, "Vokzal" and a few other words which of course I didn't understand. Anyway, I'm not going to the train station. I thought "vokzal" only means "train station". So I got off the bus. This same thing repeated once more.

Then another bus came. Now Владимир on the window. Yuuuhuu! Happily I got on the bus and turned to the driver "Vladimir?" just to make sure.

One again the answer was "vokzal". Phew. Desperate, I turned back ready to get off the bus.

"Houskvousk rousk vousk," and the driver pointed inside the bus. To whatever that meant, my instinct translated that as, "Why are you getting off? You are going to Vladimir, aren't you? Just have a seat!"

I found a seat and the driver looked relieved. Hence, my instinct's translation was correct.

Then I understood that "vokzal" can also be "bus station". So I had to go to the bus station which was rather apart from Suzdal center, buy a ticket to Vladimir there, and get on another bus. Actually my bus stopped at this station on the way to Suzdal. But that time (by chance?) I didn't have to change bus. The bus drivers must have all the time been telling me this, but I just didn't understand. And the bus driver of the bus which I finally got on was apparently the same bus driver I had asked before.

After taking a short nap, I went out exploring the vicinity. Most of the shops were closed already. But the park was vibrant with a cartoon show (something like Snow White) on a giant screen and various children's game. Wet snow fell heavier and heavier.

I wanted to cross the street to check out the seemingly mini market across. There was a cross road sign but no traffic light. I became hesitant. What if the driver doesn't see me? I must walk fast, but what if I slip in the middle of this icy road? However, the hesitancy lasted for only a second. A tall man said something and signaled me with his hand to follow. So walking next to him, I crossed safely and sound. "Spasibo," I thanked him across the street. He gave a pat on my shoulder and went off.

Through the night I heard big drops of snow tapping on my window glass. In the morning, the view outside, down there, was twice thick than yesterday.

I had already planned to have breakfast at the pizza restaurant next to my hotel. Stupid thing, I didn't pay attention on the business hour written on the door. The restaurant doesn't open until 12:00 PM. Oh no. 12:00 PM is for me lunch. Across the street was a cafe, but that cafe opens at 10:00 AM. Oh no. I'm starving already. 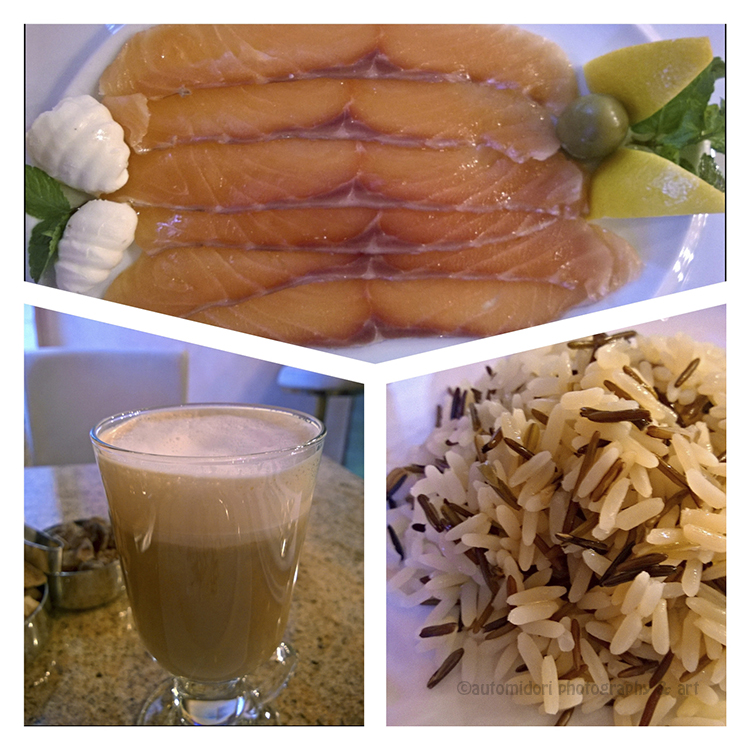 At last! I found a restaurant opened 24 hours. Salted salmon, black and white pilaf, Irish cream coffee... nothing could be better than this!! Ah yes, they had an English menu. 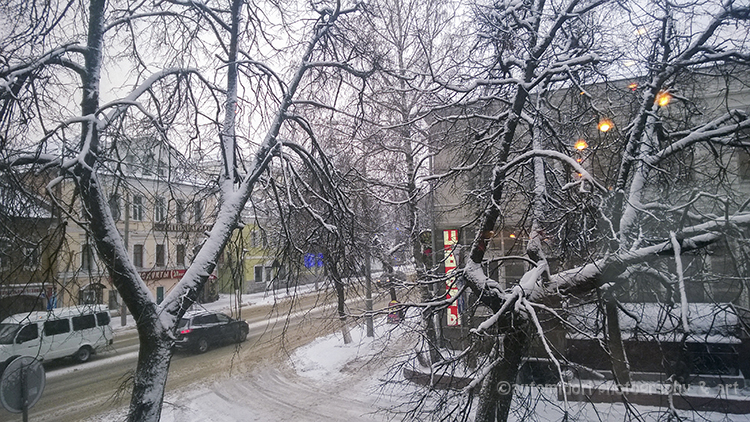 The view from the restaurant window that morning.

"It looks so quiet," Mom commented on my photo.

"Everyone was still asleep," I replied. 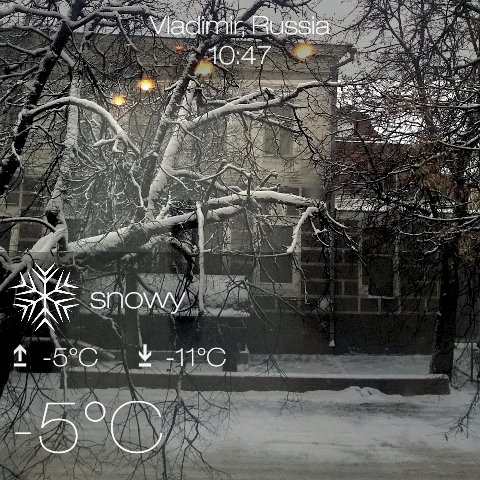 Temperature had dropped below zero and the falling snow had turned drier than yesterday. 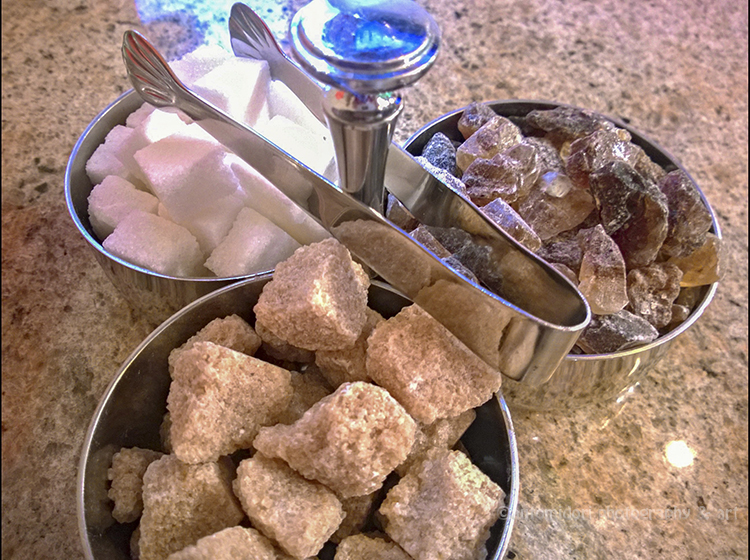 Interesting sugar, frequently served on the table in Russian restaurants. My tummy couldn't wait for my salmon to be served. So I took one cube of the brown sugar. Oh. It's really a nice thing to have when hungry, I tell you. 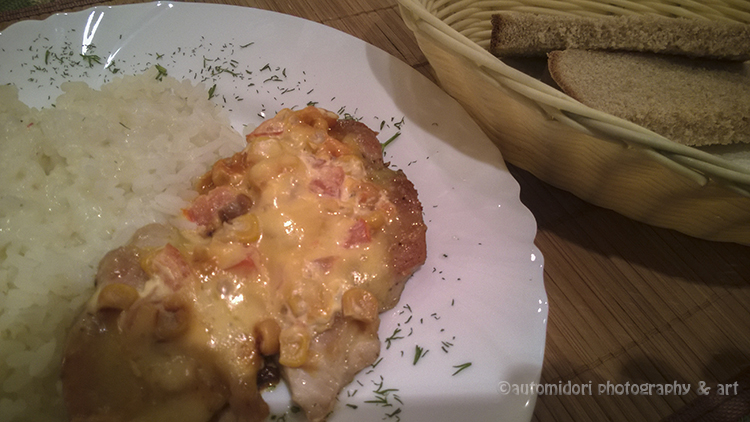 The restaurant I dined for lunch had no English menu and the waitress didn't speak English at all. So I wrote on my electronic translator: "I want chicken with rice or bread." The result was this. I got both rice and bread. I'm sure it wasn't because I was hungry (again), but it really was tasty. Yummy. Last but not least, it was only 109 RUB. I recounted the change I got and reread my bill. Still 109 RUB.

We are still in Vladimir. Stay tuned!