On December 24th 2014 morning in Vladimir, I woke up to a perfect weather for running. Not said me, but said InstaWeather. 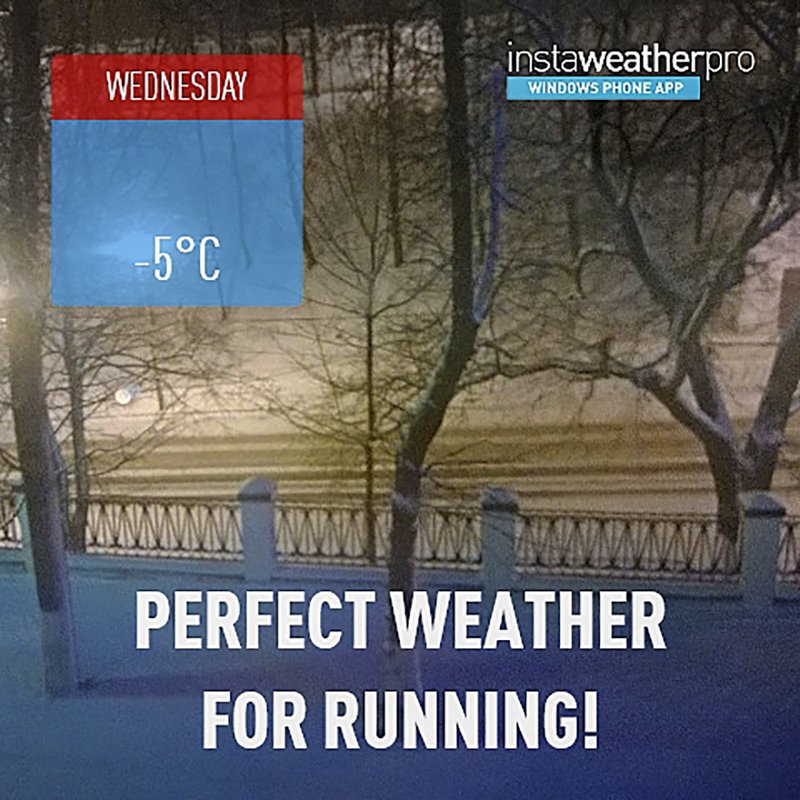 Here's the view from my hotel window. Actually shoving the curtain was one of the things I did as soon as I got out of bed. All night I had heard snow (ice??) drops tapping on my window. So I was curious about the result. And, yeah... wow! I gasped. The snow-blanket had doubled within a night. I grabbed my Lumia as to commemorate my finally-Russian-winter-dream-come-true. Tap. Bwahahaha!! What?!? Perfect weather for running?!? Bwahahaha!!

It turned out that had been a prophecy. But, did I tell you that Vladimir Hotel surprised me with a registration sheet during my check out? I had abandoned the thought of getting registered when in Moscow -- the capital city! -- my hostel staffs reacted awkward toward my inquiry of registration not to mention the hundreds of ruble they acquired. So when the taxi driver I ordered through the front desk pretended not to know where the train station was, charged me an extra one hundred ruble from what the front desk staff said, and returned to me less change than what I should get, I was happy still. Getting registered is more important.

At the train station a friendly lady officer kindly informed me where the platform was but in Russian. I interpreted for myself: "Go left and then go upstairs."

Upstairs, was, a waiting hall. But, nothing seemed like an entrance to a platform. There was a closed door, though. You know, this is not my first neither second nor third time boarding a Russian train. However I reasoned with myself: "It's maybe like in China over here. Only a few minutes to departure can one come to the platform."

"But!" the other me argued. "This is far away from China."

"You never know how far culture can travel."

"Is train boarding a matter of culture?"

This waiting hall on the second floor was one third filled. Across me sat a senior lady. She tore out several pages from a magazine and spread them on her seat and then sat on them. Judging by her clothing, it's not that because she thought the seat was dirty and didn't want to spoil her coat. Uhmm. It kind of broke my heart. I couldn't tell whether these metal seats felt icy under my thighs or not because my thighs were wrapped by layers of leggings and trousers. It broke my heart even more when she took out a plastic bag of snacks and offered me some. Every time I looked at her, she smiled -- a wide smile. She never said a word.

When she offered me (with her gestures) her snacks for the second time, I started to busy myself with my cellphone. It just felt so wrong to take from her what she herself needed. I already had enough calories inside and out to make a tropical girl warm in a Russian winter. Oh! There's WiFi here!

As I replied to friends' comments on my photo from InstaWeather this morning, I became concerned about my surroundings and time. Why doesn't anyone seem to get ready? Why is there no officer standing by the door? Even in Russian, there were no signs that would suggest a train was either coming or leaving.

I approached a young man who had also been waiting in this hall and asked him if he knew where my platform ought to be. It took him some time to read my ticket. "Oh no, don't tell me my train has left," I murmured to myself. Waiting for him finish reading was like watching a thriller movie. Next, he went to ask his friend. His friend started reading my ticket. Another thrill. With my ticket in his hand, they both walked to the balcony, looked downstairs, read my ticket again, and.. ahhh... shrugged his shoulders.

Trusting Russia to be safe as had always been to me, I left my suitcase upstairs and went down searching downstairs. No signs. I asked one man in uniform while showing my ticket, but he shrug his shoulders immediately. Ah. I was doubtful when I saw another man in the same uniform. So I approached the lady officer who first told me to go upstairs. Once again she gestured going upstairs with her fingers.

"But there was no platform upstairs," said I while hoping somehow her instinct would interpret for her.

No, her instinct didn't. But that man I had been skeptical about spoke, "Let me see your ticket." -- in English.

"It's upstairs," he said again.

And... voila. It turned out there were two staircases on the direction where the lady officer had pointed. I simply had taken the wrong one.

"Thank you! Thank you!" and I ran to the other staircase.

"I'm getting my suitcase upstairs!"

The fingers of a clock couldn't be more terrifying for me than that moment. One minute left? Still or no more? Ah. Go!! Go!!

On the second floor was another check-in point. I attempted breaking in but "Bilet!"

In times of extreme panic, just grabbing for a ticket that had been actually kept handy could on the contrary turn into hassle. "Please, I am very late!"

She looked at my ticket and handed it back the next half second as if it were poisonous.

Maybe... I was half rolling down the stairs, with my suitcase. "Perm! Perm!" I waved my arm towards the lady standing next to the train. There was nobody else. Of course!

I dropped my suitcase on the ground and "plunk!" the handle hit the ice-covered platform. It took her only seconds to take a look at my ticket. She quickly picked up my suitcase as if it were a toddler and signaled me to get on board, and then the train moved.

I leaned on the door struggling to catch my breath. When your heart is beating double speed on a moving train, it takes double the effort, I tell you. Then the lady asked me for my passport. That was no doubt an exception. Normally, no passenger is allowed to board without showing his identity document. Between the air I was still struggling to catch, I felt impressed and touched altogether. First, when I looked at my watch, I knew, the train had purposely waited for me. Second, what if I actually had been pretending being late and then had a false identity? She had just led me on the train.

After finish checking my passport, she pointed on my ticket and said something which I just shook my head. "Net." I guess she had been asking, "Do you know where your bunk is?" And her next response was, "Wait, I'll show you the way later." I nodded. It seemed that she had to stay posted there by the door for some minutes. So there we stood facing each other. She looked at me with a sorry face.

"Houskvousk rousk vousk," she said. I interpreted for myself into, "You must be very tired, aren't you?" I nodded. Da.

After about five minutes, she signaled me to follow. We went from one carriage to another, pushing the iron doors, stepping over ice and snow. 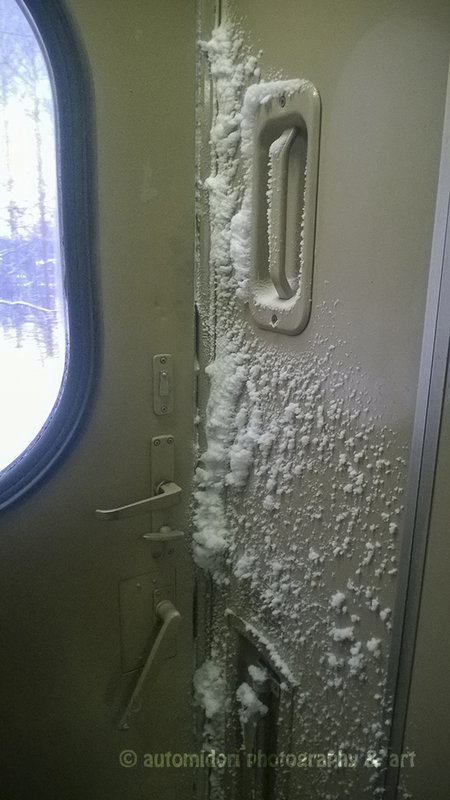 Here's a snapshot of one of those iron doors.

That kind lady took the time to notify the attendant whose room was next to my cabin about me.

As I got the whole cabin to myself until the next stop, I sat there with my own thoughts. I really, really, cannot understand how people could come with such negative ideas about Russians. How?? Isn't this just the complete opposite?? 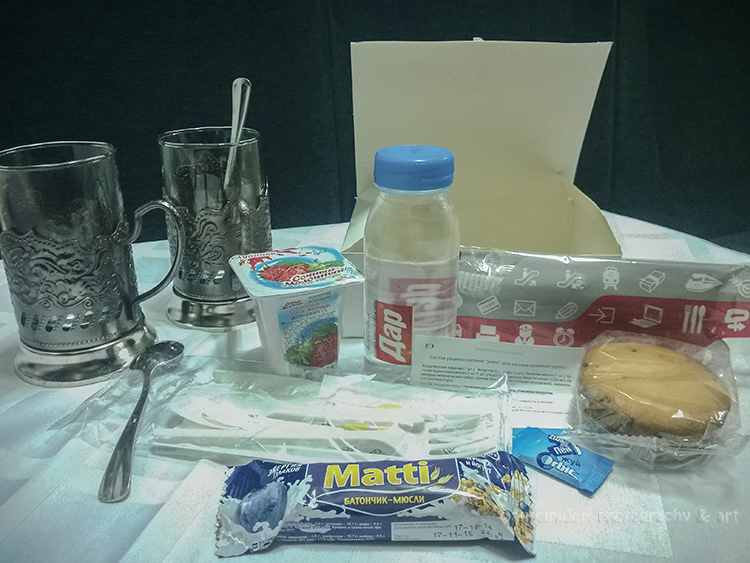 Relief and happiness wasn't just about eventually boarding the train to Perm. 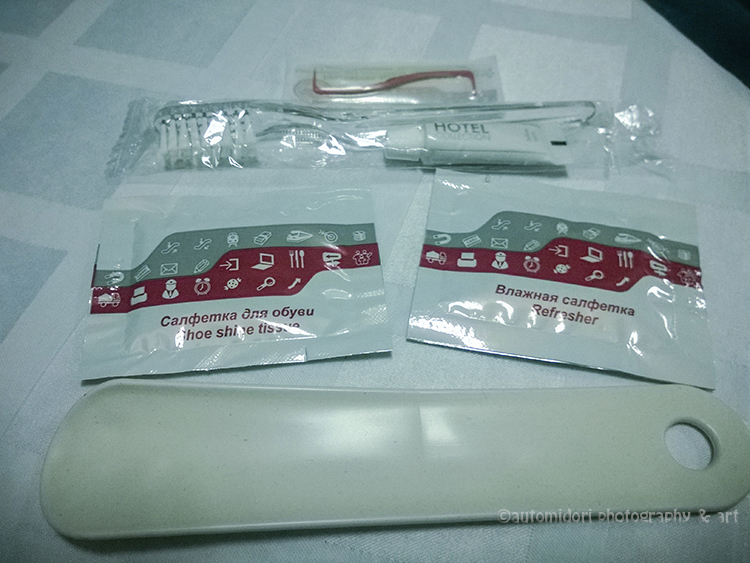 Inside that little plastic bag were these things.

Another lady attendant came. She asked me about dinner, I assumed. Net. I'm not ordering for a meal. But her instinct must have told her that I didn't actually understand what she had to say. She repeated. I said 'net' again. She insisted. So I handed her my Nokia with the translator application on it. She typed on it while smiling and then handed it back. The translation said: "Your ticket is included with a meal." Oh.

"Okay," I said to her feeling embarrass.

Still patient and smiling, in broken English she asked me what I would like to have. I couldn't understand her. So I handed her my electronic translator again. This time the translator failed to completely translate her sentence. However, there was chicken bla bla bla.

"Ah chicken." still with that sweet smile. I really was impressed that she cared to take that much effort to make me understand.. 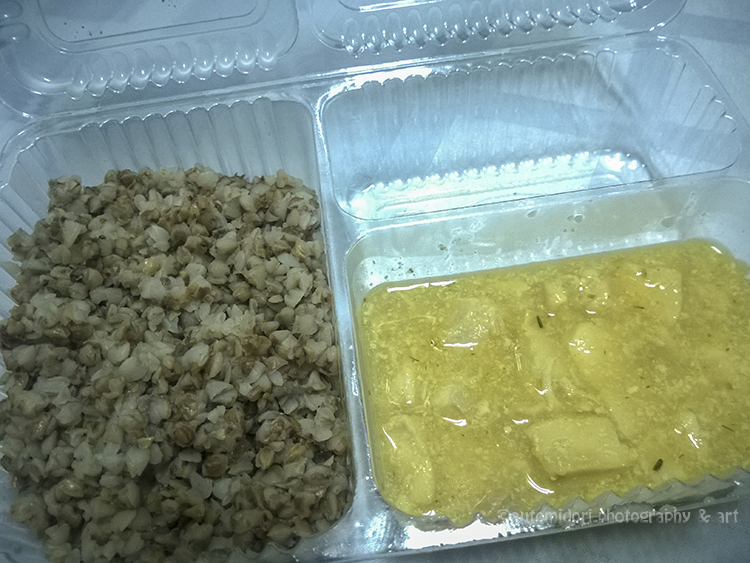 [Now I remember, at the time I purchased this train ticket, there was a promotion which offered free meal. ] 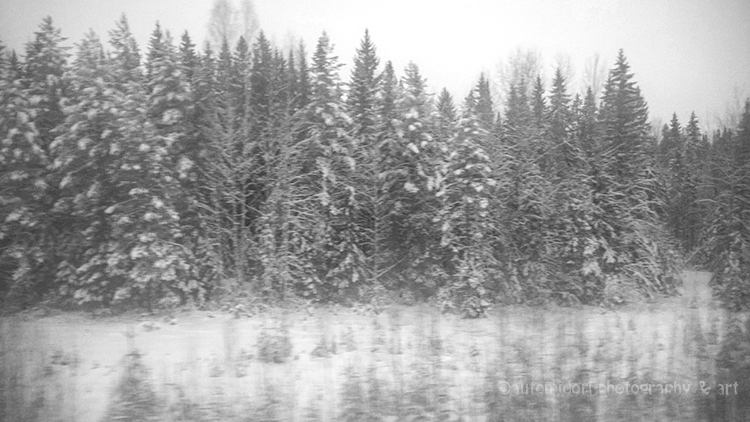 See you all in Perm!