Red and Green in Perm

When touring the city.

Touring the city of Perm on one's own ought to be very convenient... if, there weren't snow. Just follow either the Red Line or the Green Line, or both! Yes, you are right. No English version. But, what would you lack for when Uncle Google is there for you? Simply copy paste the link into Google Translate, right? 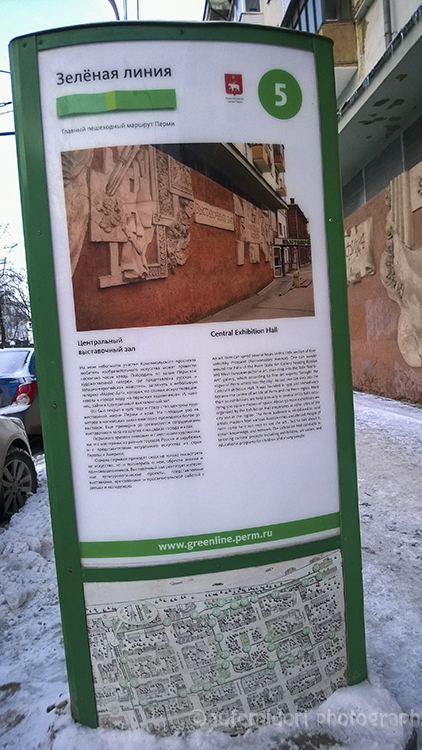 Once you are on site, written English explanation is provided. Such as this.

Let me read for you:
An art lover can spend several hours at this little section of Komsomolsky Prospekt (Komsomolsky Avenue). One can wander around the hall of the Perm State Art Gallery housing Russian and West-European pictorial art then drop into the little "Marisvogue of Perm artists into the city'. At last one can step into the Central Exhibition Hall. It was founded in 1976 and immediately became the center of art life of Per and the Perm region. More than 30 exhibitions are held annually in several of its halls occupying 500 square meters of space. About 50 more exhibitions are organized by the Exhibition Hall employees at other sites of the city and in the region. The Perm audience is introduced to local artists, masters from various Russian cities and abroad. People of Perm come here not only to see the art, but to talk about it, obtain knowledge and network. The Exhibition Hall conducts interesting cultural projects including exhibitions, art-salons, and educational programs for children and you people.

Good English (better than mine) and pretty easy to understand, huh? 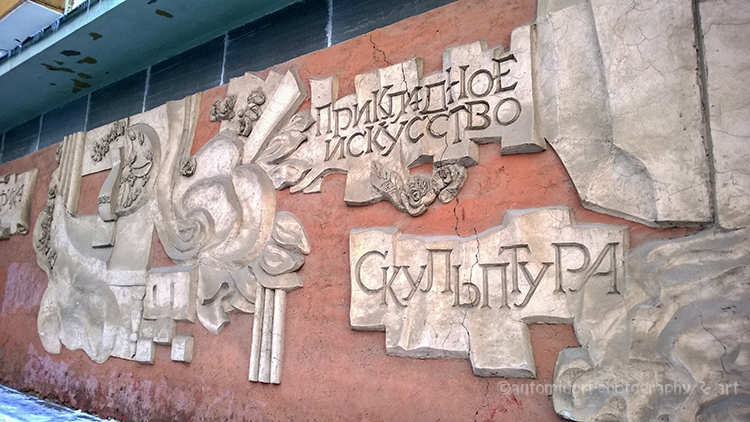 Here's close up of a small part of the relief on the wall. I didn't go inside, but I bet it's not this battered. 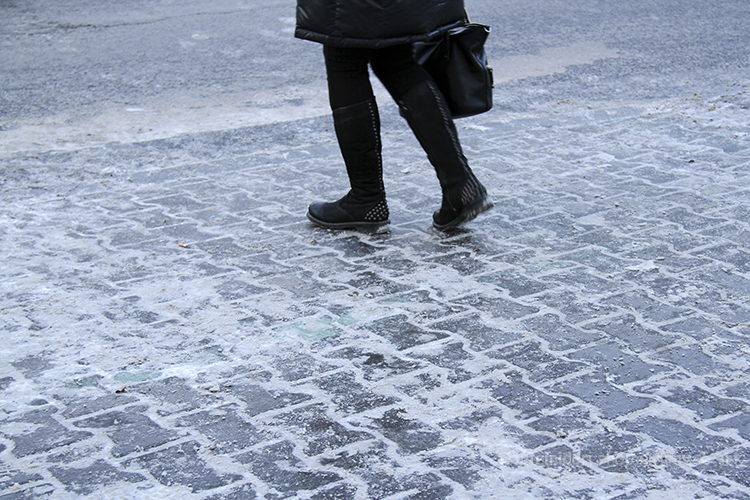 So why did I say 'if there weren't snow'? You see now? Where's that Green Line? 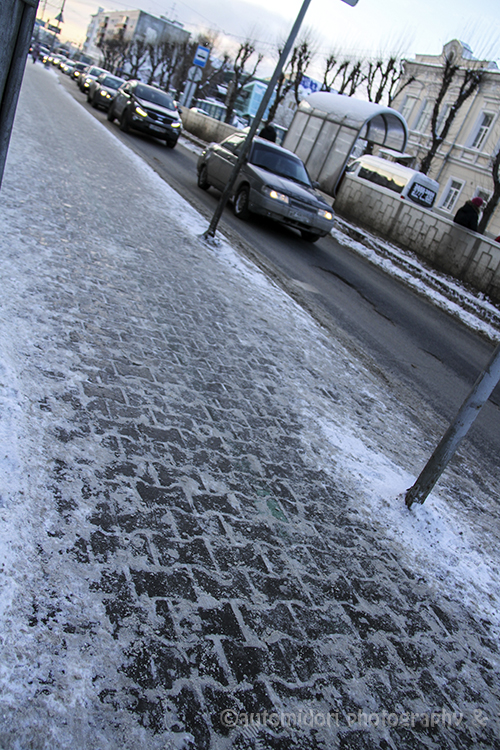 In winter, the smooth pedestrian road becomes slippery, and the green line disappears -- under snow below zero. 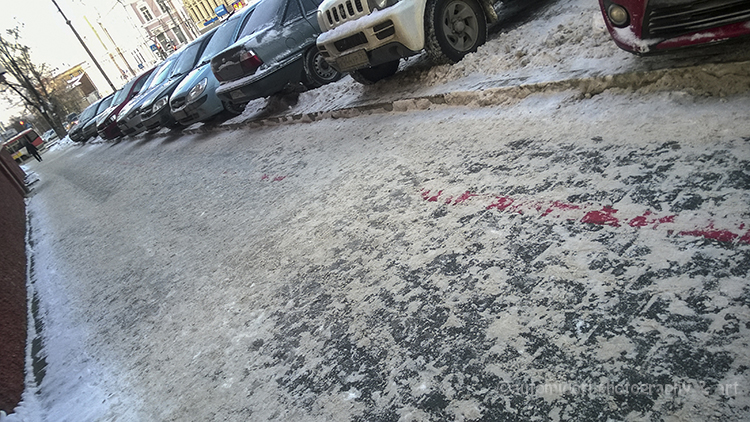 The Red Line is more conspicuous, provided the road has been cleared up from snow. And, snow doesn't fall again until next cleaning session. 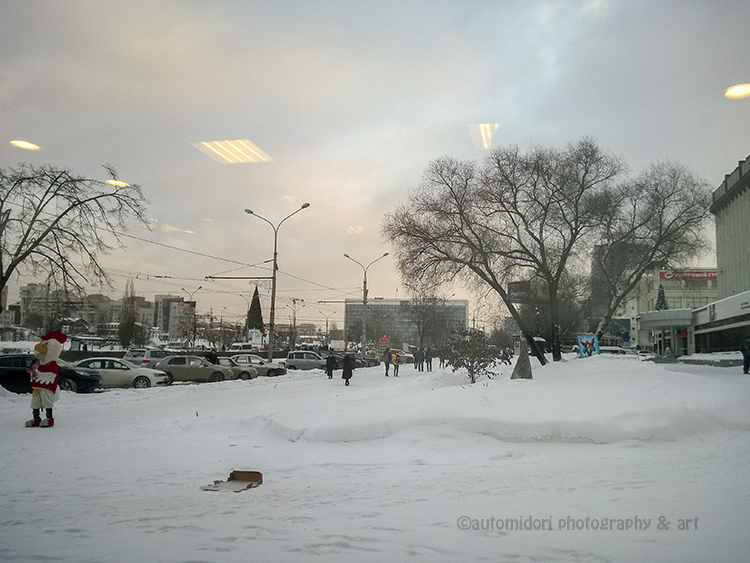 Otherwise! Let alone searching for the line. You'd rather seek for shelter, like me, when I snapped this shot from behind the window of a very nice fast food restaurant: Southern Fried Chicken. Southern? Oh! I thought I was in the West.

Nevertheless, never ever let snow hold you back from touring Perm the city... 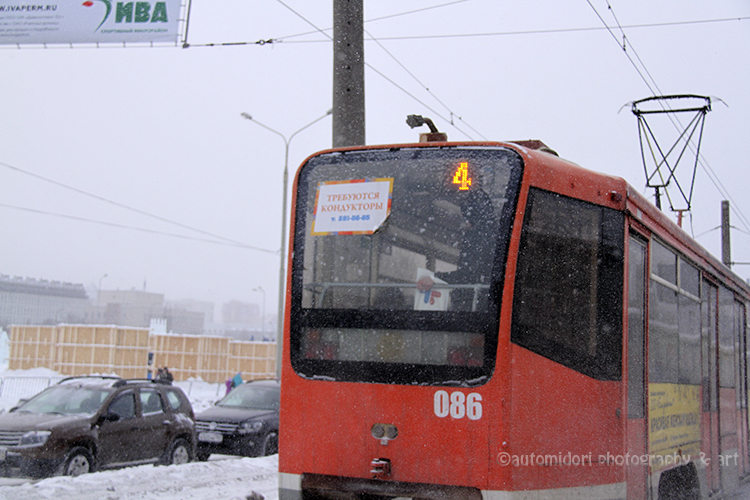 when trams and buses are just everywhere.