Now for the Tummy

A friend: "But... there's food in Russia, isn't there?" So here is it. It's not quite something to be called a feast. But it's for the tummy, anyway. 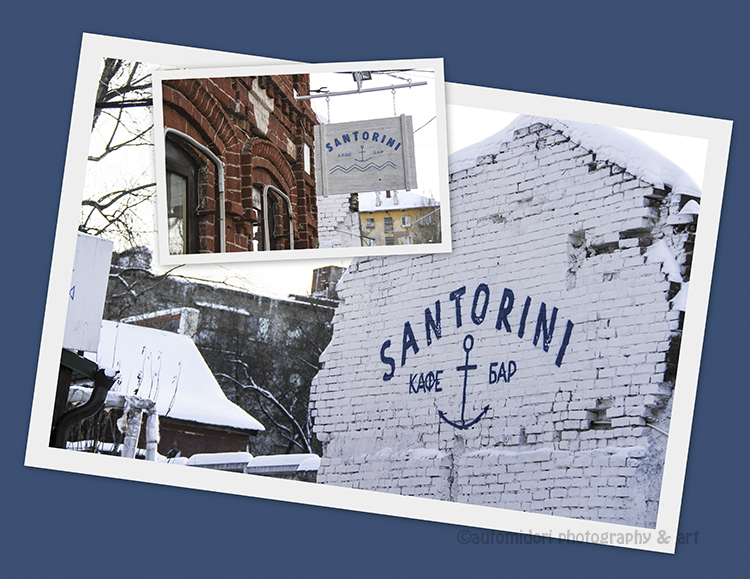 In A Feast for the Eyes, I've mentioned this bar, you remember? That was one thing about food. I didn't try, but you should. It's mentioned in TripAdvsior here and got quite good reviews. They also have their own website here. If by God's grace I get another chance to visit Perm, I'll make a stop here. At least, it's a lot easier for me to obtain a visa to Russia than to the real Santorini. Aye.

Despite being surrounded by people so serious about their food, let me bring something not serious but fun such as: 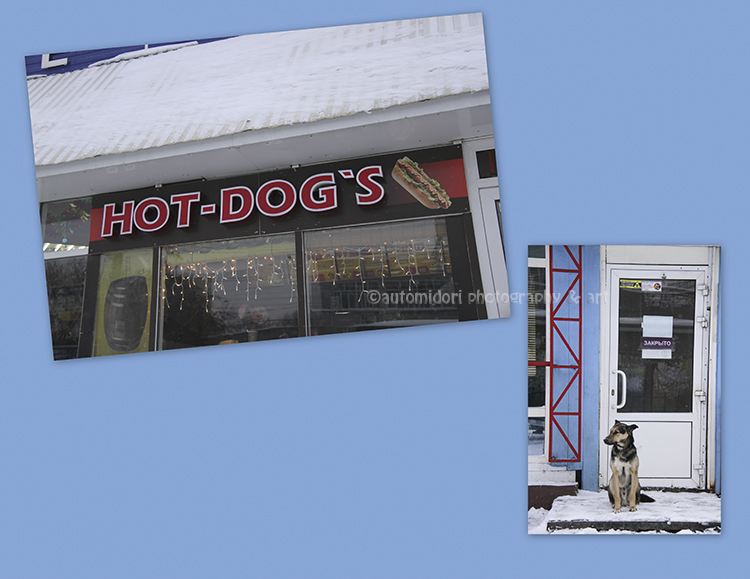 this hot dog's. The bad thing of solo traveling is you cannot laugh. You laugh solo and people think you are drunk with beer from Santorini. Ahahahaha! Ahahahaha! Hot dog apostrophe 's'! Ahahahaha! Shoot! Shoot! Ahahahaha! And then I looked down to check my camera's preview. What?!? A dog sitting by the door? Is that the hot dog?? Ahahahaha! Ahahahaha! My mind flew to my North Sumatran friends. 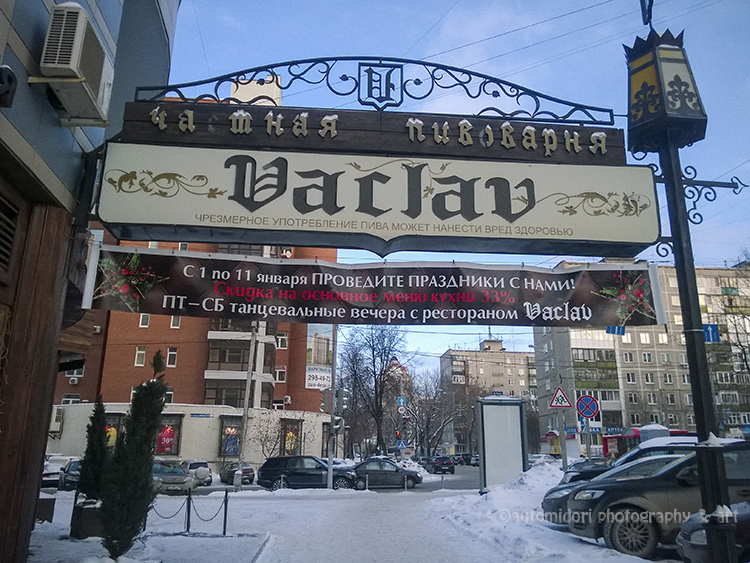 Sssh!! I dare not to pronounce this. It sounds like "f**k love". It was crowded inside and I was excited to find an empty table by the window with Japanese cushions. Sitting on the floor crossed legs after being nearly frozen outside is surely one of the best comfort in winter. I went through the Russian-only menu and understood that they served a broad variety of sushi. Okay, that's enough to explain. 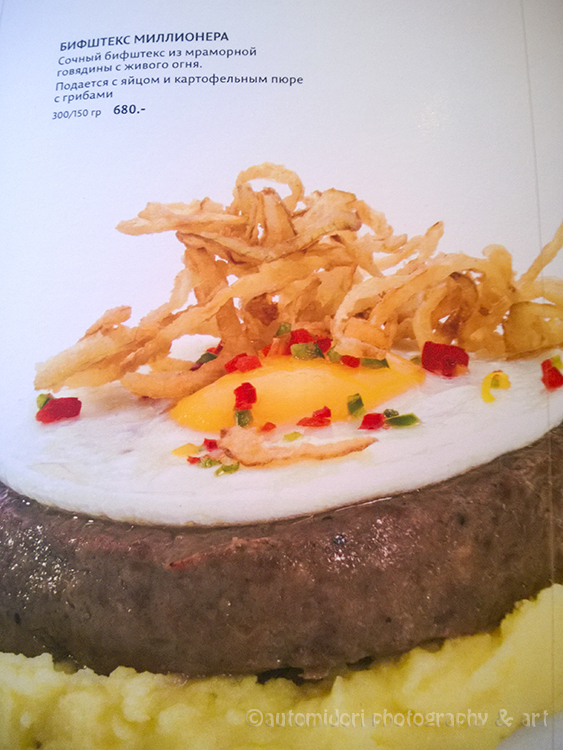 I opted for this merely because of the picture. It seemed to my liking. 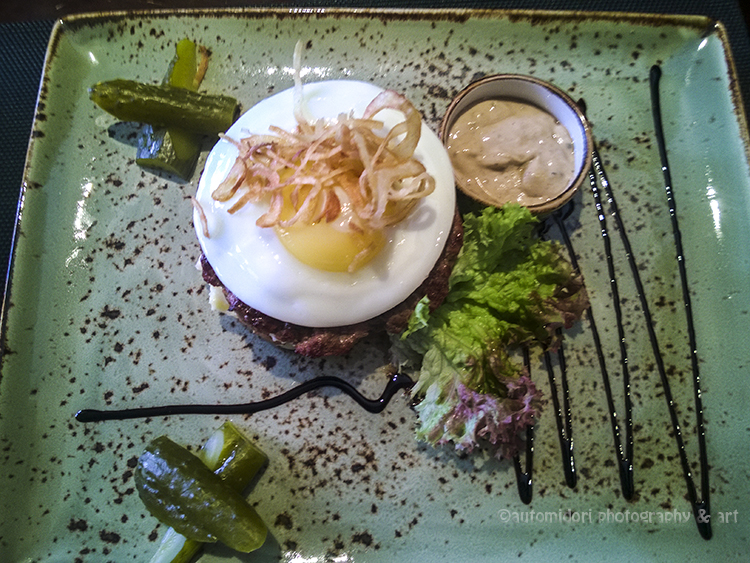 Indeed, it did. Actually, the reality tasted much better than what seemed on the menu. Even the photo... uhm. Vaclav -- don't read! -- should have hired me. Aha.

However on the beverages menu there were no pictures at all. To the waitress who welcomed me, I asked, "Do you have an English menu?" Her face turned panicked. She disappeared into the inner room. A few seconds later she returned with another lady seemingly of a higher rank. "Yes, can I help you?" Then she answered, "Sorry, no English menu. Sorry."

Oh dear. Okay... is there anything I can read here? Ah... ледяной мокко минт. "минт" must be "mint". That sounds nice. I love mint. "мокко" might be either "mocha" or "Morocco". Ahahahaha! 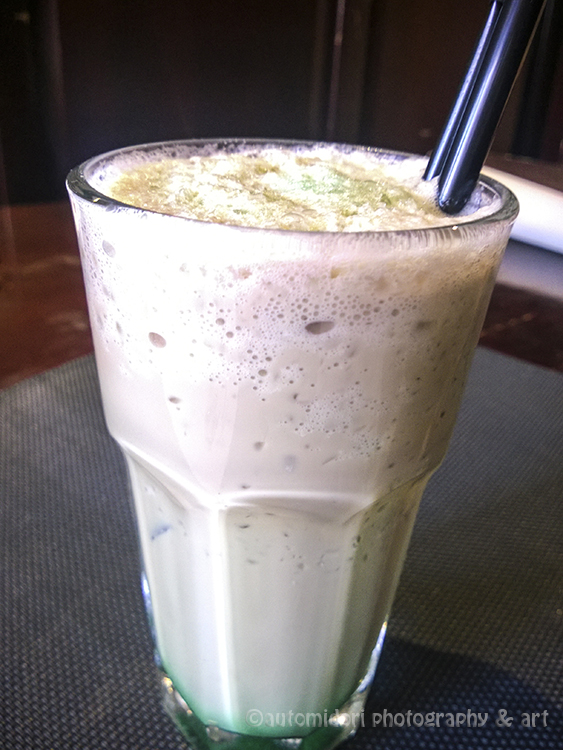 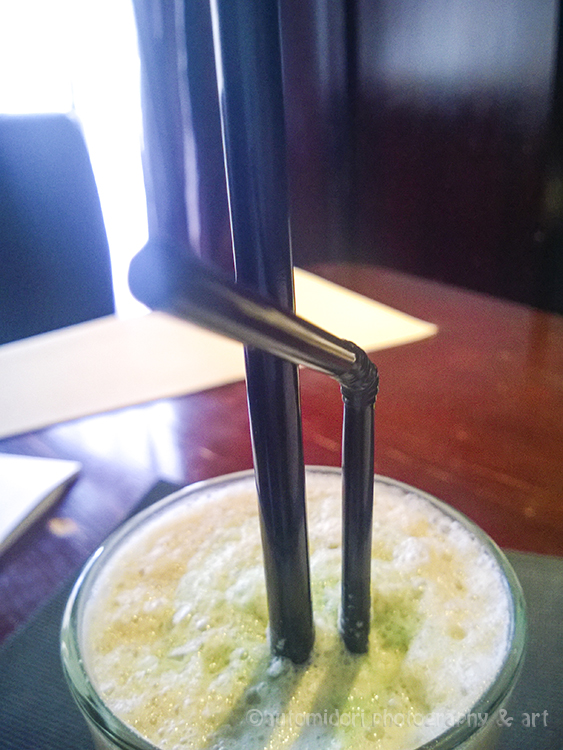 Whenever I dine abroad, as much as possible, I take a picture of the menu which has the name of the food or drink I ordered. Otherwise when I write a blog, I would say: "In the morning I had 'this' for breakfast and 'that' for lunch." I had what? But with a photo of the menu, I can either post the photo of the menu or rewrite the name through Google Translate's assistance. Example of the first is the beef menu above, and example of the later is the ледяной мокко минт. Those were after I suddenly remembered that I hadn't taken a picture of the menu whereas the waitress had taken the menu away.

"Excuse me," I called the waitress, the one who panicked when I spoke English and now started panicking again. Poor lady. I'm so sorry, Dear. I read минт and Ленин only. "May I have the menu again, please?"

She came back and handed me the menu. Then she stood still beside my table with a memo in her hand ready to take an order.

"I'm not going to order. I just want to take a photo of the menu."

"Yes, can I help you?" The lady superintendent (?) just now came again.

"Oh, it's okay!" she replied before I finished. She interpreted to the waitress and the waitress immediately picked up the menu from my table.

"No, I don't want to order. I just want to borrow this menu to take a photo of what I ordered just now." Ah, what a silly thing to explain.

"This menu is only to be used here."

"You said you want to borrow?"

"Yes, I want to borrow it here for taking a picture."

"But you cannot take it home."

"So you are not going to take it home?"

The waitress' face had turned from frantic to confused. She must have been wondering what the hell is going on between these two ladies. It took like a minute or so for the lady superintendent to explain to her. Before they both left me with the menu, the waitress glanced at me like I was an alien. 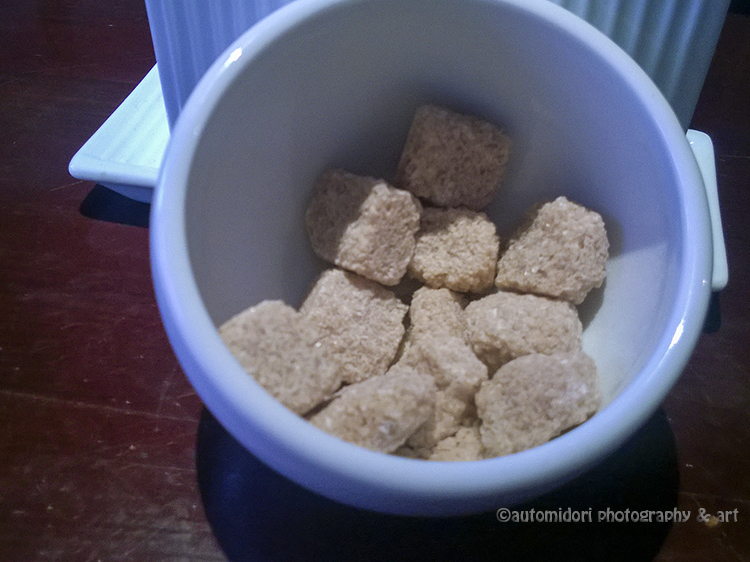 While waiting for my order to come, I munched two cubes of this brown sugar. Surprisingly, it's kind of soothing after a weary walk in frozen air. 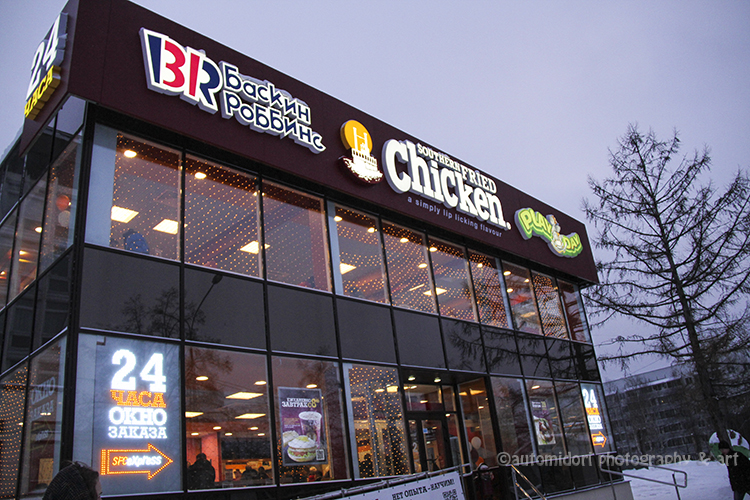 Now, you can read this aloud. Baskin Robbins!! Southern Fried Chicken!! Play Day!! To me, this is my place of refuge in Perm. On the first day in Perm I had dinner here. On the second day, I intended to try another place. Not because it wasn't good, but I simply wanted to experience as much as possible, even it's just food. However, the wind was blowing like crazy. When the wind was blowing against my way, I had to push myself forward twice harder due to the slippery road. That's a review on physics from junior high school. Less friction, less power. And then when the wind was blowing at the same direction, I literally nearly flipped off the ground. Seriously. It was nothing but pure agony. Hence, forget about new experience. Southern Fried Chicken was the closest public shelter I could reach at that time. 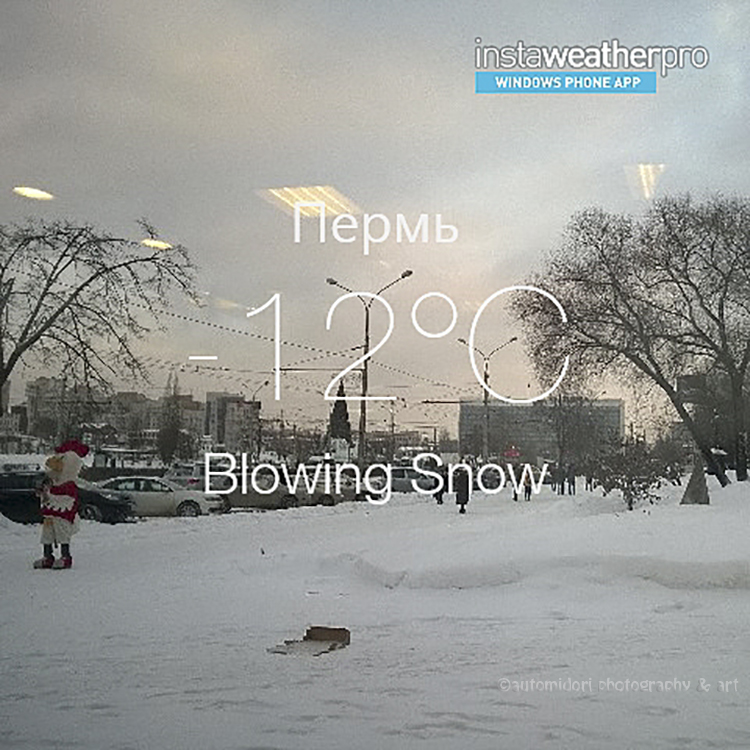 See? InstaWeather confirmed: Blowing Snow. That minus twelve is nothing as I have experienced minus 25, minus 27, already, and yet I didn't spell it agony. That's why when people say, it was very cold, it was minus bla bla bla, my respond is always: "How was the wind?" This photo I took from behind the window inside Southern Fried Chicken. My looks must have been like real refugee. Anyway, do you see that red hen on the left? 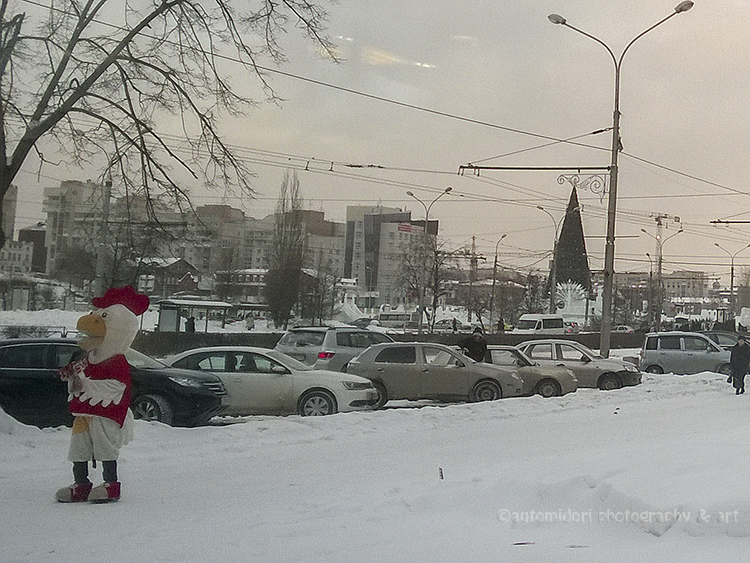 Here, let me give you bit more close up. The red hen was handing out balloons to children and pamphlets to passerbys. Actually I planned to take a photo of him outside after lunch, but he already disappeared before I finished my meal. Really, I think, that's the best job to have in winter of blowing snow like now. You get yourself warm and heavy. 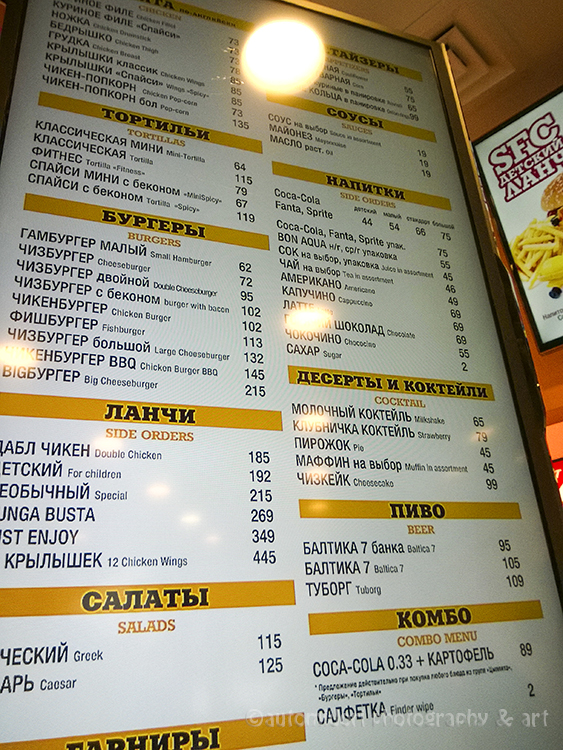 This restaurant has English translation of each item on the menu, on the wall and next to the cashier. Plus, some of the cashiers speak English. They were kind, helpful, understanding... making me so reluctant to leave Perm on the third day, and falling deeper in love with Russia. Seriously.

Dining while facing a wide window glass towards the street, with excellent free WiFi connection in hand and a cup of hot coffee, is one of the moments I call a good time. That, I had all in Southern Fried Chicken, Perm.

There is nothing bad with pronunciation of 'Vaclav'. See
https://en.m.wikipedia.org/wiki/Václav

@Aleksandr P
Of course it IS not anything bad. Who would want to put a bad name for a brand? Hahaha.
You just didn't get it.

P.S.
It looks like you are doing good screening on my posts :D

Good screening? I just enjoying reading and dreaming of atrip to Siberia

But when I meet smth wrong in text I write a comment.

@Aleksandr, thank you for showing me what you thought, was wrong.