To the Intercontinental Border: Asia - Europe

When I was in Istanbul, I had difficulty figuring out whether I was on the Asian side or on the European side. 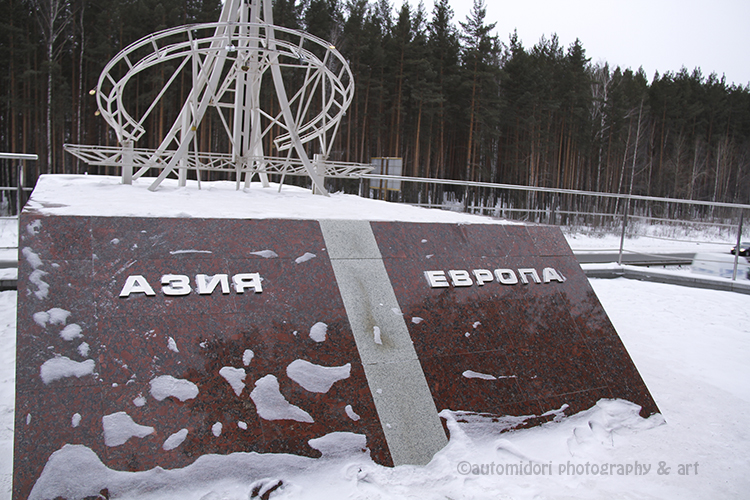 But here, I can tell for sure whether I am standing on Asia or on Europe, or on both. What I couldn't tell for sure was which thrilled me more: the fact that I was standing on the border of two continents, or the fact that it's Ural Mountains I was standing on and surrounded by. Before, the word "Ural" itself could thrill and give me a chill at the same time. Ural. Adventurous. Superb. Distant. Not mine. Nevertheless, I'm here.

Wikipedia says, The mountain range forms the natural boundary between Europe and Asia. Hence, the border monument is actually the Urals. 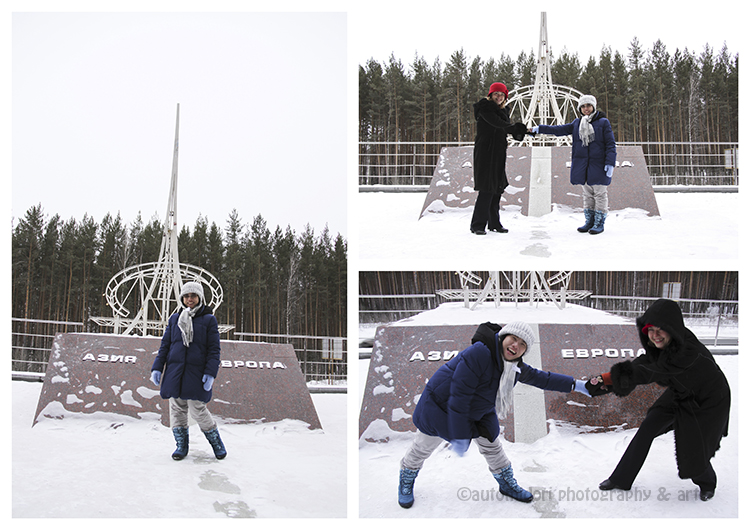 Later I found out that this is not the only Asia-Europe Border Monument with the names written in Cyrillic. How come? Then which one is true?? I asked myself. Did my tour guide bring me to the true border, or to the truly popular??

Thinking, thinking... Tring!! When you hear the word "border", what comes up in your mind? A line or a spot? A line, of course! So! How many spots can you make on one single line? Infinite. So? So, if I want, I can build my own Asia-Europe Border Monument somewhere else along the border line, and then mark it with... uhm, アジア・ヨーロッパ, maybe? Wouldn't that be supper cool? 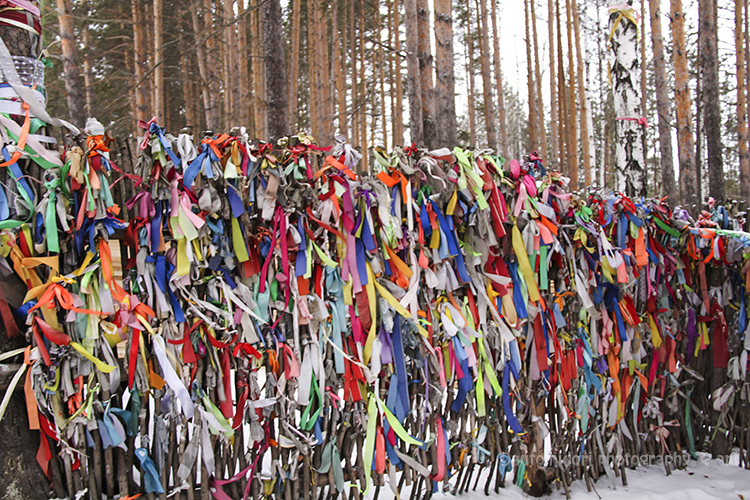 What was supper cool for locals, however, was tying a knot on the trees as newlyweds. 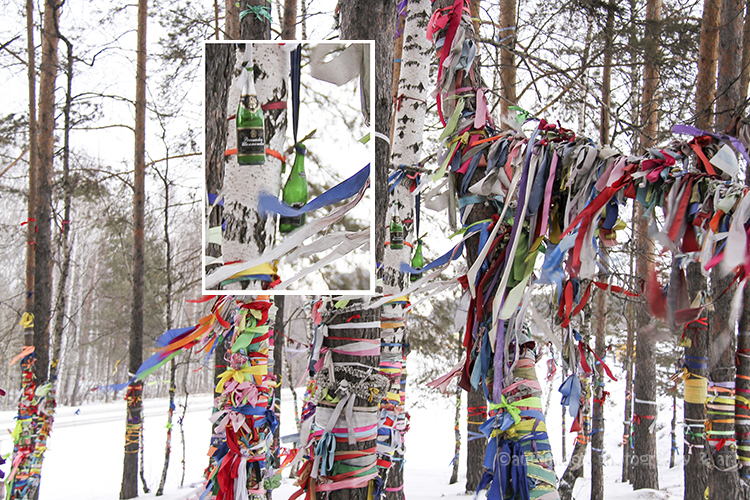 I like the description from this website which I bumped into during my non-sense research on Asia-Europe border. It says: Newlyweds visit the place on their wedding day to tie a knot on one of the trees (pagan tradition) and leave an empty champagne bottle with a message inside (definitely a new tradition!). 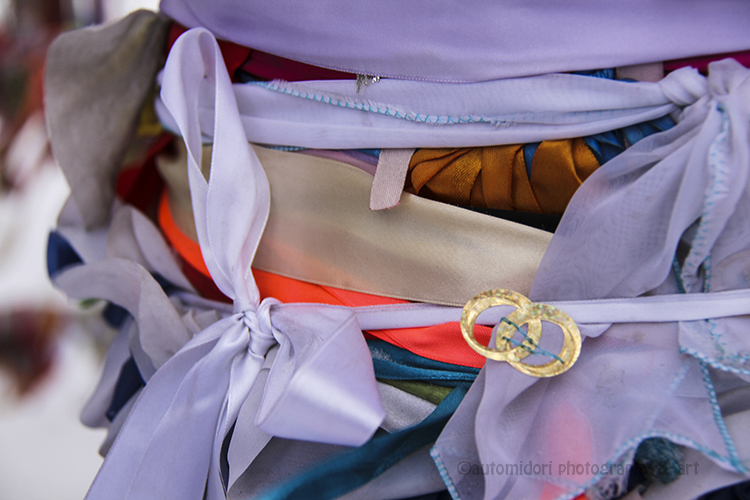 How about a set of rings? Errr... they look of the same size. Ops. 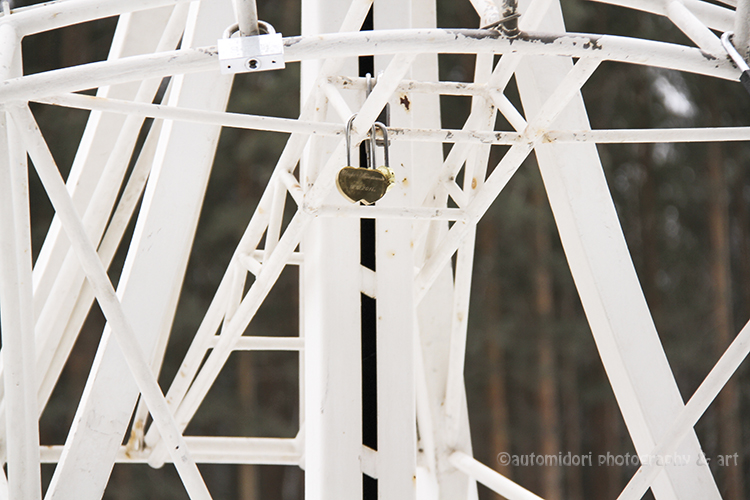 Oh, these must be the padlocks of Eurasian couples. For them, sealing love on the border monument makes more sense than tying a knot on a tree by the side of old Trans-Siberian road. Trans-Siberian? Hold on. 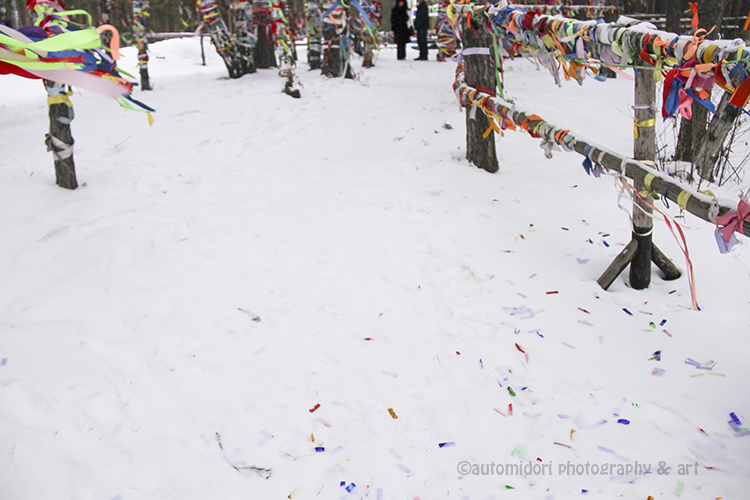 When I got off the car and saw these many many ribbons, a creepy feeling crossed over me, as I thought those were like prayer flags. Is this not just a border but more a sacred place?

"No, those are not prayer flags," my tour guide confirmed. She explained how newlyweds pay a visit to this place sometimes bringing their families along. "A wedding in Russia is a big festive," she said. "In this case we are more Asian than European. It's common to hold big banquets after a wedding ceremony."

"Sounds like my country," I replied. "For us, it's common thing to invite two hundred, three hundred, guests to a wedding party. Especially when the father is for instance a successful business owner. He will invite his... "

"That's contrary to most Europeans, right?"

"It is. That's why when people ask us, 'Do you feel Asian or European?' our answer will be 'Eurasian'".

Our conversation extended to how culture and tradition had blended people over the centuries. Take dumplings for an example. "Russians love dumplings", she said.

"That must be introduced by the Chinese along the Silk Road," judged me, like I had all the knowledge of the world.

"But the fact is, many Russians think dumplings are traditional Russian cuisine."

"What?! Dumplings, Russian!? Ahahaha!! In Indonesia we eat dumplings, too."

"Yeah we have lots and lots of dumplings, from hawkers to five star restaurants. The difference is that we know, that's actually Chinese origin."

I, an Indonesian born Chinese, really really couldn't think of anything more hilarious than dumplings being Russian. Ahahaha!! Maybe that's like batik being Indonesian.

Then, I had to laugh at myself. Wikipedia explained that pelmeni is Russian dumpling. Look to the right, it must be written originating from China, I told myself. I read: "Place of Origin: Russia" What?! Russia!?

Now, let me read for you:
Pelmeni belong to the family of dumplings, and are related to Ukrainian varenyky and Polish pierogi. In the United States and Canada, the term pierogi or perogies is often used to describe all kinds of Eastern European dumplings, regardless of the shape, size, or filling. Pelmeni are also similar to Mongolian buuz, Chinese jiaozi (Cantonese gaau) or Chinese húndùn (Cantonese wonton). They are cousins to the Turkish and Kazakh manti, the Nepalese and Tibetan momo, the Uzbek chuchvara, the Korean mandu, and the Japanese gyoza.

Borders, after all, don't exist in culture. And, do you see how would I not be addicted to traveling? 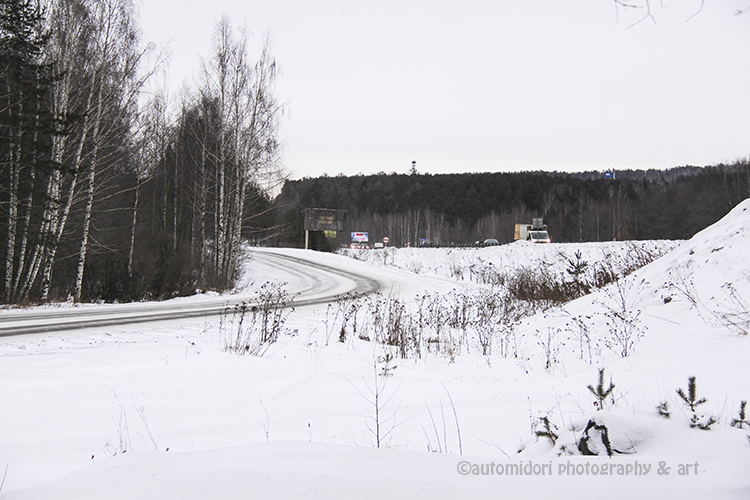 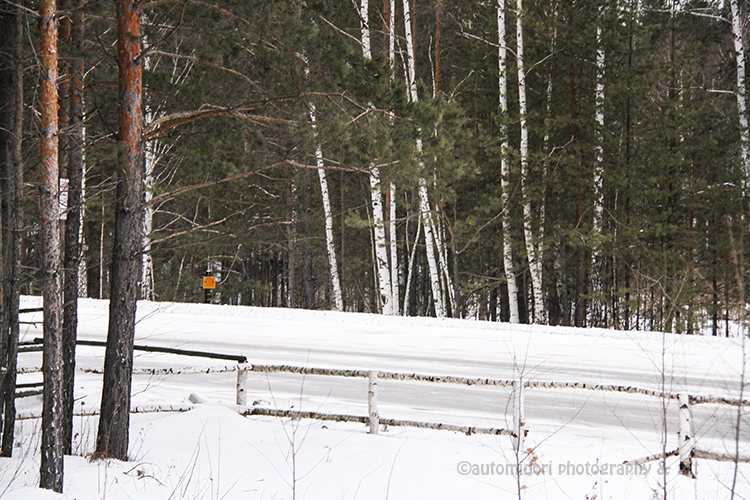 A little close up to the old road on the other side. My guide said that people still travel this road today, although less frequent. Yes, I can see that the middle of the road is clear from snow. That proofs. 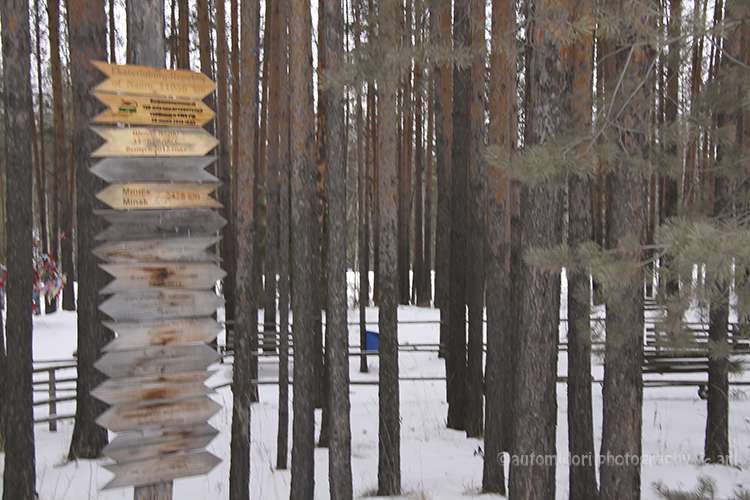 Obviously, not merely a border this place is. It's a connecting point to many places, West and East. Yekaterinburg central, Minsk, etc. 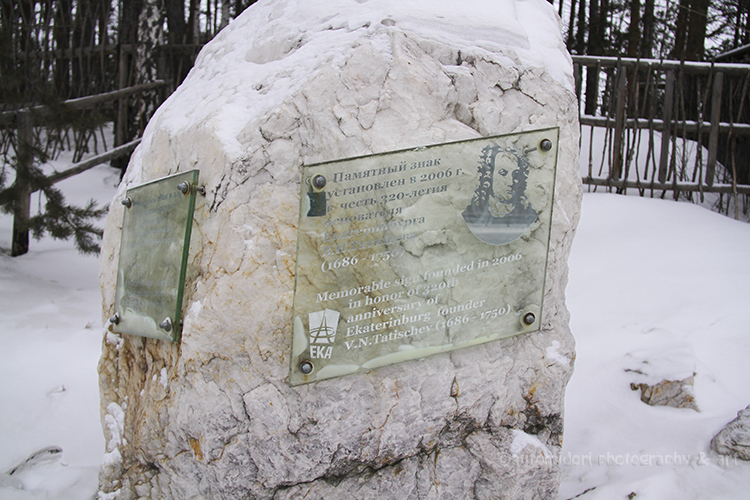 A small monument in honor of Vasily Tatishchev, the founder of Yekaterinburg. 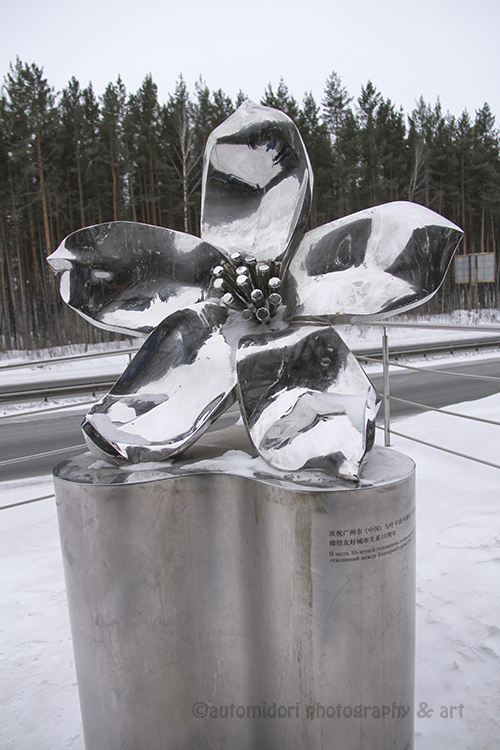 As dumplings have cousins, cities have sisters. Yekaterinburg's sister is Guangzhou. Yeah, they became sister cities in 2002. 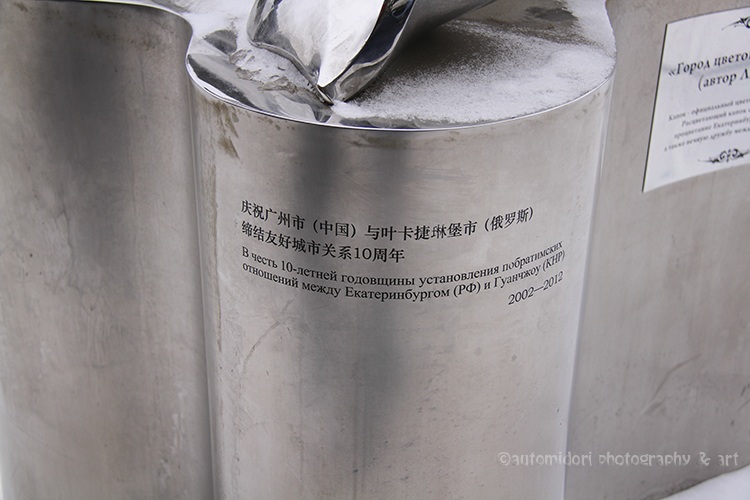 So was it written. Aha. 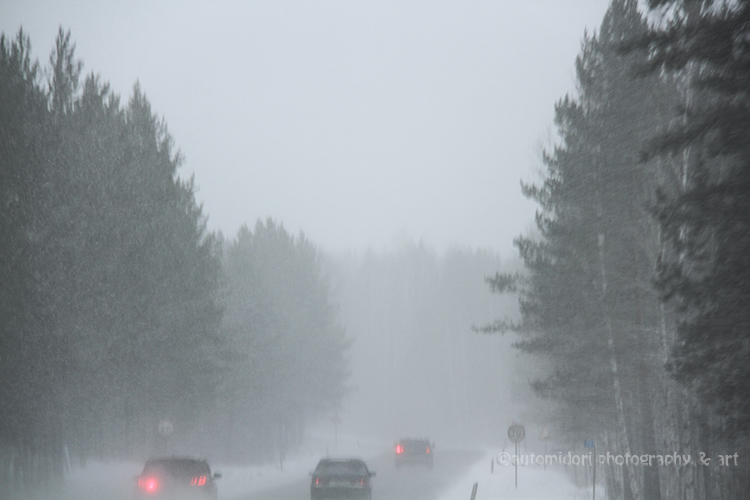