Experience is not always the best teacher.

At the bus stop in front of Birobidzhan Railway Station, I got on a bus to nowhere and got off at somewhere. There was no bus route written at the bus stop, so I couldn't apply the how-many-stops-counting technique I used to apply in China. But the bus numbers were clearly written. So... what should I worry about? Just remember the number of bus I got on, and on the way back, cross the street, take the opposite direction bus of the same number.

First, I examined how people got on the bus and paid their fare. Do they drop the money in a box next to the driver's seat, or is the box near the exit door in the middle? Hmmm, there's only one door opened for passengers. I waited for the next bus to pass by and took a closer look at the passengers' gestures as they got on the steps. Hmmm, they just get on, find a seat, or just stand inside. I waited for the next bus, but still couldn't figure out. Oh well, maybe it's like the bus I took from Zhalong to Qiqihar. When the forth bus came, I got on.

Exactly. I took a seat, sat back, pulled my hand gloves off, sighed, looked around... A minute later a lady with a waist pouch approached the passengers who had just got on. She must be collecting the fare, I assumed. I gave her a 50 ruble bill hoping the bus fare doesn't depend on which destination. How would I tell her where I want to go to? I don't speak a word of Russian and I don't have a destination. And if she says anything, it means the fare is more than 50 ruble. I will give her another 50 ruble bill. So did I prepare myself.

The bus conductor accepted my 50 ruble bill without a word. She poked into her waist pouch, counted, and then gave to me a handful of coins. Yay! I was happy. 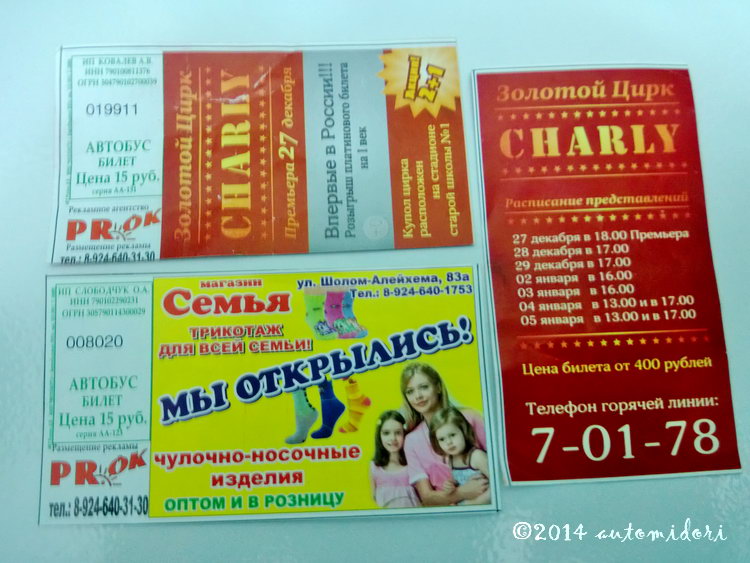 Next, I got a ticket. Here is a sample of my bus tickets in Birobidzhan. The ticket is attached to an ad and is printed double side. It looks like sometimes there is a special offer written on it such as some percent discount, buy 2 get 3, etc.

What impresses me about the bus conductors in Russia is that they don't rush to the new passengers for the fare. They always allow time for a passenger to settle down and prepare the money. Although they carry a bag full of coins, they never shake coins in their palm to tell passengers to pay their fare. How straight opposite it is to the bus conductors in my hometown. P.S. My term "in Russia" is still limited to Birobidzhan and Khabarovsk.

My face was fixed close to the window. So this is Birobidzhan. How different does it look from Vladivostok. I was excited. I was thrilled. We passed a frozen river. I suspect that was Bira River. Children and adult were ice skating near the bridge. What a happy time. People got off the bus, people got on the bus. The bus was crowded, empty, and then crowded again.

She must be asking where I'm getting off, I interpreted for myself. I nodded my head as if I understood her and pointed outside also. I meant to say, "I'm getting off at the next stop."

"Houskvousk rousk vousk." I heard her again. Some passengers seemed looking at me. I nodded my head repeatedly and pointed outside once more. I understand these people must be surprise to see a petite with slanting eyes on their bus, just like me when I see a bule in an angkot in my hometown.

When the bus stopped, I got off. Okay, now where am I? Ah, why should I care? I explored the area a bit and then crossed the street intending to wait for the same bus. Exploration done, back to the railway station. No problem, eh? But where's the bus stop? Uggghhh... I walked, and walked.

Andrey had told me that solo traveling in Russia was generally safe but I had to watch out for drunk people during the New Year season.

As I crossed the street, my eyes quickly searched for any store or restaurant which I could run into for safety. Seemingly none! I turned my head back, fearing the two drunken men followed me cross the street. No, they went straight.

From across the street I watched them. A boy about 10 years or maybe younger, was half walking backwards in front of them. I didn't see this boy before I crossed the street. The boy pulled one the man's hand, literally dragging him to walk straight. I could see the boy putting energy in doing so, for his body was less than half the man's. Maybe that's his dad, or his uncle. The scary moment transformed into a moving moment. As the boy pulled the man's hand, he cried out many things which I understood none but strongly surmised was begging the man to come home. The two men however, appeared indifferent. How many times already in his life has this boy done this, I wondered. Will he remember times like this when he becomes a man himself?

I continued walking and suddenly heard a train's whistle. Eh?? Am I close to the railway station already? Ya ya ya! That's a train! I saw it running by behind a wall across the street. I continued walking. And... that figure looks familiar... Eh?? Isn't that the Birobidzhan Railway Station where I had taken pictures? Yes it is!

From the train station, I took another bus but with a different number. 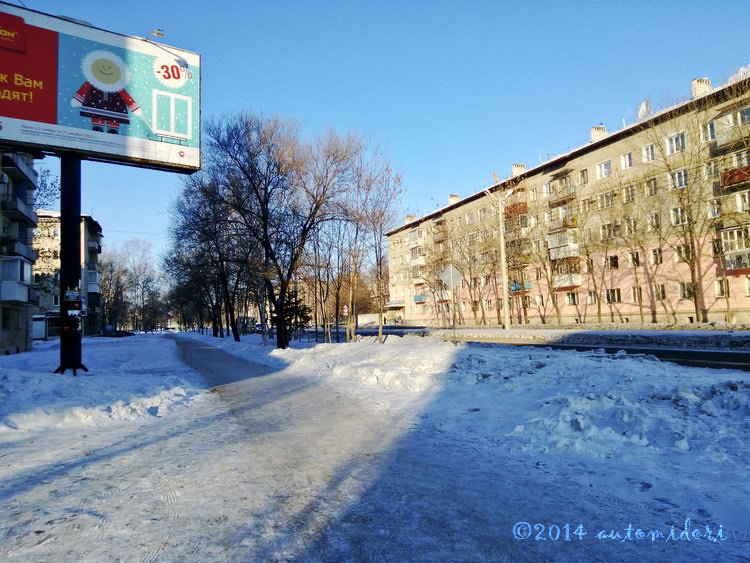 In this place called somewhere I took great pleasure on the white snow covered wide pedestrian road. Those are exactly the two things I love: white snow and pedestrian road. Now, this IS snow. In my mind I danced along the road. In Beijing, Harbin, Mudanjiang, Turpan, Urumqi, I had no such luxury, because the snow on pedestrian roads were always blackish, oily, and made the roads looked messy instead. When I had my first snow experience in Japan, I took it for granted that the snow looked white. That's life. We sometimes need to be reminded by not-so-good things to appreciate the good things. 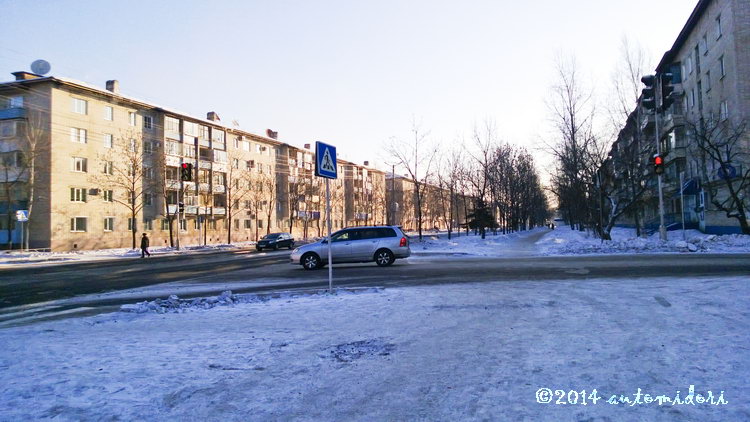 I got on another bus. I gave a 50 ruble bill and got a handful of coins back again. Yay!

However, as I rolled along further and further, my view reversed to less houses more trees. O ouw. What if this is like the bus to Zhalong that runs only three times a day? What if the bus back to town won't meet my train to Khabarovsk? Oh no! Although I still had several hours before my train departure, when someone got off, I tagged along immediately. The further I go, the longer distance and time I would need to return. Actually I had intended to follow the bus to nowhere until the last stop. 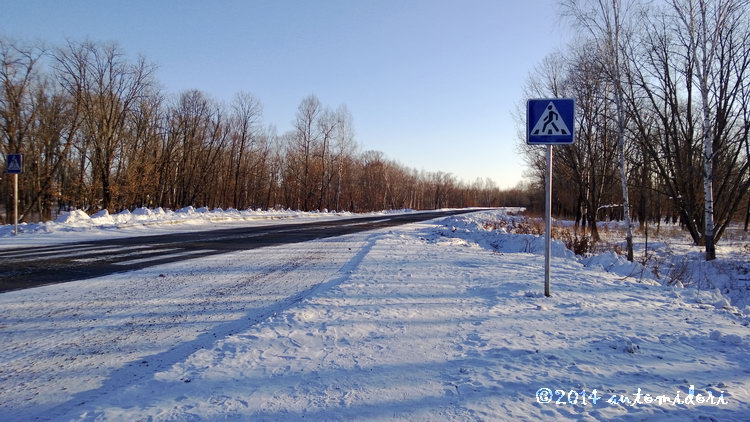 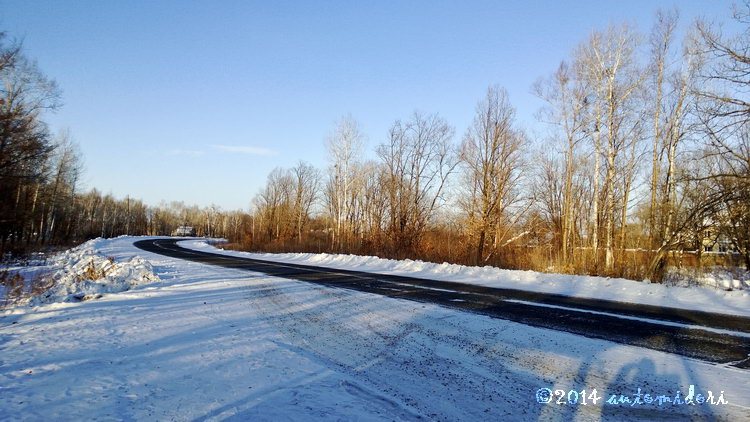 Do you remember this photo? Yeah... it was here, facing the other side. Now, it's not called somewhere, but nowhere. The good thing was that the bus stop was like a security post, sheltered and had a bench inside. I could sit down and protect my head from the icy wind.

My mind wandered to a time in Hokkaido, inside a tiny wooden train station. The road behind the wooden box was smoothly paved -- and silent. Dense trees stood along both sides. There was only me. I didn't know that the next train was an hour and a half later. Except that it was summer at that time, this current situation resembled a lot. However, I was double worried. If there's no bus until tomorrow morning, I certainly won't survive the night. Even now, I have to keep myself moving every now and then. Maybe I can follow the pathway where that passenger who got off the bus just now went. Okay, I see a house over there. Maybe I can ask for shelter through the night. But how would I explain that?

A nice sedan came my way and by. Silence. Two three minutes later, another car came by. But no bus. Shall I challenge hitchhiking?? Why not be a true backpacker? Shall I, shall I not? Oh not that one. That car is full of men. Hail a car only when there's a woman inside, I told myself. Oh ya, suppose the car stops, what shall I say? I want to go to the railway station, but there's no bus. How do you say that in Russian?? In Zhalong I could say that in (broken) Mandarin and got a lift.

I opened Seven Years in Tibet as to pass the time, but could hardly concentrate. What can I do here? Ah. I pour the coins I had gotten back from the bus conductor on the bench. I had purposely kept them separately in a small plastic bag so that I would be able to figure out the bus fare and jot it down on my book account. Five, ten, twenty, thirty, thirty five. Oh so the bus fare is 15 rubles. It was actually written on the ticket. I know. It was written on the bus, too. But how I could I understand "15" was bus fare?

A century later -- seeming so -- a bus came into my sight. I jumped off the bench and hailed with all my might. I am small. The bus driver must not miss my figure among the trees. This might be the last bus of the day. Please, don't pass me by. You know what? The bus conductor was the same bus conductor as the one on the bus I had come with! If only I hadn't been too worried, I would have seen the place of the last stop and be here at the same time but without running my mind insane. It did feel like a century for the bus to come, but for sure it had been at least half an hour. Heeeyaaa, Sonjaaa!!