In Indonesian, "kunyah" means "to chew". In Russian??

From Birobidzhan to Khabarovsk, January 2nd 2014 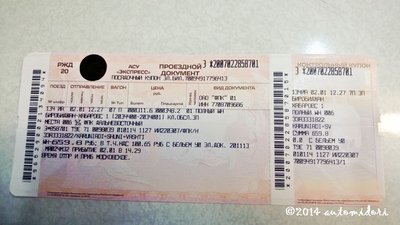 Once again I queued on the very wrong side of the train. "Houskvousk rousk vousk." The train attendant pointed to the other end of the train. History was repeating itself for me.

Suddenly again, "Houskvousk rousk vousk." The lady attendant touched my arm. I turned my head. She pointed to the steps and then inside the cart.

"You mean I may go to my cart from here?"

I took that for "yes". So I got up. Once again, I started the journey from one cart (couch) to another, pushing steel handle doors one after another. This time I took care to keep my hand gloves on. Surely enough, after going through just two carts, I felt myself shaking. The train started to move. If I had walked on ground toward the other end of this train, I would have not made it. Once again, the freezing wind from between the carts smashed my rosy cheeks.

Birobidzhan - Khabarovsk only takes 3 hours. Therefore I used my upper bunk only to place my backpack. The lady from the lower bunk invited me to sit on her bunk. She was with her daughter who shared the opposite lower bunk. As I sat on her bunk, she made the bed for her daughter. When she was done, I thought she was going to continue with the bed where I was sitting on. But when I stood up, "Houskvousk rousk vousk." With her hand she signaled me to stay. She was like insisting. So I stayed.

The daughter returned from probably the toilet, and then happily bounced herself on the neatly made bed. She reached out for her iPad. "Houskvousk rousk vousk." they said to one another cheerfully. "Ah!" As if they suddenly agreed to do something together, the two left our compartment. I sat on their bunk mouth opened. Am I seeing this right? The daughter had left her iPad on the table and so did the mother with her mobile phone. There was nobody else. Just me, "They must have been overexcited", I thought.

When they returned, I watched their facial expression closely. I expected they would be looking shock realizing that they had left their valuables on the table.

No. They continued laughing as that iPad was just a pillow case. And then the daughter stretched her legs on her bunk, reached her iPad, leaned back, played with her iPad again.

Ooops!! Where am I?! Had not my alarm clock rung?? Have I passed Khabarovsk?? I jumped up. Probably the trauma of almost missing my stop was still on me.

This must be her seat and she wants to sleep, I tried to figure. I moved away.

But, "Houskvousk rousk vousk!" she repeated louder. Oh, is she angry because I have taken her seat? Well... there hadn't been anybody anyway. I stepped away further.

"I am getting of in Khabarovsk," I said.

"Houskvousk rousk russkiy?" asked the younger one. I shook my head. "You speak English?" she asked in English.

The three ladies in chorus: "Hwoooo....!!" They clapped their hands.

The first lady looked at the younger one with a 'can you help me?'

The first lady kept silent. She looked back at the younger lady with an 'any idea where that is?'

"Thank you," I replied, and then put the tangerine in my bag. I don't eat much fruit and tangerine is one of the don'ts.

You know, in Indonesian "kunyah" means 'to chew'. Hence, to me it was like, "Chew it! Chew it!" Could she actually been saying the Chinese word “gūniang"?? That means "girl" or "daughter" in Chinese. Whatsoever, for my Indonesian ears in a situation with food, it was really comical. "Kunyah! Kunyah! Nyaammm... nyaammm... nyaammm."

When I felt the train slowing down, I quickly got up. I am not letting a train attendant come to me for the second time. I looked at my three new nyam-nyam friends. They already put on their coat, hat, and shawl, but didn't show any sign of getting off. Maybe they are not getting off at this stop, I thought. For their kindness to me I waved my hand at them and said, "Bye, bye."

The two older ladies kept on chattering. But the younger one pat their lap and then pointed at me. "Houskvousk rousk vousk." The two instantly turned their head towards me. "Bye... bye..." The three waved their hands. 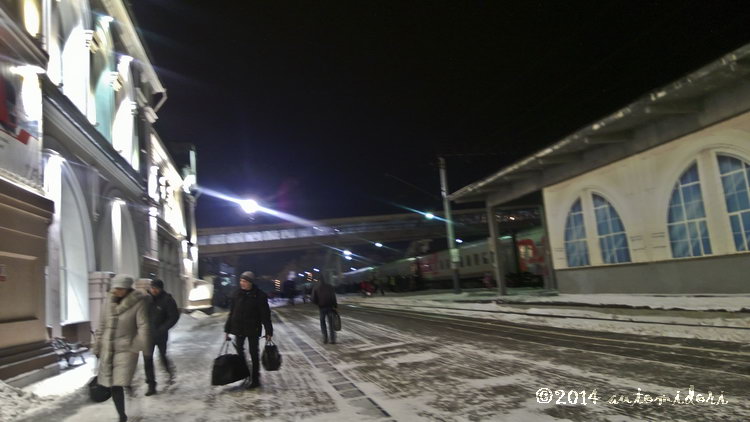 That was my train. Here I am, in Khabarovsk.

It was 9:30. Fearing that it would be too late and I wouldn't get a taxi, I rushed out the railway station. However, as I pushed the steel door opened and breathed Khabarovsk's winter air, I witnessed Khabarovsk wide awake. Hustles and bustles were everywhere. Lights here and there flickered the snow on ground. 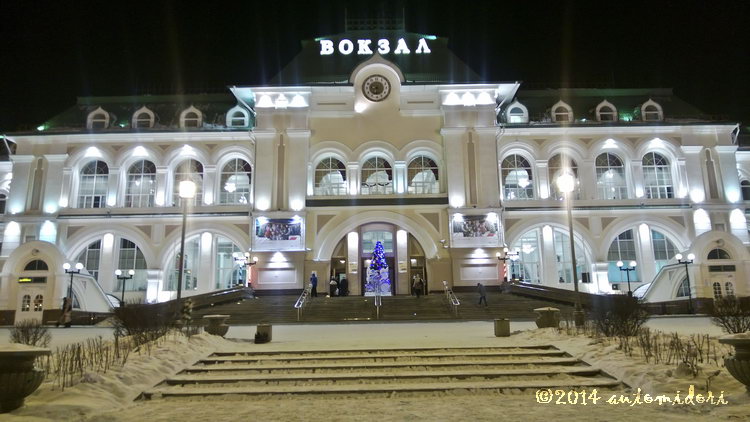 If so, there's time for another shot. Welcome to Khabarovsk! This train station must look best at night in winter.

"Byeeee! Byeeee!" That voice was so familiar. They were my three new nyam-nyam friends. Several meters away, they had recognized me.

Took me some thinking to guess "Kunyah". Most likely she was saying "Kuyshay" - that's how it sounds for Russians. It is dialect, softer word for "Eat".

Thanks for letting me know, Katya.