Rolling and Rattling in Khabarovsk

A compilation of fascinating trams and buses.

Contrary to my experience at the market near my hotel, I was astonished by the figure of buses running back and forth in Khabarovsk. The night when I arrived in Khabarovsk, I had no time to notice, because I was preoccupied by deep anxiety. Aha. What a thing to say. Now that I could think calmly... (aye!) I could see what kind of bus. 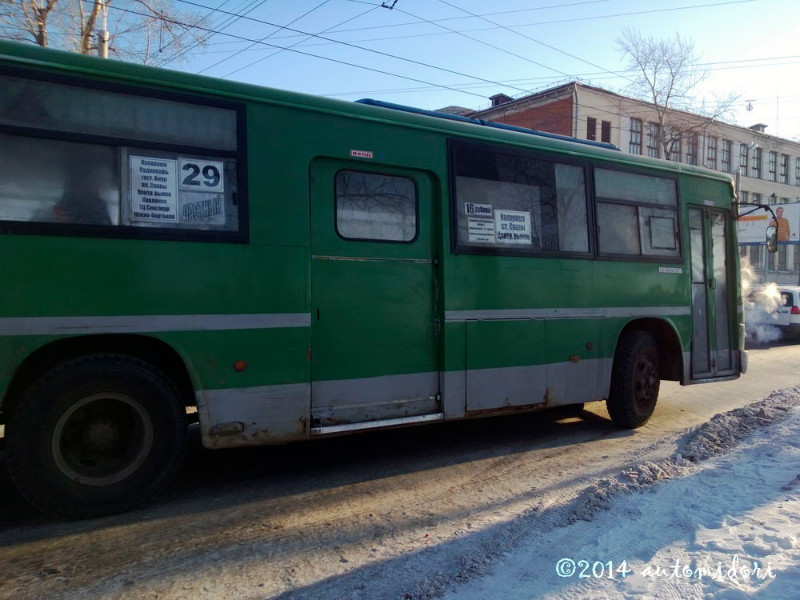 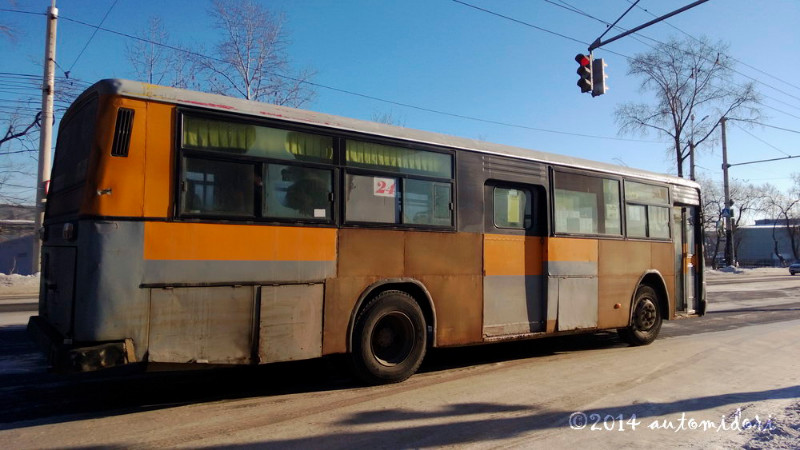 Not so long ago, when everyone went to the market riding sedans, I thought these were rich people. But now, it was like a hand turned back. First Intermezzo: This is my view as a foreigner. "the Russia I (not you) saw" is written on top.

My amazement didn't end just there. I got on the buses -- many times -- and never once had the bus conductor needed to push the door opened. The door worked 100% automatic and smooth. Yeah, yeah... I hear you. "Of course. Why not? You think?"

This is what I think. In my hometown, when I'm in a serious broke condition, meaning no budget for taxi, I am sort of destined to get on what we call 'busway'. Fate has it that the busway units running from the closest terminal from my residence has never been renewed since the first governor who invented busway in J Town. My destined busway started running in January 2006. To this day, after Mr. Governor S has been succeeded twice -- uhm, how to say? -- it's still the very same unit with poor maintenance. I said "fate", because the busway units that runs J Town's major line, along the president's palace, where the national flag of a state visitor would be set up, has been replaced by nice (for now) brand new ones. Second Intermezzo: This is my view as a local. When all passengers have aboard, the driver will press a button, and the door will close semi-automatically. It has long been 'semi', because the bus conductor has to lend a helping hand for the door to close. Push, push. Nevertheless, my destined busway still looks much better than these buses in Khabarovsk.

Probably Mr. Governor of J Town had laughed when he read -- if ever -- my complaint. "You have never been to Khabarovsk, have you?" he must have said.

Now my verdict. "Don't judge a book by its cover " also applies for the buses in Khabarovsk. 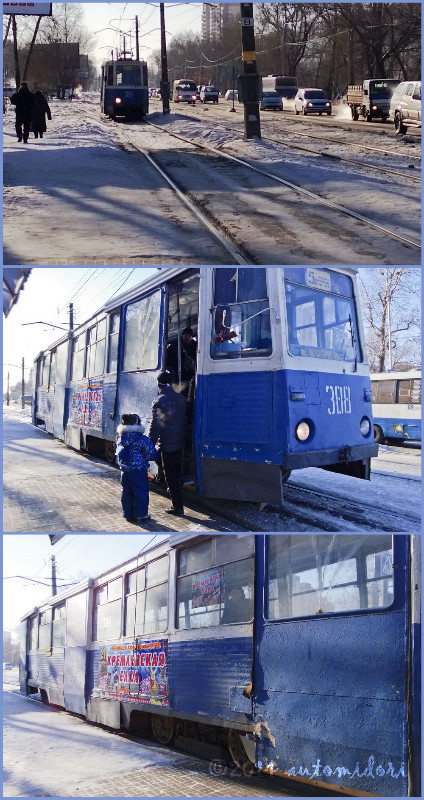 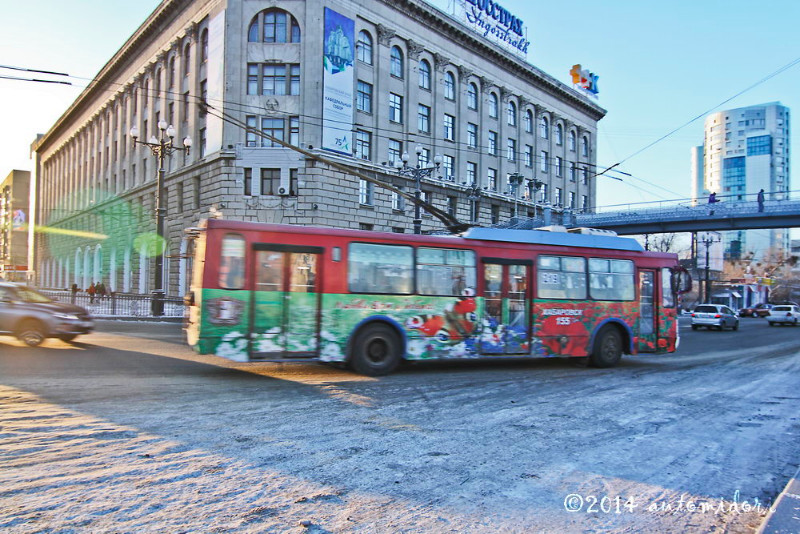 Like wrinkled Grandma who wears heavy make up, some trams are attractively colorful... 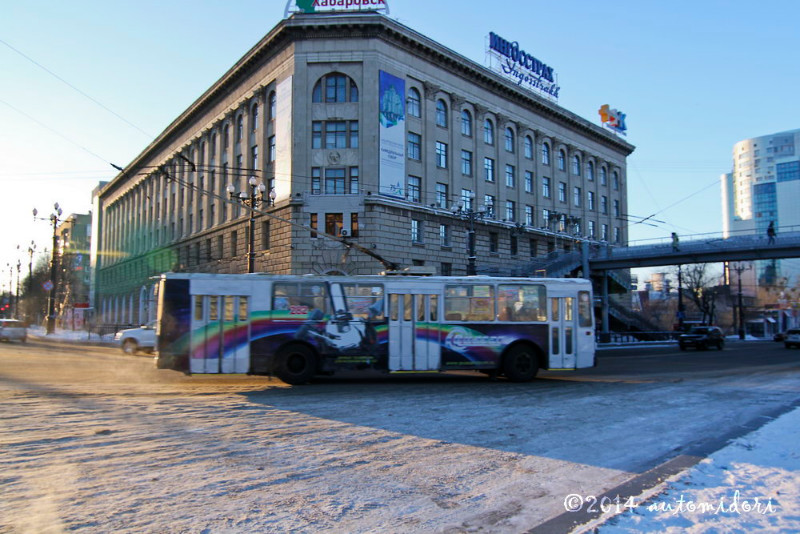 ... on the outside, from afar. Once you get on, squeeekkkk.... brmmm.... brmmm..... squeeekkkk of natural stereo will fill your ears and jolt your heart, if it's your first time. Faster than light, my mind flew to J Town. In J Town, after such a sound, you'll be lucky if the busway can make it to the nearest stop. I'm not exaggerating saying that the sound jolted my heart. Seriously I was worried. And in a split of second, once again I worried what my friends would say if this tram collapse and I get wounded. Where was that? Khabar.... what?? Somewhere near Moscow? You said Russia, didn't you?

Because I couldn't jump off before the next stop anyway, I glanced at other fellow (local) passengers. Some were dreaming through the frosty window glass and some were drowsing. Oh well. Squeeekkkk! 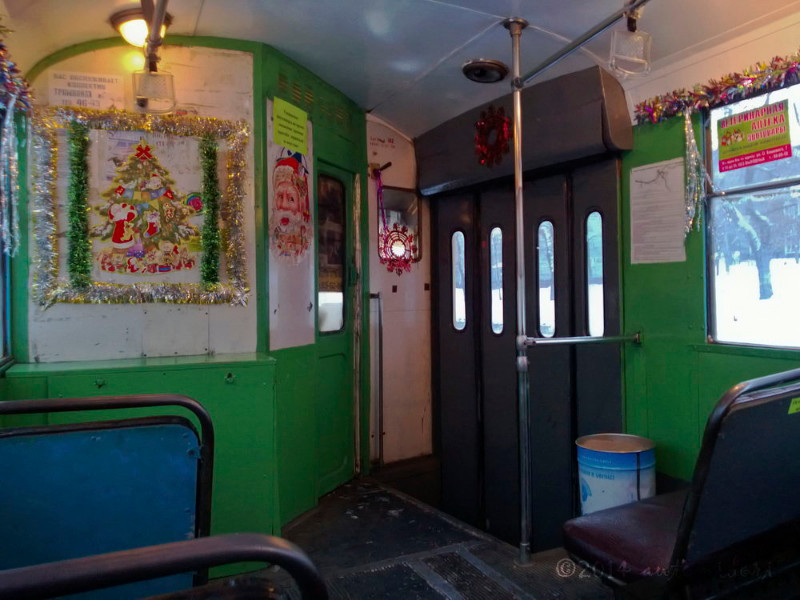 Here's the interior. Many of the buses and trams I had been on, were decorated with these Christmas ornaments. And yeah, that's the 100% automatic door. The bus / tram conductor's job is only to collect the fare, no need to be ready by the door. With me, they had an additional job which was to let me know when I was arriving at my destination. It wasn't only on the night of my arrival in Khabarovsk, that I showed the bus / tram conductor an address on a piece of paper and they paid serious attention for me to get off at the right stop plus pointing to which direction I should head from that stop. 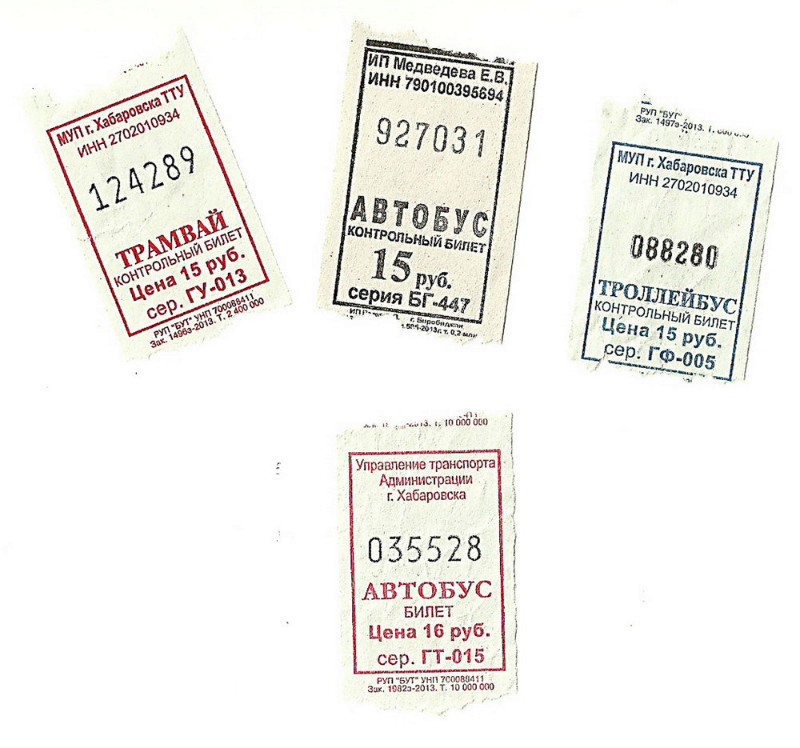 Here's a sample of my bus and tram tickets, in case anyone is wondering whether or not I did pay the fare. LOL The tram fare is 15 roubles regardless of distance, and so are most buses. There are a few buses that costs 16 roubles, like in Birobidzhan. I can't tell what kind of bus cost 15 roubles and what kind cost 16 roubles. It's no big difference anyway. So I never bother. Usually the fare is written on the wall inside the bus: 15руб or 16руб in big letters. In case it's not and you give 16 roubles to the bus conductor of a 15 roubles bus, I guarantee the bus conductor will return your 1 rouble. If he doesn't, that must be complete absentmindedness. Russians are human, you know. 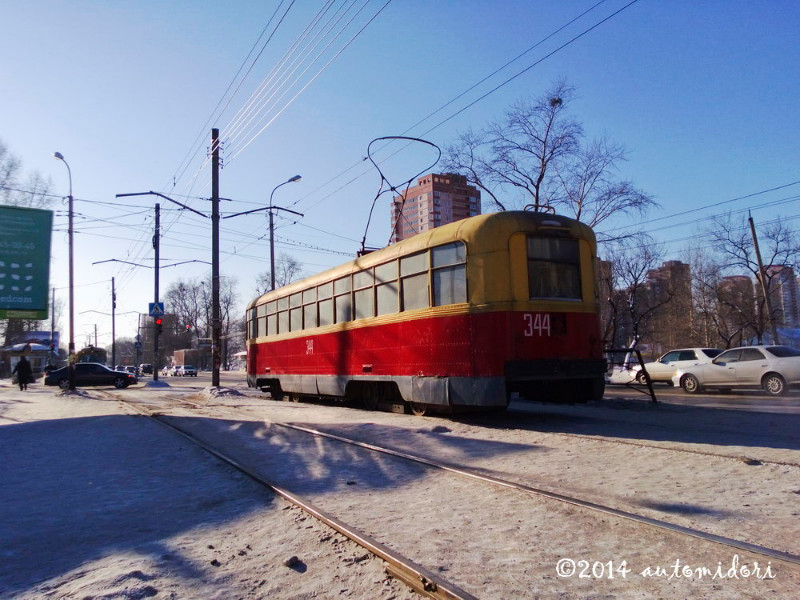 If trams were also humans, this would be the middle-aged tram. 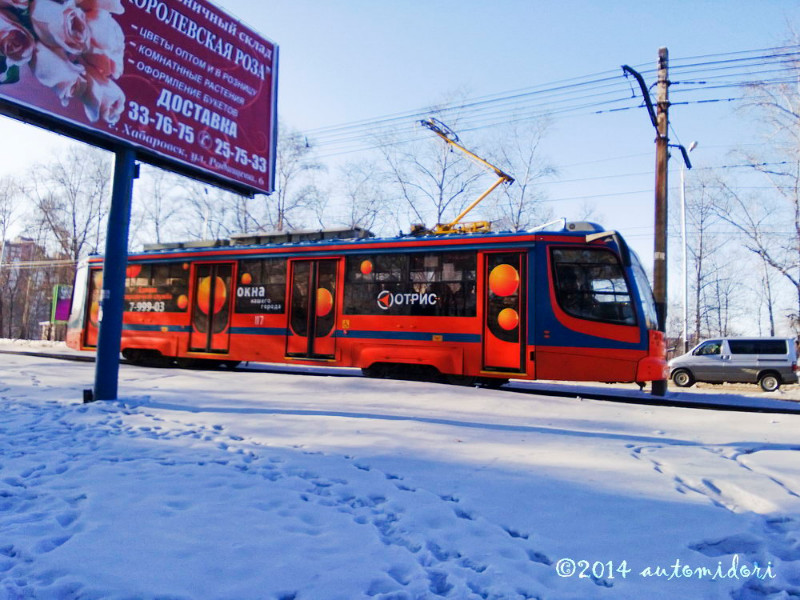 And this is the teenager: vibrant and good-looking. Unlike Grandma's voice, hers is crisp and clear. No squeeekkkk. 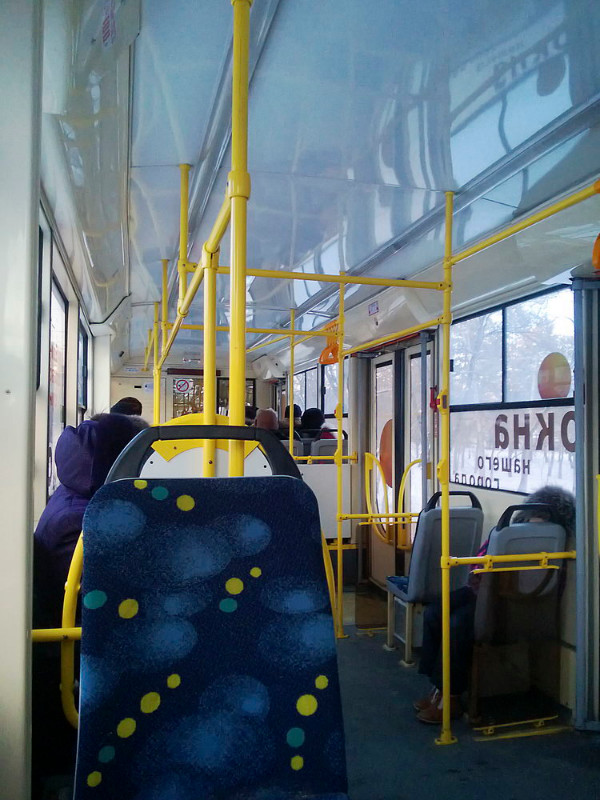 Inside a teenager there's yet no cholesterol, let alone bone loss. 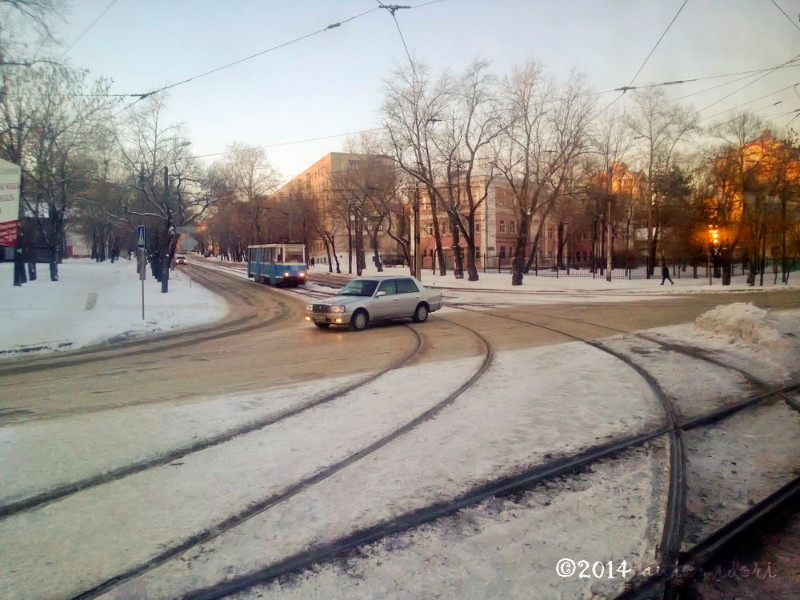 Here's the massive tram trek. At certain times, the driver would get off the tram with a long steel bar in hand. She or he would go to the front of the tram and do some krekkk krekkk on the trek, and then run the tram again. I imagine that would be a heavy task if snow happened to be falling hard. 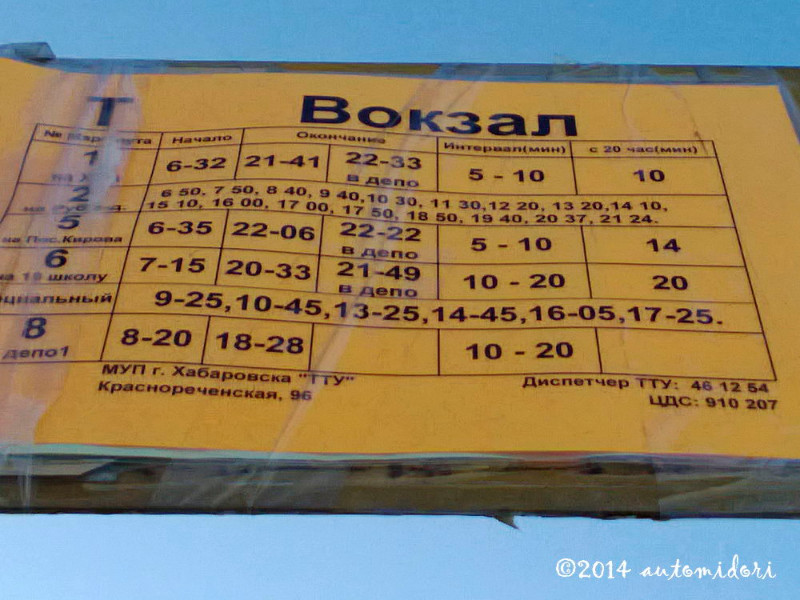 This is the tram's timetable. All trams -- hopefully I'm not mistaken -- centralize at the train station. 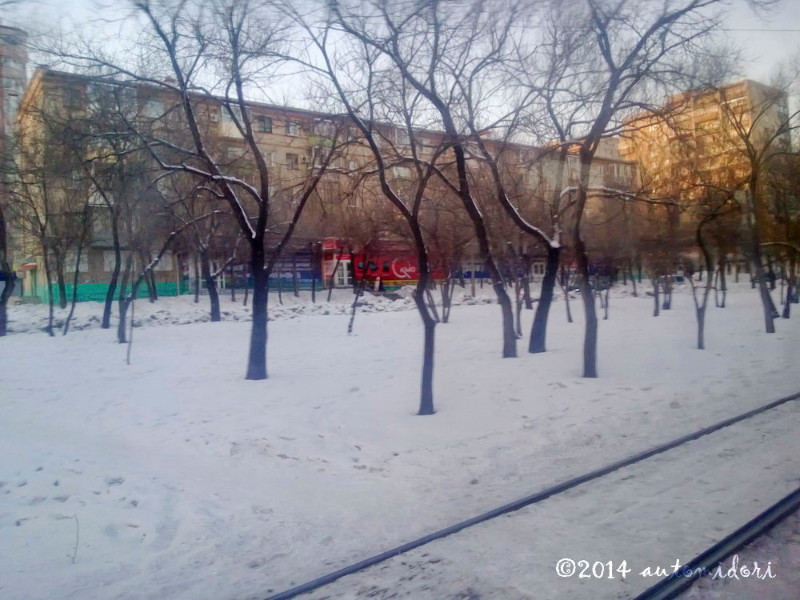 Oh ya, this is, I assume a park, starting from the tram station across the train station. I guess so, because I saw benches. However, in deep winter like now, the park becomes a no-man's park. 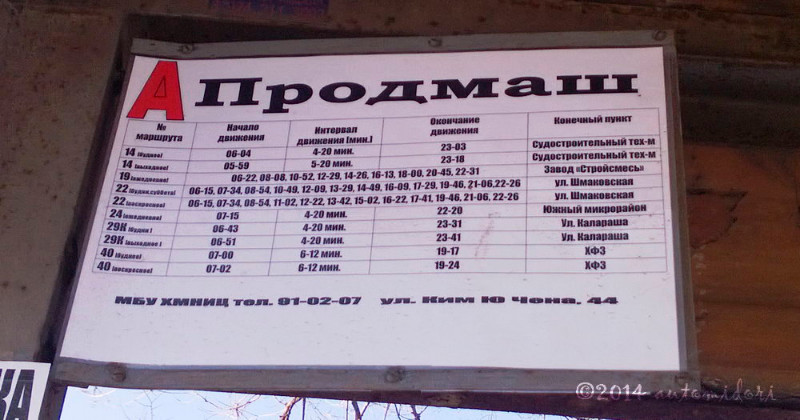 The bus timetable looks almost alike. Although I can't read these timetables, they do help. I can find out whether the bus I need passes a certain bus stop by looking at the numbers on the left. The next column must be the time of first bus arrival, and then time interval, and then last bus arrival. The three lines in between, e.g. for bus number 19, the bus arrives only at 6:22, 8:08, 10:52, and so on. Correct? Wink, wink.

What I enjoyed seeing most during these rollings and rattles, is how Russian men let their spouse get on first, how they gave a seat, and how they held their spouse's hand as she got off the bus or tram. For me, it's so film-like and yet real. But then, a debate with myself began.

"So? Why should you be impressed now?"

"The way these men do it is different."

"How different, huh? You think holding a spouse's hand is more impressive than climbing on a driver's seat?!"

"Uhm, well, I can't recall seeing a man treating his spouse with such manner in China. Even in my home country, it's different. The way, is different. It's not that they don't respect woman. Not at all."

Rolling and rattling through the ice and snow, I asked myself why I think it's different until I came to this illustration: When we led Mr. Governor (Pardon me, I'm being rather obsessed with him.) sit on the front row for a performance, it is not because Mr. Governor has poor eyesight. It is not because we pity him. We respect, we honor him. Hence, he comes first. The motive reflects on the manner. The manner forms the way of doing. The act might be the same, but the way of doing is not the same.