where I met kopek for real

Before leaving for Khabarovsk, I had learned that there's a snow festival in Khabarovsk. But when I asked the friendly and little-little-speaking-English receptionist at my hotel about it, she told me that the festival hadn't begun yet. However, when I was on my bus adventure, my bus happened to pass Lenin Square, and... 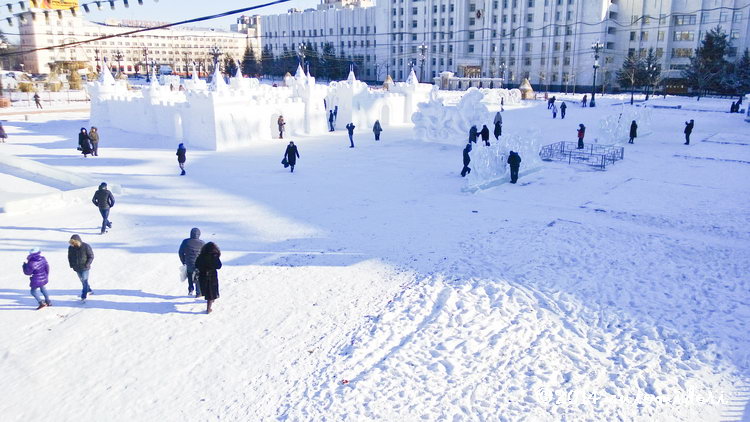 ... yippeee! Isn't this that famous snow festival of Khabarovsk? Or is it not? Whatsoever, I got off the bus. I always adore vast snow-covered landscapes. Using Lumia, I took this photo from the overhead bridge, in order to get the whole picture. 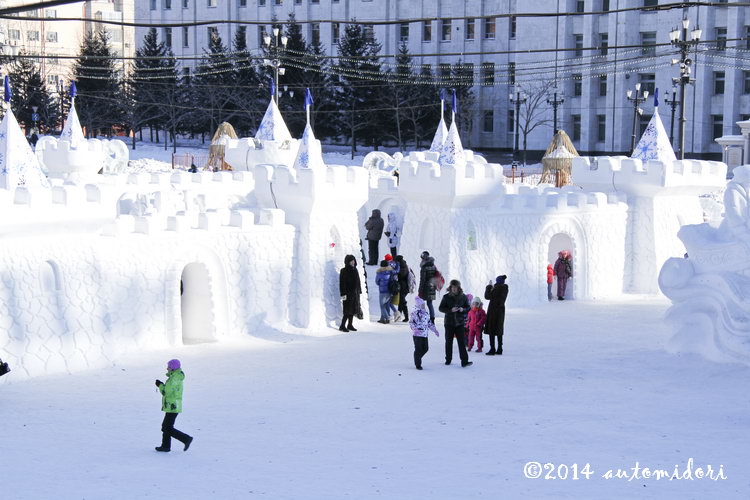 There was a snow fortress, and... 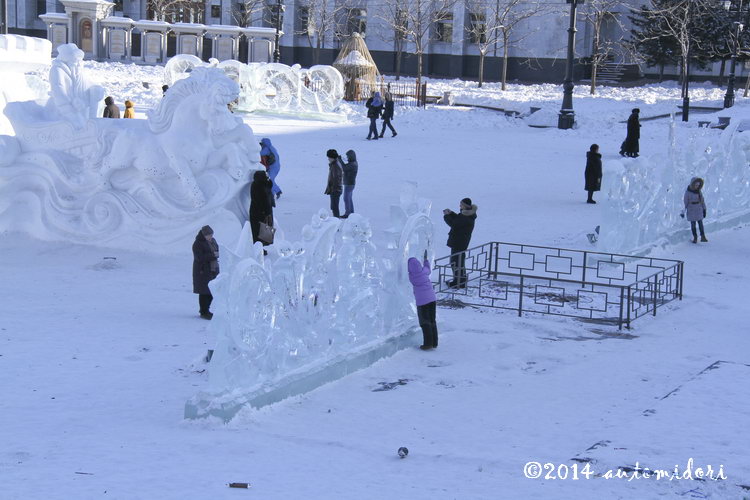 ... various ice sculptures. Indeed, it was a fantasy land.

Now the picture from eye-level. My fingers started to feel numb and aching. Numb but aching, how's that? Aha. I did the finger therapy I had learned (the hard way) in Zhaolin Park and my fingers were soon sensible again. My mind might be not, though. 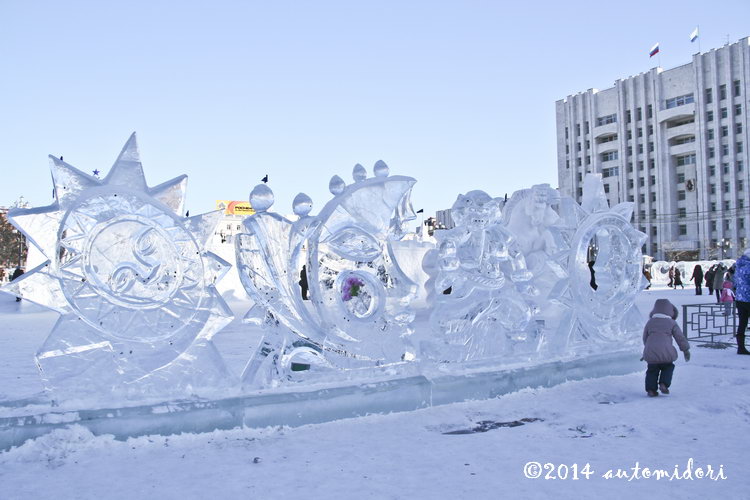 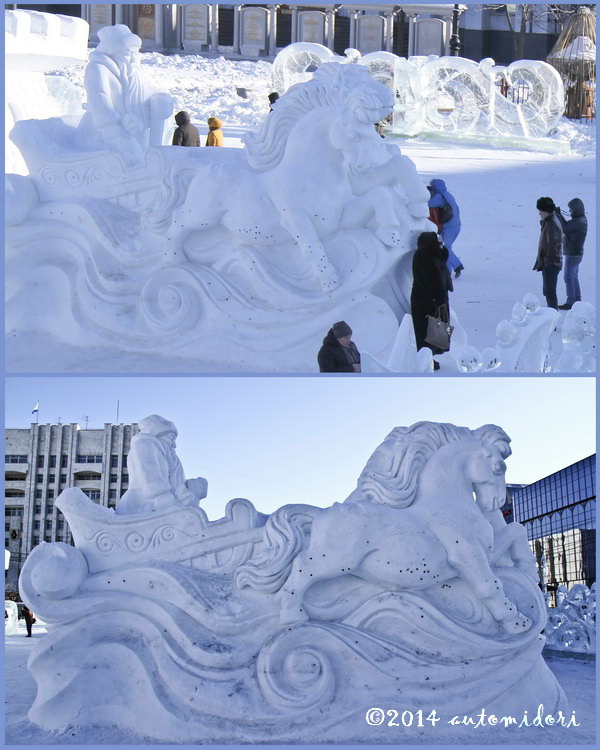 It's gigantic. But, it's only half as good as the sculptures in Sapporo Snow Festival. The sculptures here, in my opinion, lack details compared to the ones in Sapporo. Unfortunately, I haven't written about my trip there. Otherwise I could provide you with a link to the photos. I am extremely proud to tell you that my home country, Indonesia, won 3rd prize at the 40th International Ice Sculpture Contest in Sapporo last February 2013, It was a sculpture of a Bali dancer, carved by Balinese craftsmen. Balinese, undoubtedly highly-skilled sculptors. But don't forget, we don't have snow. In the middle of the snowstorm, I could feel the ends of the Bali dancer's throw wither in the air. The details had been made extra delicate. It's a pity we didn't participate this year. 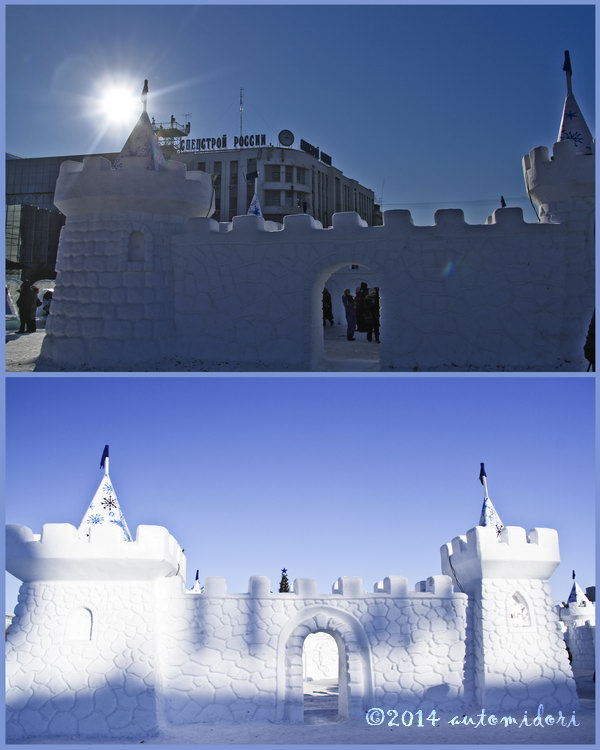 Nevertheless, something like this, I didn't find either in Sapporo nor Harbin. Uhm, I meant to play with the sunlight. However, I failed to compose the sun exactly on tip of the flagpole. 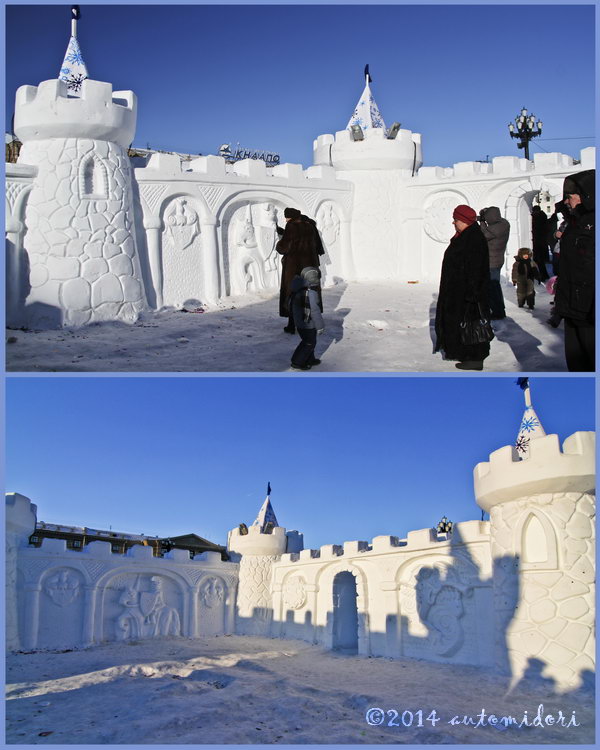 Here we are, inside the fortress. 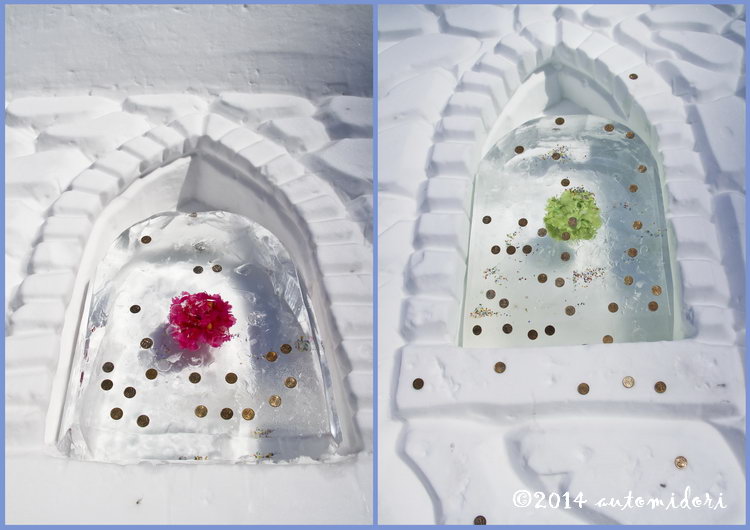 An interesting thing to me was coins stuck in the ice. 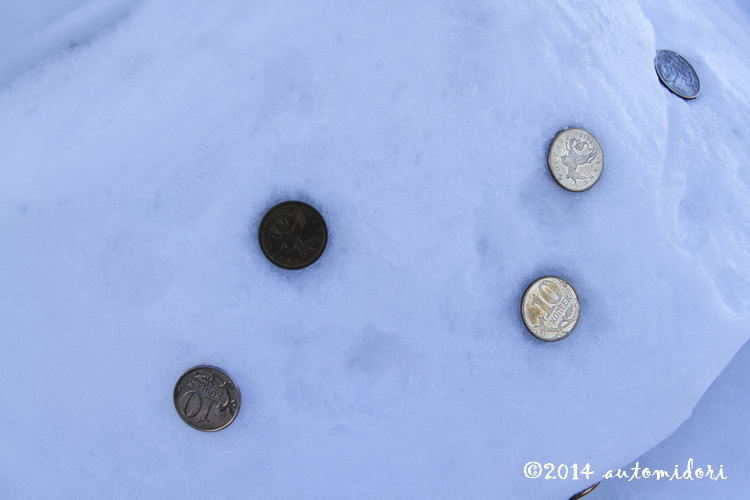 Here's a close up sample, and see that 10 kopek coin? Kopek! That's one more thing that had laid Russia deep in my heart, which I forgot to mention in my first post. Kopek for me started from an audio storytelling program called Sanggar Cerita when I was a kid. My favorite of all the stories Dad bought for me was "Kotak Ajaib". In English it's "The Magic Box". Dad and I, and our housekeeper, loooved this story. We listened to it over and over. Then, the currency mentioned in this story was "kopek".

"Where is kopek used?" wondered our housekeeper.

Dad, always curious about names and words, looked it up. I have no idea how he did that, because Google was still in school -- like me. "It's Russian money!" cried Dad in front of his bookcase in our dining room (Dad's books were actually everywhere in the house.).

Russia?? Russia. That was Russia's first sticky-note in my little heart, before I knew ballet.

It's kind of a thrill for me, that now, I see kopek, for real. 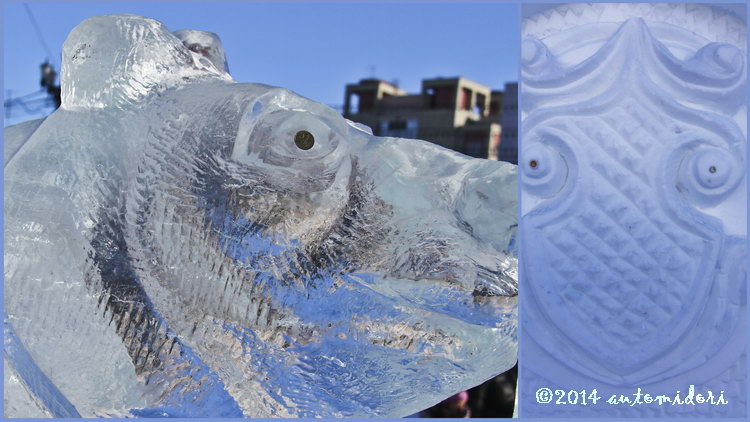 People formed eyes with the coins, too.

If you take a close look to the horse carriage sculpture above, you can see dots all over. Those are coins, also. I was impressed that these coins could stay 'safe'. As if my mind was being read, a little girl attempted to peel a coin off. Before the coin was completely off, her Mom noticed. "Houskvousk rousk vousk!" She hit her daughter's hand though gently, and her daughter got her hands off at once. She even took her eyes off the piece of ice, and followed Mom fearfully. That's how these coins stay 'safe'. 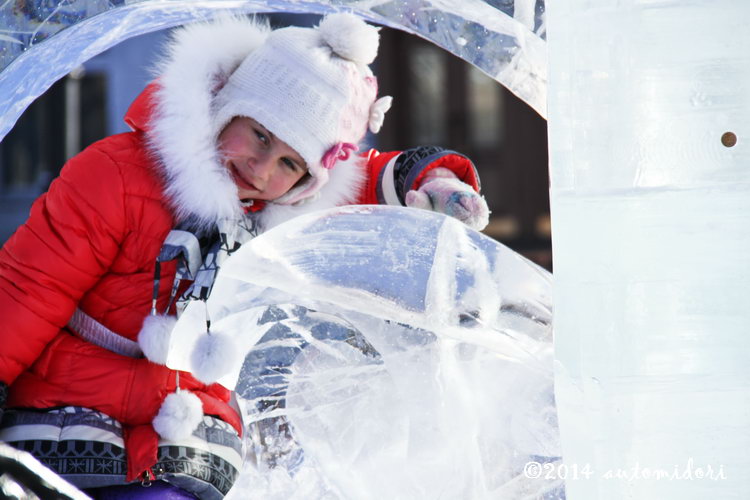 Besides sticking a coin to the ice, you can stick a child also. Aha. No, no. I'm just kidding. 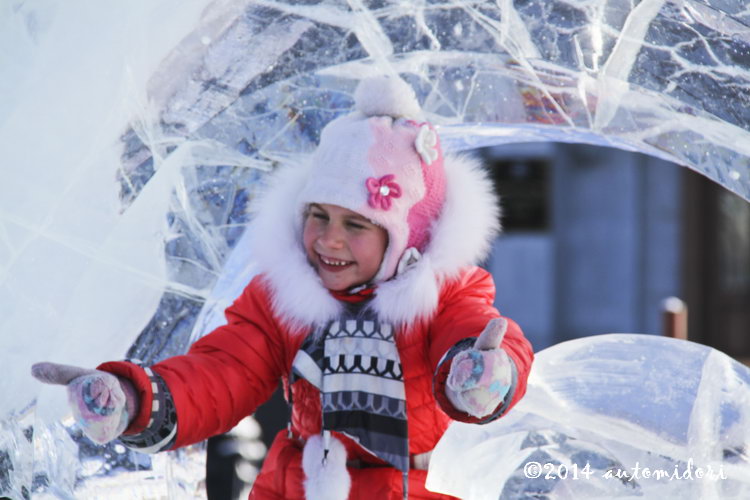 Normally, people posing to a camera is the very last thing I would be interested to take a picture of. However, this girl was just way too cute. She made dozens of cute poses for her Mom. She must be a natural-born model. 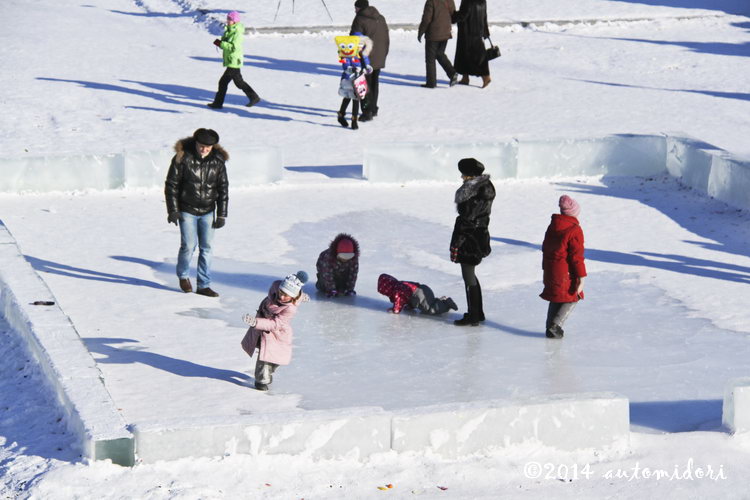 Children don't just pose on ice. They skate, too. 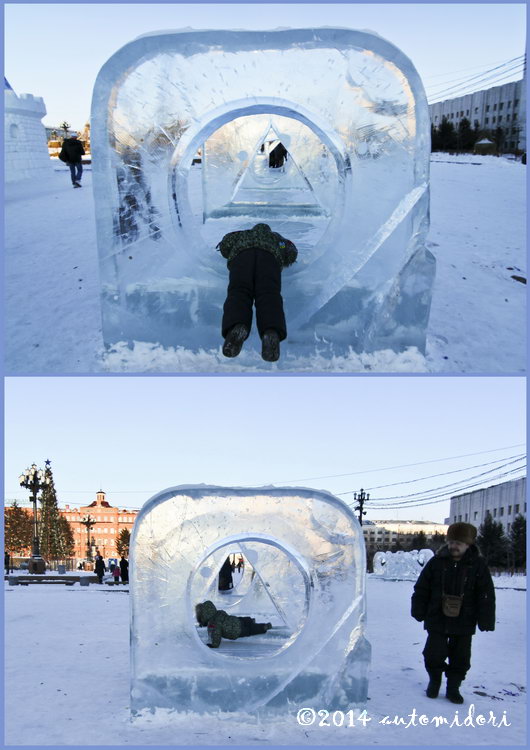 And slide in, slide out. This boy's grandpa (looks like) seemed to had as much fun watching his grandson. And I, just loved to see such a scene.

Nevertheless, fun in 2014 won't be complete without any attribute related to Sochi Olympic Winter Games. 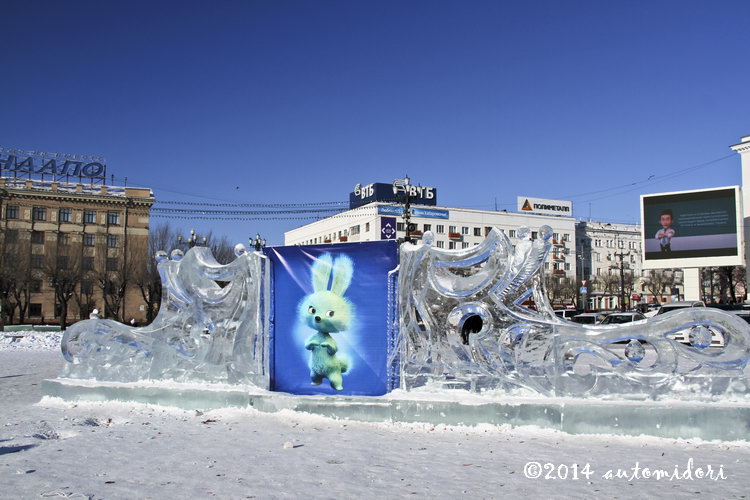 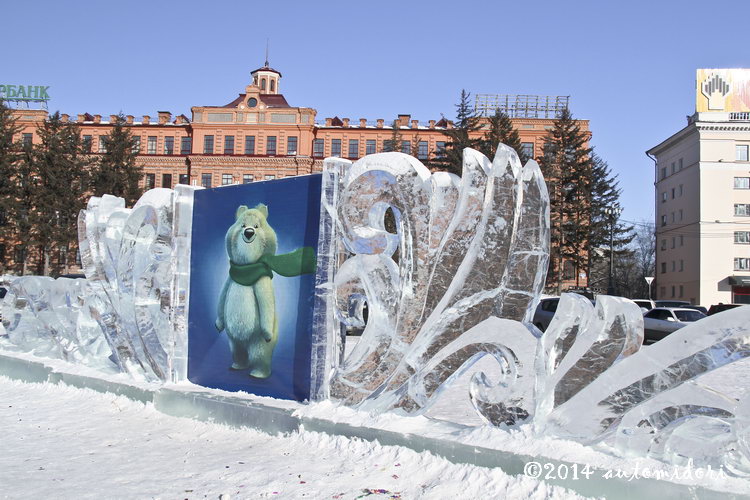 Please bear with me, I'm sooo fond of this polar bear, Bely Mishka.

Yeah... I hear you. I never take photos of the third mascot, Leopard. I'm not fond of scary animals, you know. I hear you again. I know bears are also wild actually. But they are plump. 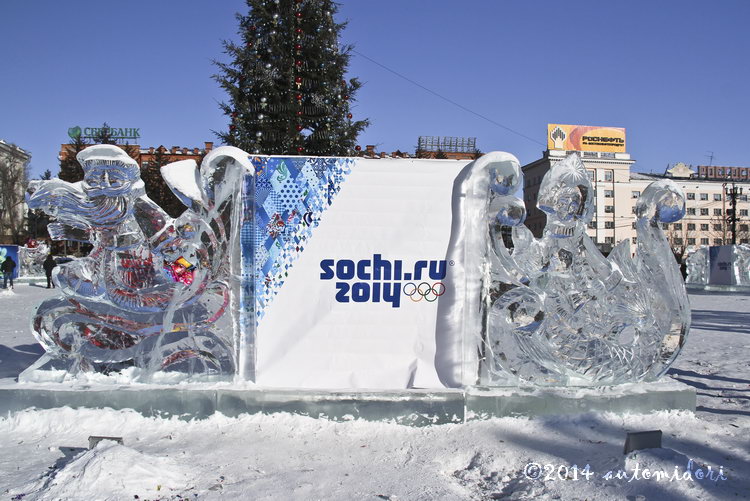 Alhough I couldn't be in Sochi for real, it was nice to have something about Sochi. 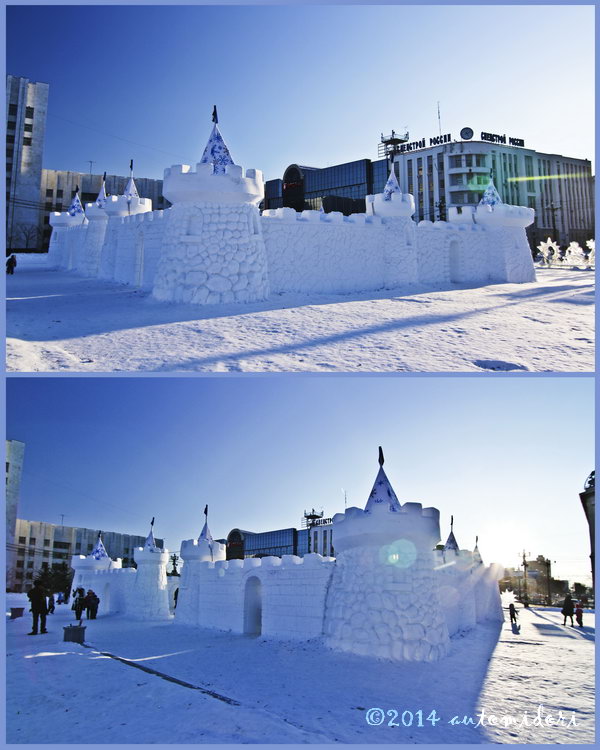 I'm leaving Lenin Square. But, I have a few more interesting things to show you. Till next post!