Ups and Downs in Vladivostok 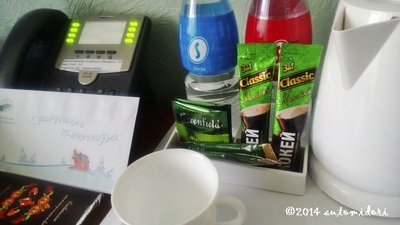 I still have a story about this. It's not just about the coffee. Do you see the 2 bottles of water? Because I am a faithful fan of the color blue, I picked up the blue one first and fixed coffee with it. I was wondering why the other bottle was red. Well, that's to make them look attractive on the table: blue and red, like the Russian flag. So did I answer myself. When the blue bottle was empty, I reached out for the red one, although I don't like the color red. Why are they air bubbles on the surface, I wondered again. Well, because the temperature outside is extremely low. So did I answer myself again.

Woosh! cried the red bottle's cap as I turned it opened. Well, that's because the air pressure outside and inside the bottle differs widely due to the temperature inside and outside the room. What a stupid (seemingly) scientific analysis. At my first gulp I realized that. It's soda! Carbonated water! I told you before I don't consider myself an experienced traveler. It was my first time experiencing a complimentary of soda water in a hotel. Plain mineral water, tea, coffee... these I know. Then without anyone telling me, I learned, people here drink mineral water but also soda water. Plain soda water. Or do Russians sometimes mix soda with coffee or tea? I was glad my favorite color wasn't red. Otherwise I would have poured soda into my coffee. 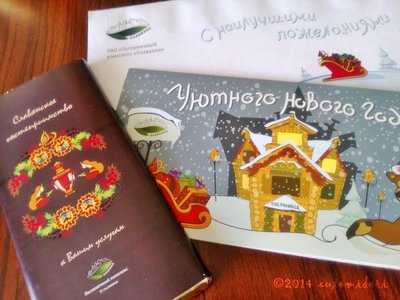 It was my first time also to receive a greeting card and a bar of chocolate from a hotel during Christmas - New Year Season. That's not to mention chocolate of good quality and appreciable size.

Whenever I come to a new place, I can't stay long in the room. My happy feet are always too excited to explore. But wait, I don't have enough roubles. So I went to the front desk. Hotels usually have a money changing service, don't they?

"Sorry, we don't have," replied the front desk staff. I was suggested to go to the railway station. Maybe, she said, there's a money changer there.

"Is there any other place closer?" I asked.

"There actually is, but it's closed because it's new year."

New year! Damn. How could I forget about that? Andrey told me more than once that shops (meaning business) will be closed on the 31st and 1st. When he mentioned that, it was regarding food. However it should have occurred to me, it's not food stores only that take vacations. I regretted myself for not exchanging more roubles at Suifenhe International Bus Terminal. Thinking that a money changer in a bus terminal usually don't offer a good rate, I only exchanged 100 USD for 3000 RUB. I already used 500 RUB to pay for the taxi. Can 2500 RUB last for 2 days? Tomorrow night I'm going to get on a train which for sure won't have a money changer. What if I run out of cash and need to buy food on the train? I began to panic. I did see ATMs. But the thing is I have prepared USD bills already. It would be a waste to withdraw money from an ATM.

Now, which side is the railway station? The front desk staff seemed to have trouble explaining the direction to me in English. According to my map, it's nearby. I saw it on the way here just now. I breathed Vladivostok air. Nice atmosphere... but I don't have money. Hmmm... another hotel. Primorye Hotel. Still believing there should be a money changer in a hotel, I stepped in.

The lady at the reception desk was on the phone. She smiled at me but kept on talking. There was no other staff. I waited. But it seemed to be an ongoing lady's talk. I didn't see any sign of money exchanging sign there and was getting worried the money changer at the railway station would be closed soon. So I walked out. But as I was just about to push the door open, I heard,

I told her but to my disappointment she answered, we don't. "We only have a cash machine," she added. I laughed loud. Then I looked at her face... oppss, something's wrong.

You know what, I thought she said, "We only have a Christmas tree."

I apologized and explained that I wanted to exchange my US dollars since I have it already. "Where's the closest money changer from here?"

"There isn't. All are closed, because it's New Year. In Russia, during New Year many shops are closed."

"How much do you want to exchange?"

I didn't care about best rate anymore. "No problem!"

"Do you have small change?"

That was also the first time I experienced transaction with a Russian who spreads all the bills, sheet by sheet on the table. Because I asked for small change, the table in front of us got covered by bills like a tablecloth. Then it happened again, and again, with other people in other places. In shops, at the cashier, they have a little tray where they place their customer's change, just like the shops in Japan.

"The day after tomorrow, you can go here." She gave me a money changer's name card. "They will have a better rate. But today they are closed."

"In Khabarovsk the rate would be better than here. Maybe. We are sorry, we can only offer you this."

"No, no! No problem at all! This is very very helpful. I truly appreciate it. Thank you so much."

After all, I got exactly the same rate as it was in Suifenhe, so there was nothing to regret. I felt like I wanted to hug her.

In my mind I was dancing like a child. Turning round and round. Tralalalala.... I'm in Russia. Vladivostok is a hilly town consisting of unique architecture, big and colorful. FYI, Vladivostok was closed to foreigners in the Soviet days. Maybe that's the reason for the original atmosphere felt here. It's somewhat like walking into a time tunnel.

Not far from the railway station, my eyes stumbled on a food stall. Food! Andrey had suggested me to bring some supply from China. But my backpack was already too full. So now, luckily there's a food stall that's still opened. The stall was covered with many photos of the menu. There was a little window in the middle to serve customers. Now, which one do I want? Everything seems enticing. And how can I tell the man which one I want? I can't read what it says. Should I ask him to come out and see what I am pointing at? 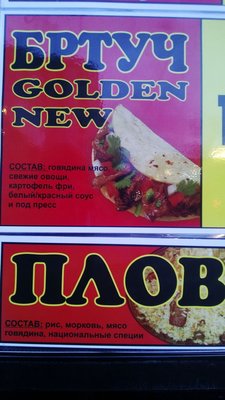 Doesn't this look nice? The food, I mean. "Excuse me. I want one of this." I brought my cellphone to the window and showed the man this photo. 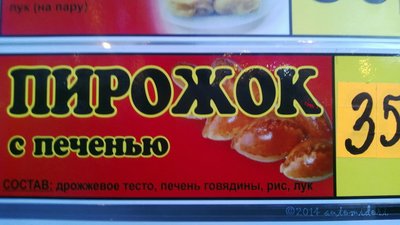 I returned to the side of the stall and took another picture. "Then give me this."

"You also don't have this one?"

""Houskvousk rousk vousk. New year." Then he pointed to the various ready-made bread displayed behind the glass next to him. 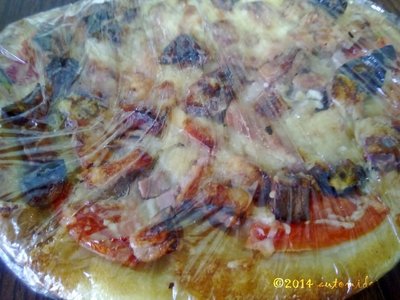 I bought this pizza and some more bread. I really didn't remember that my hotel rate was included with breakfast.

It was then the second time. The food seller spread the bills of my change over the little shelf in front his window. I gave him a hundred rouble bill, because I had no idea how much the bread cost and it was not written either.

I turned back. With his palm facing me, he signaled me to wait. Several seconds later he appeared with coins. Oh... so he still had some more change to return to me. I was dumbfounded by his honesty. This is Lenin's statue. There's something particularly interesting about this. Several weeks ago, I uploaded this photo on my Flickr account. In order to make a better caption, I searched the internet and found Wikitravel about Vladivostok mentioning about this Lenin Statue like this:
If you're a connoisseur of Lenin statues, don't miss the one overlooking the train station from the west, next to the post office (the popular joke goes that the World Proletariat Leader says "You're going the right way, comrades", while pointing at Japan). But now, there's nothing mentioned about Lenin's statue in the same Wikitravel about Vladivostok. Did someone delete that part? I'm pretty sure I got it from Wikitravel. 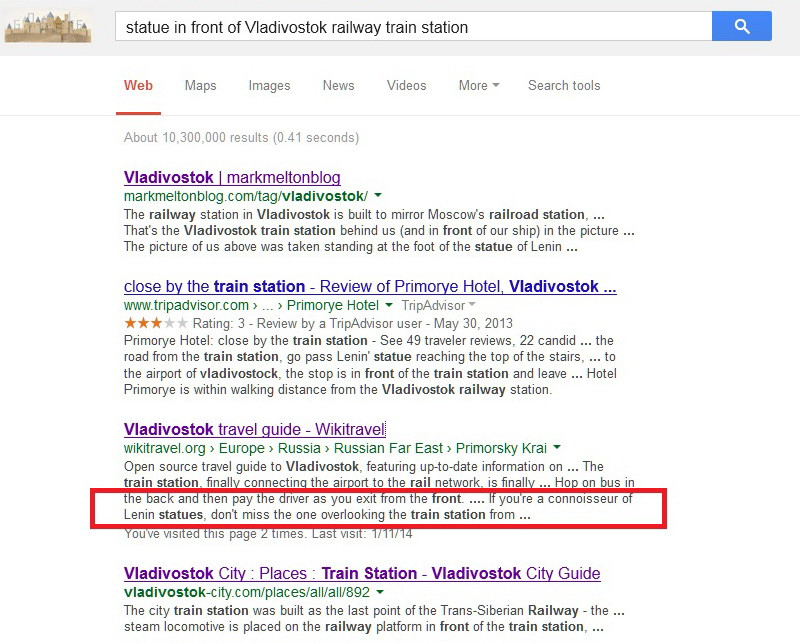 Moreover, by typing "statue in front of Vladivostok railway train station" into Google, the preview still shows the same sentence. I'm now not dancing up and down, but scrolling up and down Wikitravel. Curious.

Whatsoever, back to food. Next to the statue of Lenin across Vladivostok Railway Station, there's a supermarket. It's more than a minimarket. All your daily needs can be met here, as long as you have enough roubles. Aha. And, there's lots of food there. Had I known, I wouldn't have bought so much bread just now. Well... let's consider that an honest gentleman's luck. 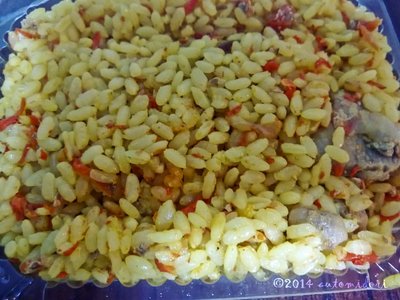 Yellow rice. Nasi kuning! My Indonesian eyes widened. The taste was only slightly close, though. Except for the meat that was rather hard, it was nice. 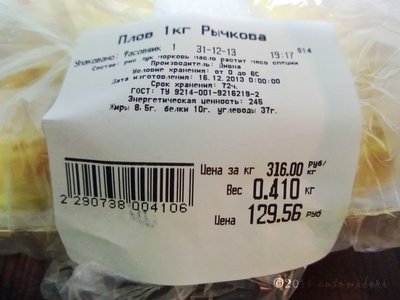 More interestingly to me is the way it's sold. Besides this yellow rice, there are various other dishes of meat and vegetables, each placed in an aluminum basin. On top of the shelve there are 3 sizes of plastic boxes: small, medium, and large. You tell the waiter which size you want. In my case, I just pointed to the smallest box. The waiter then fills in the box. I thought, each box had a fixed price. Therefore, when the waiter asked me whether I wanted more -- the tray of rice was almost empty -- I nodded excitedly. I thought she meant that the rest would be too little to sell out anyway. She pressed the rice in, harder, and then had some difficulty tightening the box. How lucky I am, I thought.

Oh no! It turned out that the box would be weighed and that's when the price is fixed; exactly like buying fruits in Indonesia's grocery stores. No need to tell you I struggled finishing it plus another box of grilled beef. 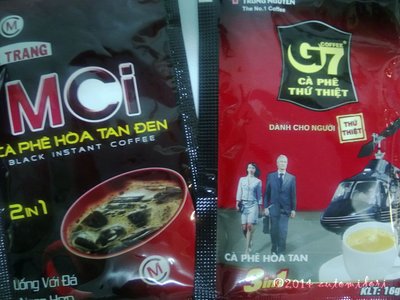 By the way, at the same supermarket, I found these. Vietnamese coffeeeee!!! How can you be here? A slight envy crept inside my heart. Why can't Indonesian coffee be this outgoing? I've seen Vietnamese coffee in Urumqi, in Istanbul, and now in Vladivostok. On the other hand, in Indonesia, I cannot get Vietnamese coffee this easy. So close, yet so far. Ah... maybe Vietnam is in Europe.