A One Million Show

In the end, I thanked Aeroflot because when I was already in Harbin, Aeroflot emailed me notifying that my flight has been rescheduled to January 5th at a given time, leaving me with zero option. Luckily January 4th wasn't my last day in my itinerary in Russia. Luckily I wasn't planning to return to China from Khabarovsk. Luckily I still could add one more night to my reservation in Yunkhe Hotel. Luckily I could cancel one night from Zemchuzhina Hotel without being fined. Luckily... Aeroflot rearranged my itinerary for Khabarovsk turned out to be a number times interesting than what I had expected. If Aeroflot hadn't done so, I would have missed the very thing I had come to Khabarovsk for: Circus.

I was also lucky that on my first morning (Jan 3rd) in Yunkhe Hotel, the front desk staff could, and was willing, to speak English. Had I arrived in Khabarovsk a day later or a day after, I'm almost certain these last posts in this blog would be entirely a different story. The next day and the next day, I never met this sweet lady again. She did all her best to search in the internet about the places of my interest. When she had difficulty to express the words in English, she would copy the words from Google on a piece of paper and give it to me. She told me in detail which to take and which bus stop to get on. She wrote the place's name on a piece of paper for me to give to the bus attendant.

As a simple token of gratitude, I gave her my handmade freeze-magnet. "I took this picture myself. This is my country. And I made this myself. It's for you. Spasibo."

"For me?? Me? Spasibo! Spasibo!" Literally she jumped up and down like a little girl.

I felt like I didn't deserved to be thanked for in such a way. "Spasibo." I meant to say, it's me who thanks you.

Her respond made me feel worse. She stopped jumping and looked at me. "Uhmmm... spasibo. Spasibo means... thank you very much."

"That's right. Spasibo! Spasibo!" She held my little handwork to her chest.

Even after spending more than half an hour with me, alone, at her desk, she doesn't regard that she has done something for me that deserves to be rewarded??

Following the instruction of this angelic front desk staff and guided by the lady bus attendant, I arrived at Gagarin Park for the second time. Last night I got here by tram, unintentionally. 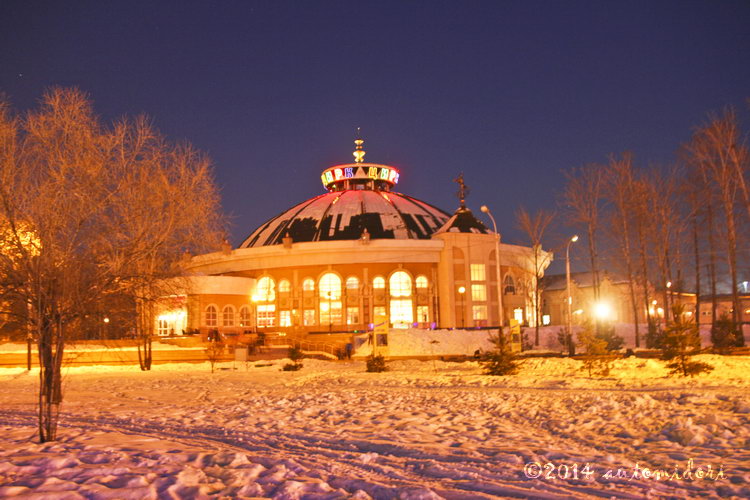 I was correct, this is the building where the circus plays. 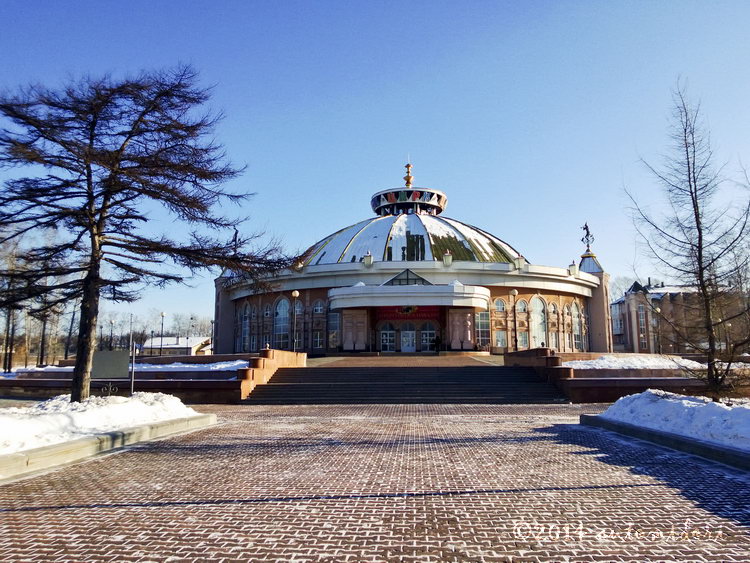 And today, from another side, it's like this. Snow has been cleared off the stairway. It was interesting when I saw some men clearing off ice snow from the road across Gagarin Park. In China I used to see people shove the ice. Here, they chop the ice. After the ice crack into pieces, they just push the cracks aside. 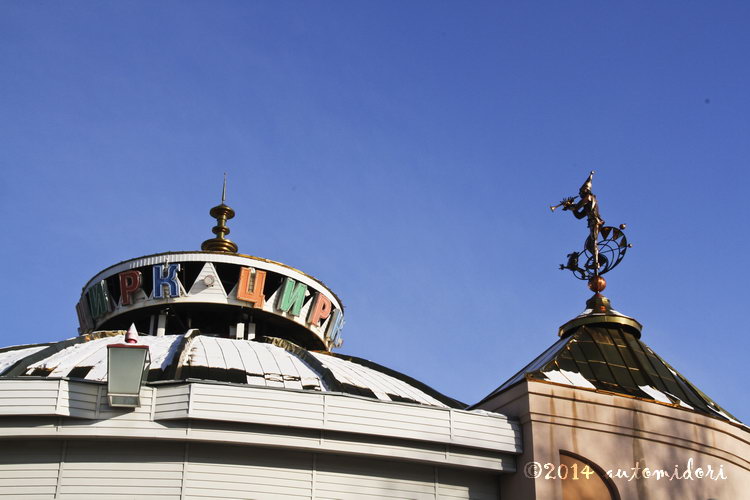 Allow me some details.

The show was at 4:00 PM, but I purposely came in the morning just to make sure of the place. I didn't want to miss the show just because of having troubling searching for the right place. And... luckily I did so. It turned out that the tickets had to be booked in advance. How did I know? On the right side of the building, I saw an opened door. I entered. There, was the ticket office. People were queuing for tickets. How could I know they were buying circus tickets? 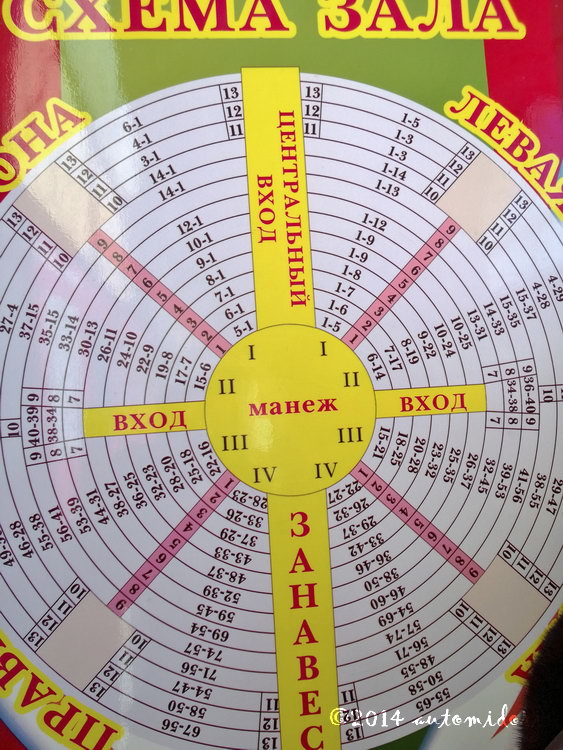 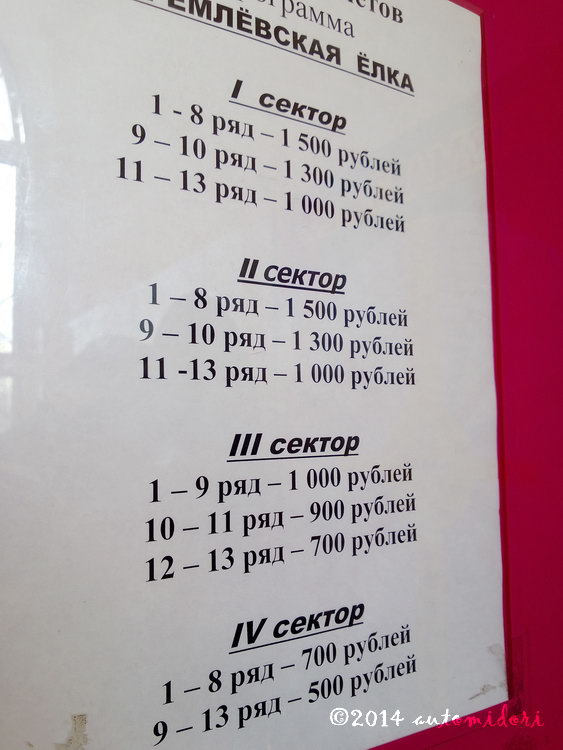 Because I saw these on the wall.

I related these two and opted for the 1000 roubles seat, two rows from the front. Hmmm, luckily my angelic front desk friend had informed me that the ticket cost 1000 to 1500 roubles. Otherwise, I would have fainted here, behind the ticket counter. Wikitravel said the ticket was only 60 roubles! That's not even close!!

I took a picture of the seat layout with my Lumia, zoomed-in the photo, and then brought it with me to the ticket lady. I pointed out to her the seat I wanted. Patiently and seriously, she took a look. But, "Houskvousk rousk vousk," she said while turning her screen forty five degrees towards my view. There was a big layout on her screen. Ah, that's much easier to look at! "Houskvousk rousk vousk," again she said while pointing on two yellow spots which were on the second row from front also. All the other front seats were reddd, presumably: reserved.

"Fine. That will do." I nodded repeatedly to ensure here that I wanted that yellow seat.

"Houskvousk rousk vousk." She typed on a calculator and showed it to me. It was written there: '1500'. But I was too happy I got a ticket for the front seat. 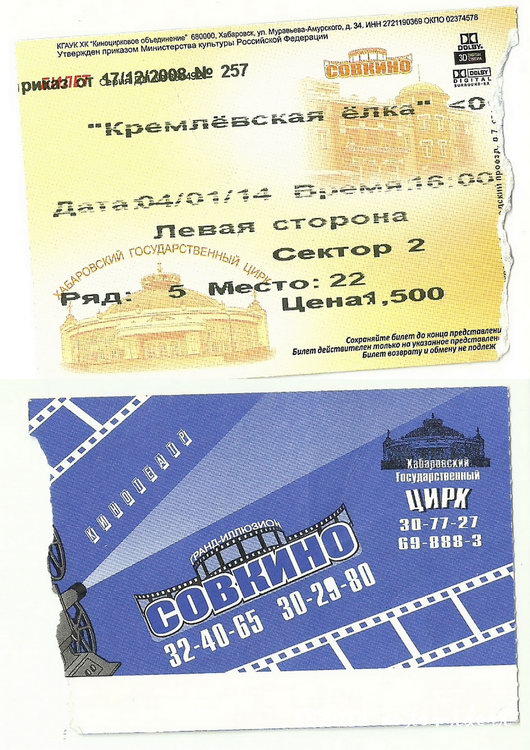 This is the ticket, but after it was torn at the entrance gate. "Wait... 1500?" as if I had just woken up from a dream. "Why 1500? Didn't I set aside in mind 1000 on the account of not being extravagant but also not forfeiting such a rare opportunity?" 1500? I read my ticket once more. I barely can recall now what I had typed on my calculator. Whatsoever, the result was that 1500 roubles equaled one million something rupiah. [It should have been half a million approximately.] Thus, I was terrified -- but not regretting. Watching a Russian circus was really what I wanted.

Then came the toilet call. Thinking that in such a big building there ought to be a toilet (for public), I entered the main door. A man in an army-like green uniform was standing there. His look said: "What are you doing here??"

"Excuse me. Which way is to the toilet?"

"You mean there is a toilet over there?"

I followed the path block to the right. Then I saw a sign written in Cyrillic but resembled the word 'toilet'. I must be on the right path, I thought.

Now, where's the sign "Ladies", "Gents"? I walked around the little building and found nothing but a lo0se door. I pushed the wracked door a few centimeters forward. Ooops!! This mustn't be!! Hurriedly I retrieved to the circus building.

But as I neared to the circus building, a girl wearing seemingly a school uniform, came walking my way. Where's she heading to? To that hut of wrack?? What is she going to do there?? She doesn't look like a caretaker or the like. Is that, actually the toilet?? If so... where would one do... uhm... I stood still and watched this girl. She turned around the small building to where that wracked door was. Then... I waited. She disappeared! So?? Is that, the toilet??

I walked back, and pushed the door further aside while preparing myself for the worst of worse. Certainly, as mentioned by my Japanese friend, it's worse than China, I reminded myself. I walked through the door bearing goosebumps. There was no toilet and no girl. Rather dark. I walked to the left following the sound of music streaming from an old radio. There was a lady sitting there. I peeped to behind the wall... and gasped!

It was bright and white. And... that schoolgirl came out like Jack from the box but from the side not top.

Because there was a big sign "15", I gave the radio lady 15 roubles. She gave me in return a few sheets of brownish rough toilet paper. In conclusion, the toilet was much cleaner than many public toilets in China. 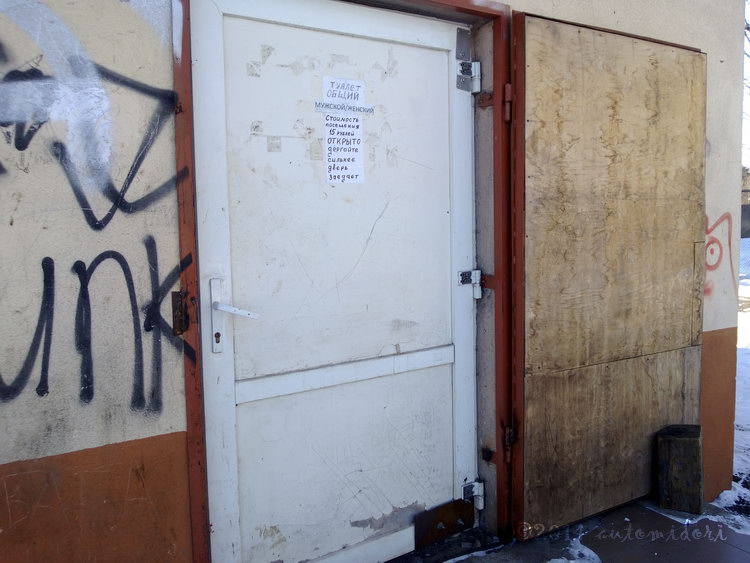 Here's that door. I was too stunned at the appearance of this door that didn't realize the small letters "туалет". Could I be more wrong to be confused?? And then I pushed the door opened... 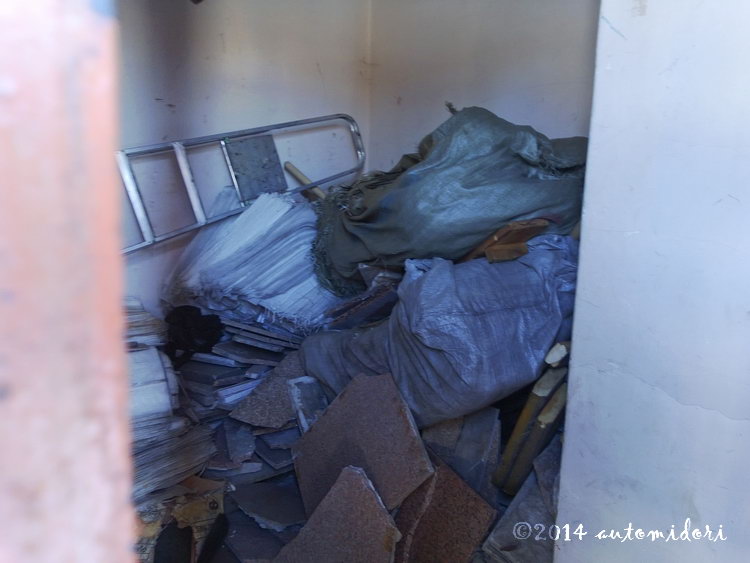 It looked like this!! The worst of the worse toilets in China has no door but a hole. It's disgusting but clear, where and how, to do the business. But this one?? And then walking to the left, behind this wall, is that bright and white toilet semi-sparkling. 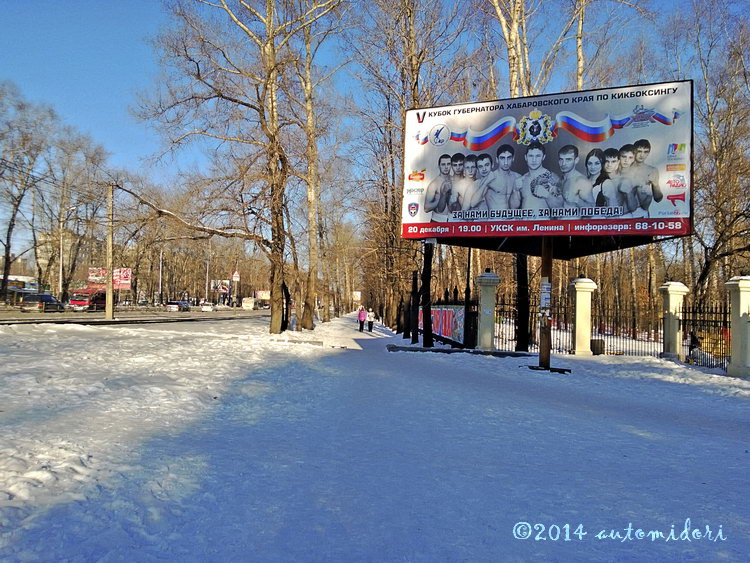 Here's the roadside in front of Gagarin Park. On the right there is Gagarin Park. Can you see those two people in pink and white? Can you imagine how I love streets like this where the pedestrian road is broad and comfortable even under a blanket of snow? Much more it would be in summer when the green shades hover above! Can you see why I love Russia?