The more I learn about Amur, the more thrilled I am.

Amur. I had heard that a year ago. My first itinerary was to cross into Russia from China through Amur River which would be from Heihe to Blagoveschensk -- what a difficult name! The night shots of Amur Riverside on Blagoveschensk with China at the background suggested amour to me. You know, that amour of Romance d'Amour. It turned out, however, Amur the River had nothing to do with Romance d'Amour. Aha.

Not until I began to prepare for this post did I realized that Hēilóng Jiāng 黑龙江 is the Chinese name for Amur. I felt silly about that, because I had been traveling Heilongjiang and staying at her capital city, Harbin, while looking forward to Amur but did not know I was actually walking on it. According to Wikipedia, Amur is a Mongolian name meaning "rest". But the Manchus named it "Sahaliyan Ula" meaning "Black River", because this river was regarded sacred. In another Mongolian name, it is also "Хар мөрөн Khar mörön" meaning "Black River". And then the Chinese -- actually the Manchus, I suppose -- added a 'dragon' to the river, making it "Black Dragon River", literally translation for Heilongjiang. Hence, quoting from Wikipedia, the Chinese province of Heilongjiang on the south bank of the river is named after it, as is the Russian Amur Oblast on the north bank.

Amur is the world's tenth longest river, forming the border between the Russian Far East and Northeastern China (Inner Manchuria), and this... is just part of it. Look at the green circle: Russia China. That's the border line. Look at the blue circles: Heilongjiang. The river's name in Chinese. Look at the pink circles: Amur. The river's name in Russian. Lastly, that red circle on the right. That's Khabarovsk where we are now. It would take too much time if I explain to you why I had turn from Blagoveschensk to Khabarovsk. And if I tell you that's because Blagoveschensk is more difficult for me to type -- I copy paste every time! -- you wouldn't believe me either, would you? 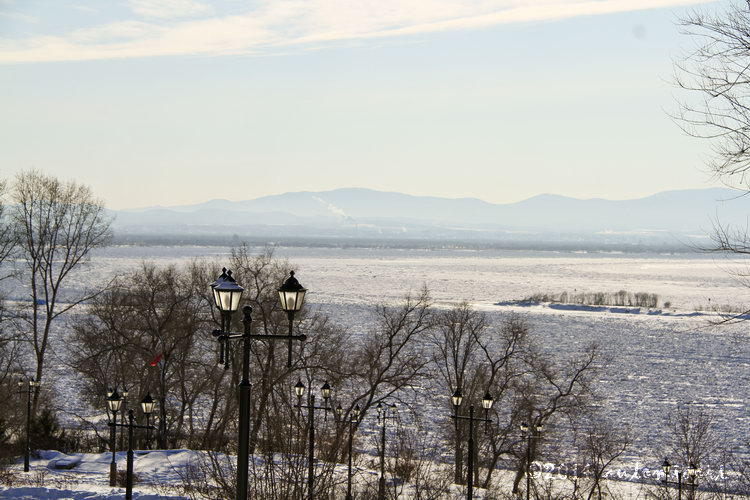 Here is it, the totally frozen riverside of Amur on Khabarovsk's side. At first I thought those mountains were China. No. By checking on the map, for sure I'm not standing facing China. China would be straight and then to the left side. Here's to be more certain: 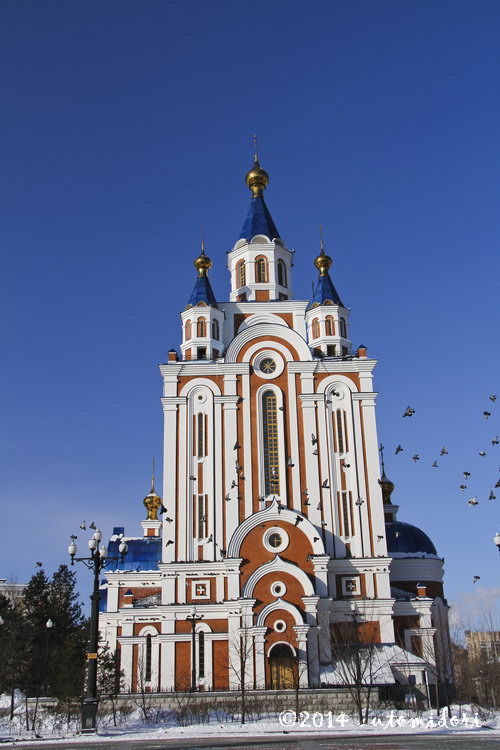 Right across Amur Promenade is Dormition Cathedral. In some articles, it's also mentioned as Grado Uspensky Cathedral of Khabarovsk.

Now, Dormition Cathedral on this map is on the yellow circle with a star in the middle. Find it? That's where we are standing now. 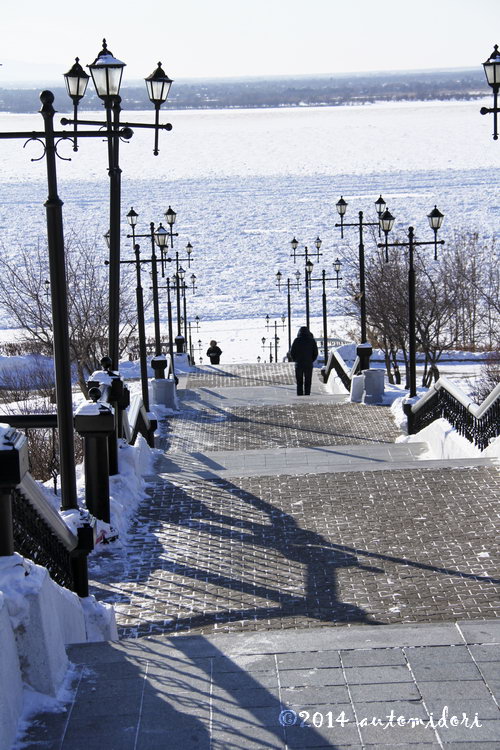 In summer, people would flock down to enjoy a beach relaxation, although one has to be careful because the river current can be very strong, I once read. So strong it is, that one would hardly believe he is not standing by a seashore. 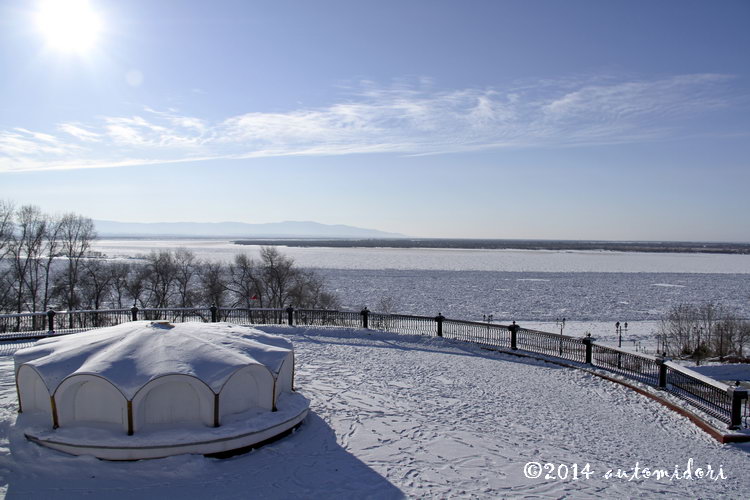 It was about 3:00 PM at that time. If you relate to the map and the position of the sun in this photo, you can figure out on which side China is.

So far, no other river has ever fascinated me as Amur River does. The more I learn about Amur, the more thrilled I am. It's like my trip has yet to end.

P.S.
Thanks to HERE Maps who through Lumia showed me the way up to here.