To pay a debt.

My airport shuttle bus ended at Vladivostok Railway Station which was within a walking distance to my hotel, Zemchuzhina. I congratulated myself for being smart. "See!" I said to myself. "I'm not like those backpackers who are so hostel minded, who brag how little they have spent but don't care how much time has been wasted. Money you can earn, time you cannot. See?"

As it wasn't 12 o'clock yet, I wasn't allowed to check into my room. No problem. I finished the checking in procedure and headed off. In Russia apparently, they verify the visa and that little white piece of paper from the immigration officer. Hah, luckily I didn't throw that away.

Today, I have a big mission. That is, going to Primorye ATP's office to pay my debt. Aha. You know, I haven't paid my fare for the bus from Pogranichny to Vladivostok. Just to make matters clear, weeks prior to my departure to China, Primorye ATP had told me via email that I should pay the fare later at their office in Vladivostok on January 4th or 5th. I told them that I would be in Khabarovsk before that, and of course their office would be close on December 31st and January 1st. Regardless of having been instructed so, as you have read in my post about my bus ride from China to Russia, I did attempt to pay the driver, but he just left. I'm being detailed here, because I don't wish anyone carry a misunderstanding that I didn't pay the driver like when I told the story of my arrival in Khabarovsk. 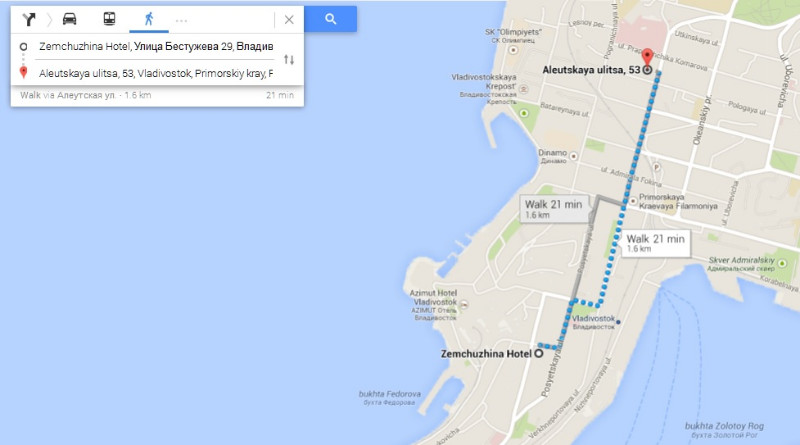 Also prior to my departure to China, I confirmed with Primorye ATP whether I had got the location of their office correctly on Google Maps. That's right, said the reply. Hence, I was happy. Look at the map! See? Aleutskaya Street is just 'next to' my hotel. Yay! Again, I congratulated myself. 1.6 km? Well, I'm a tough hiker -- I thought! Where was that? Uhm, it was 2 km, wasn't it?

In high spirits, I followed the map to Aleutskaya Street. Now, if photographers can make women look 10 years younger a.k.a. wrinkle free, Google Maps can make paths wrinkle free as well. I mean, what looks 'just straight' on Google Maps isn't certainly straight in reality. Actually, the day before I left for Birobidzhan, I had been strolling on Aleutskaya Street already. However, I was walking just for the sake of my happy feet. I didn't care much about street names. The worse part is, I have bad sense of direction. So when it took me some time just to get walking on Aleutskaya Street, I had to admit to myself that I'm actually not as smart as I think I am.

Google Maps make paths look straight in direction, but also on surface. 1.6 km of walking might be easy for my happy feet, on an account the road is flat. Google Maps never specify whether uphill, or downhill, much less "Be careful, slippery ice!" As photographers make everyone look young, Google Maps make every journey look smooth. Number 11... number 15... over there is number 10. Up, up, up... That's number 16. So the odd numbers are on the left. Great. I don't need to cross the street. Up, up, up... What?? It's still number 23?? After this far??

Number 27... number...? Still 27!?? Oh my! Not only the road surface had I missed to take into account, the length of the building, too! How can such a huge building (in length not in height) be of one number only?? How greedy.

Admiral Fokin Street. Wow, it's entirely different today. But oh bother. I have to get my ticket for Harbin, otherwise I won't be able to fly back home. Of course if a Russian angel would grant me a home and a job, that would be a different story. Up, up, up...

I wasn't congratulating myself anymore. I was blaming myself. Had I not been overconfident plus arrogant, I could have asked the front desk staff at the hotel what bus to take to Primorye ATP's office. I could have asked her to write for me on a piece of paper like when I was in Khabarovsk. It would have been easier with this staff, because she spoke excellent English.

I tracked down the road until number... 51. Where's number 53?? Like an iron, my countrymen use to joke, I went up and down back and forth.

I went through this arc, and.. the view behind, was to me, movie-like. Don't ask me what movie that was. Western movie, for sure. I pictured a woman with an apron standing on that mini balcony waving her hand to me. "Hey! Would you like to join me for tea?"

That was fantasy. The reality was, there was a big sign on the wall which I'm sure Google Translate would say that's "ATP Primorye". Nevertheless, everything was still, doors were shut. It's Sunday anyway. But... but... the email said the manager's office will be opened 2-8 January from 10:00 to 17:00. Oh please...

I tried to push the handle open. It stayed firmed. By the door, there was a button, which looked 'pressable'. Press. "Push!" said a voice inside me. I pushed. The handle moved, the door opened. Yeah... now I believe this is, an office.

I handed him the letter from Primorye ATP's director. "I was told to go here. Is it right?"

"Do you mean I should bring this letter to the office downstairs?"

The door downstairs was exactly the same. The button, too. Press. Push. I opened the door like a local. Aye. But the door, you know, was very heavy. Somewhat like a safe's door.

There sat a lady with reading glasses busy on her computer.

"Excuse me. I'm Sonja from Indonesia." I laid the director's letter on her desk.

Seriously, I thought I was in trouble. "I'm sorry. I don't understand. Do you speak English?"

"Houskvousk rousk vousk!" Now she pointed on a word on the director's letter. That must be "December" because there's "31" in front of it. December 31st is the date of my travel from Suifenhe to Vladivostok. Next, she wrote down a sum of money on a piece of paper.

"But I also want to buy a ticket for Harbin for tomorrow morning."

Suddenly I trembled. Do I bring enough cash?? I hadn't exchange anymore money since that time at Primorye Hotel. I forgot that the bus fare would be quite a sum of money. I could have made sure beforehand, because I have been told how much the bus fare would be. But, I was just overconfident, thinking I was smart. Now if I tell this lady that I need to go to the money changer first... hahhh... I dread to imagine the third octave. "Houskvoooousk roooousk vouskkkk!!!!!" She already seemed (to me) unhappy about my unpaid fair on December 31st.

Luckily her phone rang. Her phone rang on and off many times actually. The picture of a lady inviting me for tea faded away. While she answered the phone, I counted the sheets in my purse. One, two, ... enough!!

While she was writing me a reservation ticket, her phone rang again. What a Sunday this is for her! Sooo busy. And suddenly I regretted once more for another thing. Why didn't I prepare for her the Indonesian tea-bags I had brought along? It could be a token of gratitude.

"It's with you in your backpack," said a voice in my heart.

By the next phone call, I poked into my backpack. Yeah!! It is! I had put them there, because Andrey told me to prepare a cup in case fellow passengers in the train invite me to share some tea. So I thought, it would be nice if I could share my tea with them, too. Andrey said, Russians love tea. Thus, these Sosro Green Tea-bags have been tagging along all the way to Birobidzhan, Khabarovsk, and now back to Vladivostok, inside my backpack.

The manager turned the paper she had written to my side. "Houskvousk rousk vousk." She pointed on the paper.

Oh no! I slapped my forehead. What is she saying now??

You know what? She laughed and imitated slapping her own forehead. "Hahahaha!! Houskvousk rousk vousk!" Pluk!

My mouth must have been half opened. She is laughing??

Then she pressed her pointing finger under a certain word on the paper. I was about to say, "Press on anything. How on earth would I understand any of those??" But I brought myself to take a closer look, at her finger. Ah... it looks like an address. There's that "ul." something.

I became hesitant to give my tea and my handmade freeze-magnet to her. I was afraid it would undervalue her. The people here are rich and she must be of high rank, I thought. What's tea and a stupid freeze magnet to her? So I got up my chair and thanked her. She smiled and didn't look mad anymore.

But before I reached the outer door, a strong feeling held me back. "Give them to her."

"These are for you. Thank you so much for your help. This is Indonesian green tea. Cha." Andrey had taught me that "tea" in Russian is pronounced the same as in Chinese.

At the door, I turned my head to her. She was rubbing her finger on my freeze-magnet. Never in my life I have seen someone doing that on my piece of work. Never.

As I walked downhill on Aleutskaya Street, tears rolled down my face. I don't understand why she had seemed mad, just as I didn't understand the tensed conversation between mother, daughter, and grandson, in the train on my way to Birobidzhan. If you have read that story, you can see how my experience with this manager of Primorye ATP is so much alike. Here's a nation I can't fully understand. I only understand the end. But the end has always been something moving; Something I would never forget my whole life. Spasibooo, spasibooo...!

Great post! Really enjoyed this and can empathise with your story.

Thanks, Kellie. How proud am I to get a comment from you!

You're welcome, of course! Always enjoy reading your posts.

Glad to hear that