through the bus together with Lumia.

From Vladivostok to Harbin, January 6th 2014

The bus wasn't crowded at all. So in my private corner, I started my day, as the previous had been just a happy-ending-nightmare. I pulled my hat off, combed my hair, and put moisturizing cream on my face before I loose the ability to smile due to frozen cheeks. Then came breakfast. I untied my lunch-plastic-bag and began sampling the breads I bought at the supermarket across the railway station. 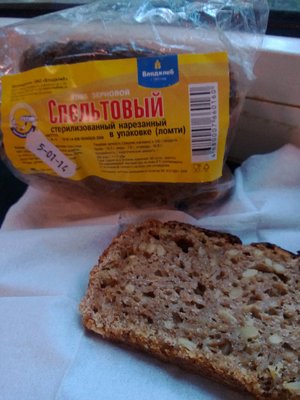 One of the samplings was this: Onbitjkoek, Mom's favorite. I'm not sure whether it's meant the same onbitjkoek or not. Except that this one is less sweet than the ones in my home country, for me it's similar.

Breakfast, especially during travels, should be with milk. I finished the last carton of Ultra Milk and left the Russian milk for Harbin. It was a big carton box which I couldn't drink at once. Maybe because Russians are big, they don't produce carton milk in small sizes. 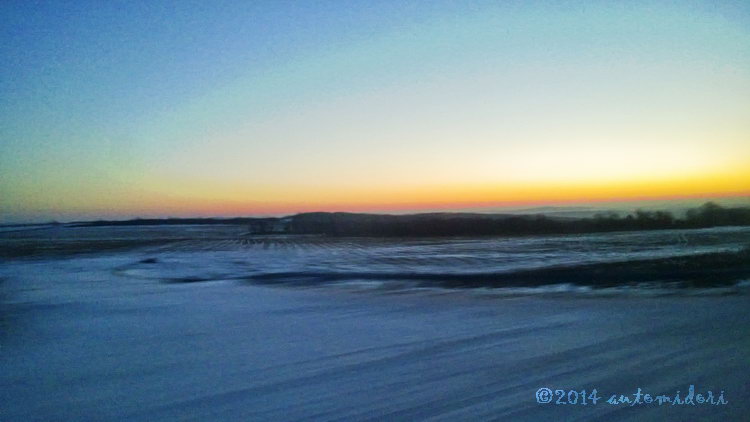 With breakfast done, morning broke. According to the GPS data, it's Lipovtsy here. 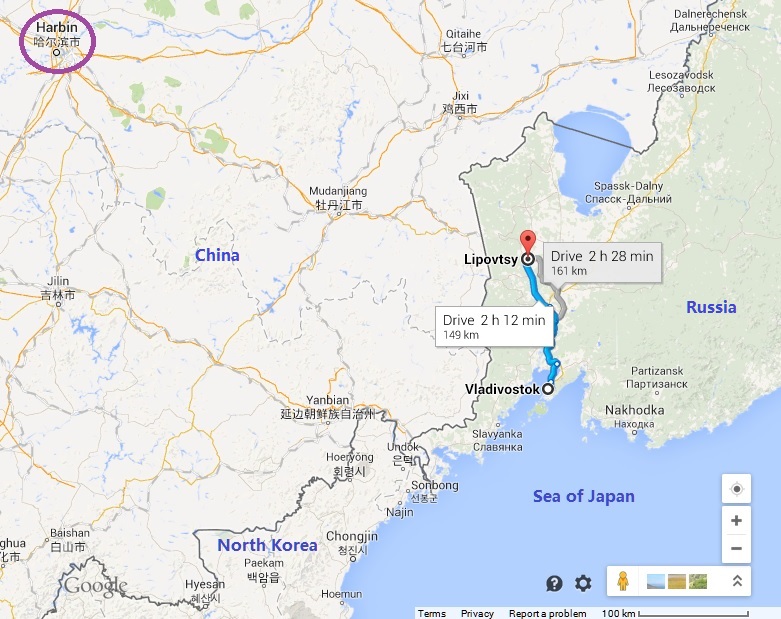 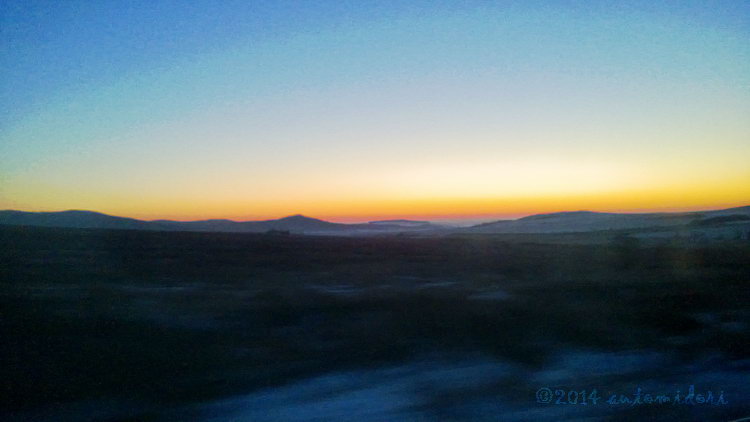 This, has always been the best times of traveling: the antonym of "twilight". What's that? I can't find out the word. "Daybreak"? No. Not that in particular. I'm emphasizing on the light. 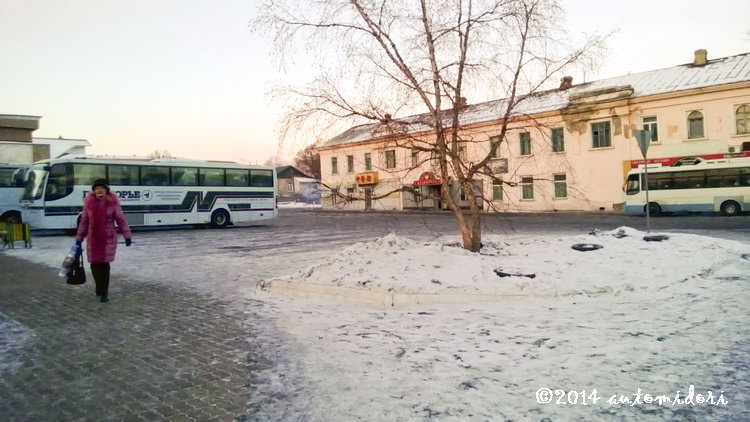 Finally... no, not in Harbin yet. It's Pogranichny, the city border with China. Yeah, that's my bus. Let me give you a closer look. 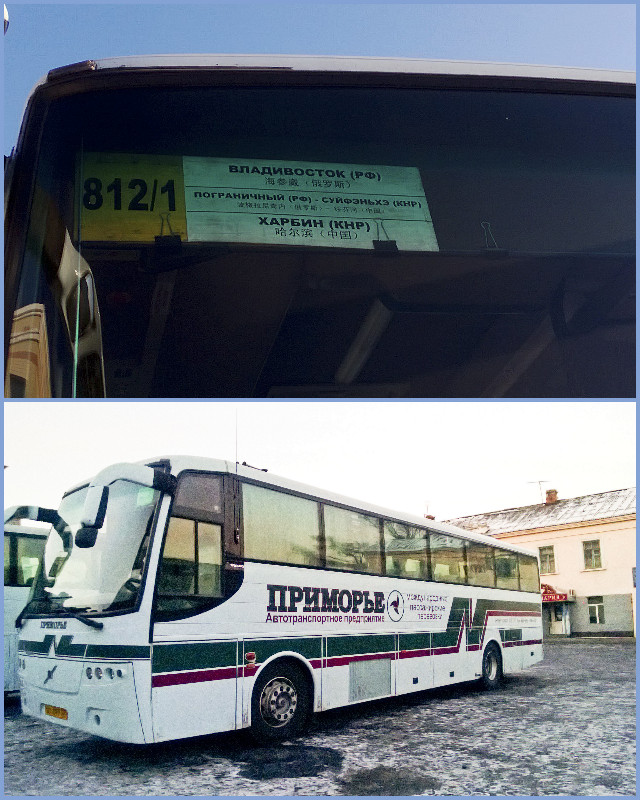 That's it: Vladivostok - Harbin. Only one thing I don't like about this kind of buses. In the inside, there's no handle on the door. So when the driver gets off and leave the door closed, you cannot get out. It kind of terrified me when I noticed that at a rest area. The driver and other passengers had got off. On the bus were only me and 2 Russian ladies. Then I thought I'd better go to the rest room now. So did one of the Russian ladies. To our surprise, we couldn't open the door. On the outside, there's no handle either. A fellow passenger, who was smoking outside, wanted to open the door for us, but couldn't either. I tapped the glass window, honked many times, no one took notice although there were other buses outside. People just walked by and by. What if something serious happens on the bus? We won't be able to escape...

I can't figure out at what circumstance the bus door should be shut and on what condition the bus door can be left opened. At the next stop, I hurriedly got off when the driver got off. It turned out he left the door opened the whole time. The next time he got off and shut the door closed.

It's not only Primorye ATP's bus which locking system is like this. The airport shuttle bus I took from Vladivostok Airport to Vladivostok Railway Station was alike. 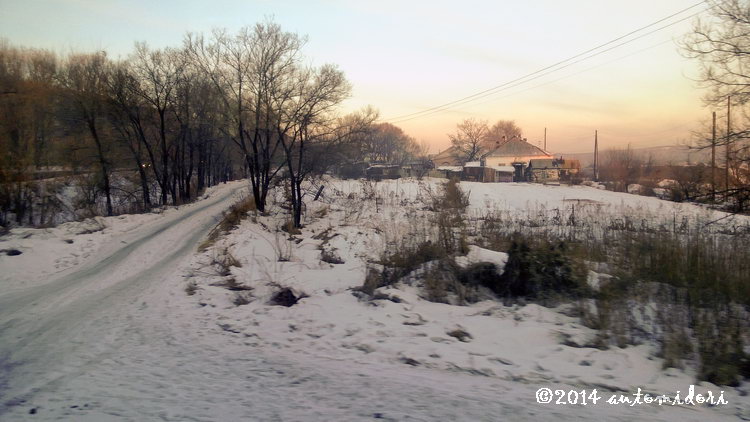 The beauty of traveling Eastwards is that the sun stays put on the horizon. This has been my longest sunrise experience. Oh yeah, this picture was taken from my window seat, a few minutes after leaving Pogranichny Bus Terminal. 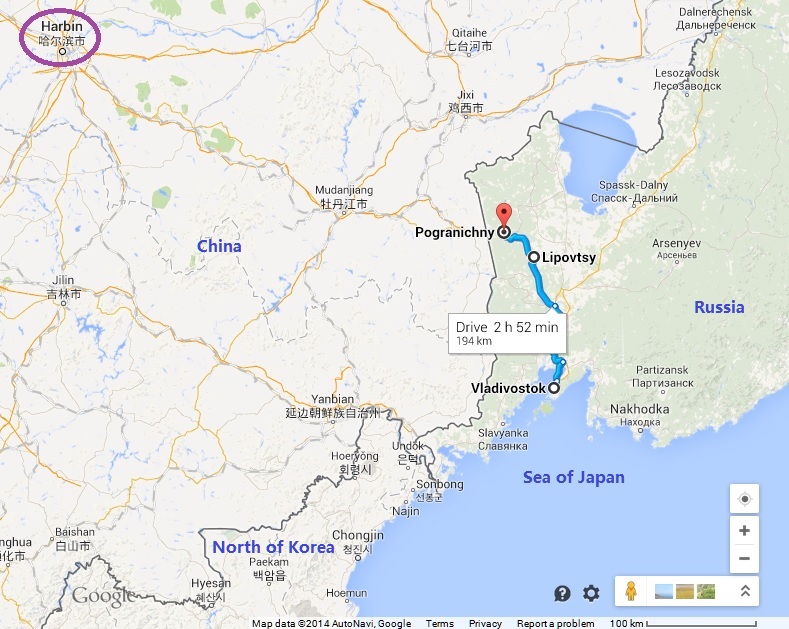 That's Pogranichny. We are coming closer to China. 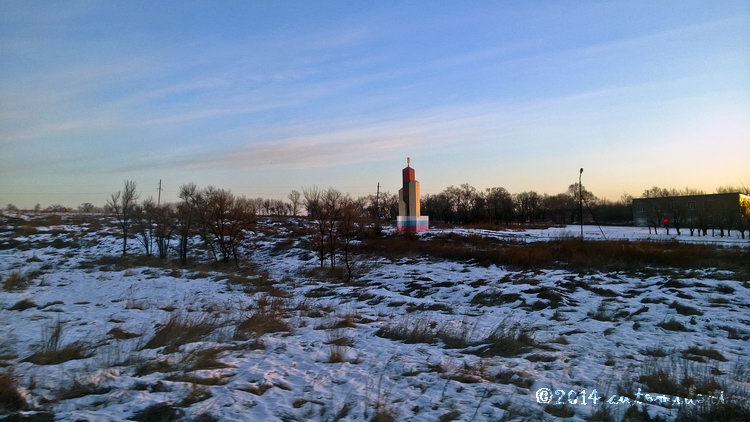 There, the white-blue-red stripes, I think marks the border of Russia. 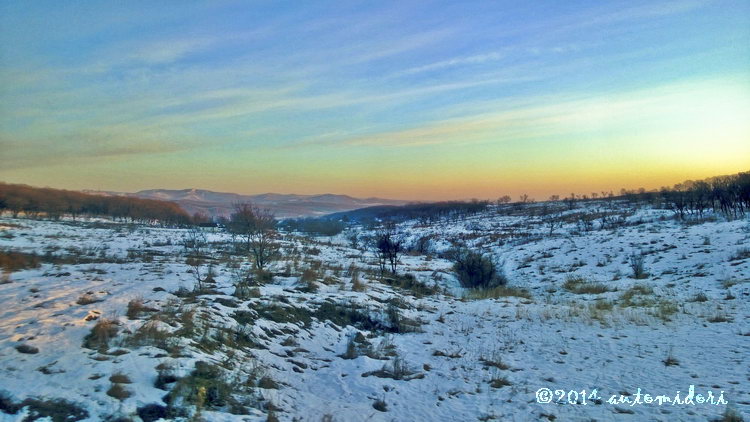 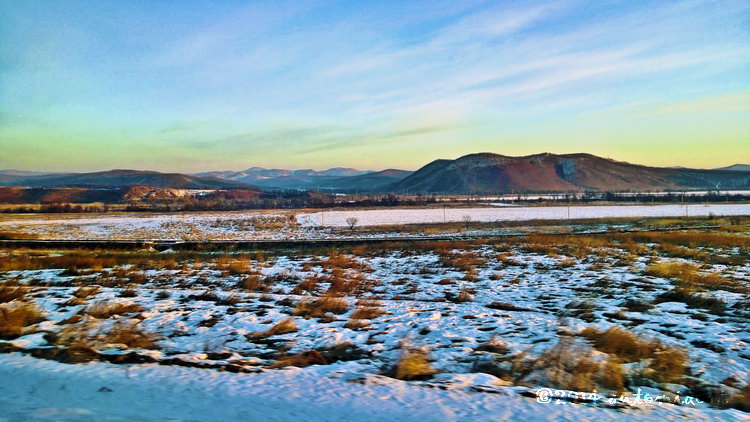 ... mountain desert. I wonder if this is part of the desert mountains I had seen from the plane from Khabarovsk to Vladivostok. 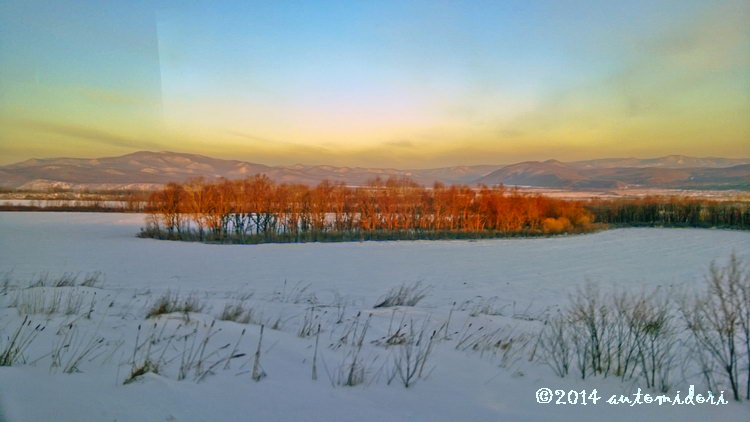 When you take a bus crossing the border Pogranichny (even from Vladivostok) - Suifenhe (up to Mudanjiang), fine a seat on the right side. And, in winter. Without the white carpet beneath, I guess the scene would be less impressive. 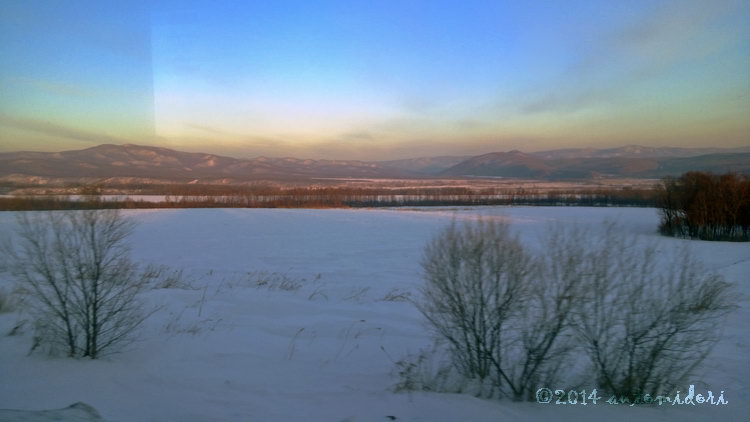 For as long as I can remember, I have always been thrilled by the sea, either standing by the seashore or on a deck of a boat. However, since my first Silk Road journey, it was the desert that never ceased to make me gasped at its vastness -- under the sun and under the snow.

At the immigration office on China's side, I was treated a VIP -- by the Russians. Our bus driver had me stand in front of the queue for foreigner's check in. Even to those who weren't fellow passengers of same bus, my driver asked them to step back and give way for me. Feeling uneasy, I hesitated. But my driver insisted.

Same thing happened during my coming from China to Russia. That time the immigration office wasn't opened yet when we came. It took quite awhile. The Russians chatted among themselves and while doing so, one of them probably had forgotten what our driver had ordered them. When the immigration officers showed up, this Russian turned back to the immigration counter and stood right behind the line, being the first. Her friend pulled her hand, "Houskvousk rousk vousk!' and then pointed to me. Poor fellow, her expression was like "Ooops!" Immediately she stepped back, giving space for me to stand behind the line.

This time the Chinese immigration officer didn't ask me what my Russian name was. I had been excited to tell them to call me Sonja, though. 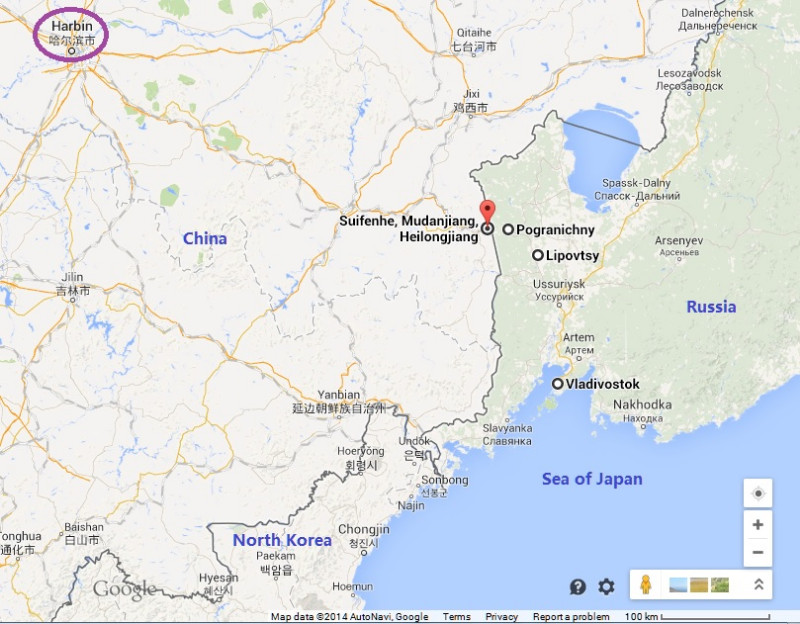 Welcome to China! Ahahaha, Google Map cannot draw a path line crossing an international border. The city of Mudanjiang itself is somewhat a hundred fifty kilometers away from Suifenhe. 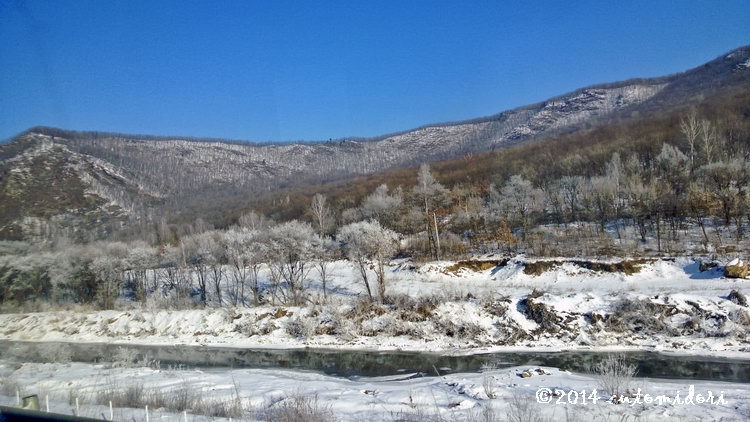 Why is it that everytime I cross the Chinese border into China, I immediately feel a strong different atmosphere? Is it just me? 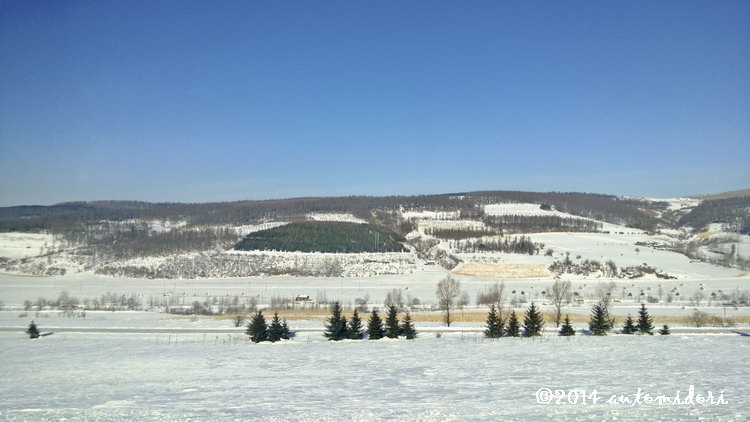 Mudanjiang, but not the city. 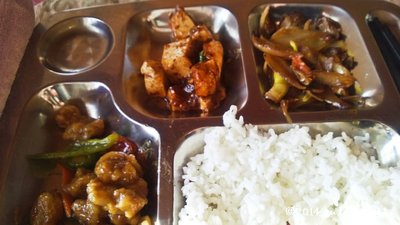 We had lunch in Yabuli, which is famous for its ski resort. 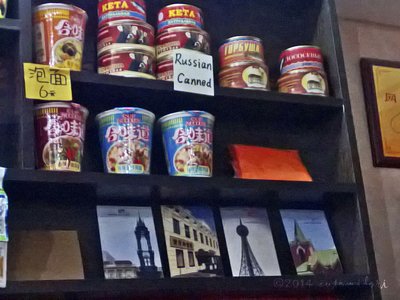 Finally, Harbin, I'm back. Although Russia is now far behind me, in a hostel named "Russia Harbin Youth Hostel" there's still something Russian: canned food. 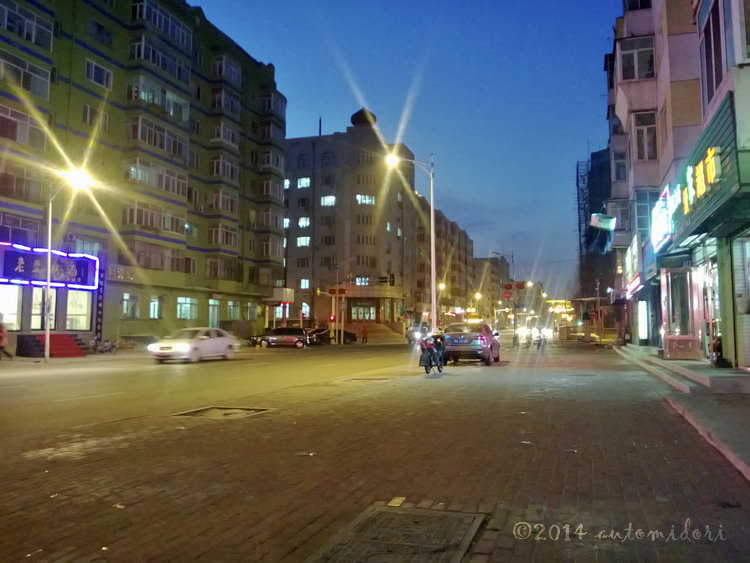 From China with love, to Russia, good night, dear friends!