It's Sonja's second trip in Russia!!

From Urumqi (China) I flew to Novosibirsk. How I wished I could cross the border overland. No way. Literally, no way. 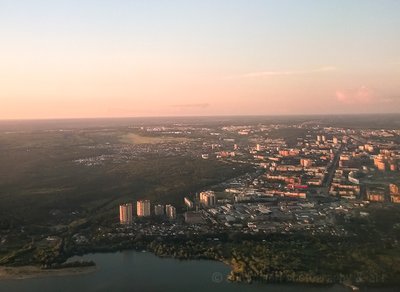 For me, Russia rolled a red carpet in the sky. Welcome back, Sonja!

Now, it's your task to tell which photo came out from a Canon and which from a Nokia. Aha. I had made both busy. 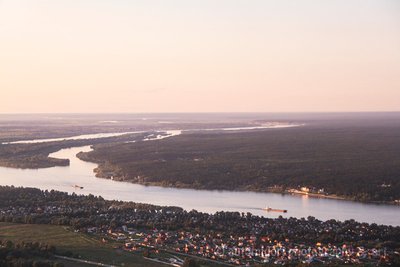 Here's Ob River that runs through Novosibirsk. Uhm... there's no sign on it, but I'm sure it is. 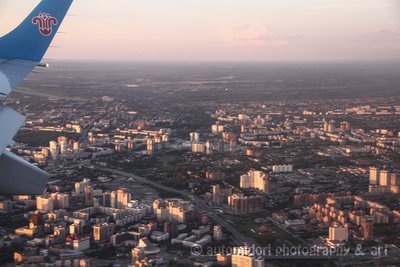 When I saw this, I wasn't sure whether to think about food or shopping. 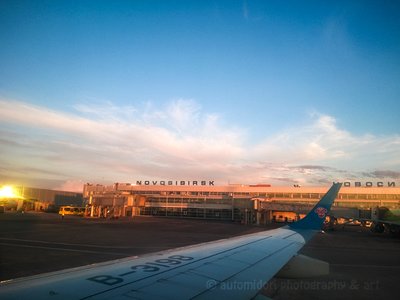 Here I am, geographically on Russia. 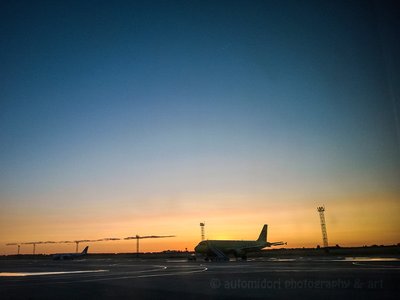 From the aircraft I boarded a shuttle bus. I was thrilled by both: by Russia, and by sunset. 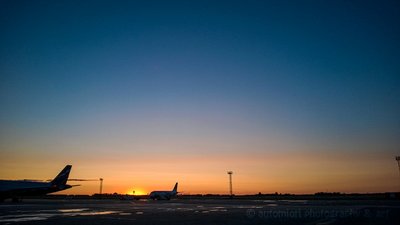 Ooops! I missed it right when the sun was lying on the horizon, unblocked. Anyway... that's it.

There was a long queue at the immigration. Once again, it seemed that I was the only one who was non-Russian and non-Chinese. Everyone was speaking either one of those 2 languages. And this time there was no one inviting me, the foreigner, to stand at the front line. Nevertheless, the screening of my documents took twice faster than my previous border crossing. Maybe people who board a plane are considered more trustworthy than those who cross borders on buses or trains.

And then there was another queue for having our luggage go under the scanning machine. Phew! The Chinese, when abroad they do as in mainland. Queuing is just a word. If you can fit yourself between 'u', why forsake the opportunity? And when they do so, they push 'u' to 'i' so they can squeeze in their carton boxes. Thanks goodness no one spitted on the floor.

Outside that luggage screening room, there was nothing more than an exit gate. I searched for a money changer which (I thought) use to be in (any) airports of big cities. None. 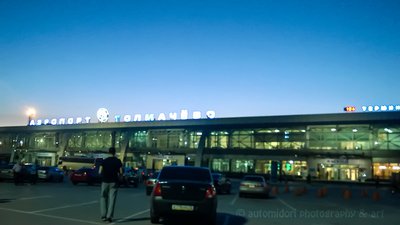 The next building which said the departure hall, seemed grander and more promising. Snacks, coffee, cash machine... yes. No money changer. Okay, there are two taxi box offices over there. There will surely be a money changer near my hostel later. Just 'get home' first, I told myself. It was 10:30 PM already. While in China I had already learned not to be deceived by summer daylight.

Instinctively, I approached the box office on the left. "Excuse me, I need a taxi to go here." I gave the lady a piece of paper with the address of my hostel written there. She made a call, a guy showed up, she talked to him, and then turned to me, "One thousand one hundred."

I was like, "What did you say??!!??" The highest taxi fare I ever paid during my first trip in Russia was only five hundred rubles. But I followed the guy and got into his taxi anyway.

After rolling on a few meters, the driver turned his head towards me. "Houskvousk rousk vousk." he said.

Since I didn't know how to say, "Bring me to my hostel first and then I'll pay you." I handed him a five thousand bill.

No. We pulled off at a gas station. Ah, this is deja vu. In Wuhan (China) it happened the same. The taxi driver asked for his fee before we arrived at my destination. And then he used that money to pay for gas. In the end he brought me safe and sound to my hotel. So... it must be also so this time.

Exactly. The taxi driver handed my five thousand bill. Right when he got back into the taxi, he handed me my change. He waited until I counted the change before starting the engine. See? Wuhan, deja vu.

In front of a rather luxurious looking hotel, my taxi stopped. What?? I'm staying at a hostel, not hotel. Besides, this doesn't even look close to the photo I saw on the hostel's website. Back and forth, I argued to the driver in English that this is the wrong place and he assured me in Russian that he was right. At last he signaled me to follow him inside. Well... if the hostel I booked turned out to be a hotel, that would be great anyway.

After putting my suitcase back into the trunk, the driver talked to me which of course I just smiled at because I thought he was saying, "I'm sorry, I got the wrong address." until to my shock I heard, "Money, money!" He waved a bill to make sure I got what he meant.

"No! I gave you the address from the beginning. I agreed to pay for the destination to my hostel. The address is clearly written. I didn't ask you to take me here."

He got into the taxi and said nothing more. Okay maybe he was just testing me, I said to myself.

The driver began tapping on his GPS equipment. Oh! Why didn't he do so when we left the airport? The GPS code of my hostel was written in detail on the paper I gave him. The more I felt that I had given him all the information needed to bring me to my hostel. Moreover, even if the address weren't clear, the phone number was written. The lady at the taxi box office could have make a call to make sure of the exact location.

Then... there! Fine O'clock Hostel. My heart leaped with joy. "Yes, it is here!" The driver stopped the engine and got off.

Unfortunately, the curtain was yet to be closed. "Money, money" again I heard. The trunk was opened but he didn't take my suitcase out.

"Why didn't you use your GPS from the beginning?!? Here! The GPS address is written clearly! You could have followed this address."

I gave him a fifty ruble bill.

I gave him another fifty ruble bill. His tone rose a bit. He showed me a five hundred bill.

"No! Please!" I was thinking how to say "police" in Russian.

I gave the driver another one hundred bill and then a voice in me said, "Just pick up your suitcase and go away. It will be okay."

Now, how do you get in?? Suddenly a guy tapped on something and the gate swung opened. "Follow him!" I heard that voice again.

Behind me the black gate closed. What if this is not the place? How would I get out? Ah... it's summer. Just sleep on a porch somewhere.

"Excuse me. I'm looking for this." I showed my booking paper to 2 guys standing by a door.

Oh... at last. Curtains of drama one closed.

As I dragged myself down the stairs, I heard, "May I help you?" He carried my suitcase down the stairs and next... Fine O'Clock Hostel assured me I was back in Russia.

Hello Sonja.
I am glad to see you have new story of your travel to Russia posted. I love to read about your experiences and view of my country.
Even if you seem to have bad luck when it comes to taxi...

Hello, Katya!
I am happy to see you here again. Yeah... I wasn't lucky with the taxi thing. But, that can happen anywhere. A friend commented on my Facebook that in fact he never trust taxis from airports anywhere, not even in his home country. So he too understands that my not-so-fortunate experience with the taxi in Novosibirsk didn't happen because it was Russia. It happened because it happened. Period. :D

On second note, if you are planning on your third trip to arrive in Omsk, please, ask someone local to meet you. I can't say anything good about Omsk International, and taxi drivers overcharge there a lot. You, not speaking any Russian, will likely get triple price. Also International terminal is a separate building, that gets closed once last passenger passes checkout point.

And yes, I offer myself as a translator/guide, if you'll be in Omsk in December and have noone else planned.

3000 roubles!! I would have fainted if told so. Fare speaking, my guide in Krasnoyarsk said that 1100 RUB is considered a fair fare. However, he said also, that the taxi driver didn't take me straight to my address wasn't right, because I already gave him my exact address from the start. I didn't just show it him, but also to the taxi box office lady at the airport. The phone number was also written on it. She could have made a call, in case the driver really didn't know the place. When we made the deal, there were the three of us including the taxi driver, and he also knew my destination. So when 1100 RUB was agreed, that was for sure based on the address written on the paper I gave them. They questioned nothing about the address and I bargained the fare not. So it's funny that the taxi driver asked me for more money. My guide in Krasnoyarsk assured me that I had done the right thing.

Oh yeah I do remember about you in Omsk. Of course, I do. Hahaha. I had considered it into my itinerary but... I have to let it go this time. This time I'll be traveling the other Trans Siberian part from Moscow to Novosibirsk. Yes, Omsk lies in between, but maybe a next next time. I'll be spending a few days in Moscow, and then make stops in Vladimir, Perm, Yekaterinburg, and then Novosibirsk again. From Novosibirsk, I'll fly to St Petersburg. In St Petersburg I'll arrange a taxi pick up from my hotel. It's one of the hotel's service. So it should be fine, I suppose. From Moscow airport I'll probably take a taxi too. From the other cities, including Novosibirsk, I'll be arriving at Train Stations. Thanks for your concern, Katya.

I just wanted to warn you, that's all.

In Moscow I'd advice to take Aeroexpress. Depending on where you arrive and from where you leave, you'll get either a straight trip to train station or will need an additional short trip through Metro, which can be included in same ticket.

(I got registered too! I have a few old trips to share and it'll give me a reason to translate latest ones fully)

I'll be arriving at DME Airport. My hostel is on Bolshaya Nikitskaya Street. You got registered for what?

Oh,you mean have signed up to Travellerspoint also? Welcome aboard, Katya!! I look forward to read your trips!!

Honest taxi should cost about 1000 r. but will take you to door (and the one I checked offers English-speaking driver for extra 100). Aeroexpress+Metro will cost 450, but you'll have to walk about 1 kilometer.

I am right now trying to find an English-language version of best Russian maps site - 2gis.ru There you can plan your route down to walking map, but I don't see English version.