It was called Fine O'Clock Hostel. 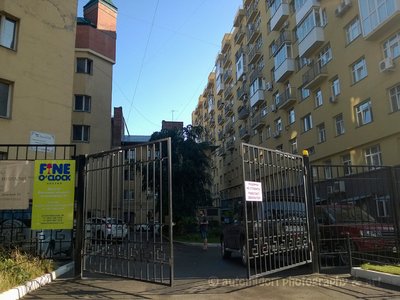 Do you remember when I mentioned about getting through the black gate here? That's the gate. Actually I didn't learn until I arrived in Krasnoyarsk. While I was at Fine O'Clock Hostel, I was unbelievably always lucky that every time I was to enter or exit the gate, there would be someone either going in or out. Thus, I just tagged along, and that someone never turned to me, much less looking suspicious. In this photo, a car had just entered the parking lot. Hence the main gate swung opened. But if you are not riding a car, you enter (or exit) through a smaller gate on either side of the main gate. On the night of my arrival, a guy tapped something on the gate and abracadabra! Open sesame! The gate swung opened.

The next morning when I was on my marks for money-exchanging-task, I pushed the gate while thinking that the gate is only shut at midnight. No. Under the bright morning sunshine of summer, it's also shut tight. I saw a silvery round button. I pushed harder. No move. Try the other gate. No difference. I felt reluctant to return inside the hostel and ask how to open the gate for the staffs of Fine O'Clock Hostel were although kind, spoke zero English.

Suddenly I heard footsteps of high heels. A young lady seemed running late. With one soft touch of a thumb on a silver button, again, abracadabra! Quickly I tagged along, and the gate swung back closed behind me. Yay! I am free!

Okay, so it's that silver round button. Maybe it's like when in Vladiostok, I thought. Press the button, and then the door would be pushable. So when I returned to the hostel, I pressed the silver button hard. But the button wasn't pressable.

Suddenly... like in movies, the giant black gate swung opened by itself. Wow. What did I do?

Engine noise? I turned back. Ooops! A car is coming in!

I have told you that the hosts (staffs) at Fine O'Clock Hostel spoke zero English but were kind. They were helpful and understanding. I received a warm welcome amidst of arriving in the middle of the night. Then I was showed around the place, where the toilets, the shower rooms, the kitchen, the common area, etc. were. For a 600 RUB a night, I got a bed in a room for four. The room was pretty spacious for four people. The walls were nicely painted. On each bed there was a headlamp and an electric power socket. When I was ushered into my room, there were 2 guests sleeping inside. The lights were out already. Of course. I felt uneasy for disturbing their sleep. But they didn't seem irritated at all. I, would have been. Instead, one of them got up and reminded our host to explain to me how to switch the headlamp on. The other male guests who were at the common room were also kind and helpful. Some greeted me in Chinese thinking maybe I came from China. I did, actually. Aha. I heard some other talking to each other in English. 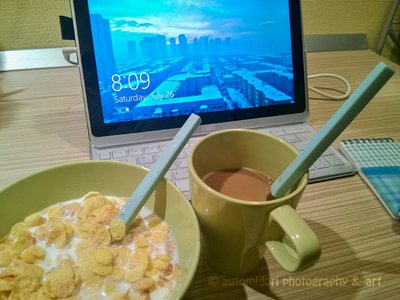 If only I weren't bound to an office desk, if only I could travel for months, I think I can spend like a week or two in Fine O'Clock Hostel and call it home. It's really a fine place. Oh yeah, that's my coffee which I mistakenly pour salt into. And that's the free milk and cornflakes. 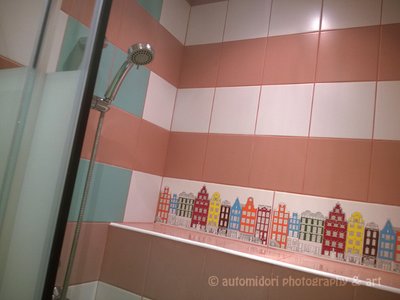 The shower room was immaculate. But, don't think of dancing in the shower. Space is tight.
Uhm... I love those colorful buildings on the wall. 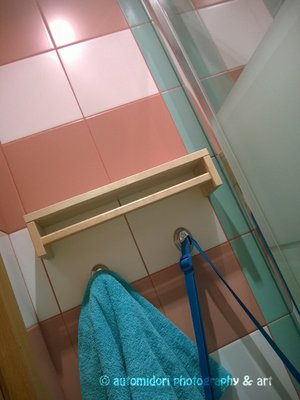 The shower room was divided into two areas by a glass sliding door. The area before the sliding door is the dry area where you take off your clothes -- and put on again. There's a small wooden rack with a wooden rail beneath, and two hooks. You know, sometimes people put a bathroom scale in the bathroom. In this shower room, a scale is not needed. Especially for Russians and Europeans who are huge, the shower room is the scale, I would say. If you find it difficult to do your chores here, it's a sign that you need exercise -- to reduce your size. Aha.

I am grateful that although I had already checked out in the morning, I was lent a new towel and allowed to take a shower in the evening. Hence I left for the train station fresh and made a good night sleep on the train to Krasnoyarsk.