The Vladivostok I Saw

I kept on walking...

From my hotel I walked to the left side and took the path towards the sea coast that could be seen from my room window. 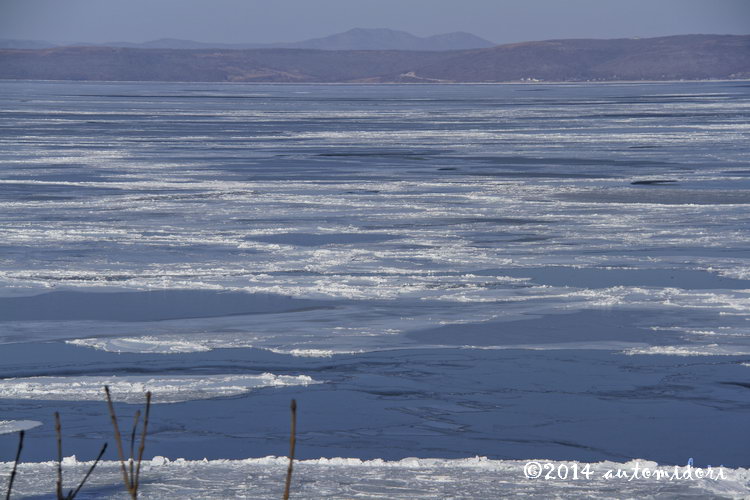 Amur Bay was frozen. Right behind the mountains there lies China, where I was yesterday; where the landscape has not ceased to lure me. 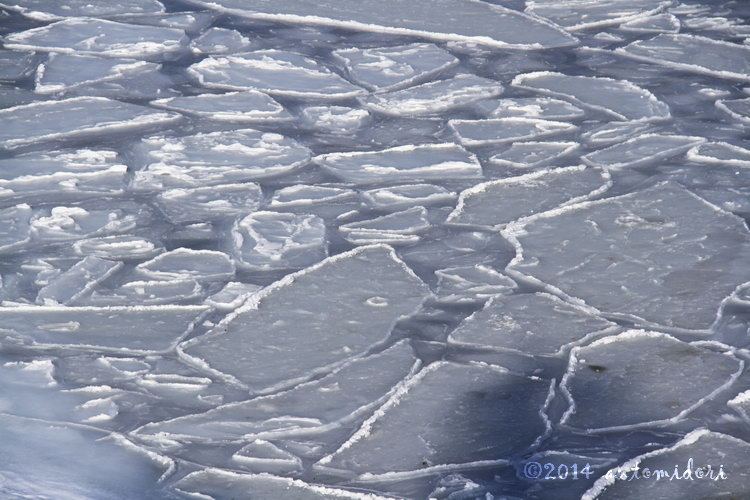 A close up of the frozen sea. 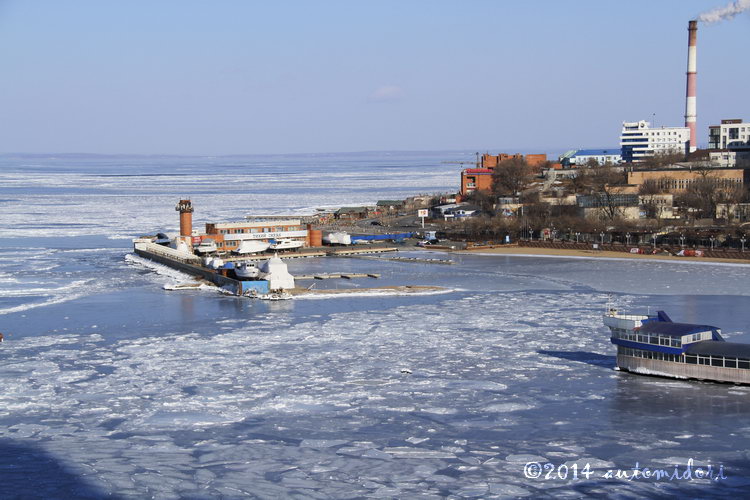 Even the harbor stood still in silence. 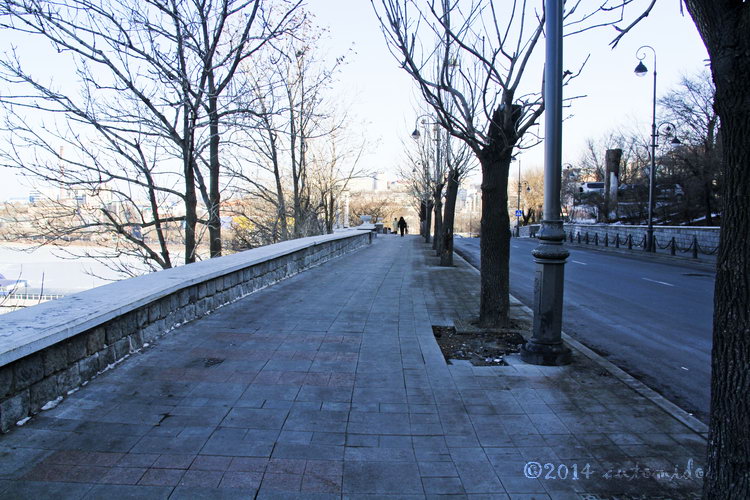 I kept on walking... 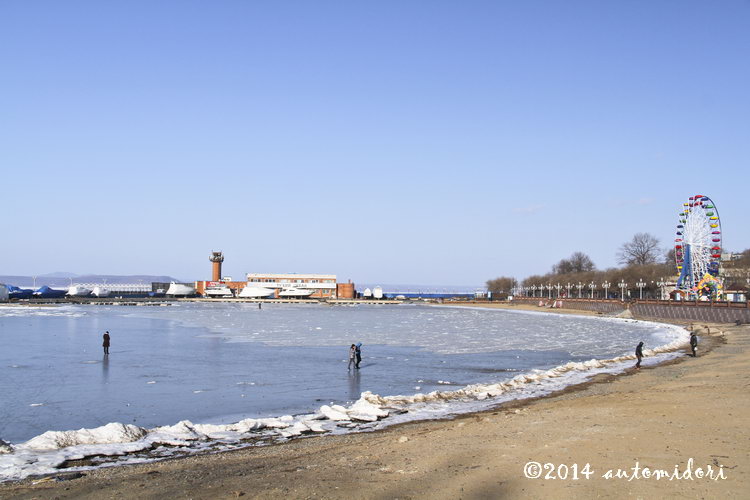 ... until I reached Sportivnaya Gavan, or Sportivnaya Harbor. It was a dream-come-true for me, because I had long wished to see snow on a seashore. I actually got more than what I had dreamed for. The seashore was walkable. 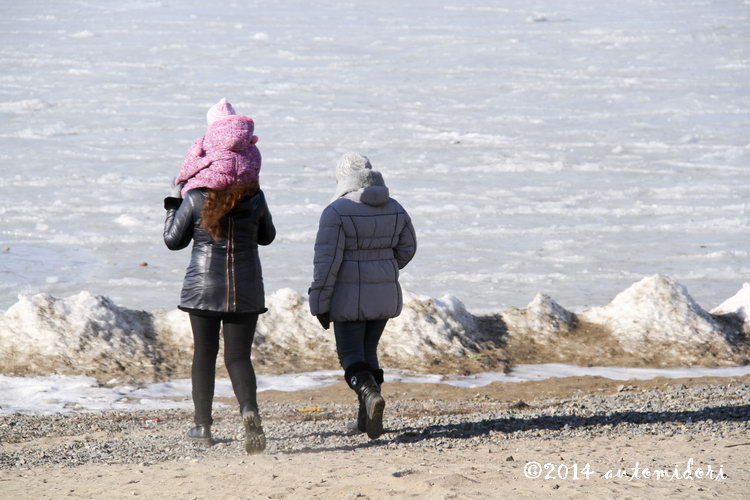 Would you want to try? 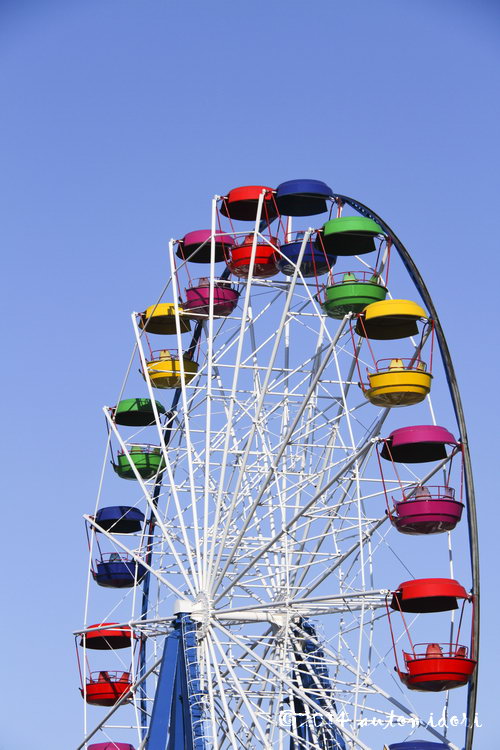 According to what I have read, this place should be a boisterous and active place. 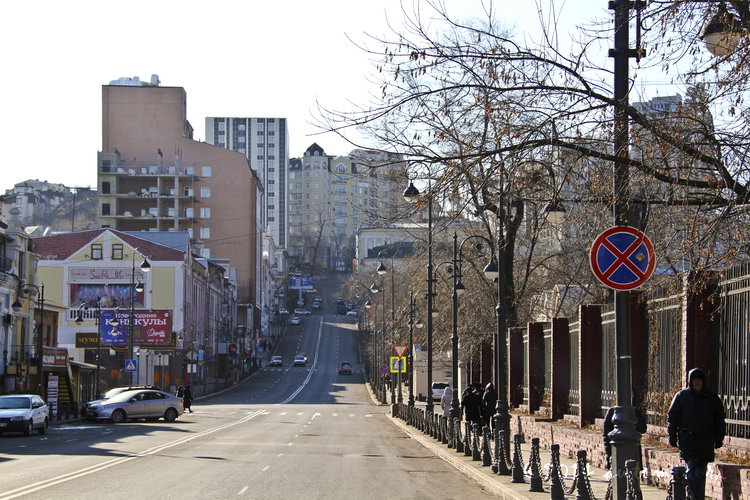 Here's one of the "ups-and-downs" of Vladivostok. It's a hilly city, a good thing to keep you burn energy and stay warm in winter. 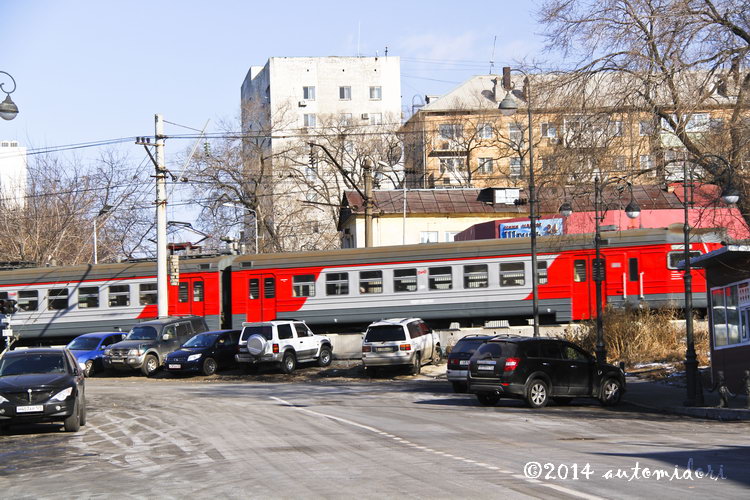 Ooops, a train is passing by. Although not all Russian trains are painted like this, white and reddish orange is the color of Russian Railways. 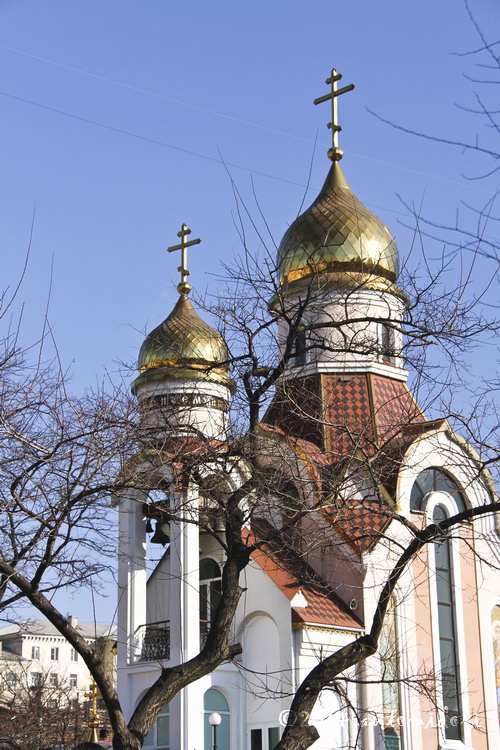 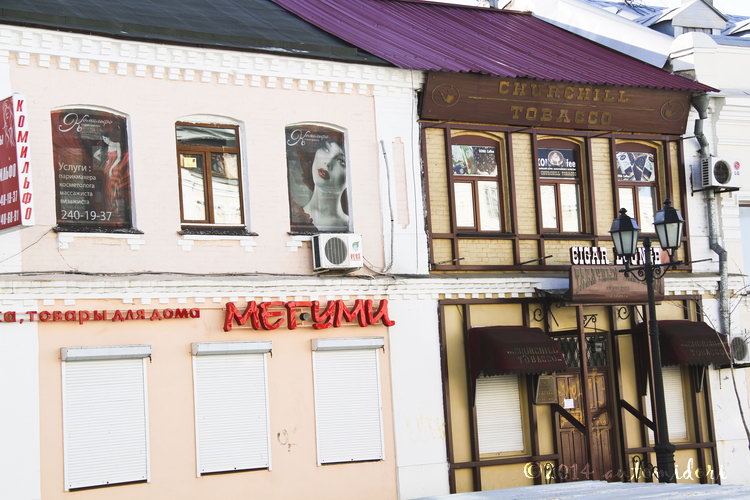 Admiral Fokin Street was dead silence for two reasons:
First, it was 1st of January;
Second, it was still too early.
Later I discovered that people here starts life late and stays up late.

According to Vladivostok's website here,
This street was initially called Peking Street commemorating the Convention of Peking signed in 1860. According to this treaty, the Primorye and Priamurye territories were adjoined to Russia for good. Later it was renamed into Trade Street because the kiosks, selling mostly Chinese products, stood here at that time. Since the year 1964, the street bears the name of the Admiral Fokin who commanded the Pacific Fleet for a long time and applied many efforts to its development. 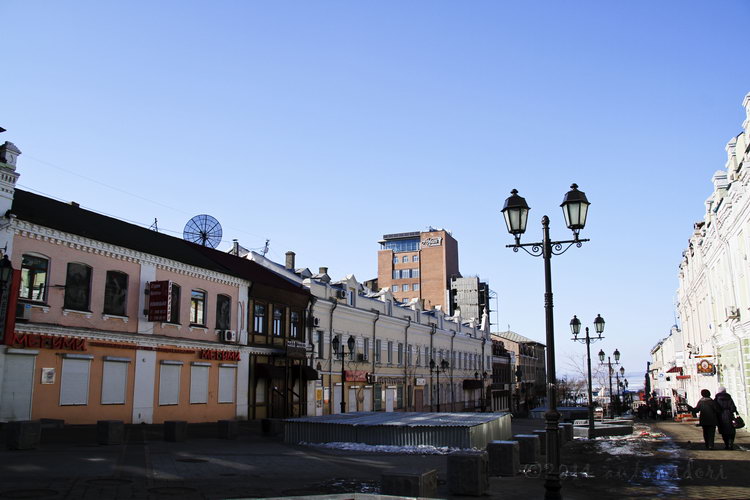 Admiral Fokin Street's main 'sight' is perhaps the sea that can be seen from any point of the street. You may descend the pedestrian artery to the Sportivnaya Naberezhnaya (literally: Sports Seafront) - one of the oldest favourite recreation places of Vladivostok residents.
You are facing it. That's the sea behind there. 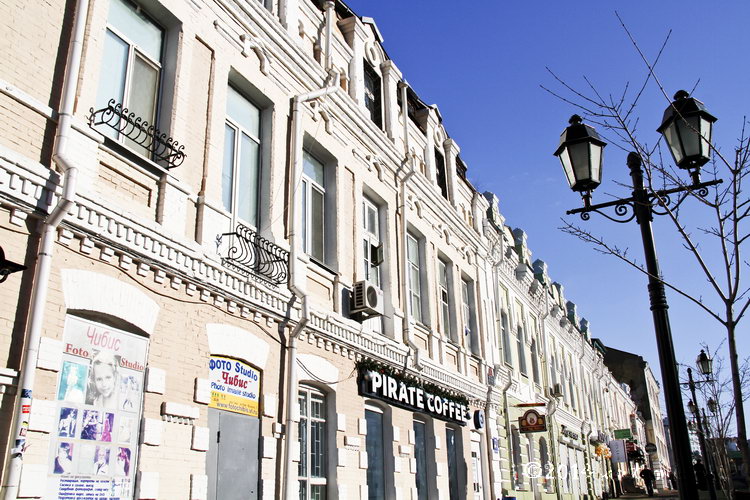 ... to stop by at numerous shops and to drink a cup of coffee in one of the many cozy coffee houses standing along Vladivostok's main pedestrian street. Don't forget that. 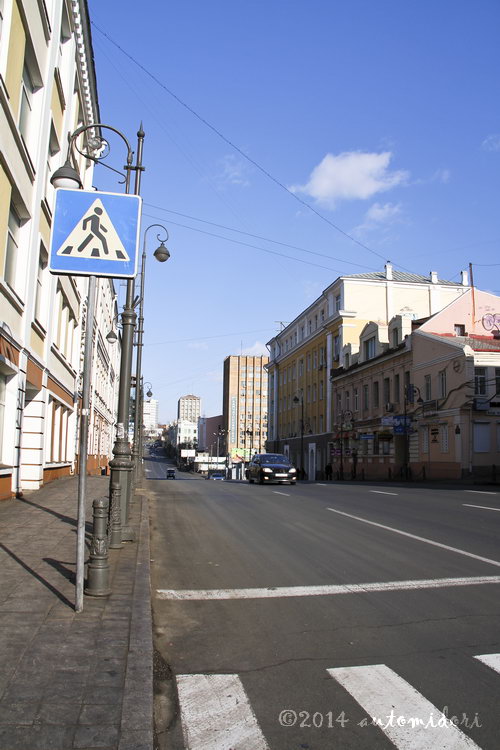 In Russia, I mind you, cross the street only where there is this sign. Russians are kind, but rules are to be feared. I once broke this rule accidentally because I thought as long as it's at the traffic light -- the street was quiet anyway -- it's okay to cross the street. When I reached the across, a lady looked me into my face. "Houskvousk rousk voussskkk!!" while pointing at a cross sign at the other side of the crossroad. I bowed down to her again and again saying sorry until she stopped her "Houskvousk rousk voussskkk!!" She must have been yelling, "Hey, you! Don't you think this is Harbin!!" 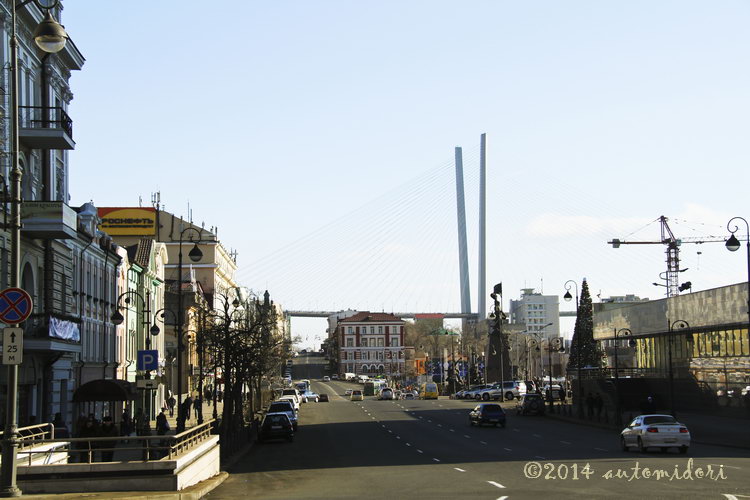 Now, take a close look to that square on bottom left. That leads to an underpass. There's no cross sign, but plenty underpasses at each side of the street. Take that.

But wait... this is not just an underpass. Plenty of shops inside, and a nice coffee shop. Let's get a cup of hot cappuccino before we continue.