Copying from Stolby's website:
Looking east of the Urals in the physiographic map of Russia, there's a green field on the left, the West Siberian Plain, and a brown field on the right, the Mid-Siberian Upland, separated by a sharp boundary in the very center of the vast territory. The boundary is delineated by the Yenisei, the great Siberian river, ranked among world largest rivers. It runs a long way of about 2500 miles from mountains in Mongolia to the Arctic ocean. The river crosses the Trans-Siberian railway in Krasnoyarsk, an important Siberian city with a million-scale population. The city has various sights worth seeing but the Stolby National Wildlife Nature Reserve, its glory, is a matchless attraction.

Indeed, for many travelers, Stolby had been the reason -- if not the only -- of coming to Krasnoyarsk. I, had been in Krasnoyarsk, merely because it's lying on the Trans Siberian Railroad. So I searched about what I could do in Krasnoyarsk. Through SibTourGuide, I ended up doing what I had never had the slightest thought I would do. Plus, some people say that the real traveling brings you to know yourself (and your companion). I, had always thought that I love nature and that I am not afraid of heights. Stolby told me I was wrong.

With me and Anatoliy, were Damir and Gala joining the Stolbism. Uhm, Damir and Gala were in Krasnoyarsk in the first place not because of Stolby either. They were joining a marathon championship. They were athletes! On the way to Stolby Nature Reserve, I listened to Anatoliy's brief introduction to Stolby. And then the dark morning sky began to pour out which summed up my nervousness. I concluded that I wouldn't be able to take care of more than myself, so I left my D7 in Anatoliy's car. Lumia 920 would be just enough, I decided. 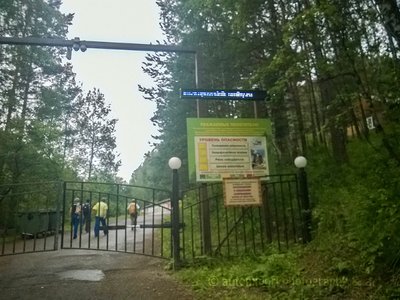 The entrance gate into Stolby Nature Reserve. Damp, wet, chilly, nervous... What if I can't catch up with these athletes? 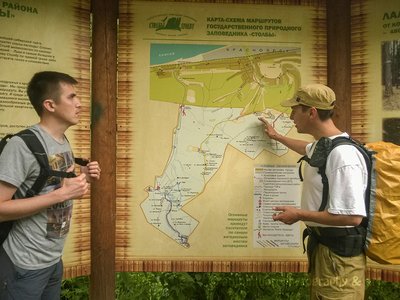 Here's Anatoliy, our guide, explaining about the location, and about the route we were going to take. 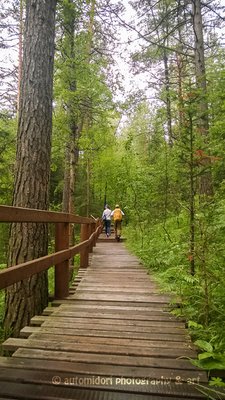 I had imagined a pathway only of ground, steep, and slippery because of the rain. So, I was happy when I found this. Great. Wait... 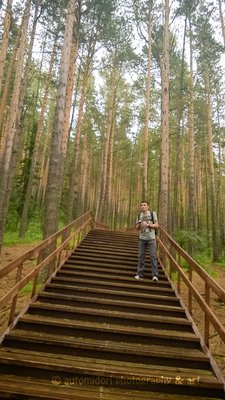 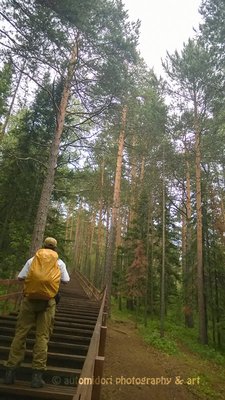 Of everyone, I admire Anatoliy the most, because his back was loaded with our lunch, snack, and a big thermos of hot tea, and yet he was the one most vigorous. 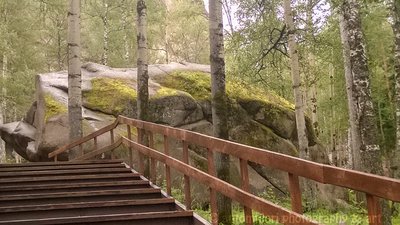 What do you think this rock looks like? Anatoliy challenged us to figure out how this rock resembles an elephant. I was the one who first got it. I was happy and proud. Talk about nature, I know well. No, I said that to myself only.

It turned out I viewed the elephant from the opposite side Anatoliy did. To me, the elephant's face is on the left, but to Anatoliy it's the right side.

"How can an elephant sit with its butt above the ground higher than its head?"

"No, the head is that one," insisted Anatoliy. 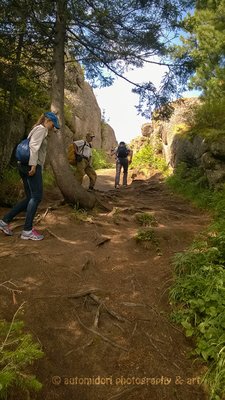 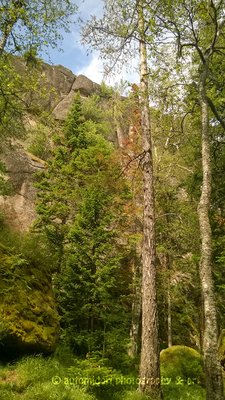 But neither was bad weather. The sun began to shine bright, piercing through the branches, making the leaves glitter. The sky tuned blue. 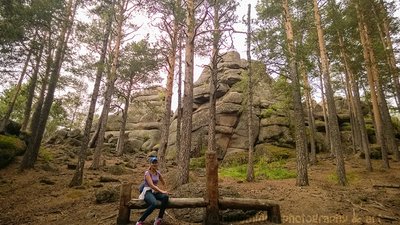 That's my pretty Russian companion, Gala. The other athlete. So here in Stolby, there are tens of rocks like this. Let me quote from Stolby's website again:

The growing Eastern Sayan mountains were pushed up by pulses of magma which arrived from great depths millions of years ago and left syenite outliers on the surface, rocky cliffs of a wonderful beauty. People call it "a land of fantastical rocks" or "a land of forest giants".

I tell you, those are just to name a few. 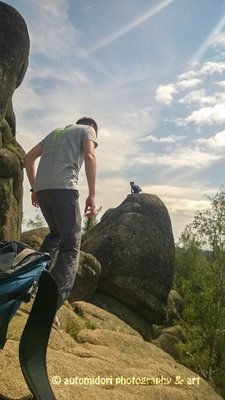 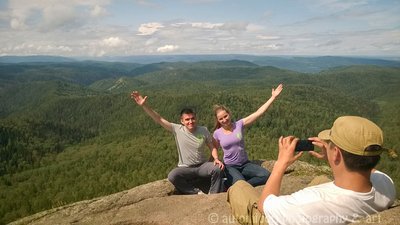 Damir and Gala changed into their Running School uniform. Yay! We have made it! 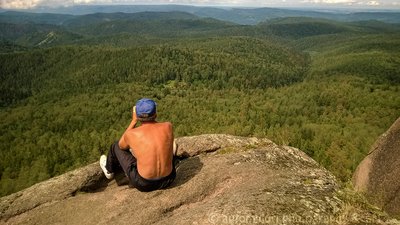 The chilly air had turned into warm for me, but hot for a local. 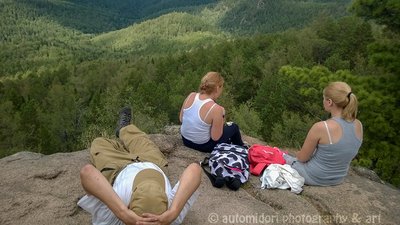 Let's take a break. See you in next post.... until I tell you how I met myself.