Love is easy to say until it's lived.

Let me quote from Stolby's website again:
The offshoots of the mountains sinking in the green ocean of taiga approach the very outskirts of a great forge of Siberia - where else on Earth to find anything parallel?

To that first phrase, I can't agree more. Take for example: 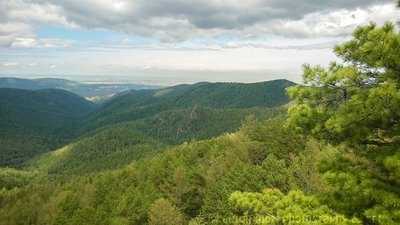 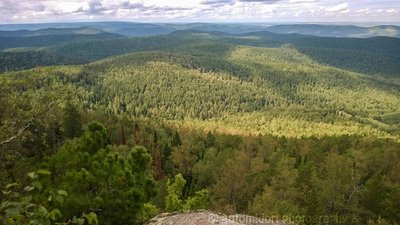 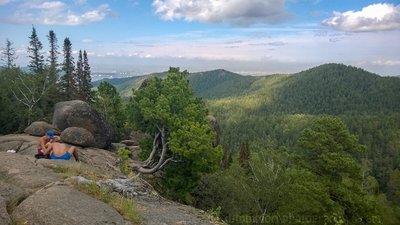 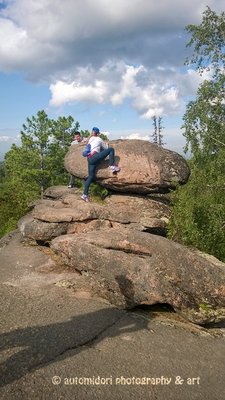 As I mentioned in previous post, we went rock climbing. "For sure!" you would say. "How would you get those views without climbing up?" That's true. 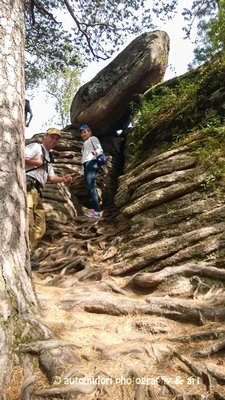 However, we climbed one rock after another more for the sake of climbing rather than for the view -- I suppose. 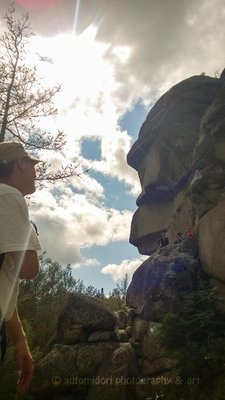 Every single giant mass of rocks had something to resemble with. This one, was said to be a man's face, if I remember correctly. Yes, I think it does look so. It's a man's face wearing a hat on.

The only rock Anatoliy didn't invite us to climb on was the one that resembled a monk praying. Well, who dares to disturb a praying monk by climbing over his head? 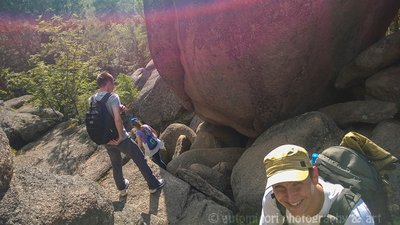 Here in Stolby Nature Reserve, I met myself. I confessed to myself, I am afraid of heights. While Gala hopped from one rock to another, nearly hundred eighty degrees stretching upright, I had to rely on Anatoliy's hands to hold onto. At times, Anatoliy gave his foot for me to step on. And yet, for the Stolbists, this is just like the most basic part. They do things like this in winter, when the rocks are even more slippery by snow. Or you can take a look at this blog from Katie. Having been in Stolby Nature Reserve myself, looking at Katie's photos is adrenaline pumping enough for me. 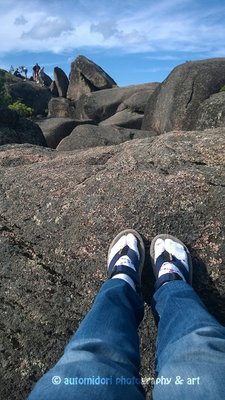 Here I sat alone waiting for my Russian companions climbing on the other rock more higher, more steeper. I didn't dare to even stand up. This was the last rock I climbed to the top. For the rest, I just waited on the ground for Anatoliy, Damir, and Gala satisfy their passion. I met myself again. I confessed to myself, I don't love nature as much as I had always thought I did.

Moreover, in previous experiences with tour operators, it sometimes happen that the actual itinerary was shorter than what had been described on the ad. The ad says I would go to A, B, C, D, and E places. In reality, I was only taken to see A, B, C. With Anatoliy, it was the opposite. In reality, he took us to A, B, C, D, E, F, G, H, I, J, K, ... with passion. In previous experiences, I got irritated with the tour guide, demanding him or her to fulfill what had been promised according to the ad. With Anatoliy, his passion became something I had to bear with. 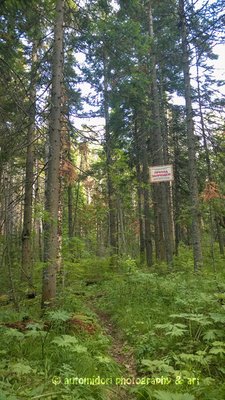 We walked, and walked, and walked. Anatoliy told us that we would descend on a chairlift whereas all my eyes could see were trees, and trees, and trees. My Lumia 920's battery wore off, and I hated myself for not bringing a power bank along. I used to bring one every where: to office, to church, to the mall, to the gym... How could I not remember to bring one this time? We started out at 10:00 this morning and it was 19:05 when I took this picture.

When we eventually got on the chairlift and reached the parking lot, it was about 20:30.

"Guys, you deserve this!" said Anatoliy to us on the chairlift, which was nice and bad at the same time for me. It was nice because of the feeling being swung up in the air, flying over the taiga. It was bad, very bad, because I had no camera to capture the scene.

At the parking lot, my dear Russian companions were patient to wait for me take a couple of pictures of the vicinity with my D7.

Suddenly, I heard Gala behind me. "Sonja, let me take your pictures."

The long day of Russian summer had turned dark when we arrived at our hostel. It took the whole night and the next morning, for me to verify my feelings.

(1) I am so grateful to meet a tour operator like Anatoliy. Having been traveling to several other places with various travel operators, calling myself lucky isn't just enough.
(2) Having Damir and Gala with me was something I consider money cannot buy. Warmhearted people, pleasant to be with, speaking good English...
(3) Then what made me grew bored during those last hours? Usually during traveling the most thing that can make me bored is eating. I hate it when one spends too much time for that activity. This time, on the contrary to everyone, I was the first and only to grab a pizza from a shop next to the chairlift terminal. No one but me, was thinking of dinner.
(4) If I had a power bank with me and thus could click and click till the last minutes, would I be still bored?

Actually it wasn't until I boarded the train to Irkutsk that I found out what exactly had made me bored. If I had had a power bank with me, my boredom would have diminished 50%. The other half would stay, because to me, the scenery was the same all over everywhere. On either rock we climbed on, it was just another angle of view. To make matters worse, just a week ago I had been trekking Kanas (Xinjiang, China) where the scenery seemed unfolding from one screen to another by every one hundred meters. Me in Stolby was like me in Nha Trang (Vietnam) after being back from Lombok (Indonesia) just 3 months before. I watched the seashore in Nha Trang like: "Okay... not bad."

The rocky giants have witnessed a good deal of life stories and events. The land at the approaches of the city has been largely visited for about two hundred years. It has become a subject of numerous scientific and popular books and articles, feature and documentary films, an attraction and a source of inspiration for poets, musicians, and painters. It's a mode of life for many people to come there every day off enjoying nature and climbing for sports and for pleasure. The common practice is free climbing, without a stand by, a skill mastered by the Krasnoyarsk rock climbers since cradle, which strikes tourists and experienced guest climbers who never risk to do without a rope. The rocks have thus served as a training field for many outstanding rock climbers and mountaineers. said Stolby. And, the love for nature I had always proclaimed I had, I now know, is nothing. Love is easy to say until it's lived.