and a little to the suburbs, at a very short glance.

With our mind lingering on Stolby, let me show you a few shots from the parking area. 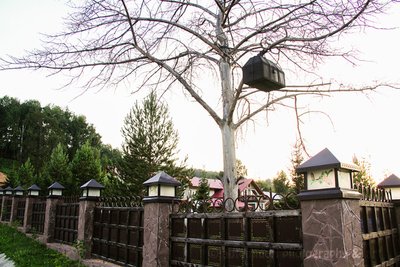 You remember the bird-tree-house I showed you in previous post about the little things in Stolby, don't you? This one, too, is hanging in the tree. You see that? 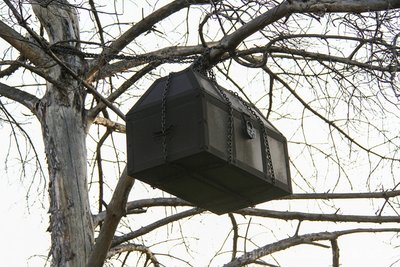 However, it doesn't really look like one, because it's shut and tied tight. Treasure in the tree? 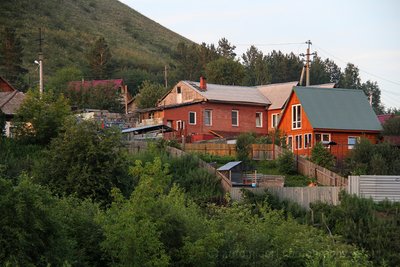 Now I got my D7 back with me, but the golden light was nearly over. Anyway, that's the picture of local residence in Russia. In Krasnoyarsk, to be precise. 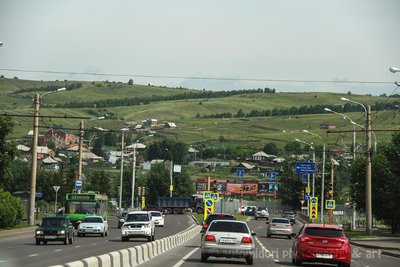 Having been brought up in a hectic polluted metropolitan city, my image of "city" had always been "no mountain" and "mountain" meant "village" Therefore, even after understanding that it doesn't always have to be that way, it's always kind of a thrill for me to be in a "city" with "mountains" around. This picture was taken on our way to the dacha area I told you previously. 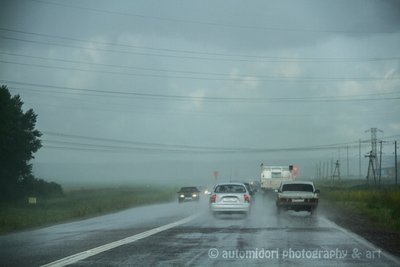 Not long after we hit the road, heavy rain hit us back.

I turned to Anatoliy. "You said it won't be raining today."

"I bring a raincoat with me for you."

Fortunately, we headed to the blue side. As you have seen on my previous post, it was sunny bright... 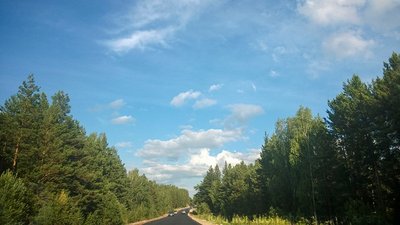 ... until our way back to SibTourGuide Hostel. 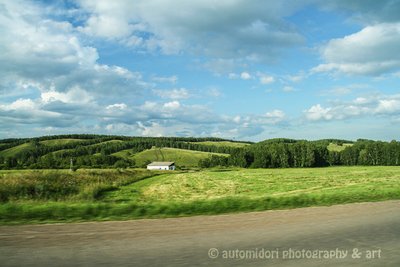 This is 'just a shot' taken from my car window. Uhm, Anatoliy's car, I mean. 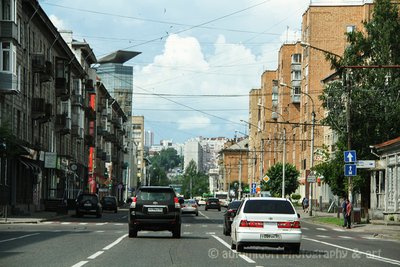 Let me show you a couple snapshots of the city center which might give you the feel. It's really just a couple of, because I didn't have much time to explore the city center. 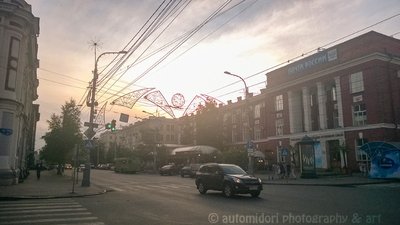 On the evening after I returned from my dacha ultimate experience. 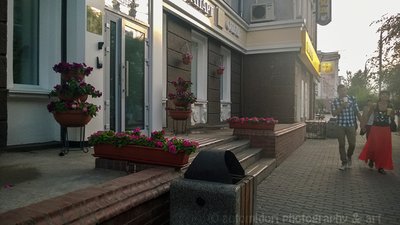 No doubt, it's summer. 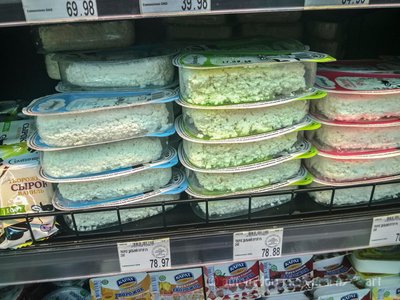 I intended to ask Anatoliy what this is, but I always forgot. Then I thought I would ask the other Russians I meet along my trip. Nevertheless, there was always more interesting (or confusing) things to discuss that I didn't remember this photo until I began writing this post. It seems like something tasting yogurt. 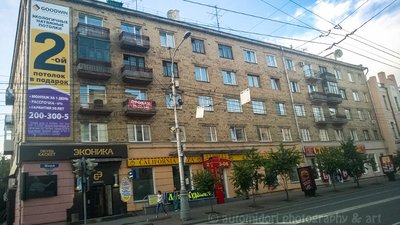 I don't remember anymore for what reason did I take this picture. For sure, it hadn't been because of the "California Pizza". Anyway, this is it: Krasnoyarsk. 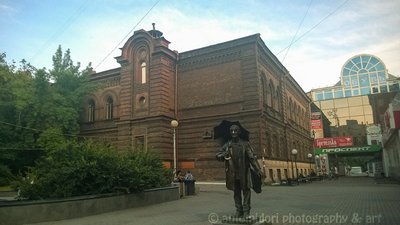 Right next to my hostel's apartment building... 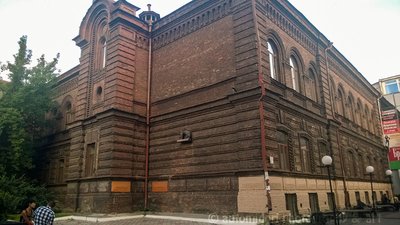 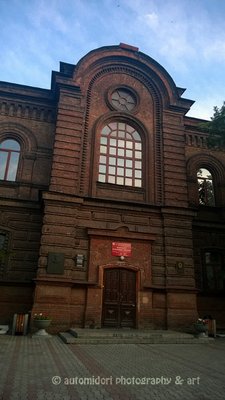 Behold! The most interesting part is yet to come! Aha. 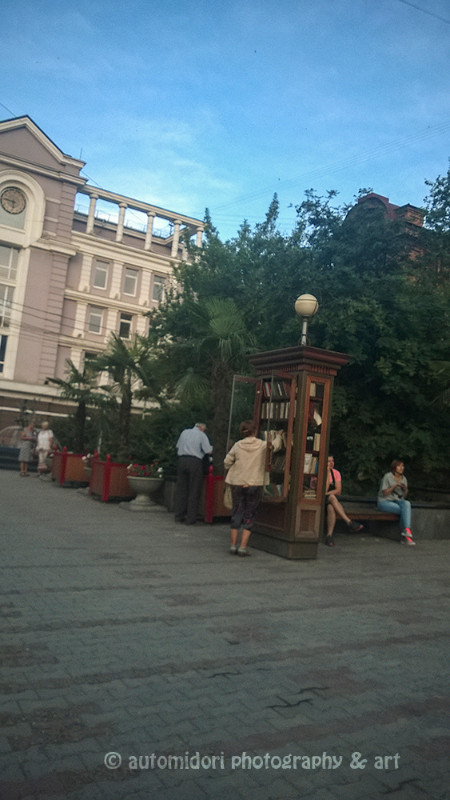 Do you see that bookcase?? My jaws dropped. An open-air bookcase just by the side of the street like this?? 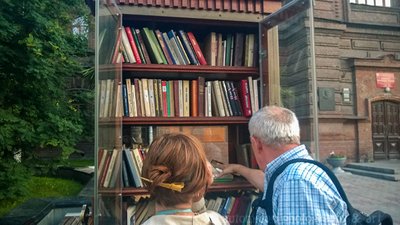 I walked closer. Unbelievable. The books are even neatly kept. 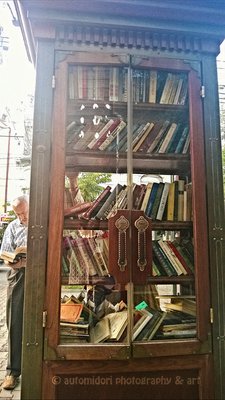 I Googled further and found out that bookcases as this are in some other places around the world. Here's one proof from Pinterest. I thought it was something common as well in Russia, but it wasn't -- or is not yet. Damir and Gala were surprised when I asked Anatoliy about this bookcase. I was surprise no one tore the pages to make aeroplanes. Damir was surprised no one took the bookcase away. Anatoliy told us that some of the people were pessimist it won't work. But after one and a half year, the project proofed fine -- even in winter like this. I translated this link with Google Translator and learned that:

These public bookshelves are in many major cities around the world, but as far as we know, in Russia, they are quite a bit (if we talk specifically about street facilities). So now we can confidently reckon Krasnoyarsk to cultural centers, where there are no barriers for reading!

According to the description of a photo I came across in Flickr, the project was launched on October 5th 2012. 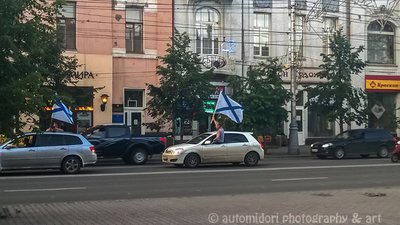 A strike? A parade?

Do you remember when I told you how confused I was at the entrance gate to my hostel in Novosibirsk but always lucky to get somebody to tag along? Finally, in Krasnoyarsk I understood. 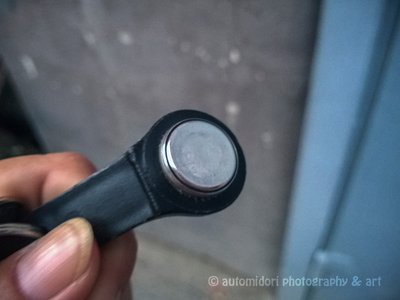 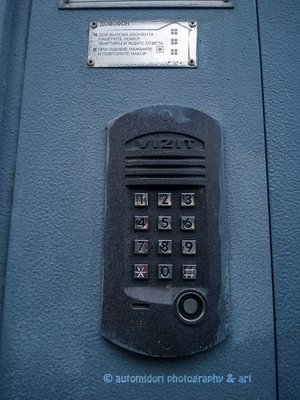 ...on that round silver button below the numeric pad. Merely pressing the button with a bare thumb won't move anything. 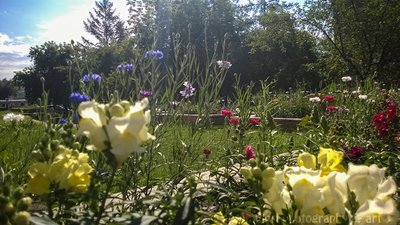 Hi again. I wanted to add a couple of comments here.
Chest up in the tree wasn't there when I was in Krasnoyarsk, but that was years ago, so I can only offer my guess. But I think it is an allusion to a fairy tale about Koschei the Deathless, who's death was in needle, hidden in egg, in duck, in hare, in an iron chest up in the oak tree.
That "yogurt tasting" thing in the shop is cottage cheese. Different colors mean different fat content.

And I am surprised and happy to see that book-exchange project is still alive.

Wow! So probably that chest carries a story. How fascinating it is really!!

How do you usually eat that cottage cheese? With bread? Or just like that like you drink yogurt? Which color is the one with lowest fat? I would like to try it later when I come this December.

You add some sour cream and sugar - otherwise it is too dry and slightly sour - and eat it for breakfast, like you would eat a porridge. Some brands come already sweetened and less dry. Colors are different for different brands, but there should be 0%, 2% or 5% printed on top.

Oh so I must buy sour cream also.