Listvyanka, along the Lakeside of Baikal

The goal was Baikal. However, it's the journey and the little things that composed the story.

The one and only reason of my coming to Listvyanka was Lake Baikal. Through RussianTrain.com, I purchased a ticket for Circum Baikal Rail Tour. With an extra fee of 150 RUB, I got my ticket delivered to Irkutsk Railway Station at the time my train arrived. I asked Natalia who exchanged emails with me if she had any information about how to get to the bus station for Listvyanka from Irkutsk Railway Station. Natalia answered, the guy who brings my ticket will answer all my questions.

Sure enough a young man met me at the train station with a folder containing my train ticket, a very detailed note from Evgenia explaining about how to get to the boat pier for the ferry to Baikal Station, a map to the pier from my hotel, and a map of tourist attractions available around my hotel. I was stunned. I only purchased a ticket. I didn't book a hotel through them. And yet, they been so thoughtful.

As I have told you previously, I got off the train in hectic mode. In haste, I poked my bag for the voucher I got from RussianTrain.com. I thought this guy must want to make sure he is delivering the ticket to the right person.

"Here you are." I handed over my voucher.

"What's this?" He frowned and took a look. "Ah no need!" He handed back to me my voucher. All the way from China and then to Russia, I have been guarding that voucher like a credit card, because I thought that was the only proof of my ticket purchase which I had paid in full payment. Now this guy was instead like "Why do you need to show me something of nonsense? I know you are Sonja."

But, nobody is perfect. This guy messenger couldn't explain to me which transportation to take to get to the bus station for Listvyanka. He tried to make phone calls with his cellphone but couldn't get on the line. "Sorry. Phone here bad," he apologized.

Finally, I got to speak to, Evgenia I think. She told me to take tram number 4A. I looked around but could find nothing that resembled a tram stop. "Where can I get on that tram?" I asked.

"From the train station."

"It's just right there."

"Right here? Where? Can you ask this guy to show me the tram stop?"

I gave back his cellphone, he talked through it, hung up, put it back into his pocket, and that's it. I held my breath and waited. He stood still.

"Where can I get on that trem?"

"There," he pointed to what I thought was across the street.

"Then let's cross the street."

At this point I was like: "What?? Wait and see for what?? There are only few buses a day to Listvyanka and I must not miss it. I must get to Listvyanka today or I'll miss that Circum Baikal which is one of my major destinations on this time's Trans Siberian journey. I can't afford to wait and see, you know!" Since he had been so nice to me, I didn't have the heart to utter all those words. My mind began working on a composition, soft but explisit, for this messenger guy to comprehend.

Suddenly, to my shock, he held up my suitcase and took big steps across the street. "There!"

My first instant thought was: "He is running away with my suitcase!" I rushed behind him.

The messenger guy did another extra mile for me. He got on the tram with me and informed the tram conductor where I was going to get off. And right there where I got off, was the bus stop for Listvyanka. It's not exactly a bus actually. Neither was it a taxi. The Russians call it, Mashrutka. At first I felt rather embarrassed, because it seemed I was the only one bringing a suitcase although small in size. But then a couple bringing a dog as huge as a German dog, got on. The fare up to Listvyanka was 120 RUB. 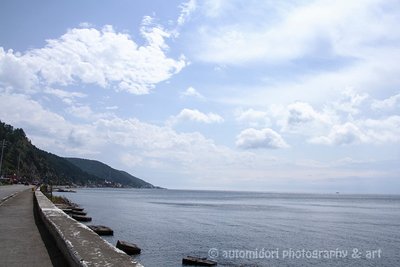 Listvyanka is a town located at the lakeside of Baikal. 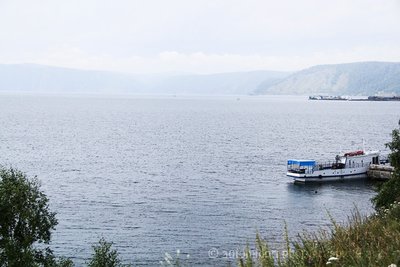 There were several ports along the lakeside. 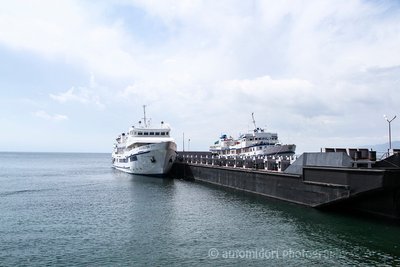 Right across my hotel was a bigger port. In the evening I saw a large group of Chinese tourists getting off from a ferry here. 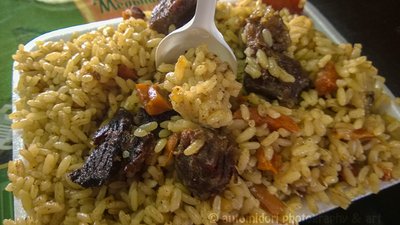 In Listvyanka I met lots and lots of Chinese tourist. At the marketplace, my mind returned to China. To Northern Xinjiang, to be exact. Look, same food! Pilaf. My Uyghur driver told me that Uyghur people more often say "polo" or "pola". Besides pilaf, there were also mutton barbeque vendors here.

The marketplace was busy. Fish mongers, souvenir vendors, fabric stalls... lined up. Next to the market was a seal zoo. Don't be mistaken. These are freshwater seals, residents of Baikal Lake. From the outside it seemed more like a 3D theater where you'll feel like diving into Baikal yourself and meet the seals. Seeing the huge and loud crowd waiting in front of the entrance door for the next show, I withdrew from joining the crowd. Better amuse myself with another toy. 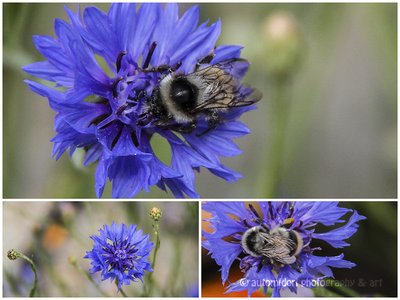 A ball of fur called bee. 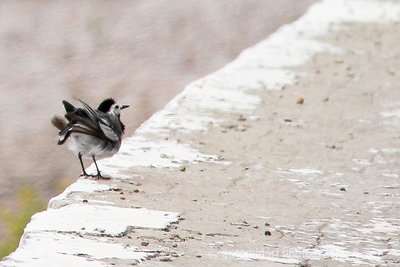 A ball of feathers called bird. 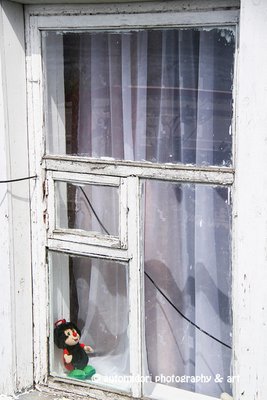 Or, balls of fluff called doll. 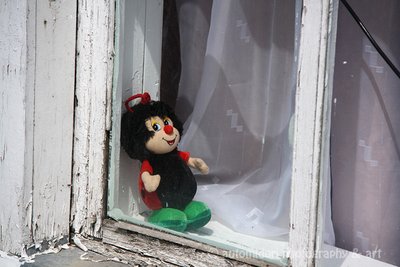 "Hello? How does it feel outside there?"

"Not so good a weather."

"Raining cats and dogs. For half an hour the sun is harsh, but the next half an hour it turns cloudy. And then it begins to drizzle. I run for shelter. But then a hard wind blows, I can feel the rain no more. I pull over my shawl feeling cold. But then sunshine returns."

"If you were made of fluff, like me, you would have felt better." 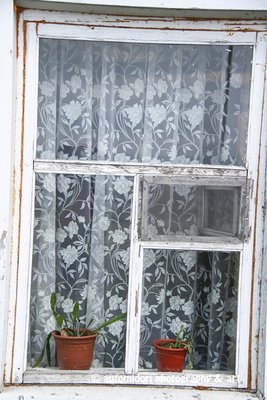 While people with silly imaginations, like me, puts a doll on the windowsill, people with abstract mind, put pots of dying plant, like this. I am deeply impressed. No, not by the pots, but by that little window shutter. I find it kind of so typical Russian. I can't help wondering architecturally, what's the purpose of it? I mean, why do you cut out such a small part of the whole window and asymmetrically? So that not too much air will come in as it's darn freezing cold in winter?? Well, at least, why not put two small window shutters left and right so it would look more balanced? 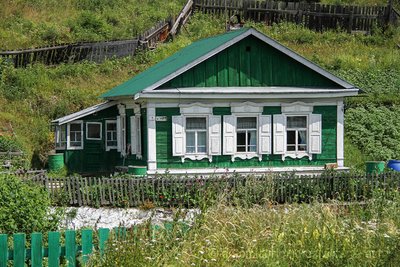 Irkutsk, I once read, is known for wooden houses. Being only 68km away from Irkutsk, apparently Listvyanka is filled with wooden houses also. However, I assume you can find wooden houses everywhere all the way along Siberia even until the border with Mongolia. I saw some also in Khabarovsk. 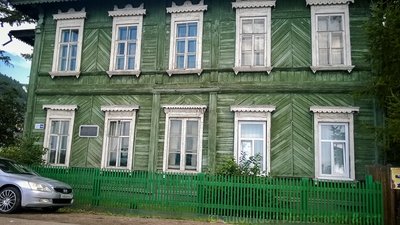 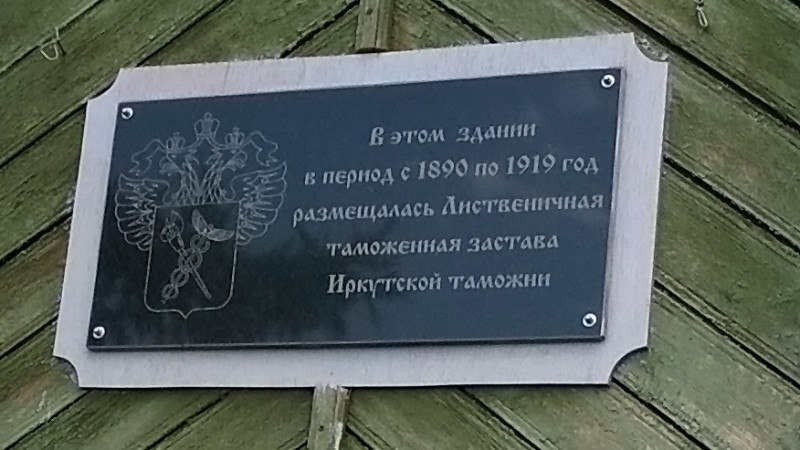 That's what's written on the wall. If you read Cyrillic, help yourself. 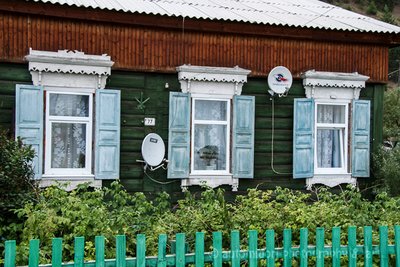 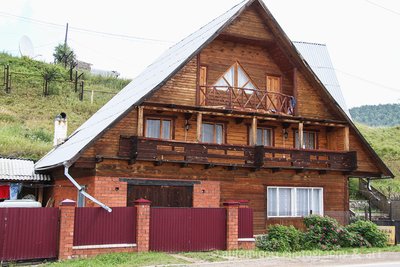 This, is of something wooden, but hundred percent modern. 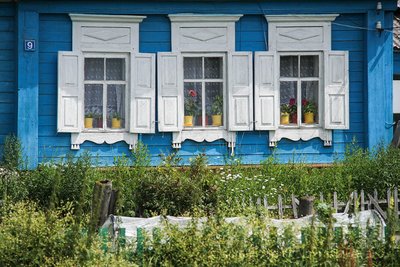 Of all houses along the lakeside, this one is my favorite. 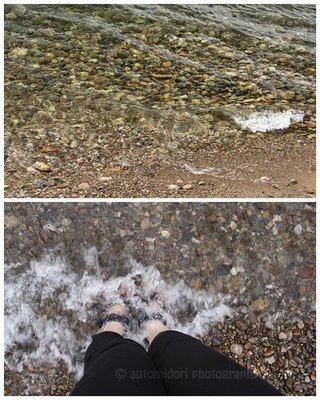 Summer it was. I waded in, waited for the waves roll over my feet artistically, and clicked. Check. No. That's not art. I waited again. Click. No. Not well covered. I made several attempts until my feet began to hurt. It felt exactly like when I pour my feet with water from the refrigerator when I was a kid. "Pa, why does ice water feel so good in my throat but so awful on my feet?"

"Because you are pouring too much on your feet. Too much ice can hurt. Anything too much hurts." was Dad's answer. 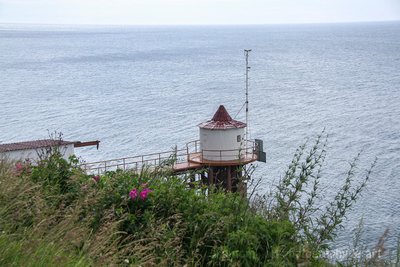 So? Is that all about Baikal?? I know, deep deep in your heart you are asking me that. Aha. Wait and see.

Even being Russian myself, I too for a longest time was confused why typical old window has that tiny shutter. Then I stumbled on some article that explained it. It's main purpose is for potbelly stove's chimney. And yes, those were used even in cities up to WWII, and in some places longer.

For potbelly stove's chimney? How? You thrust the chimney through that tiny shutter? But why is it only that part of the whole window that is flipped opened? In summer, when a stove is not needed, wouldn't people want more air to breath through the window? Because it is chilly outside so just a little opening is enough?

Basically, yes.
In winter in old country house you want windows open as little as possible, especially if you have to use potbelly stove for heating - it'll get house warm, but will cool down just as fast. Also look closer at window frame: even with second winter frame set against it, it'll let in a lot of drafts. In summer heat thick walls and small windows will keep house pleasantly cool, and there is just too much to do outside to stay in house.