Not Paul but Nice Chocolate

... which I never regretted.

Although food is normally not a priority for me when traveling, to be local is priority. Meaning, as far as conditions permit, when in China I eat Chinese food, when in Japan I eat Japanese food, and when in Russia I eat Russian food. When in America, I'll eat McDonald's maybe.

Therefore, when I calculated on my itinerary for December 22 that there's some time available in the morning, I checked on Rough Guide's paper guide book for Moscow. Two cafes were said to be frequent stops for Muscovites on the way to work. Great. On the way to my work a.k.a. trip, I'll stop over. 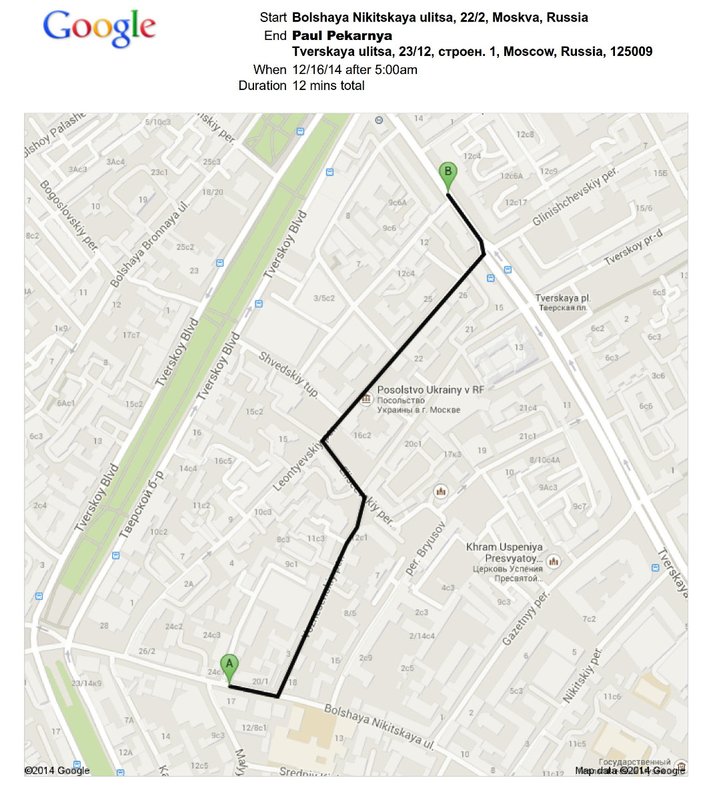 According to Google Map, Paul Bakery was the one closest to my hostel. When the day came, at the last turn to left, I walked, and walked. Nothing seemed like Paul, or Peter. But I was, and still am, certain that I had been walking towards the right direction, because on that left turn there was a bus stop on my right, and walking further left would lead to Tverskaya Boulevard and the Metro Station. 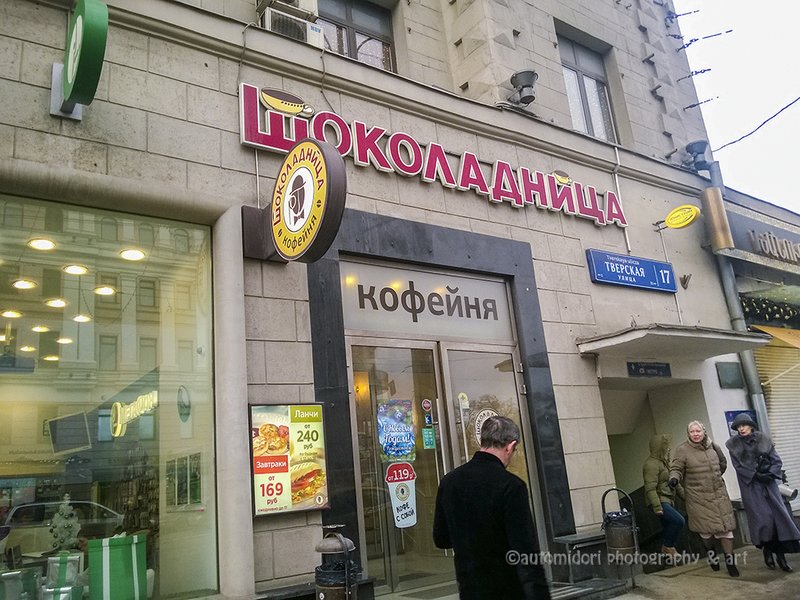 Judging by the scale on the map, this is much further away. Paul Bakery should be very close to the left turn I had made. Whatsoever, this does look like a place to have breakfast anyway. 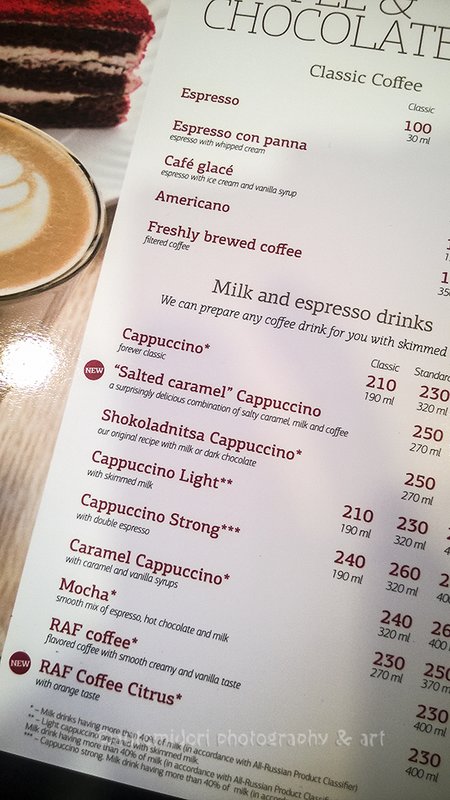 English menu, English speaking waitress. Her English was as good as her service. The other waiters and waitresses were friendly, too. But it seemed that she was the only one who spoke English. 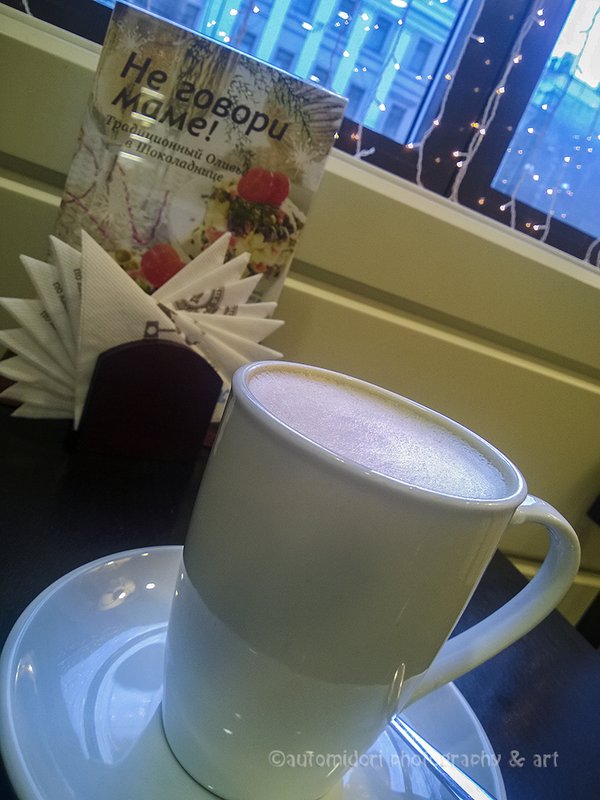 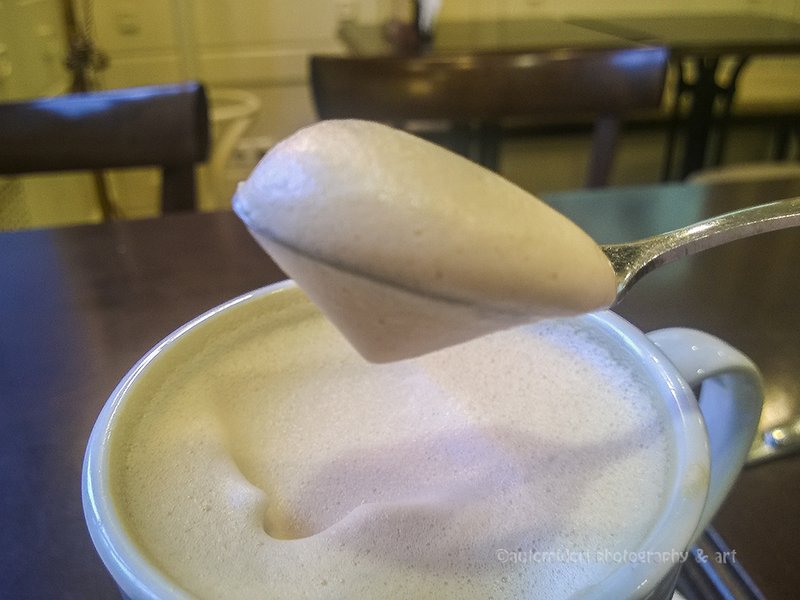 This is the cream of the coffee. "Cream" as in "the cream of the family", I mean. Fabulous. Fantastic. The cream went deep down, just like Russian snow. As there's an expression "to dress accordingly", I wonder if you can say, "to dine accordingly". According to the season of the place.

Sitting on the second floor by the window, watching the street down there... How I wish I had more time in my hands. I would have stayed here the whole day, sipping coffee, writing, reading, savoring on pancakes... 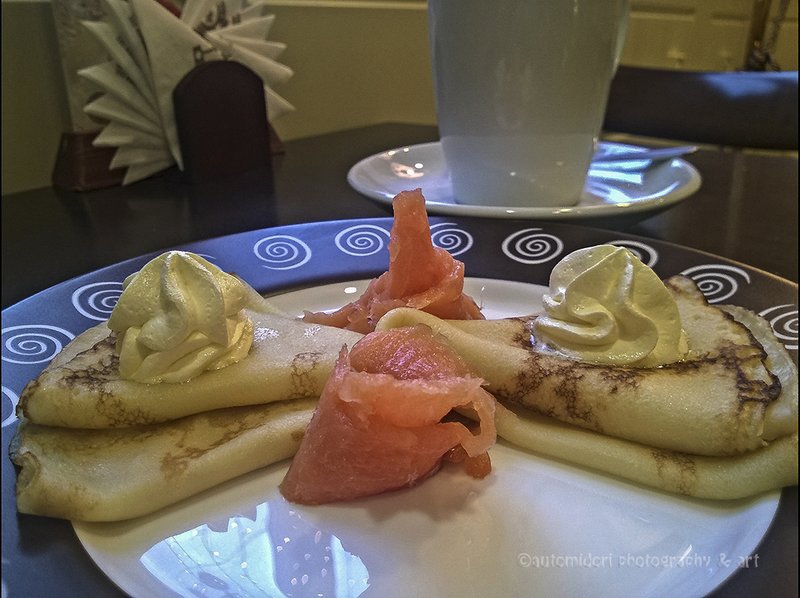 Russian Pancake with Salmon. Raw salmon like the Japanese sashimi. Yummy! All the time I thought raw salmon was Japanese, only.

The Shokoladnitsa Cafe's interior and settings here provided a homey cozy atmosphere. Nowhere on the cover menu, on the wall, on the table, did I find any Cyrillic that would suggest the word "Paul". But I cared no more. Oh, the restroom here was also nice. Fragrant and spacious. Better than my hostel's. Ooops.

At the end of the day, as I walked back to my hostel on Bolshaya Nikitskaya, my heart stopped -- for a second. Hey! This cafe is also Shokoladnitsa! How funny -- and silly -- was it this morning walking all the way to Tverskaya and dine in Shokoladnitsa while there's Shokoladnitsa just a few buildings away from my hostel. 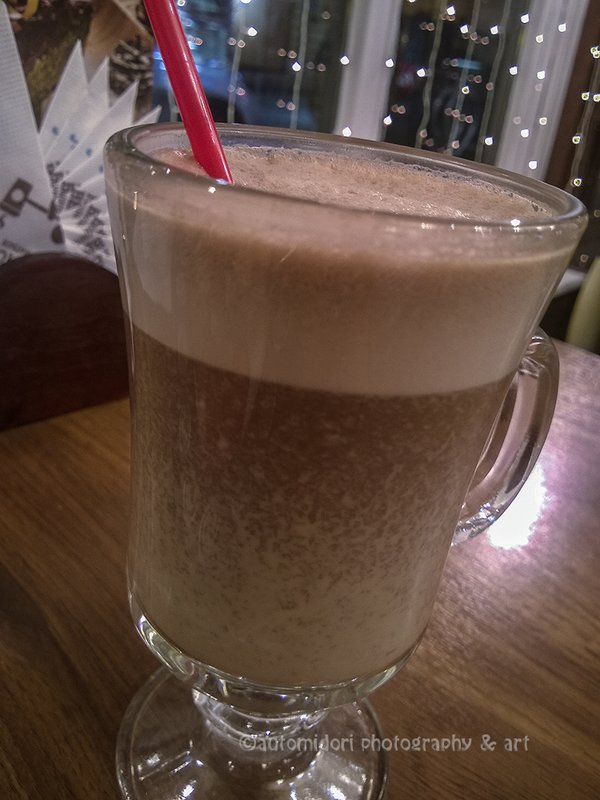 Second round in Shokoladnitsa in a single day. This time with cacao. "Shokolad" means "chocolate". If I'm not mistaken, "shokoladnitsa" Шоколадница means "nice chocolate".

There's one waiter who spoke English in the Shokoladnitsa Cafe here, on Bolshaya Nikitskaya. But, his English wasn't as fluent as the waitress' on Tverskaya. When I asked for an English menu, he said no. I thought it would be impolite to walk out and besides I didn't know where else to go. Other restaurants most likely would be the same. So I prepared my electronic dictionary application, intending to translate the menu. And then... oh! Isn't this the English translation? Under each Russian name of the menu, an English translation was written in tiny letters.

On my further travel, in other cities, I never found again a Shokoladnitsa Cafe with an English-speaking waiter/waitress. Interestingly, every time I asked, "Do you have an English menu?" the answer was always no. But then I would receive the same menu, the one with English translations under the Russian sentences. They could have pointed out on those translations when I asked for an English menu, couldn't they? It looks like they don't understand the words "English menu" and maybe aren't even aware that those tiny letters under the Russian sentences are English. Nevertheless, Shokoladnitsa Cafe became my favorite in Russia ever since the morning of December 22nd 2014. 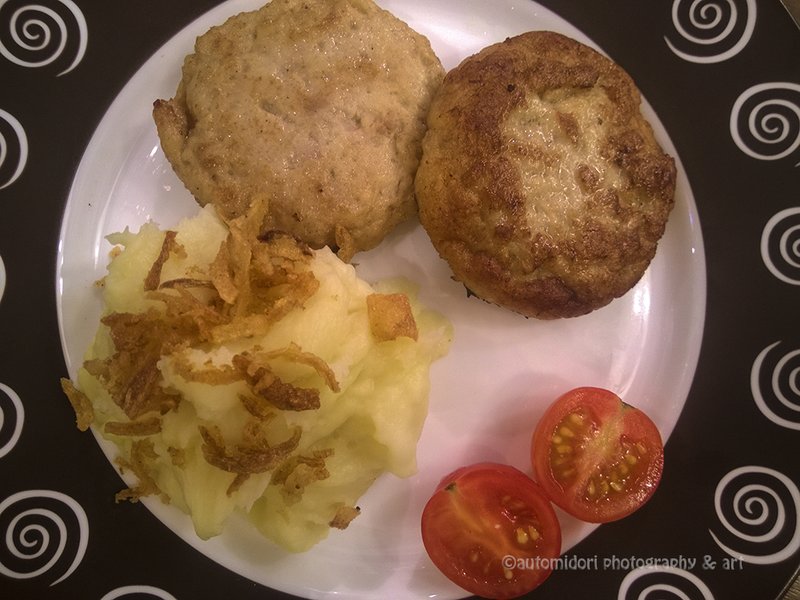