Moving Cuties and Wonders in Khabarovsk

My first intention was following the rattles of tram no. 1 to wherever -- as I use to do in other new places. I didn't know this tram would pass Gagarin Park which I intended to go the next day for the circus. I knew the circus for that day must be over, but the place seemed interesting. So I got off.

Aside from the circus building there was a small arena. Next to the only entrance door was a small ticket box. My instinct told me to follow people buying ticket.

Camels! Bactrian Camels! Here's another dream coming true. For long I had associated camels with extreme hot temperature only. But after my journey on the Silk Road, I learned that camels are equally well made for extreme cold temperature. Then it became my dream to witness camels walk on snow. Although it's yet not a snow-covered desert, Gagarin Park was well snowed. As each of my trip has been a gate to another, this too will be a gate to another dream to come true. 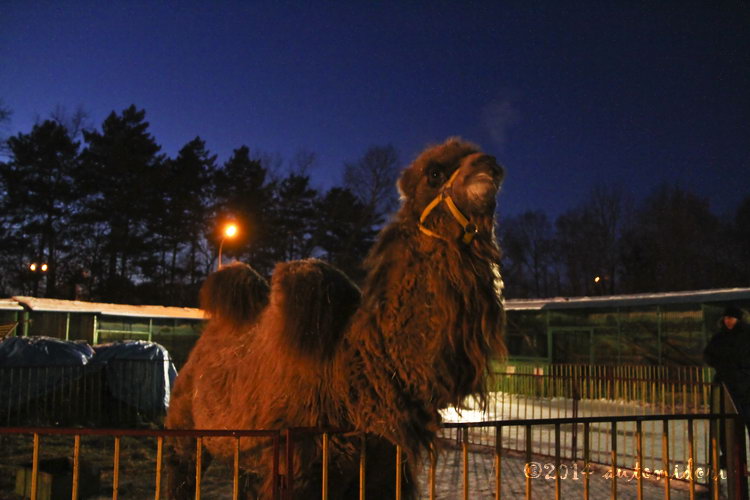 Understanding the facts of a camel, I can't help wondering why one would think God does not exist. A camel is one of the many proofs that God cares. Furthermore, I believe, there wouldn't be the Silk Road, if there weren't camels.

By the way, do you see that white half circled thing in the background of the photo above? That's the roof of cages of various animals, both wild and cute, encircling the whole arena, and there's only one small door that leads outside. 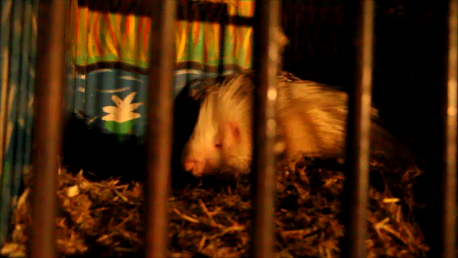 Quoting from Wikipedia:
Porcupines come in various shades of brown, gray, and the unusual white. Porcupines' spiny protection resembles that of the unrelated erinaceomorph hedgehogs and monotreme echidnas.
I didn't know that until I was preparing this post. However, it was the white porcupine which I was most attracted to.

And, White Porcupine read my mind. It gave its butt to me (How impolite!) and stayed behind. But every time I put down my camera, it will walk to the front again.

These are sweet. However, the most impressive one was the reindeer, caged next door. They had enormous gorgeous horns. Their horn's height seemed to be even higher than the height of their body. Unfortunately, due to the minimum light, I couldn't get a clear picture of it. I'm sure they were reindeer, because I typed in the words on the signboard into Google Translate: северный олень and got "reindeer" as result. Interestingly, according to Google, северный alone means "North" and олень alone means "deer". Hence, what is a reindeer? A reindeer is a Northern deer. Checking out Wikipedia, true it is, reindeer's habitat is Northern American and Eurasian. Here's another reason for my fondness of traveling. 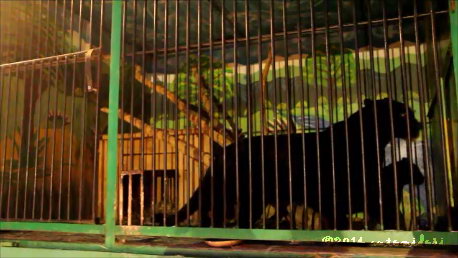 It was my first time seeing a black panther in real life.

I watched Black Panther going up and down the stairs simultaneously wondering, "Doesn't Panther feel dizzy?" 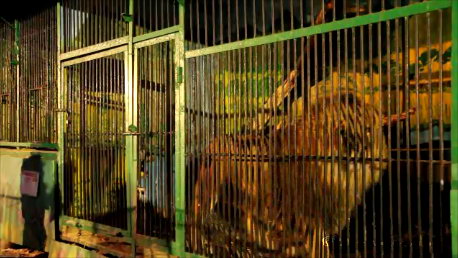 It wasn't my first time seeing a lion for real. However, this fat and furry... I think, it's my first. Wowww.

As the day grew darker and dinner was served, Lion appeared vigorous, energetic, ready for anything. Lion made looong howling calls to... 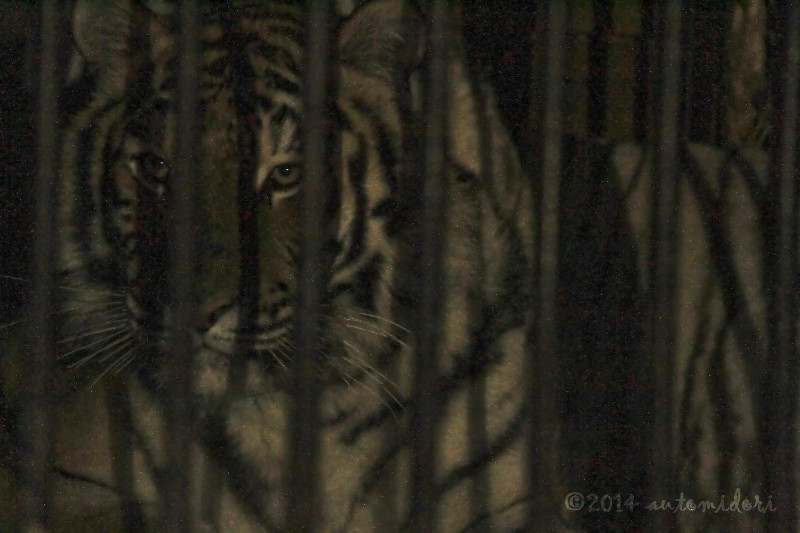 ... Tiger who was caged on the opposite side of the arena. I could feel their eery calls crossing above my head.

One big concern of mine was fellow visitors photographing with flashes on. Isn't flash photography forbidden in places like this? I wondered. In this zoo arena, surely it wasn't, because the zookeepers said nothing. Animals, let alone wild ones, can be hypersensitive to flashing lights. That's what I've learned. I remember also the documentary movie in Animal Planet (or maybe NatGeo). This cowboy show event was in Texas, if I remember correctly. All of a sudden, the horse neighed and lifted up its front legs high up to the air. Taken by surprise, the cowboy lost his grip and was tossed to the air. A video recording then revealed that the horse started to whine right when someone's camera flash fired.

It's general knowledge, I suppose, horses are way friendlier than tigers or lions. If a flash of light can cause a friendly horse throw its master, what more can a lion or tiger do? So when Lion and Tiger kept on howling back and forth over my head, I began to wonder whether they were actually annoyed by the visitors' camera flash. Sure enough their cages are securely locked. But... when one is mad, he can gain strength beyond comprehension, you know. I gazed around the arena and tried to picture how it would look like suppose Lion and Tiger break out of their cages. There's only one narrow doorway to escape. I shuddered to the thought. First, we, the visitors, although just a few, would be tumbling one over another by the doorway at the panic attempt for escape. Meanwhile, in this small arena, for Lion and Tiger, it would take two leaps the max to get over us all. Over our bodies, I mean. Who says I'm brave? I worry many times when I travel. It's just that what I worry about are mostly not what common travelers (tourists) worry -- maybe.

Bye bye, Porcupine. Bye bye, Reindeer. Maybe one day I'll see your relatives but outside captivity. And of course, you too, my dear awesome Bactrian. I walked out through the narrow doorway while I still could. 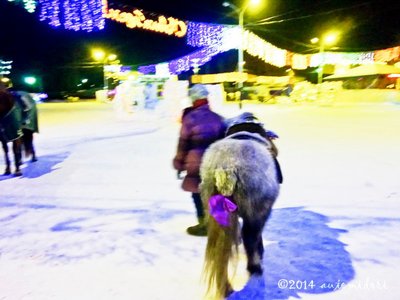 The children's park outside the arena was no less interesting. Except the mini snowmobiles, most of the equipments weren't operating. However, look! 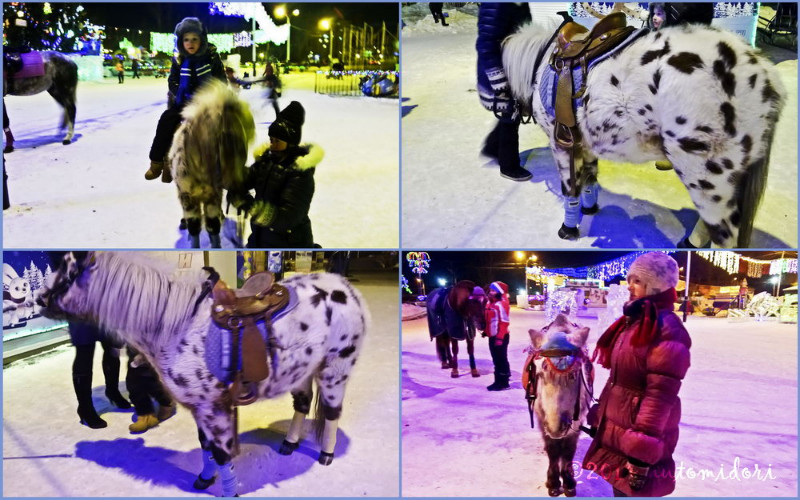 Isn't this cute??? I thought all the cuteness was over. I regretted I had already wrapped my SLR camera with newspaper and tugged it tight inside my bag, I was too lazy to take it out. It was rather difficult to compose this polka-dot -- that's how we call it in my hometown -- plump horse into a sharp frame with my cellphone. How I wanted to make a gentle stroke on this horse's butt. Ih, gemes banget! [Sorry, I don't know the exact expression for that in English.]