Believe it or not!

Instinctively I browsed my former host's website from Krasnoyarsk to check the links listed there. That was how I got to know about this tour I took to the Asia-Europe Border and Nevyansk. I read: "the leaning tower". Wow. That sounds like Pisa Tower, I thought to myself. I ran to Uncle Google for more stories about this Russian Pisa Tower, just in case this tour guide from Yekaterinburg had been making up or exaggerating. After all, business is anywhere, is it not?

Wrong. Had it been a make up story for the sake of tourist business, there would have not been these many references. Surprise. Again, all my life I thought, that Pisa in Italy was the only leaning tower in the world. 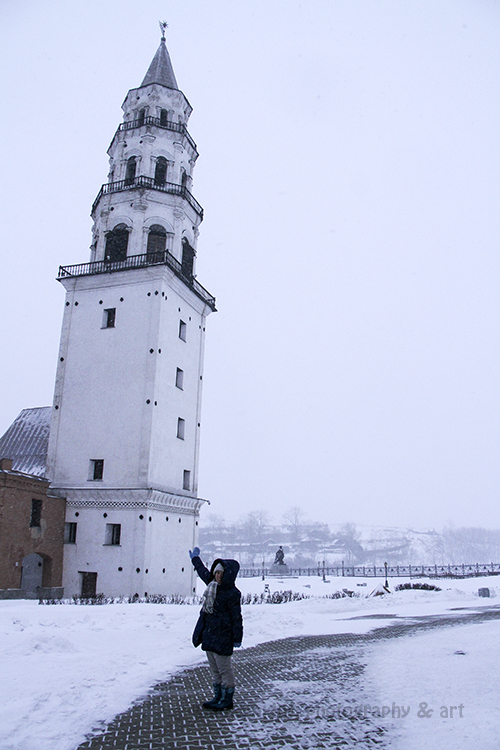 In fact, the leaning tower in Nevyansk carries a more interesting story than Pisa. Oh well, what in Russia has no story?

According to Wikipedia and ICRussia which I suspect is from the same source, stated that Russian historians believe this tower was built between 1721 and 1745 by Akinfiy Demidov, funded by Peter the Great, that Peter who founded Saint Petersburg. However, the architect's name is unknown. Neither is the purpose of this tower certain.

Historians are still debating about the exact purpose of the Nevyansk Tower. Some say that Demidov used it as a "bank safe", others believe it was either a watchtower, or a bell tower, or a prison, or even a laboratory for conducting chemical experiments and producing counterfeit money. Some historians think that the tower was supposed to embody the might of the Demidov family and serve as some sort of an architectural symbol of their dynasty.

1st Floor
Used for "secret work" with the help of shackled serfs, kind of slave which was popular in Europe at that time.

2nd Floor
It was Demidov's office but written between quotation marks.

3rd Floor
Kind of laboratory, equipped with a furnace. A soot sample taken from the flue showed traces of silver and gold in it.

4th to 6th Floor
Stairwells only. But... but, between the 4th and 5th floor, there is a "acoustic room". If a person stands in one corner of this room, he or she can whisper words to another person in the opposite corner and they will be perfectly audible. Scientists still do not know whether the room was built like this on purpose or not. It could be that Demidov used this acoustic room for gathering "intelligence" on his high-ranking guests.

7th and 8th Floor
Houses a clock with a music bell. Demidov bought this from an English master for 5000 rubles while the whole cost of Nevyansk Tower construction at that time was 4207 rubles. The clock has three dials, ten music bells weighing about four tons, and one alarm bell. An alarm bell in the 18th century?

9th Floor
Too bad I could not arrange my itinerary into another way so that I could visit Nevyansk Tower not on a Monday like now. Otherwise, I could have climb up and stand on this 9th floor which served as an observation post.

The legend told also by my tour guide went like this: Right after the end of the construction of the edifice Akinfiy Demidov and the architect went on top of the tower. There, Demidov asked him whether he could build anything better than the Nevyansk Tower. The architect answered "yes", and Demidov ordered him thrown down from the top of the building. The next morning the locals supposedly noticed that the tower had leaned forward a bit and water had started trickling down the walls as if the tower were "crying". Interestingly enough, one can still see some water constantly dripping down the southwest wall of the tower to this day.

Well... if it snows like this everyday, wouldn't water be naturally dripping from the inner inclination part of the tower? Gravity, that is.

The highlight of Nevyansk Tower should be the high technology of the construction. The tower's tented roof was the first cast iron cupola in the world, with a metal carcass and metal outer shell. The second time, this technique was applied only some 100 years later in Germany. The very top of the tower is crowned with a metallic lightning rod in the shape of a gilded sphere with spikes whereas Benjamin Franklin gave his scientific explanation about lightning rod not until 28 years later. 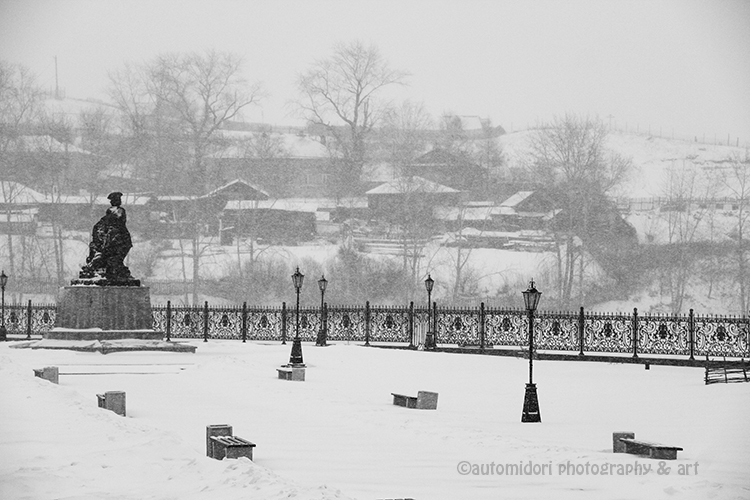 That on the left is the monument of Peter the Great and Nikita Demidov, Akinfiy's father. See those benches? This park in front of Nevyansk Tower is undoubtedly a nice park but in winter. Aha.