I dedicate this post to my fellow circus guests queuing behind me and the ticket lady in front of me. Because of your caring hearts, I could make these pictures and share your wonderful Russian delight. 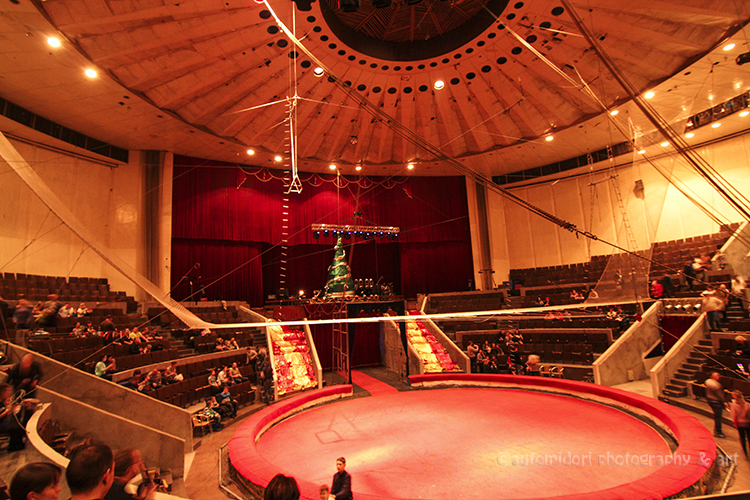 The stadium was maybe approximately same size as the one in Khabarovsk. But the lobby and cloak room was much bigger in Novosibirsk. There was a cafe, souvenir stand, and photo booth with live arctic fox. It was the same kind of arctic fox at Harbin International Ice Festival in China. Apparently arctic foxes love being cuddled in human arms and passed through to another. 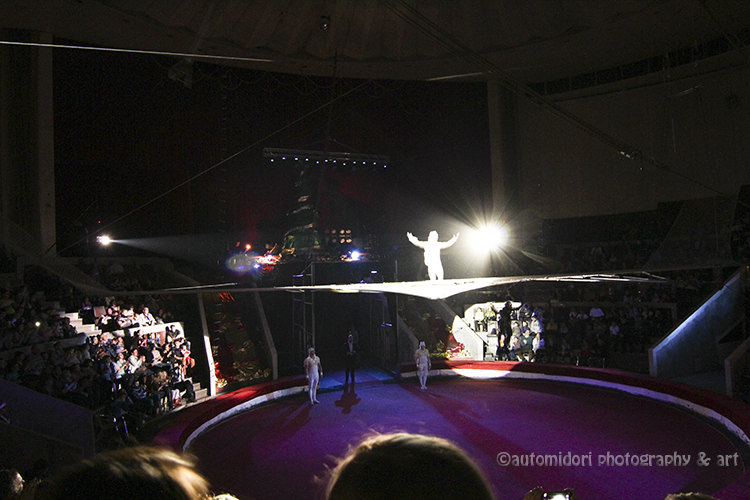 Once again, I got the best seat: Not too high but not too low, and facing the front side. I could view (and take pictures!) what's going on the net but also under. Furthermore, I didn't sit facing a stretched rope or next to the wall. Thus, I could make a clean picture. Many thanks to the lady ticket officer and all Russian fellow guests queuing behind me. There's a story about that.

I was overwhelmed. Novosibirsk is quite a big city and yet contrary to my impression of big cities, the people here are thoughtful. They didn't seem at all irritated that a foreigner had made their long queue even longer. To be noted, the crowd was double the queue to the ballet opera this morning. For me, it's just hopeless trying to explain to a foreigner like me. Why put an effort? Why care??

Now, this sounds like a question, I thought. "Da," I answered to whatever that was.

While laying his hand on my shoulder, he said to the ticket lady, "Houskvousk rousk vousk." in a way like "Okay, give her seat bla bla bla. She said it's fine." 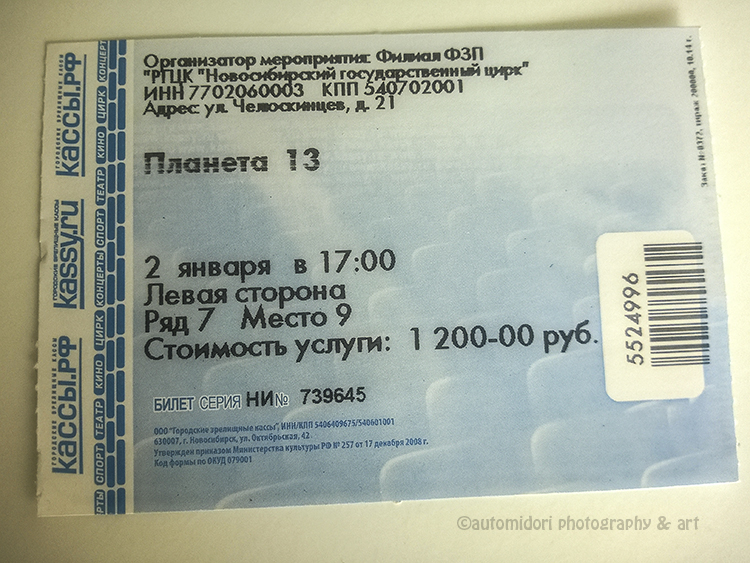 "Spasibo." to the lady and then to the man still standing next to me.

When I turned around, it was hard to believe that they all looked happy at last I got a (good) ticket, instead of looking relieved: "Hah. At last that foreigner is done. Come on I want my ticket."

Maybe that ticket lady was asking me options. So when I simply answered "da", she got confused which one was that "da" for. And I think the fellow guests behind me were helping giving suggestions like, "You better take 'this' because it's 'bla bla bla'."

That, was a simple moment in Russia but to cherish forever.

I'm trying to remember how did I learn that fotografiya was allowed. Anyway, this time no one pushed my shoulder when I aimed my camera like what had happened in Khabarovsk Circus. No officer approached me. And, I wasn't the only one flickering here and there. 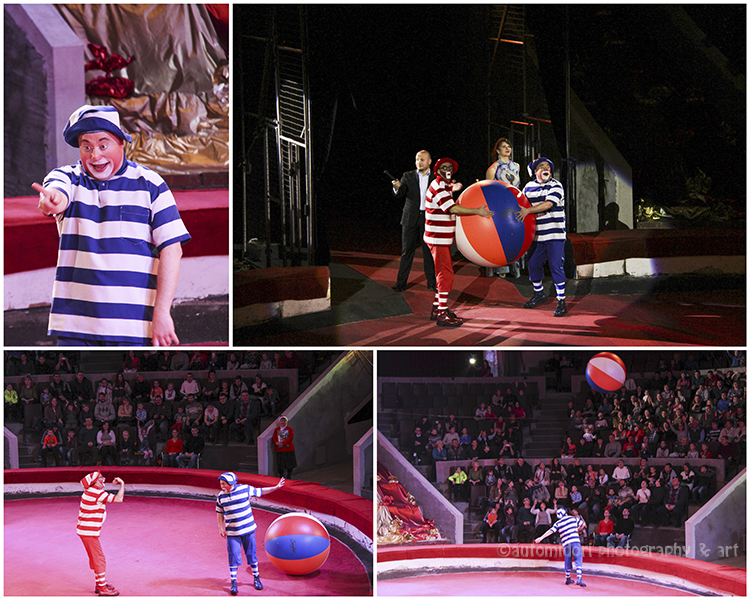 In every circus there must be a clown (s). However, these are exceptional, I'd say. They made good interactions with the audience. 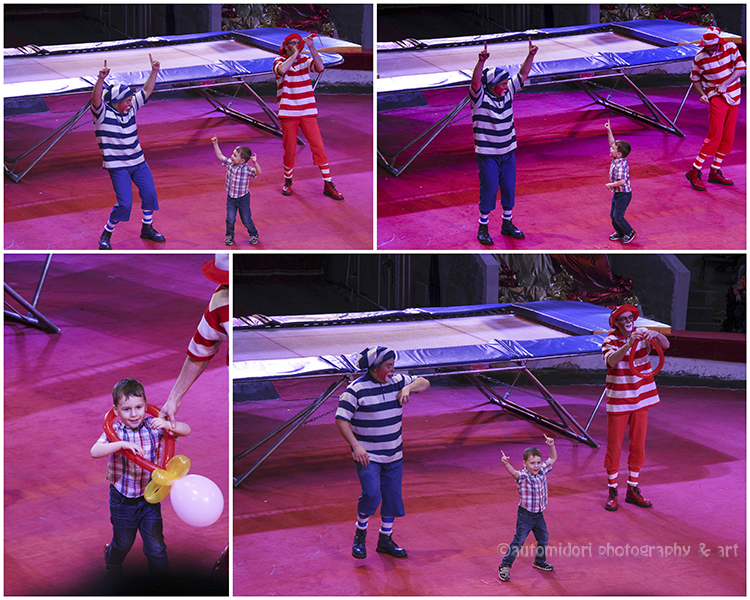 Some kids were invited to perform. This boy, I heart him for his confidence. 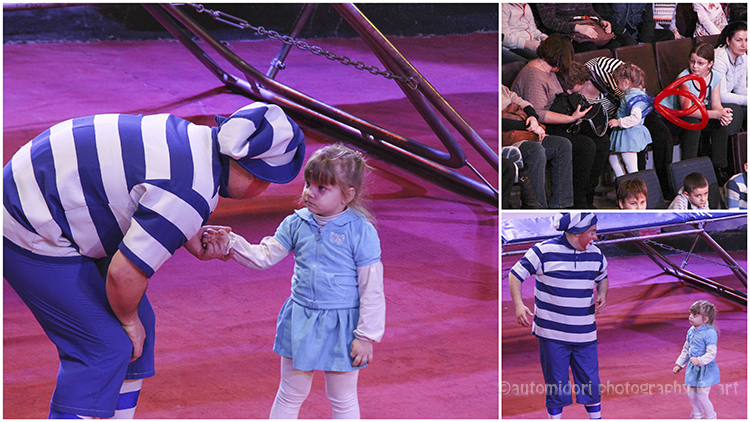 This little girl, so adorable. She was also secure. She just didn't know what to do. Bravo to the brilliant instant idea from the clown. Give her wings and let her fly.

Ah, her son was too shy to accept the clowns' invitation. Thus she took his place, nicely. 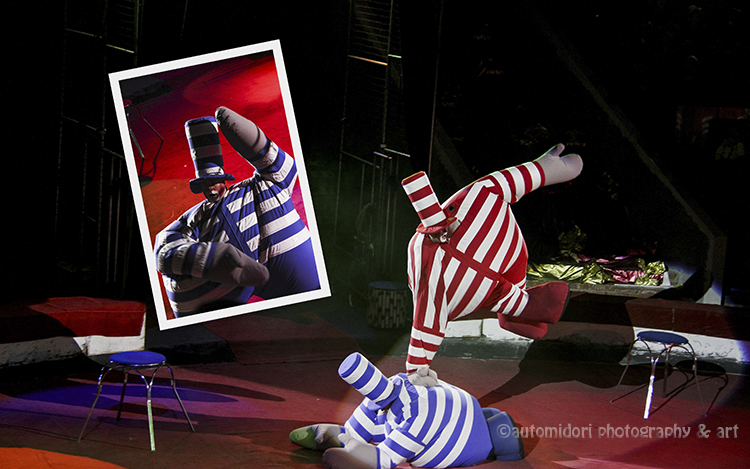 Acrobatic clowns. I have never seen before. 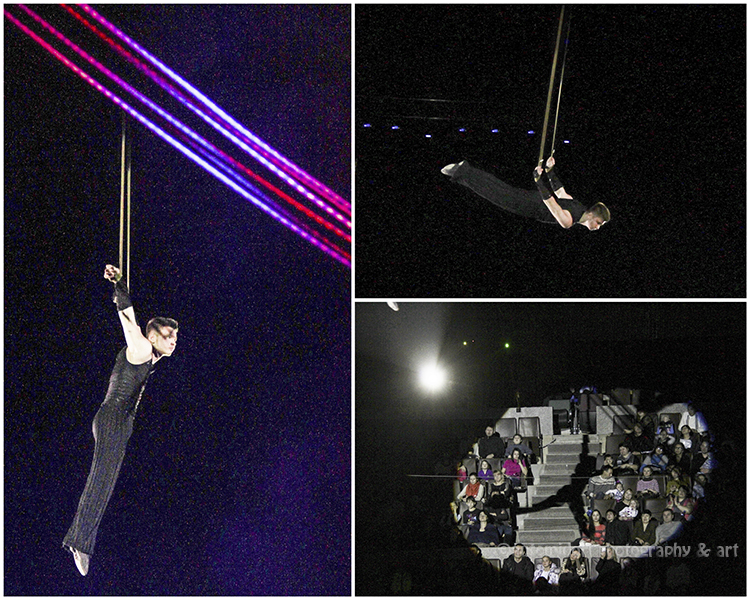 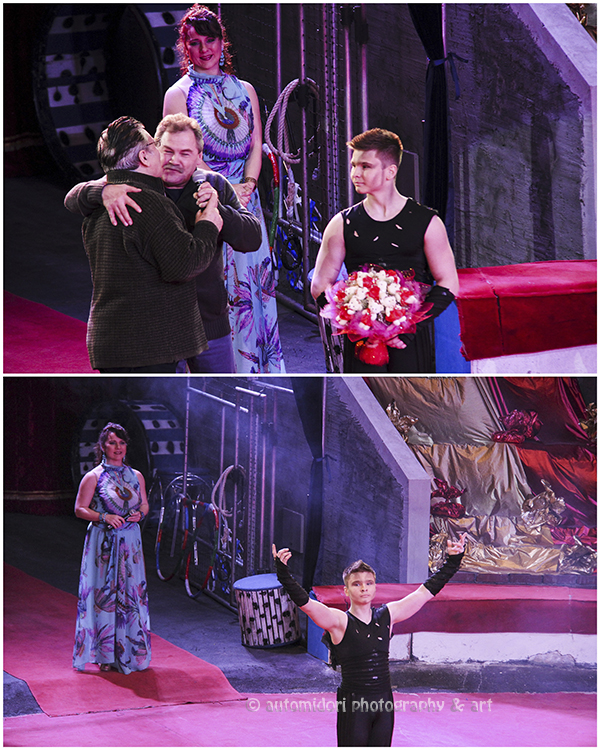 It looks like that he is a celebrated athlete. Lot was mentioned about him and a woman at the back (not the one in this photo) was requested to stand up and be acknowledged. I bet she's his mother. 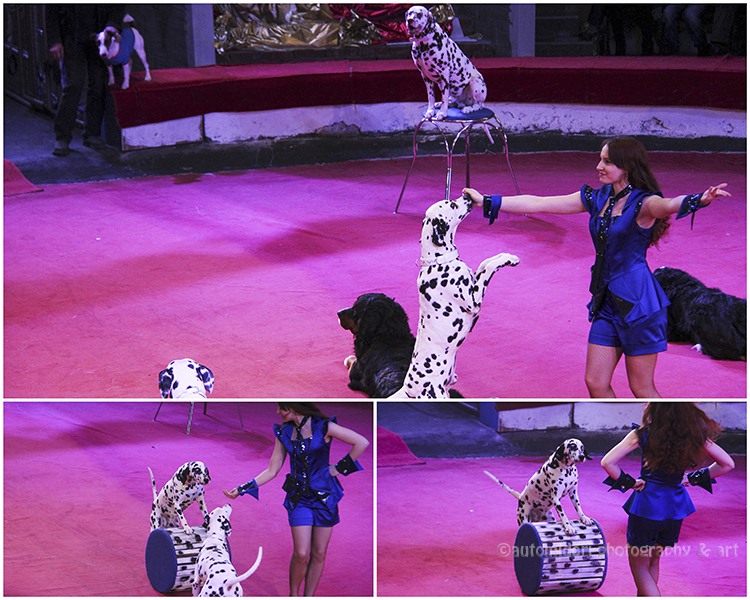 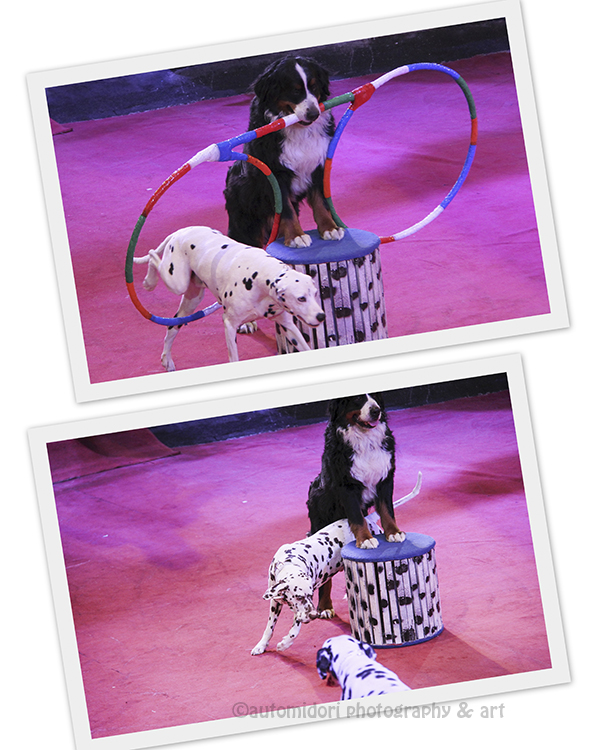 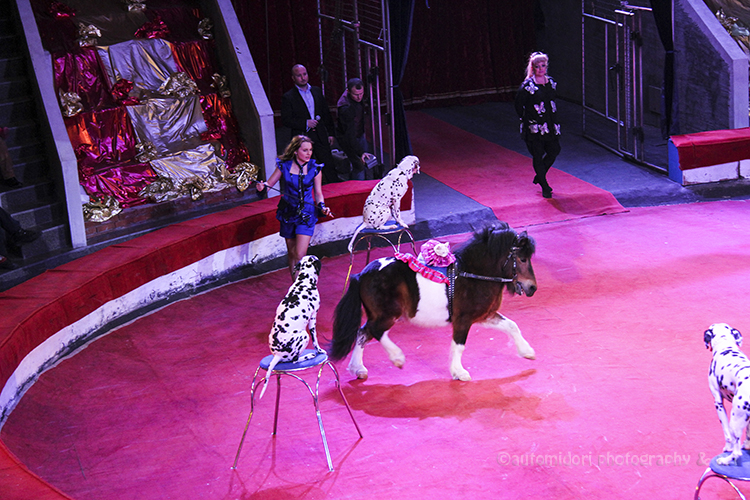 Look at that bundle on the horse's back! 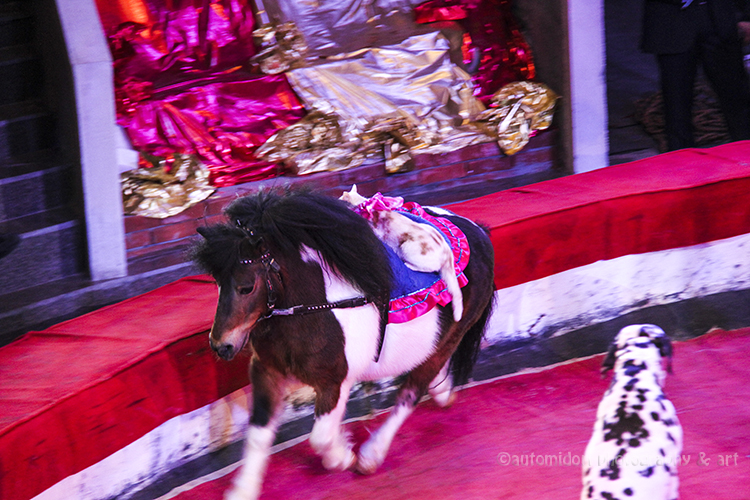 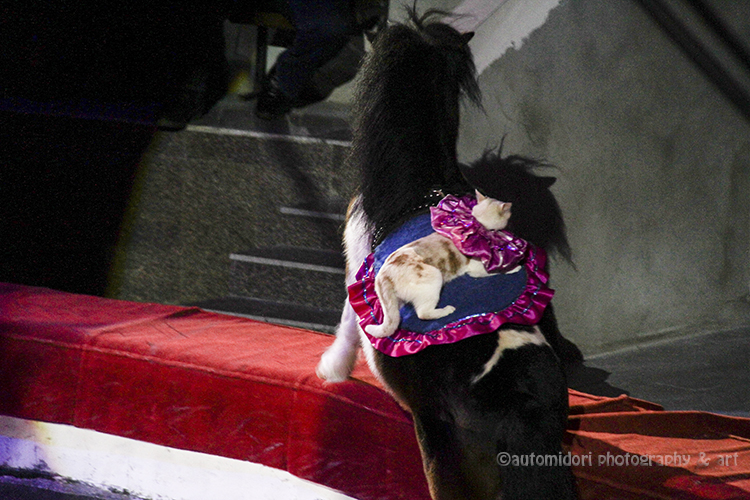 Ahahaha... the cat was struggling to get on the horse's back and not slide down while the horse galloped. 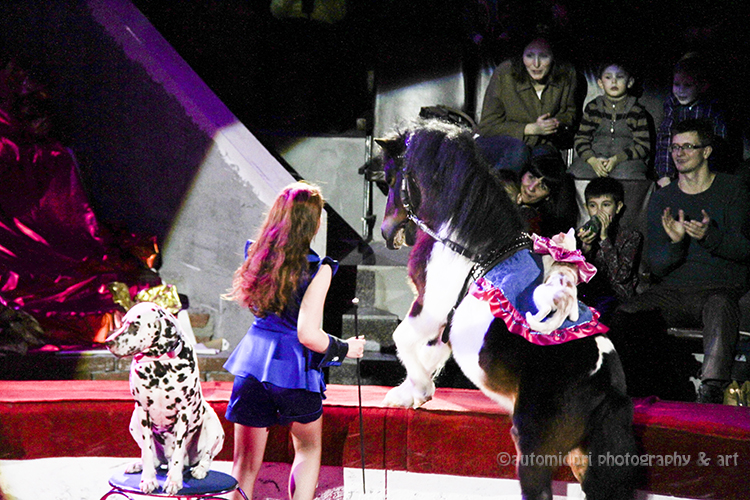 A stop to greet the audience. And they, loved it! 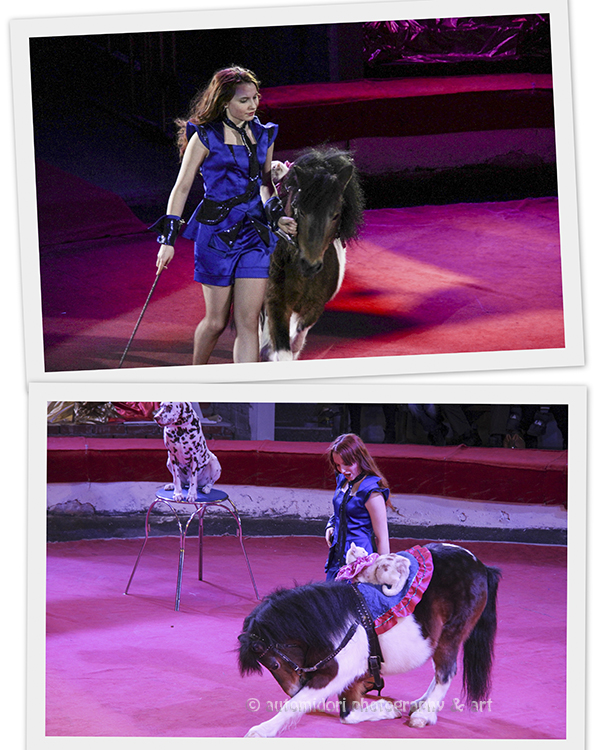 But, she is not done yet. 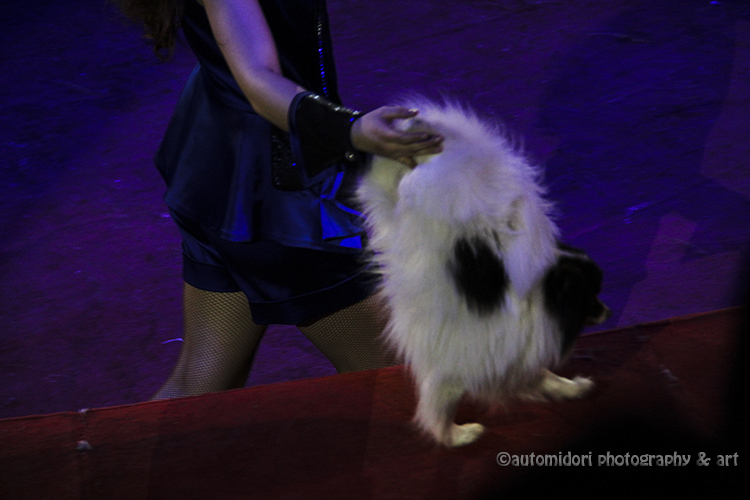 Look! Uhm, I also haven't seen this before. Well, circus in my home country is a once-in-a-blue-moon occasion, regardless of the numbers on your bank account. 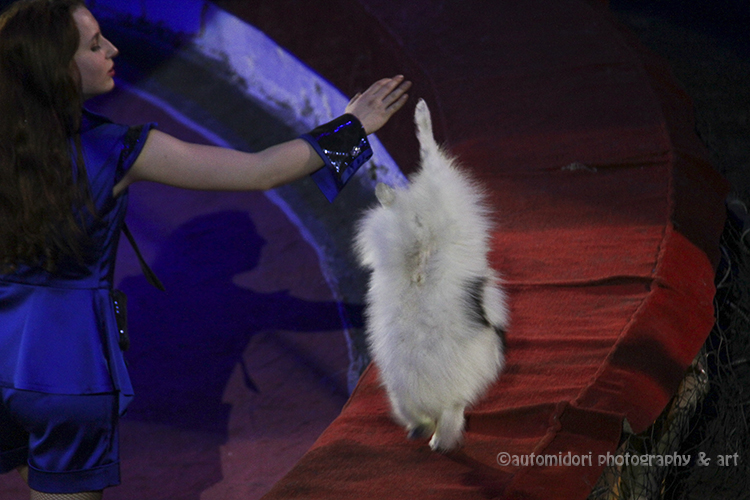 Nevertheless, the whole audience cheered and squeaked along with me, "Awww. Oh. Ay. Oy." 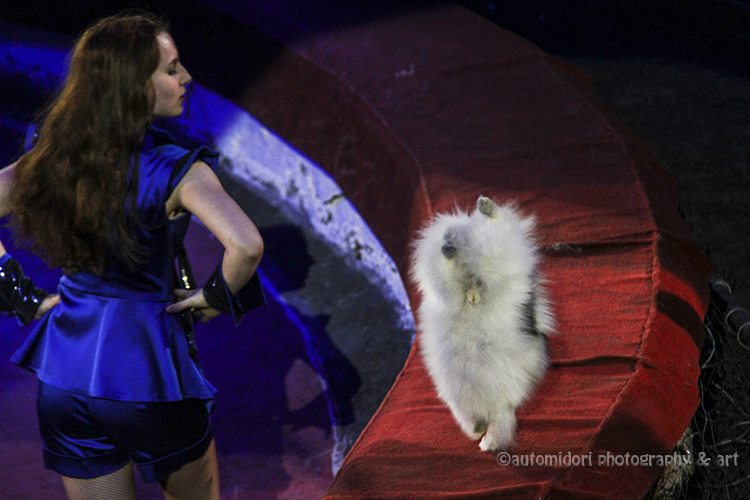 If your pet dog use to play on mud or dirty road, you should train it to walk like this. It would help lessen the number of footprints you would have to wipe off inside your house. 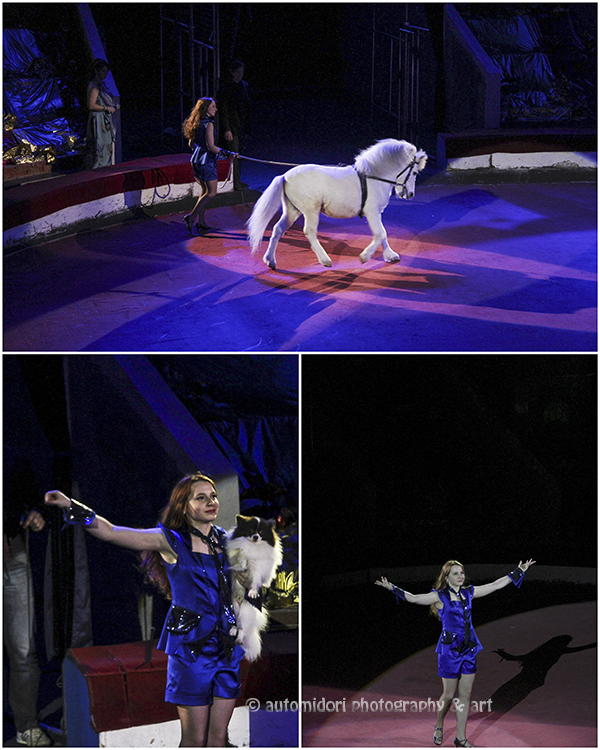 But... but... my pictures from Novosibirsk Circus aren't just that. Please let me show you some more. Da? Da!