It has always been my dearest wish of Russia: Ballet. And yet, Vladivostok, Khabarovsk, Perm, Moscow, Vladimir... every time I checked, no schedule performance matched my itinerary... until today. I woke up especially excited, as if I, was going to perform. Guided by a printed map from Google Maps, I walked to Novosibirsk State Academic Opera and Ballet Theatre but with quicken steps. I can't afford to miss a seat. Yesterday, before going to the zoopark, I had already come intending to purchase an advance seat. Nevertheless, there was nobody. 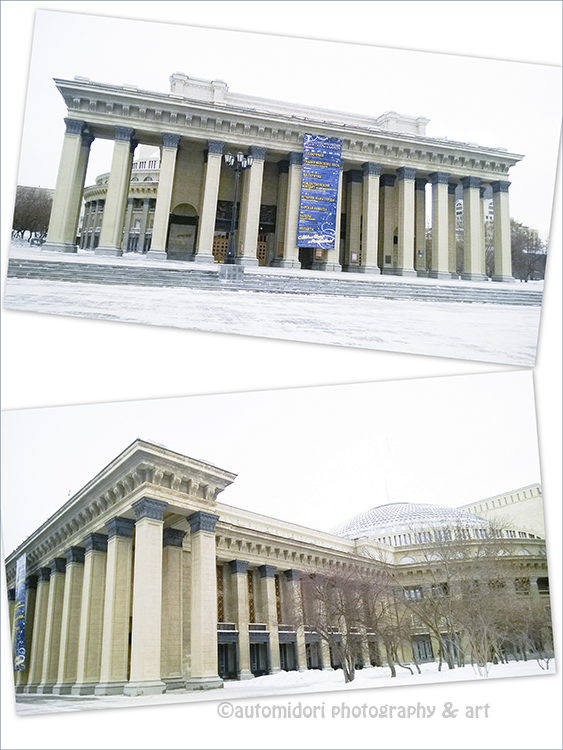 This is it, Novosibirsk State Academic Opera and Ballet Theatre, captured yesterday. But today, two hours before first performance, it was already crowded. A long queue stood behind the ticket box office, and I was really worried.

On my e-Translator I typed: "Please give me a seat in the middle front row. Thank you." The ticket officer was kind. She took the time to examine my smartphone's screen. However, I was rather too late. 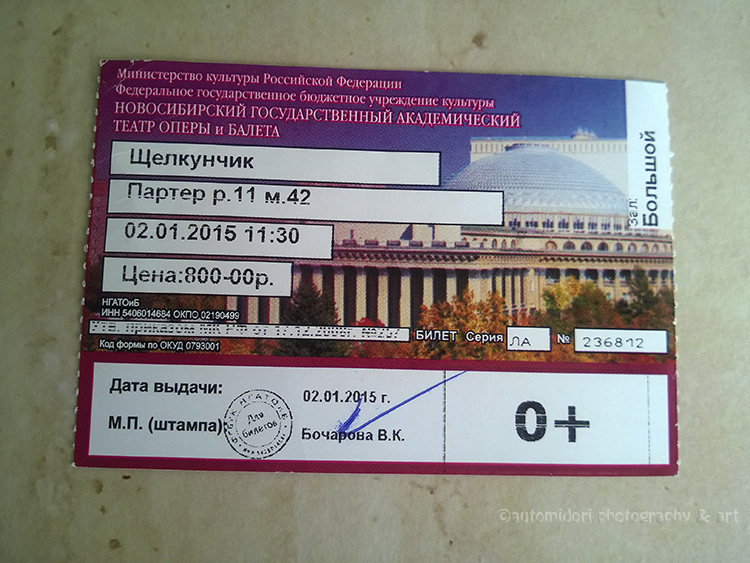 The middle seats were already sold out. I meant to purchase the 1000 RUB or 1200 RUB seat, but the ones left were only the 800 and lower prices. I pressed my two thousand bills under her window, emphasizing that I don't mind to pay for a more expensive seat. Who knows I look poor to her :D

"No more seats," she said, in English!

Behind the next heavy wooden glass door was a broad cloak room with lockers to keep our winter coat and stuffs. Very friendly, a gentleman standing by the door assisted me to the locker, because I didn't understand how the locker worked. He, too, spoke English. I kind felt that he was very pleased (honored!) a foreigner had come to watch the performance. So were the other staffs inside, at the door to the amphitheater when I wanted to make sure from which door I should enter. They all made me feel extremely welcomed. I thought, "You have these so many guests and yet you are happy because of just one me??" 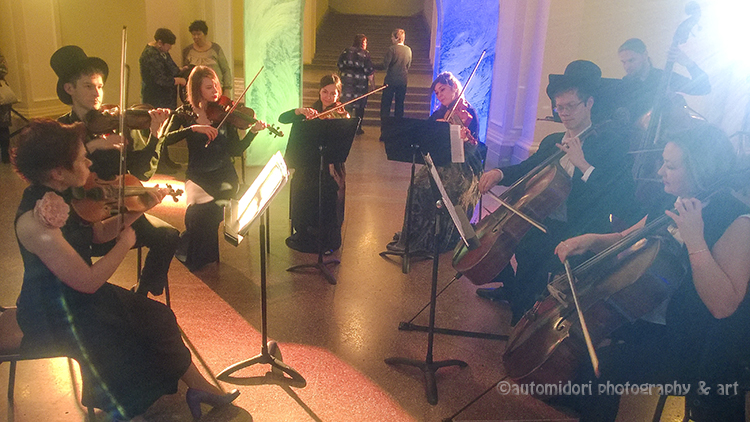 Still at the lobby, my heart leaped with excitement. 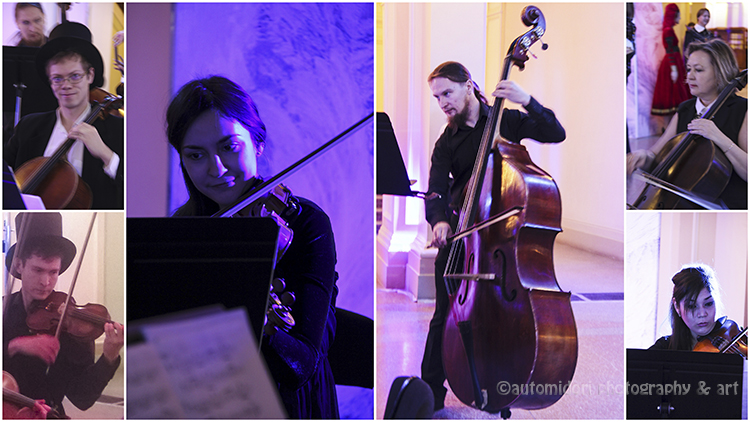 One of them smiled at me as I pointed my lens at him. Opss. I got nervous. My hands trembled. Guess which one. 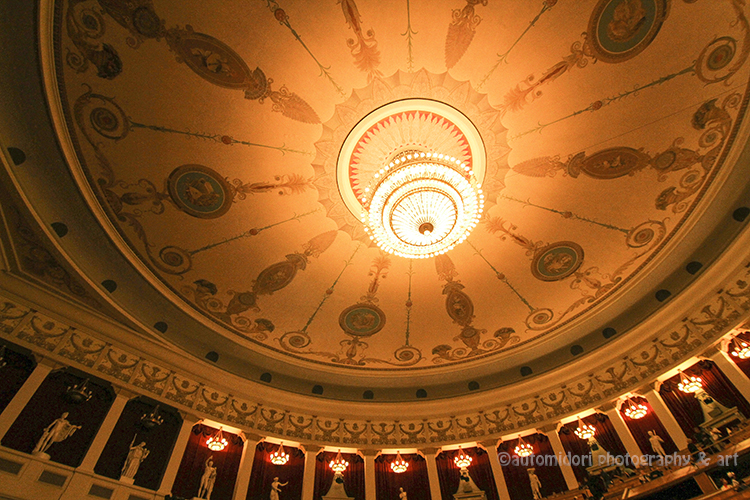 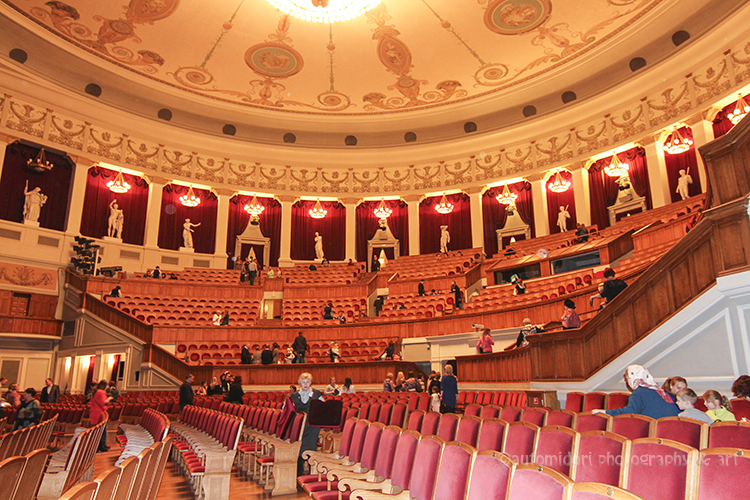 My jaws dropped at the enormity.

When my plane was about to touch down on Moscow, tears filled my eyes. I saw myself as a little girl rubbing my finger over Soviet Union on my globe pencil sharpener. I don't know why of all the countries on the globe, my finger choose Russia. Dad taught me the names of other places on the globe, too. But Russia for me, was special. What's this country like? I wondered. And now, here I am, in that country.

Much more to that, here I am, today, in the largest musical theatre of Russia, about to watch a ballet performance in a few minutes. Privileged, wasn't just enough to describe. 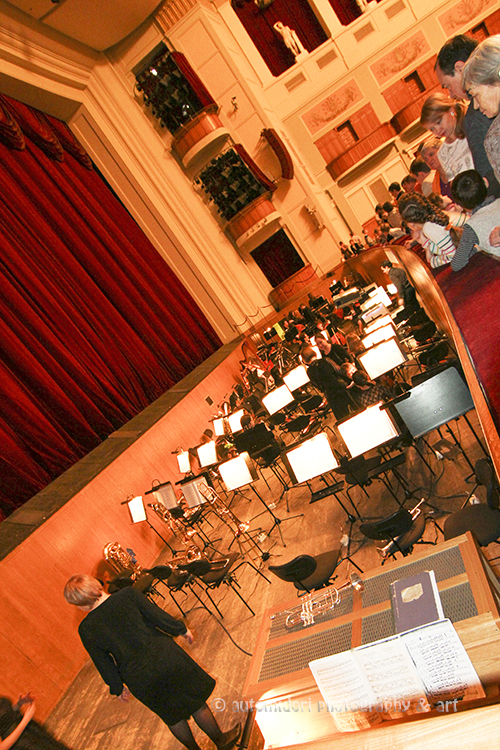 I captured this one during recess hour. I couldn't see them from my seat at the 11th row from front. Probably you can see them from the upper rows, or on the balcony, do you call it so? Before the curtains opened, I heard people clapped their hands, and music began. I was wondering, where's the music? What are people clapping their hands at? Now I know, apparently the orchestra players were making a bow, thus the audience clapped.

However, the upper rows have another downside. The ballet players on stage would look like tiny mini petites, because even from my seat they looked small. In the end, my seat wasn't bad. The ticket officer had been kind to pick up for me the best of the remaining seats. At the lobby I saw binoculars for rent. Sure, that would be needed suppose you get on the balcony, or you'll be like listening to a radio. Aha. 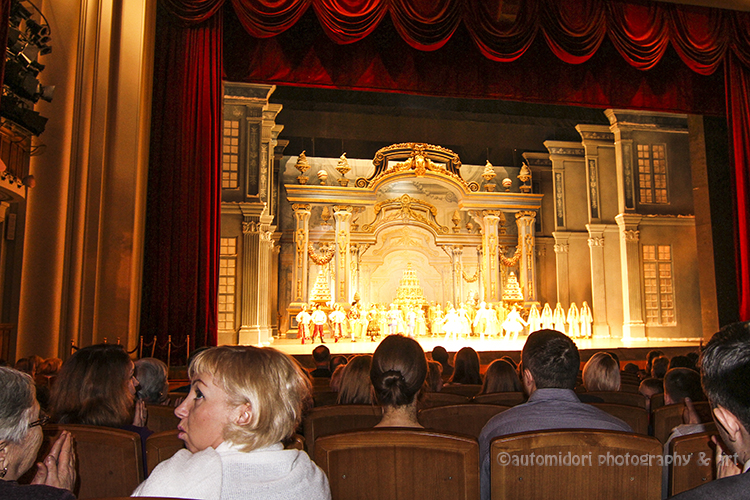 That's it from my seat, taken during curtain call. 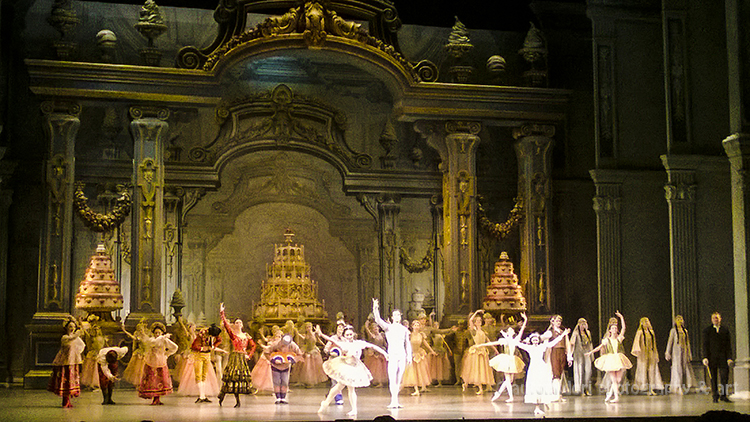 A close up using my cellphone. The performance itself, Tchaikovsky's Nutcracker, was of course not allowed to photograph.

Recess time was a busy time. I had to be quick to decide on what I wanted. Toilet, no need. Coffee cakes, somewhere else, some other time. 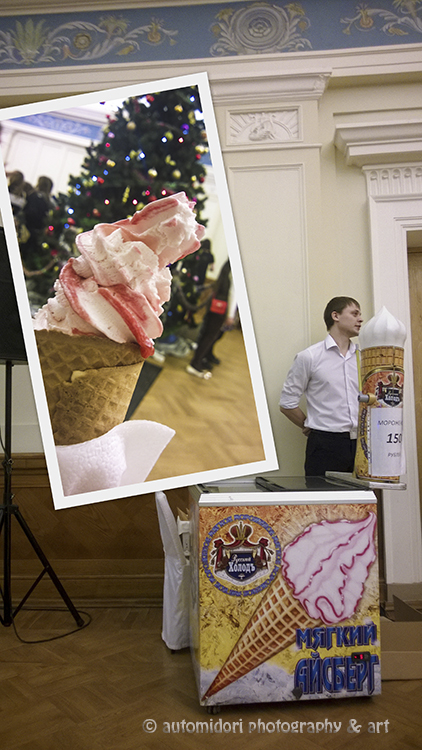 But this, it's not the usual ice cream. I must try. While the other guests' ice cream got a nice pointed curled shape just like the picture, mine (in the inset) was broken. Ahahaha. You know why? I took the vendor's picture while he was filling my cone. Apparently he got nervous and yeah... he missed the shape. I wanted to burst into laughter actually... 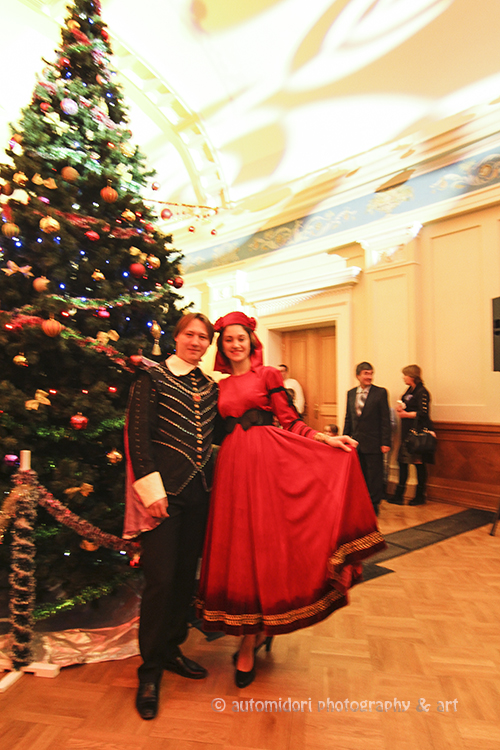 This is just one example. There were several "stars", putting on the 18th? 19th? century's fashion, and guests were excited to have their pictures taken with them. Besides a Christmas tree which is just common thing in Russia, there were other props excellent for a photograph, such as a horse carriage, musical instrument and etc. There wasn't enough time to tour around the details. 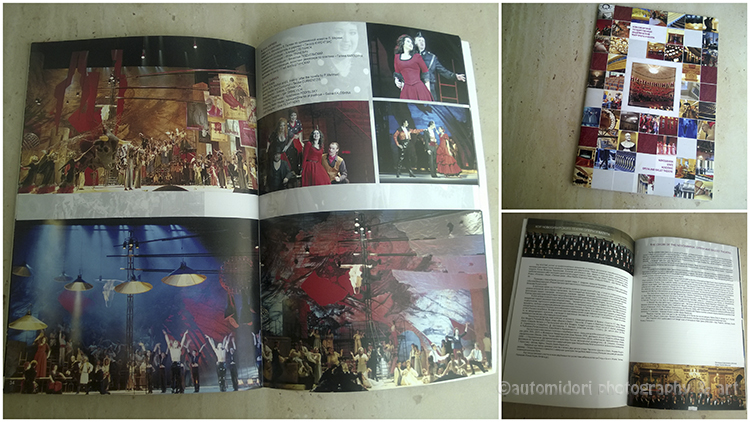 I purchased this for 250 RUB, very much worthwhile. "English, English," said the stand keeper. Yes, this booklet is written in Russian and English, bringing a broad understanding of the history and type of performances with vibrant colors. Luckily I made up my mind quick on this, for the stand was closed when the performance ended. So was the cafe, and everything. Maybe the only thing still opened was the toilet. Ahaha. 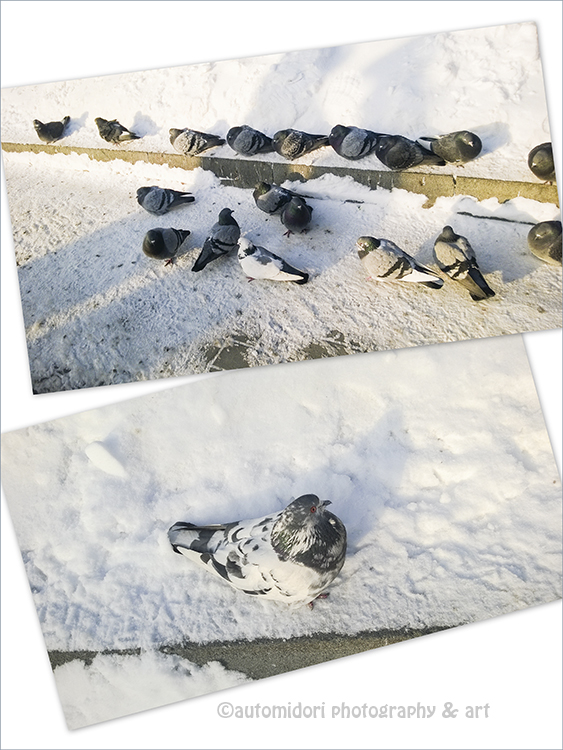 Outside the theatre, pigeons made their own orchestra.

I took a quick lunch at a nearby KFC and rushed to next: Circus. See you there.