May the Lord hear my prayer. Amen. 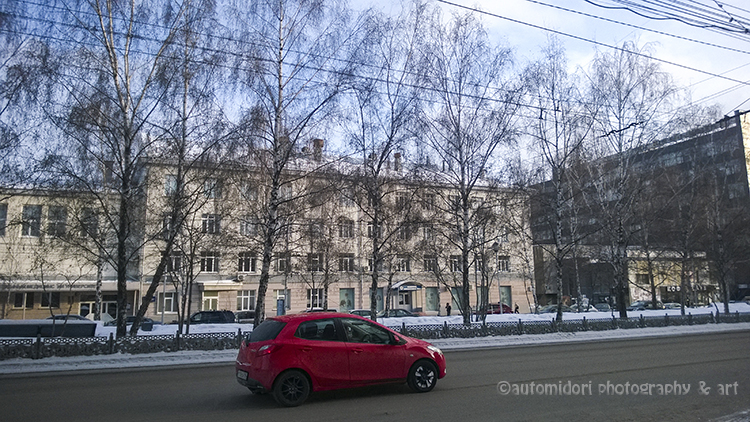 Another something red. Thank you, Car. You have made my click a picture. The streets in Novosibirsk were quiet. It wasn't so last summer. New Year's Eve, I know. Hopefully, IKEA is opened and will stay opened till night. 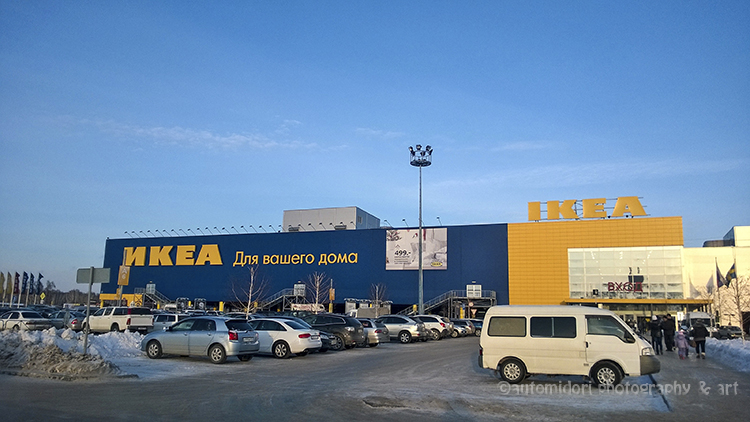 Following the directions on Google Map, I found the bus to IKEA and arrived with ease. Phew! At last! Russian IKEA.

IKEA and the whole mall was widely opened, more vibrant than the color red. Aha. Maybe the streets had been quiet because everyone are here. 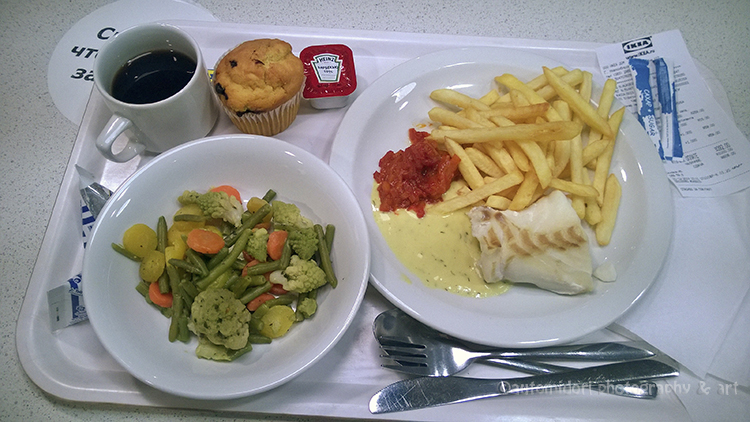 My favorite dish in any IKEA: anything about salmon. And, coffee. IKEA's coffee is always good.

To my extra delight, I found a Body Shop that sold the item which has been years discontinued from Indonesia but still available in other countries, including Russia, apparently. There were 3 tubes on the shelve. I grabbed them all.

To cut a long story short, I got on and off buses and marshrutkas, walked up and down several streets, all in vain. It wouldn't have been that bad, if only my smartphone didn't run out of batteries. Otherwise, I could have checked on HERE Transit application, use my GPS. Why did the batteries wear off? Because I connected my smartphone with IKEA's free WiFi too long. What for? To upload (= brag about) pictures and to reply to comments on Facebook. So, sooo stupid. Then telling that I forgot to carry a power bank with me won't make me look more stupid.

I got off -- for the so many times -- at a corner of a T-junction which seemed rather busy. I waited for a taxi. But every time a taxi passed by, it was occupied. Ah, people are probably busy racing to new year parties; and here I am. Lost. Was I scared? In every inch, yes. I looked around, if there were a hotel, hostel, any kind of accommodation. Luxury or budget, I don't care. At least I would be safe and then ask the hotel to call a taxi for me tomorrow morning. Nevertheless, there was nothing that seemed like a public accommodation.

Suddenly... a car stopped in front of me. "Taxi?" the driver asked.

The car had no taxi sign. But, through previous experiences, in Russia there are taxis seemingly private-owned ones that don't have a taxi sign, and yet were all fine. "Shall I get in, shall I not?" I contemplated.

I showed him the paper with my hostel's address. He took a glance and said something which I understood as, "Fine, get in!"

"How much?" I asked while twisting my fingers signaling the word "money".

He lifted his fingers signaling "two". I took out two hundred notes from my bag just to show him. "Da! Da!" he replied.

I got in. He turned on the radio and moved his shoulders to the music while driving. He smiled, turned his head to me, and I think he asked, "Do you like the music?"

Actually, I didn't. It wasn't classic music. Nevertheless, at this time of my life, why should I care about music? Even if there's a ballet dancer on this window wiper, I wouldn't care! How do you say that in Russian? Hiiiyaaa.

Poor guy, he was like, "Oh, you don't like it." He turned down the volume almost to silent.

And then... he stopped in front of a restaurant.

He drove on. But just a few meters later, he pulled off. I looked around, there was nothing.

As if reading my mind, he turned to me. As if suddenly bestowed the ability to comprehend Russian, I understood him saying, "Give me a second, please. I need to check." He turned on the light near his seat and grabbed a book which appeared to be a map. He looked at my piece of paper, looked at the map, back and forth. "Frunze... " he mumbled. Then it was like he was asking me, "Is it near bla bla bla?"

Oh... if only my smartphone was on, we could communicate through my e-Translator.

However, through the light, I could see on his face that he wasn't pretending. He also didn't suspect that I couldn't speak Russian at all, a complete foreigner. Since there are many Chinese living in Russia, he probably thought I was one of them. Furthermore, I was at a none tourist area at all.

I remembered I read "Krasniya" something before I left this afternoon. How can I tell him that?

"Krasniyaa!!" he screamed. My heart stopped. He accelerated speed, a little.

New York Pizza! That's it! That's it! I told him to turn to the corner of that road. At this point I think he also had been bestowed the ability to comprehend English.

I have arrived. Foxhole Hostel. No mistake.

He turned on the light and turned to me signaling with his fingers "three".

He nodded and his smile didn't wear off while accepting my two hundred notes. But... as I walked to Foxhole's door... to the moment onward... I couldn't help feeling guilty. Hadn't the taxi fare from the train station been 350? This guy had been nice. I was safe. Why should I always insist that people keep their word, no matter what?

Dear Lord, would You pay him back for me, please? Forgive me for being ungrateful.